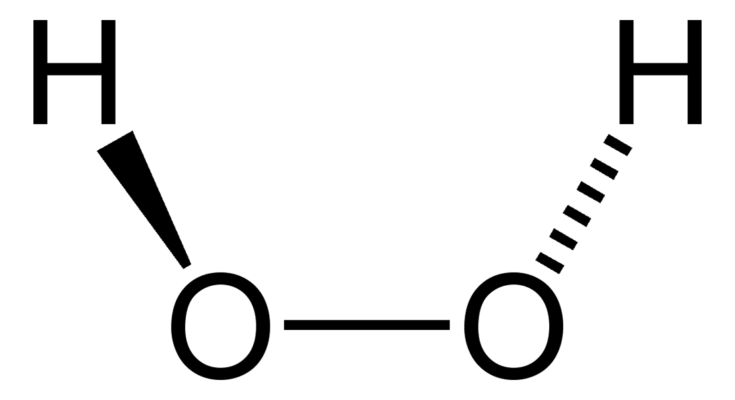 Hydrogen peroxide is a chemical substance with its chemical formula H2O2. It appears as a pale blue liquid in its pure form and colorless in solution. It has a sharp smell.

The H2O2 molecule is made up of only hydrogen and oxygen atoms. In this article, we will study the fundamentals of polarity and will check whether H2O2 is polar or nonpolar.

So, Is H2O2 polar or nonpolar? H2O2 is polar in nature due to its bent shape geometry. The O-H bonds result in a net dipole moment because of the difference between the electronegativity of hydrogen(2.2) and oxygen(3.44) atom. The oxygen atoms being more electronegative becomes a negative pole and hydrogen atoms side as a positive pole with a net dipole moment 2.26 D.

Hydrogen peroxide is also an oxidizer and a bleaching agent. It is easily miscible in water.

In water, it forms a colorless solution due to hydrogen bonding effects between water and H2O2 molecules.

But, in the pure state, hydrogen peroxide exists in light blue color. It is a nonpolar molecule consisting of hydrogen and oxygen atoms.

If we talk about the molecular mass of H2O2, it can be calculated as below

This chemical was first synthesized by scientist Alexander von Humboldt in the year 1799 as a byproduct.

Before moving ahead to check the detailed reason for the polarity of hydrogen peroxide. Let us study what polarity and non-polarity actually means.

In laboratories, it is prepared by acidification of barium by sulfuric acid, and excess water is removed by evaporation.

Contents show
Polar versus Nonpolar Compounds
Why is H2O2 a polar molecule?
Important points to check the polarity of a compound
Lewis structure of H2O2
Properties of H2O2
Uses of H2O2
Conclusion

The molecules are connected to each by different kinds of bonding forces like ionic, covalent, hydrogen bonds, etc.

The molecules that are connected by ionic bonds are always polar. This is because of the electrostatic forces of attraction caused by the two poles generated across the molecule.

And if the atoms in the molecule are connected by covalent bonds and atoms have the same electronegativity, the bond formed is known to be non-polar.

Polar Compounds: The chemical compounds in which positive and negative poles are generated are known as polar compounds.

These compounds have positive and negative poles because of the unequal electronegativity of atoms connected to each other.

If we look at the geometrical shape of polar molecules, it is distorted or asymmetrical. Examples of such polar molecules are BrF3, HCl, etc.  Have a look over the reason for the polarity of BrF3.

Nonpolar Compounds: The nonpolar molecules are those in which no opposite poles are generated. In these molecules, atoms share an equal proportion of charge.

The bond formed by these compounds is always covalent. The electronegativity of atoms forming a nonpolar bond is also the same so that no atom can share a larger proportion of charge.

If you check the geometrical shape of nonpolar compounds, it turns out to be symmetrical.

In case, if the electronegativity of atoms is is equal and the molecule contains a polar bond within it, then such dipoles get canceled out by each other due to the symmetric shape of the molecule.

Few examples of nonpolar compounds are CBr4, Cl2, etc. Here is the article on the reason for the non-polarity of CBr4.

Why is H2O2 a polar molecule?

Greater the difference between the electronegativity more is the polarity.

The net dipole moment of the overall molecule turns out to be around 2.26 D. The distorted shape and the electronegativity of oxygen and hydrogen atoms are responsible for the polar nature of the H2O2 molecule.

Important points to check the polarity of a compound

There are various points to check if a chemical compound is polar or nonpolar. Let us check these points in detail.

Dipole Moment of H2O2: The dipole moment of a molecule is a measure to check its level of polarity.

It is the mathematical representation of the polarity of a molecule. It can also be defined as the product of the charges on atoms and the distance between the centers of charges on both atoms.

The asymmetric shape of H2O2: The shape of the H2O2 molecule is distorted as both O-H bonds lie in different planes like an open book.

Unlike CO2, the H2O2 is distorted and the resultant dipole is directed towards the oxygen atom.

Below is the geometrical shape of the H2O2 molecule.

The oxygen and hydrogen atoms differ in their electronegativity. As a result, the H-O bond is polar.

Oxygen being higher electronegative attracts the bonded shared electrons towards its side and gains partial negative charge and becomes a negative pole and hydrogen as a positive pole.

The lewis structure of a chemical compound is the electronic diagram of its molecule depicting the arrangement of electrons shared by atoms.

It shows the number of lone pairs and the valence electrons of atoms participating in the formation of the molecule.

The valence electrons of oxygen are 6 and it needs 2 more electrons to complete its octet. Whereas hydrogen atom has a single electron in its outermost shell and requires 1 more electron to get stable.

Below is the image of the lewis structure of the H2O2 molecule.

Hydrogen peroxide consists of 2 hydrogen and 2 oxygen atoms and the shape of the molecule is nonplanar ie; open book with O-O spin.

The electronegativity difference between atoms of oxygen and hydrogen makes the O-H bond polar and due to distorted shape, the dipole moment of the molecule is directed towards the oxygen atom with an overall dipole of 2.26 D.