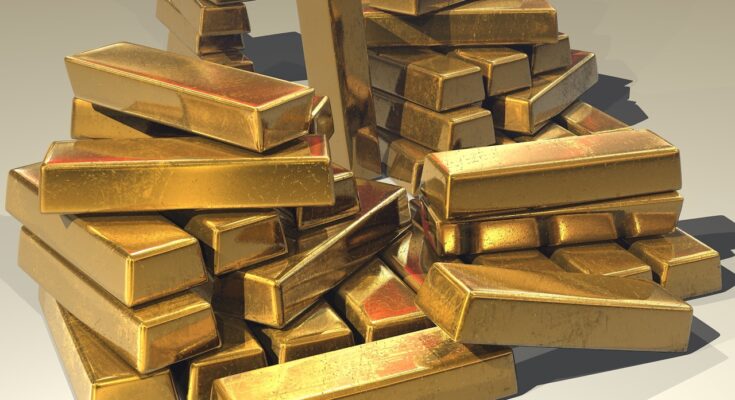 Gold is one valuable and expensive metal whose magnetic property is of massive contemplation for many researchers, around the globe. As we know, all the elements of the periodic table have to show one out of paramagnetism, diamagnetism, ferromagnetism, and superconductor.

Gold has decided to show an anomaly of being strongly diamagnetic and weakly paramagnetic in nature. It is because there is no reason why an element shows specific behavior. It makes chemistry full of exceptions. We can only study how?

As the electronic configuration of gold has the presence of unpaired electrons, it shows an anomaly of being diamagnetic in nature where it should have been a pure paramagnet.

Let us understand this anomaly in more detail

Contents show
Electronic configuration of the Gold (Au)
Why does Gold strongly repel a magnet?
Why is Gold magnetic in nature?
Magnetic Susceptibility of Gold
Is Gold a Superconductor?
Is a Gold alloy magnetic?
Will a magnet pick up Gold?
Some other questions
Conclusion

Electronic configuration of the Gold (Au)

The atomic number of gold is 79 and lacks only one electron to achieve all paired up electrons.

From the above image, the predicted version states 6s shell to have two electrons while 5d to have nine electrons.

It is an ideal condition that does not happen in reality as each electron wants to achieve a stable condition.

Why does Gold strongly repel a magnet?

As we know, it is essential to fill up the d shell for the electrons first to achieve a lower energy state.

It is because d shell provides a lower risk of electron repulsion in comparison to s shell.

You will find a lack of one electron in the 6s shell, ideally making it a paramagnet.

So, gold should strongly attract a magnet in the presence of an externally applied, which does not happen in reality.

Due to filled d shells, gold reaches a much stable condition and responds only to high to a very high externally magnetic field by strongly repelling a magnet present in it.

Also, gold is weakly paramagnetic as well in extreme conditions.

Why is Gold magnetic in nature?

All elements of the periodic table possess magnetic behavior where some have strong affinity while others have weak and show it only in the presence of an externally applied magnetic field.

The gold belongs to the second category. As we know, the paired electrons spin in opposite directions canceling out the net dipole moment.

A d shell is of lower state energy a filled shell, will bring the atom to a stable condition with no net dipole moment.

As a stable element will always repel any change to it, so gold being a diamagnet strongly repels any change and does not respond to even a weak externally applied magnetic field.

It is equally important to understand that presence of one unpaired electron in the 6s shell makes the lone electron a “tiny magnet” creating a dipole moment.

As there is only one lone electron, the paramagnetic attraction created by it is way too weak, which is next to negligible.

More than one gold atom can pair up the lone electrons reaching a completely diamagnetic state.

Magnetic susceptibility is a method of calculating the extent of magnetization of an element in the presence of an externally applied magnetic field.

A negative value of gold determines weak magnetic susceptibility meaning it does not respond or react with efficacy.

It shows that the gold needs a very high magnetic field to show some alteration in its behavior.

Is Gold a Superconductor?

No, gold is a perfect conductor as it is a great conductor of electricity. But, due to the presence of one lone electron, gold cannot follow the Bardeen-Cooper-Schrieffer (BCS) theory.

To be a superconductor it is mandatory to have all paired electrons within the atom, having no lone electrons at all.

The conductor posses finite resistance whereas the superconductor has zero resistance.

Is a Gold alloy magnetic?

Yes, depending upon which element has been used to make an alloy with the gold.

As we know each element posses some affinity to an externally applied magnetic field, the extent of response will depend on the properties of the element used along with the gold.

Imagine alloying gold with iron, what will be the magnetic behavior of the alloy?

The presence of more than twenty percent of iron will make the alloy a magnet only. It will start attracting magnet with no need of applying a magnetic field externally.

Will a magnet pick up Gold?

No, if you bring a magnet near a piece of gold, nothing will happen.

But, if you keep a piece of gold within an electromagnet it will create a magnetic flux.

To try this out in an easier manner, make a coil from a gold wire and run a high voltage electric current through it.

It is interesting to realize that simply moving a piece of gold near a magnet will not do anything. We need a large magnetic field to see gold responding to it, slightly. 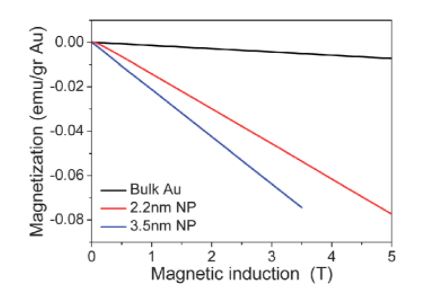 It shows the values at which gold and the other two samples will induce dipole moment at different magnetic induction values.

It is interesting to see gold following a linear burgeoning around 0.00 emu/gr AU (quite closer to its magnetic susceptibility value).

What is the Bardeen-Cooper-Schrieffer (BCS) theory?

This theory provides a phenomenon through which the paired electrons flow current without any resistivity within the elements at low temperatures.

The electrons need to be paired within the atom. An element needs to follow BCS theory in order to be a superconductor.

What is the magnetic flux?

What is magnetic induction?

It is behavior by which an element generates a dipole moment in the presence of an externally applied magnetic field. It is interesting to realize each and every element from the periodic table can be magnetized.

How magnetic susceptibility is different from magnetic permeability?

Magnetic susceptibility is more of an ideal condition.

Whereas, magnetic permeability gives a more accurate value of how much an element can be magnetized by calculating the total magnetization of material and volume both.

You can also check out an interesting article on the tarnishing of gold.

Gold is one exception like copper which has an unpaired electron in its atom and showing strong diamagnetism which in opposite should have been a paramagnet. Though the paramagnet behavior exists, the intensity is not too high and usually ignored.

Another reason for it can be when two gold atoms react, the complete electronic configuration of one another. Gold shows magnetic behavior only in the presence of an externally applied magnetic field. Otherwise, gold never attracts a magnet at a normal condition or room temperature.