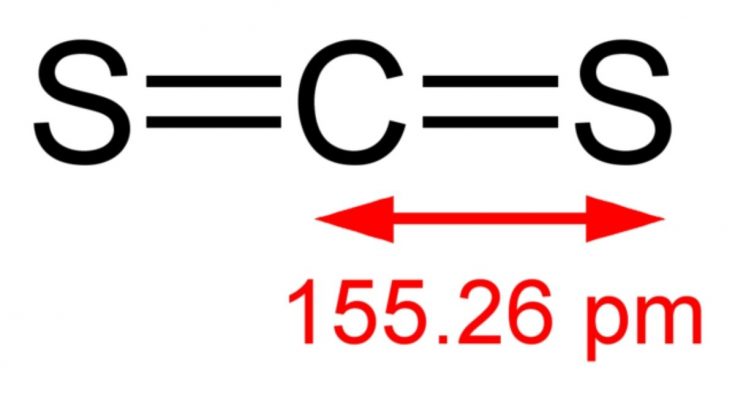 Carbon disulfide, also known as carbon bisulfide or disulfide carbon is a chemical name for CS2, which consists of carbon and sulfide ions.

Carbon disulfide is a colorless liquid having a pleasing smell, somewhat similar to chloroform. In contrast, impure carbon disulfide, typically utilized in several manufacturing purposes, is a yellowish liquid with a disagreeable odor, similar to rotten vegetables.

Carbon disulfide volatilizes at normal temperature, and the vapor is two times heavier as compared to air. It implodes in the air and quickly catches fire.

So, what do you think about the bonding between the sulfur-carbon-sulfur bond?

Since we are discussing the possibility of an ionic bond or covalent bond in CS2, let us dive more into the details about an ionic and covalent bond.

A covalent bond is produced by the equal sharing of electrons among the participating atoms.

These bonds are mainly formed within nonmetals or among the same elements.

However, the transfer of electrons among two atoms having comparable electronegativity will not occur from their outermost shell; rather, they will share electrons to fill the valence electron shell.

1. First is the sharing of electrons among similar atoms, like in the case of H2, O2, etc.

2. The other way is the sharing of electrons among different atoms, as seen in H2O, SO2, and CH4. Read out the article on the covalent nature of SO2.

Considering the electronic configuration of the carbon atom, it demands to accept or donate four electrons to achieve stability, which appears unlikely as:

1. A carbon atom can’t accept four electrons, as it would be difficult for six protons to have ten electrons, and therefore the stability of the carbon will be disturbed.

2. In the same way, carbon can’t donate four electrons, as it would need a huge quantity of energy to eliminate four electrons. Besides, the C4+ would hold just two electrons by proton, thereby making the carbon unstable.

The covalent bonds have various categories depending on the number of shared electrons.

What are the different types of Covalent Bonds?

Based on the number of shared electron pairs, the covalent bond can be categorized into: 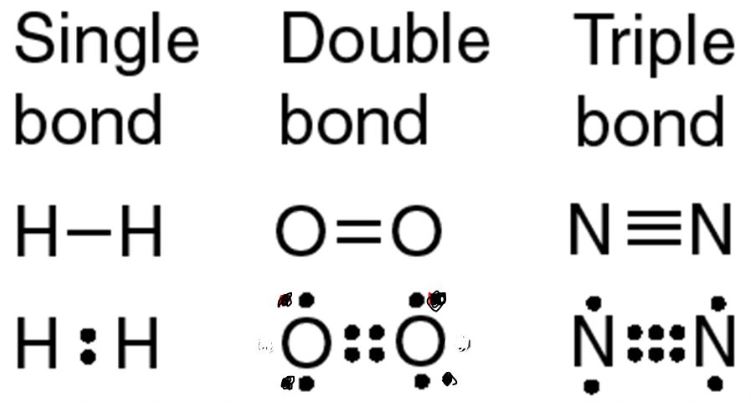 If one electron pair is shared among the two atoms, such bonds are termed single covalent bonds. It is drawn as a single dash (-).

This covalent bond possesses a lower density and is considered weaker compared to the double and triple bonds.

However, single covalent bonds are the most stable bond.

If two electron pairs are shared among the two atoms, such bonds are termed double covalent bonds. It is represented as using a double dash (=).

These double bonds are considered significantly stronger as compared to a single bond, although they are not much stable.

If three electron pairs are shared among the two atoms, such bonds are termed triple covalent bonds. They are drawn as three dashes (≡).

The stability of these triple bonds is very less compared to the single and double bonds.

The covalent bond properties are listed below:

2. No new electrons are formed during the formation of a covalent bond; instead, only pairing takes place.

4. Covalent bonding results in a powerful chemical bond among the atoms.

5. The average energy carried by a covalent bond is approx ~80 kcal/mol.

6. After the covalent bonds are formed, the bond-breaking rarely occurs instinctively.

8. Compounds developed via covalent bonding cannot conduct electricity due to the absence of free-flowing electrons.

9. Covalent compounds are insoluble in water.

Let us now move on to understand the ionic bond.

Ionic bonding takes place if the variation in electronegativity among two participating atoms is high.

These oppositely charged ions attract each other, and this electrostatic attraction thereby forms an ionic bond.

The ionic bond is formed by gaining or donating more than one electron. The charges on the anion and cation represent the number of electrons lost or gained.

Salt is one of the examples of an ionic compound.

You can also refer to the article I wrote on the ionic nature of NaCl.

Usually, in ionic bonds, the total charge needs to be zero.

Now we will understand more about the properties of ionic bonds.

Because of the active force of attraction which exist among the cations and anions in ionic molecules, the resulting features are noted:

1. Out of all the bonds in chemistry, the ionic bonds are the strongest.

2. Since the ionic bond separates the charges as cation and anion, it is considered highly reactive of all the bonds in the normal condition.

4. The molecules presenting ionic bonds in their aqueous solutions, or the melted form is considered good electrical conductors because of ions that serve to carry the charge.

Since we have covered the ionic and covalent bonds in detail, let’s understand the difference between the two bonds.

Difference Between Covalent and Ionic Bonds

The covalent bonds and ionic bonds are kinds of atomic bonds. These bonds differ in their characteristics and arrangement.

The covalent bonds involve electron pairs shared by two atoms joining them in a firm form. In contrast, a bond among two ions is termed an ionic bond.

The covalent bond formation takes place within two non-metallic atoms marked by the sharing of pair of electrons among the atoms and additional covalent bonds having electronegativity differences higher than 2.0.

In a covalent bond, polyatomic ions are formed.

In contrast, the ionic bond is constituted due to electrostatic attraction among the oppositely charged ions.

Why is CS2 Covalent?

From the discussion of covalent and ionic bonds, let us understand the covalent bonding phenomenon in CS2.

CS2 consists of one carbon and two sulfur atoms and electronegativity difference, which means the capacity to attract electrons towards itself among carbon and sulfur atoms is small.

These insignificantly polar bonds in opposing directions cut the polarity among each other and cancel the net polarity of the carbon disulfide.

Thus, the dipole moment of the carbon disulfide becomes zero, and it is not ionic due to its weak polarity.

Moreover, due to weak polarity, CS2 [S=C=S] is regarded as non-polar, having a linear geometry.

Read out the article written specifically on the polarity of CS2.

As there is a slight variation in the electronegativity values of carbon and sulfur, the shared electrons pair stays in the center equally drawn towards each element.

The covalent bond is formed by the sharing of electrons among the participating atoms.

What are the sources of Carbon Disulfide?

Small amounts of carbon disulfide are found in nature in gases and discharged to the surface of the earth, for instance, in volcanic eruptions.

The industrial carbon disulfide is manufactured at extremely high temperatures by mixing carbon and sulfur.

Let us look at a few of its applications.

Well, carbon Disulfide is known for its wide application

1. In the manufacturing of carbon tetrachloride and rayon, for producing petroleum catalysts.

3. Act as a solvent to iodine, phosphorous, in rubber production.

4. Utilized in camphor and used as pesticide component.

To summarize, the ionic or covalent nature of bonds can be examined by considering electronegativity, which means the capacity to attract electrons towards itself.

The carbon atom shares two electrons with each sulfur atom in carbon disulfide which makes CS2 bonding covalent with a linear geometry, where carbon and sulfur are positioned at 180o with each other.