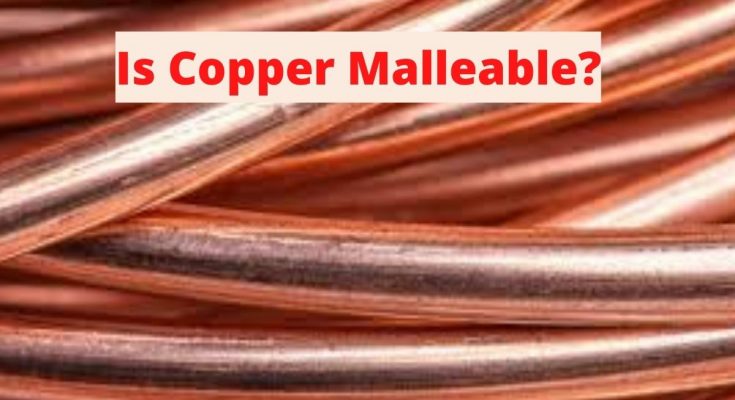 Copper has the atomic number 29 and belongs to group 11 of the periodic table. It is pinkish-orange in color and also occurs as a free metal in nature. Mostly, copper is found combined with other elements in different metals such as malachite, cuprite, bornite, azurite, etc.

It is also a good conductor of electricity and is used in the manufacturing of many electrical types of equipment. Also, its lustrous appearance makes it suitable for making jewelry, ornaments, and other items for decorative purposes.

Doesn’t it surprise you how do they draw copper into such different shapes without breaking it? Have you wondered what makes it possible for copper to attain different shapes and sizes so easily? Why is it the preferred metal for such works?

Don’t panic if you do not know the answers to the above questions because here we are to answer all your queries.

So, Is copper malleable? Yes, copper is malleable i.e. it can be molded into different shapes easily. Malleability is the property of metals which means that they can be beaten into thin sheets under the influence of external stress or force such as hammering. The malleability of copper is owing to its atomic structure in which the atoms are arranged in layers that can easily slide over one another when hit with an object.

Let’s get more information about how malleability works in copper.

Why is Copper Malleable?

The capability of a material to change its shape or increase its surface area under the influence of force is known as malleability.

Usually, it is the property of all the metals which means that the metals can be shaped into thin sheets typically when beaten with a hammer. It is a physical property that makes metals extremely useful in the automobile and electronics industry. 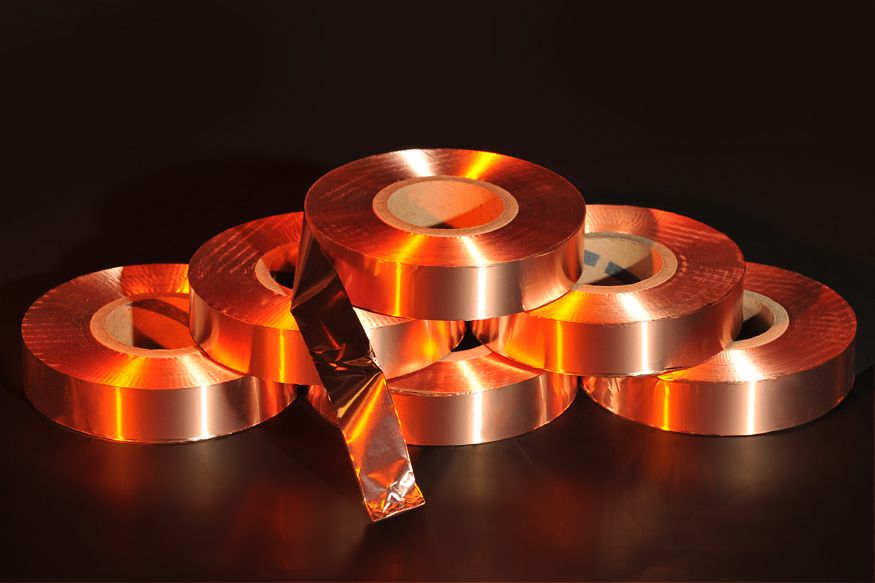 Copper is a metal and like other metals, it is also malleable. This is due to the crystal structure of copper. The atoms of copper are arranged in face-centered cubic lattice i.e. the copper atoms are located at each corner of a cube as well as at the center of the cube.

Hence, when a strong force is applied to a piece of copper, either through hammering or foraging, the layers of atoms slide over each other, and eventually, the small but thick piece gets beaten into long and thin sheets.

The malleability of copper makes it possible to form articles of different shapes and sizes without breaking them.

We discussed in the previous section how the layers of atoms in a metal element slip past one another to form thin sheets.

Similarly, if the metallic bonding is weak it will be easier to reshape the metal, which means the metal will be more malleable.

This can be seen in the diagram given below.

Initially, the atoms in copper or any other metal are arranged in the following manner with different layers arranged one over the other linked through metallic bonding. 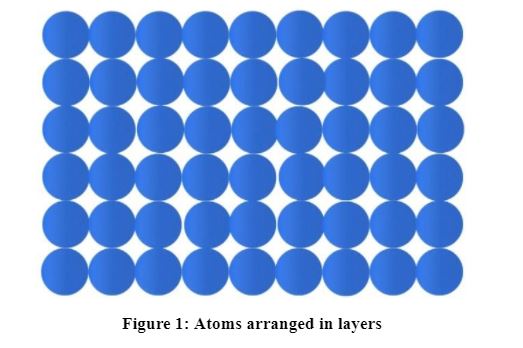 When an external force is applied, say hammering, the layers roll over each other as shown in the following diagram: 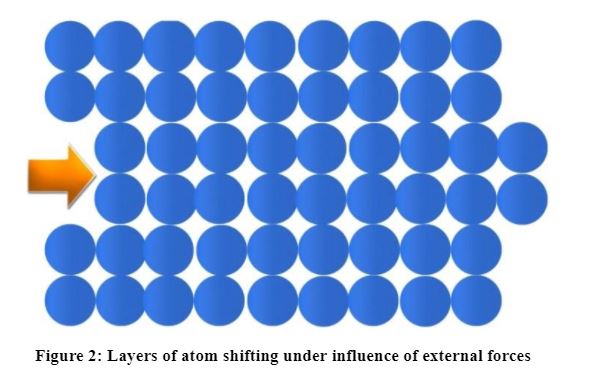 Now, imagine that these layers are linked through strong forces, what would happen?

Obviously, it would be difficult to move them. So, now you understand how metallic bonding affects the malleability of a substance.

Another factor that influences malleability is temperature.

The increase in temperature makes the metal more malleable and ductile as both these properties arise due to the availability of atomic layers to slide over each other.

For example, if you ever visit a blacksmith’s shop you would see that before reshaping any metal they heat it to high temperature after which it becomes easy to mold it into different shapes.

The opposite of the above is also true, meaning after the temperature drops below a certain value the metals become brittle.

Being brittle means that the metal would not shift shapes under the influence of force, and instead, it would break down into pieces.

The graph representing the change in malleability and ductility of a substance as an effect of temperature is given below: 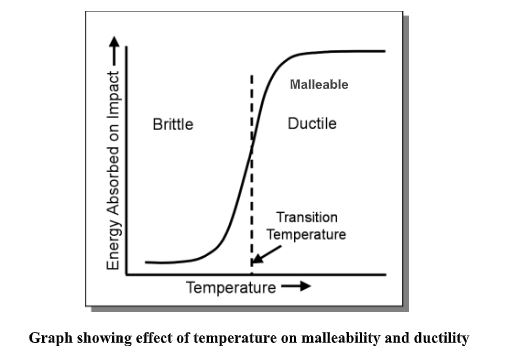 As per the above graph, for a certain range of temperature the malleability and ductility of a metal increases exponentially and thereafter, becomes constant.

Also below the transition temperature, the metals become brittle i.e. they would break under the influence of stress.

A crystal structure is constituted of two components viz. Bravais lattice i.e. the space, and the atoms.

The basis of any crystal structure is that atoms should be arranged in the Bravais lattice in a particular orientation and composition. This means that the angle, distance, and other parameters remain constant throughout the structure.

The structure of a face-centered cubic lattice is given below: 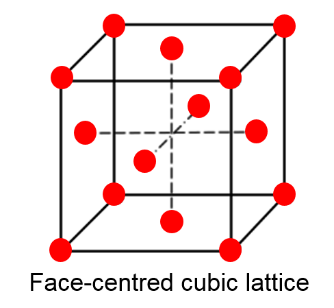 The red circles here symbolize copper atoms which are arranged at a definite distance and angle from each other in a fixed orientation and composition.

Related topic you must read

Is Copper a Pure Substance

As described in the previous sections the malleability of a metal depends upon its lattice structure as well as the extent of metallic bonding between its atoms.

If the structure does not contain evenly distributed atoms or if the metallic bonding is too strong, the malleability decreases considerably.

Malleability is the property of metals, amongst which gold is known to be the most malleable metal. The decreasing order of malleability for metals is given below: 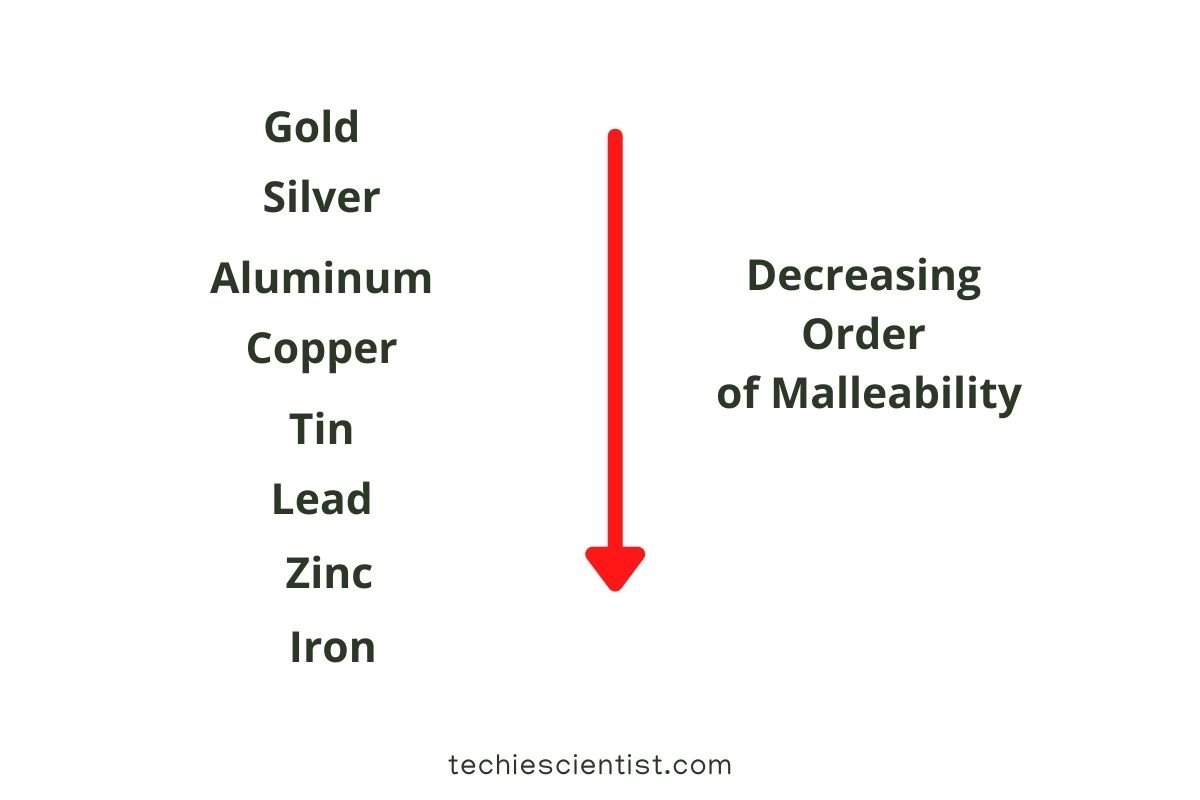 A few important properties of copper are listed below:

• Copper is a pinkish-orange color metal.

• It is a very good conductor of electricity due to which it is used in many electrical appliances.

• It is also a very good thermal conductor due to which many cooking utensils are coated with copper.

• It is highly malleable and ductile.

• It is biofouling resistant and has many antimicrobial properties due to which it is also used in the purification of water.

Copper is quite malleable which means that it can be easily be beaten into thin sheets or molded into different shapes with an easy application of force such as hammering.

The malleability of copper is due to its crystal structure in which the layers of atoms are arranged in such a manner that they roll past each other when an external force is applied.

Majorly two factors affect the malleability of any metal. They are metallic bonding and temperature.

The atoms of copper are arranged in a face-centered cubic lattice structure in which one atom is present at each lattice point and one at the center of each face.