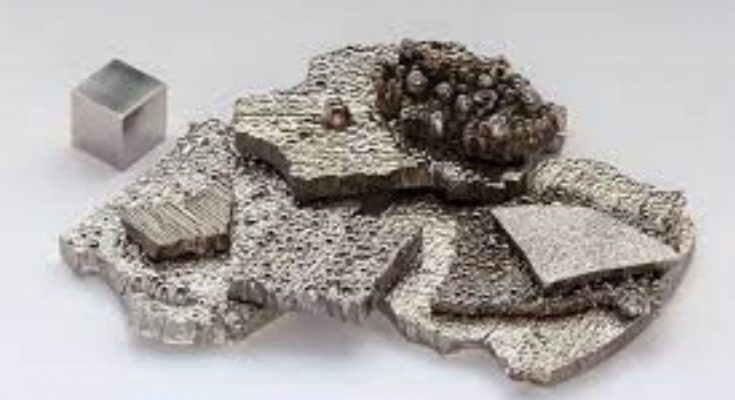 All around us, there are questions hidden, from tiny stones to big rocks, waiting to be answered.

In the world of science, there are a million explanations as to why an object reacts the way it does. One such puzzling occurrence is magnetism.

Is cobalt magnetic? Technically, yes, it is. Cobalt is a ferromagnetic metal, which attracts other magnets to itself. Since Cobalt has unpaired electrons in its valence orbital and their electronic spin aligns in the same direction forming a magnetic domain making cobalt magnetic in nature. The spinning of electrons creates a magnetic dipole and if these dipoles are aligned parallel, a strong magnetic field is produced.

This metal is also widely used in the production of both soft and hard magnets. Cobalt is used in hard disks, actuators, sensors, motors, wind turbines, and MRI machines with its alloys.

In this article, we will talk about the magnetic properties of cobalt, its uses, and much more.

Stay with us till the end of this article, and we will tell you everything there is to know about cobalt’s unique magnetism.

Cobalt is a ferromagnetic metal, bluish-gray in color, with a hard and lustrous texture. It is a rare metal found in the earth’s crust only in a chemically combined form, save for small traces found in alloys of natural meteoric iron.

Ferromagnetism is a rare physical property found only in a handful of metals. Due to ferromagnetism, certain materials (such as iron or cobalt) can form permanent magnets or are attracted to magnets.

Only five types of magnetism have been discovered as of yet. They are:

Ferromagnetism (along with ferrimagnetism, since they are of similar effect) is the strongest type used in most of the magnets we encounter in our daily lives.

An example of a ferromagnetic object we see very often is refrigerator magnets used to hold notes to the refrigerator doors.

The most common examples of ferromagnetic materials are Iron, Cobalt, Nickel.

Reasons behind the ferromagnetism in Cobalt

Now, you may be wondering why only the above three metals are mainly ferromagnetic in nature. Well, we have an answer to that too.

These three metals fulfill the ferromagnetism criteria, which is what we will talk about in this section.

Firstly, these elements have unpaired electrons in the valence orbital, which act like magnetic dipoles. Such elements are called paramagnetic metals.

However, this is not enough to make them ferromagnetic, due to thermal vibrations and dipole-dipole interactions.

Dipoles do not align themselves to form magnetic domains in normal paramagnetic elements such as oxygen.

But, in ferromagnetic elements, the exchange of energy overcomes the dipole-dipole interactions and thermal fluctuations to make the dipoles align to form magnetic domains.

Thus, whenever these elements are placed near magnets, the dipoles inside them align and the magnetic force is observed. 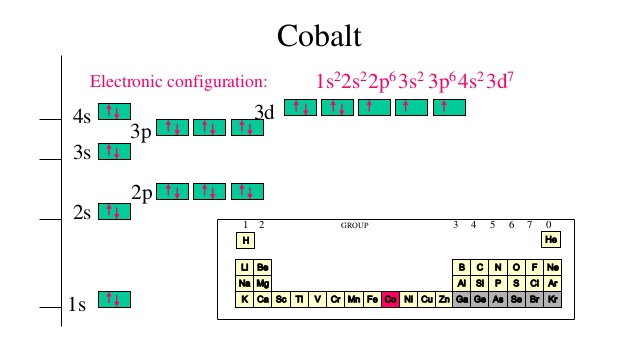 The magnetic moment of cobalt is 2.49 μB.

The magnetic moment is the vector quantity that measures the amount of magnetism carried by the material. It is directly proportional to its magnetic field.

It is a directional value and is measured by the below formulae.

Although we know that cobalt is ferromagnetic and can be used to produce magnets, at least one other metal is also used as an alloy in the production process.

In this section, we will be talking about the properties of the soft and hard magnets produced using cobalt. We will also go through the types of hard magnets created with cobalt alloy and their origin.

Cobalt is mostly used in hard magnets, except for a few soft magnets. The alloys used in those magnets consist of cobalt and iron, adding vanadium to improve ductility.

The soft magnets that are produced with the use of cobalt alloys have some advantages over other soft magnets.

These have a high saturation point, good permeability in magnetic fields, and a high Curie point of 950-990 degrees Celsius. It results in their magnetic properties remaining unaltered under temperatures of 500 degrees Celsius.

Many different types of cobalt alloys are used in the production of hard magnets. They are: 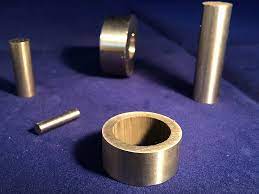 The very first modern permanent magnets were the aluminum-nickel-iron magnets, which were produced in Tokyo, 1932.

After twenty years of research and development, it was found that replacing the iron in the equation with cobalt considerably enhanced the properties of the magnets. Hence, the aluminum-nickel-cobalt magnets came into production.

Although there are several stronger magnets in the rare-earth classes, the Alnico magnets are still used in bulk. 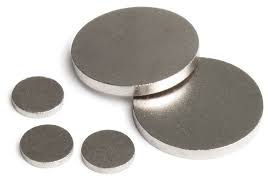 During the 1960s, cobalt- rare-earth compounds were theorized as promising hard magnet materials.

A decade later, in the 1970s, the production of Samarium Cobalt (SmCo) magnets through the process of sintering was started and soon gained prominence in the markets.

The development was similar to that seen from the leap between steel magnets and Alnico.

Although these magnets are still widely in use, they were overtaken by the neodymium-iron-boron magnets, which are more powerful, versatile, and cost-effective. 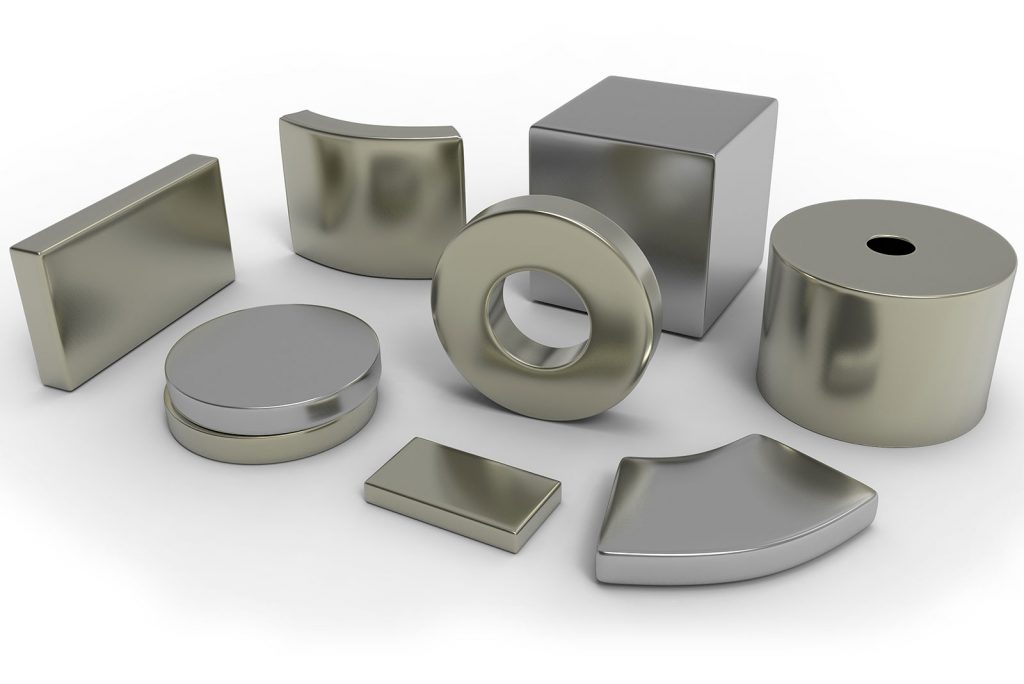 In 1983, the Ne-Fe-B hard magnets were developed and, as expected, showed a tenfold increase in the magnetic energy in comparison to the SmCo magnets.

Again, the improved properties of the magnetic material resulted in large technological advances in other sectors such as motors, disk drive, magnetic resonance imaging, and high-efficiency motors.

However, despite the improved properties, there were problems in the form of thermal instability and poor corrosion resistance.

To overcome these challenges, coating techniques were applied and have been largely achieved with the addition of cobalt.

Compared to Alnico, the neodymium-iron-boron hard magnets contain a lesser amount of cobalt, around 1.5%.

How are Samarium Cobalt magnets made?

We have already discussed that cobalt can be used to produce hard and soft magnets. In this section, we will talk about the process through which the cobalt is manufactured.

Samarium Cobalt (SmCo) magnets are the most widely used magnets in the last 40 years. You can use two processes to produce these magnets: bonding and sintering.

In this article, we will be discussing the bonding process.

Step 1: All the raw materials used in manufacturing the magnets are heated up in an induction furnace filled up with argon gas. Then, they are melted to form the alloy material.

Step 2: The melted liquid alloy is poured into molds and then cooled with water to form ingots.

After the cooling, the ingots are broken down, grounded, and milled to form a fine powder.

Step 3: In place of sintering, the powder is mixed with a binding chemical, such as an epoxy resin.

Next, it is die-pressed and heated in the presence of an externally applied magnetic field to orientate the powdered particles. This is the reason why most bonded Samarium

Step 4: After the bonding, these magnets do not require extra machining as they are pressed into the desired shape and size.

After the coating process (assuming that the product is required to be coated; this is not a necessary step), the last and final step in the production process is the magnetization of the magnets using an externally applied magnetic field.

Now that we have talked about their production process, you must be wondering, where are these magnets used?

Well, you would be surprised to know how many of them you see on an almost daily basis.

Doorbells: It may be surprising, but yes. Doorbells have several magnets, and you can tell by the amount by tones it produces.

Refrigerator: All refrigerators have a magnetic open/close mechanism so that they are easy to open from the inside in case of any emergency.

Computers: Computers use magnets too! The hard drive’s disk is covered in small magnets to let the computer use the data.

The CRT computer screens are produced as television screens and use electromagnets.

Office supplies: Neodymium is also used in the organization of office supplies. Metals supplies like clips and thumbtacks stick to the magnets, therefore preventing spilling and disorganization.

In this article, we talked about the magnetic properties of cobalt. Cobalt is a bluish-gray, ferromagnetic metal, meaning that it can attract other metals to itself and can be used to produce soft and hard magnets.

Over the years, the alloys used to produce magnets have been developed and improved with the addition of cobalt. Although the neodymium-iron-boron alloy is the latest breakthrough in the magnet production industry, they still have a few technicalities.

We also talked you through the production process of Samarium Cobalt (SmCo) magnets.

Lastly, we observed some of the most commonplace uses of magnets in our daily lives.