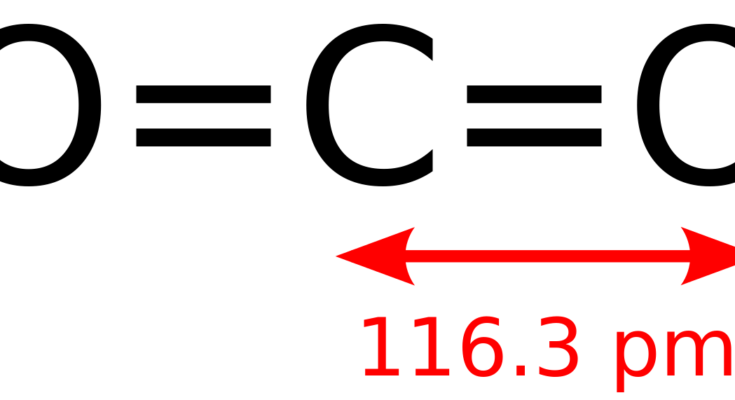 Carbon dioxide is a colorless gas with chemical formula CO2 present in our environment with no odor at low concentration. We, humans, are also the source of this gas as we release carbon dioxide through our body in different forms. Many of you may have doubts regarding whether the CO2 gas molecule is polar or not. We will discuss this and will cover its properties and uses.

So, Is CO2 polar or nonpolar? CO2 (carbon dioxide) is a nonpolar molecule because of its linear symmetric shape. Although the carbon and oxygen differ in their electronegativity due to which C=O bond is polar, the polarity of both opposite C=O bonds get canceled by each other due to symmetrical shape and result in a nonpolar molecule with zero dipole moment.

Carbon dioxide gas is colorless and odorless in nature and its density is 60% higher than that of dry air around us. It is a naturally occurring gas in the earth’s atmosphere.

Its naturally occurring sources are like humans, geysers, volcanoes, and many chemical reactions including the dissolution of carbonate in water and acid.

Apart from humans, it is released by various aerobic organisms on earth were they metabolize the carbohydrates to release carbon dioxide gas.

If we talk about the chemical composition of the CO2 molecule, it consists of one carbo atoms and two oxygen atoms.

Carbon is the central atom surrounded by the two oxygen atoms on both sides. The shape of the molecule is linear as both oxygen atoms are opposite to each other.

But due to the symmetry of the molecule ie; linear structure, both C=O bonds lie opposite to each other, and polarity of both gets canceled by each other.

The CO2 molecule is nonpolar and its dipole also turns out to be 0 D.

Why is CO2 a Nonpolar Molecule?

The molecule of CO2 is polar because of the following reason.

The symmetrical geometry (linear) of the CO2 molecule cancels out the polarity of the C=O polar bonds due to which net dipole of the molecule becomes zero.

The valence electrons of oxygen are 6 and that of carbon is 4. Oxygen needs 2 electrons to complete its octet and carbon needs 4 for the same.

The oxygen atoms lie at both sides of the carbon atom. And oxygen being more electronegative pulls the bonded electron pair slightly more towards its side and gains partial negative charge and carbon gains partial positive charge.

The dipole across the C=O bonds is non zero and originates towards oxygen, but the equal and opposite dipoles cancel out each other resulting in a nonpolar molecule.

The polarity of a molecule is decided by the type of bonding it involves across its atoms. The covalent bonds can be polar or nonpolar depending upon the various factors.

Non-Polar Molecules: These molecules are electrically neutral and in these molecules, bonded shared electrons are at equal distance from both atoms forming a covalent bond.

The dipole moment of these molecules is always zero.

There is no electronegativity difference between the atoms across these molecules. It means bonded electrons are equally shared by the atoms.

Some of the examples of these molecules are Hexane, CCl4. You can check out the reason for the non-polarity of CCl4.

Polar Molecules: These molecules have unequal charge distribution across its atoms. There exists a difference between the electronegativity of the atoms.

Electronegativity: If there is a difference between the electronegativity of atoms forming a covalent bond, it ensures the polarity of the bond formed.

Higher electronegative atom pulls the bonded electron towards its side with greater influence and gains partial negative charge and becomes a negative pole of molecule whereas another atom becomes a positive pole.

Dipole Moment: The dipole of the polar molecules is always non zero. It is the measure of the polaroid of a molecule.

It is also defined as the product of the charge on atoms and the distance between the centers of positive and negative charge.

Its Si unit is Debye and is denoted by D.

Due to the symmetric shape of nonpolar molecules, the charge distribution remains uniform on its atoms.

Below is the image of the shape of the molecule of CO2.

Oxygen is more electronegative than carbon resulting in the C=O bond to be polar and results in non zero dipole moment.

For more information regarding the geometry and lewis structure of CO2 molecule, You must also read out the article written on CO2 Lewis structure, Molecular geometry, and Hybridization.

But the dipole of both opposite C=O bonds gets canceled with each other due to the symmetrical molecular structure of CO2 making it a nonpolar molecule.

So guys, if there is anything you have doubt, let us know using the comment section below. We will reach out to you as soon as possible.