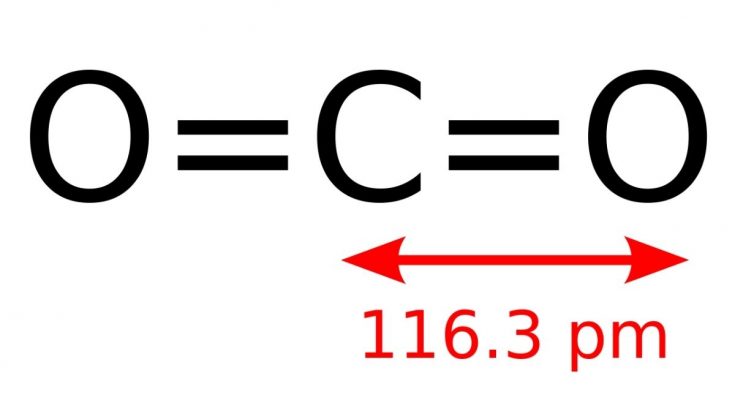 CO2 is the chemical formula of the molecular compound of Carbon Dioxide. It is one of the most important compounds and we are familiar with CO2 since childhood.

We already know the role of CO2 in respiration. Other than that, we also identify its role in climate change since it is a greenhouse gas. Not only this, we learn about carbon dioxide when we study the carbon cycle and the photosynthesis of plants.

Adding to this, who hasn’t heard of dry ice? The solid form of CO2 that we use as a refrigerant.

Now, you might be wondering about the nature of bonding in CO2 – whether it is an ionic or covalent compound.

So, today, in this article, we will discuss Carbon Dioxide – whether it is ionic or covalent in nature.

A compound is said to be covalent when it has an electronegativity difference between its bonded atoms to be less than 1.8-2. In a CO2 molecule, between C and O, the difference is around 0.89, so we can call this a covalently bonded molecule.

Other than this, here in each bond of C and O, the atom of carbon shares four electron pairs with oxygen forming a double bond. Doing so, both C and O attain octet fulfillment. Oxygen and Carbon both are present in the second period and therefore achieve the outermost shell configuration of the noble gas Neon.

The above explanation is just a gist of the topic we have dealt with. Let us now understand it in detail:

Before that, let us look at some of the tidbits about the famous molecular composition.

CO2 has a molecular weight of about 44.009 g/mol. It is acidic but fairly non-toxic. It bears a colorless and odorless gaseous appearance which is capable of dissolving in water to form carbonic acid H2CO3.

We can produce and manufacture this compound via several means. Here, we can see a number of chemical reactions that lead to the formation of this product:

Before we can discuss whether CO2 is ionic or covalent, we have to first understand the nature of chemical bonding inside the molecule. To do so, we have to study chemical bonds and their types and how they are formed in order to have a crystal clear idea.

Chemical bonding is one of the most significant aspects of chemistry. It deals with the attractive nature of atoms to combine with one another and form different types of molecular compositions.

Atoms have negatively charged subatomic particles called electrons around the nucleus. The electrons present in the outermost shell, also known as valence electrons, have a tendency to take part in the bond formation as a result of which we get several products.

This chapter deals with various types of chemical bonds. However, in this article, we will restrict our discussion to two major types: Ionic and Covalent.

We usually witness this sort of bond formation in a molecule formed by a metal and a non-metallic element.

Note: Usually the elements obtain their octet configuration due to the chemical bond formation.

Covalent bonds are formed via the electron sharing process where atoms of the same or different elements come together to share electron pairs among themselves.

Sharing of one valence electron pair results in a single bond between two constituent atoms inside a molecule, sharing of two pairs ends up in a double bond and that of three pairs forms a triple bond.

Here, also the participating atoms attain octet configuration although there are certain exceptions.

Below is the image of the atoms sharing electrons and forming a covalent bond. 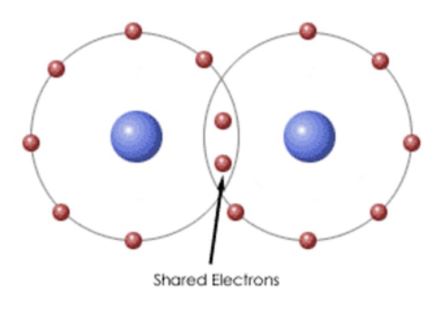 In covalent bonds, we have the concept of polarity.

While ionic bonds already have atoms bearing charges, covalent bonds are said to be polar or nonpolar based on electronegativity differences.

So, the main factor determining the nature of covalent bonds is electronegativity.

Electronegativity is one of the chemical properties exhibited by an element. It is denoted by the symbol χ and is defined to express the tendency of an atom to attract negatively charged electrons towards itself.

We have the Pauling Electronegativity chart from where we can easily find out the values for each element in the periodic table.

We need this chart when we are trying to decipher whether a molecule is polar or nonpolar in nature.

According to the generalized notion, when the electronegativity difference between two atoms in a bond is less than 0.4-0.5, it is said to be a nonpolar covalent bond.

When the electronegativity difference is 0.5 – 1.8 (usually from 0.4 to around 2), then we call the bond to be polar covalent.

Anything beyond that is said to be ionic.

Other factors that also have a role to play in influencing the covalent nature of bond formation are as below:

While electronegativity measures the degree to which electrons can be gained by an atom, ionization energy determines the energy needed so that an electron can be removed from any isolated (usually gaseous) atom or ion.

The ascending or descending order of ionization energy can be deduced from the periodic table as per the trends followed by the atoms.

High ionization energy indicates that more energy is needed or difficulty is there to remove an electron.

Hence, atoms of such elements cannot easily lose electrons to give rise to positively charged ions needed for the formation of an ionic bond inside a molecule.

We will therefore have covalent bonds in those certain cases.

Electron affinity is yet another property of an atom which deals with its ability to accept negatively charged electrons.

It is the measurement of potential energy change that occurs when the atom turns an anion (negatively charged ion) from a neutral form.

Usually when the atoms tend to have almost similar affinities for electron attraction, then we see the covalent bond formation.

This sort of bond is formed mainly between non-metals.

Ionic bonds occur when one is a metal and the other a non-metal (electron affinities are different in those cases).

The electronic configuration of an O atom is 1s2 2s2 2p4.

Now, carbon has four electrons i.e half octet in its outermost or valence shell. To achieve octet configuration, it has to either gain or lose four electrons.

This is not scientifically supported because it will result in the instability of the ion formed. So, the Carbon atom cannot form an ionic bond and hence in this molecule, C has to share electrons with the two atoms of oxygen for octet fulfillment.

Also, oxygen belongs to group 16 or the chalcogen family. Elements present in the later groups (15,16,17) are generally related to covalent bond formation.

(remember: 1st molar ionization energies are mentioned here since we are talking about neutral atomic species). Both the values are high.

Let us look at the Lewis Structure of CO2: 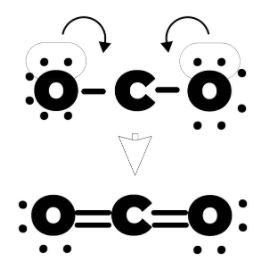 In (I), the octet fulfillment of C has not occurred, and also after measuring formal charge values, we can come down to the conclusion that (II) is the correct Lewis Structure configuration for CO2.

So, in a molecule of carbon dioxide, the C atom forms two double covalent bonds, one with each O atom.

Now, let us find out the polar nature of the bond formation:

According to the table given above, each bond of carbon and oxygen is polar covalent in nature (C=O).

But, CO2 is linear and the electric dipoles cancel out to give us a net dipole of zero. Hence, it is a nonpolar molecule.

CO2 or carbon dioxide is one of the most significant gaseous substances that has a wide range of applications across several industries.

It is a covalent compound having two double covalent polar bonds, although it itself is a nonpolar molecule.
CO2 is linear in shape and an important molecule to be studied in chemistry for its varied role and influence in day-to-day lives.