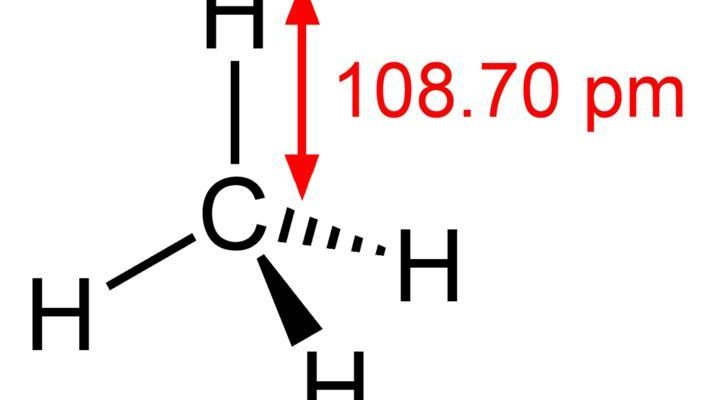 Methane is a colorless and odorless gas with the chemical formula CH4 i.e. one atom of carbon is bonded to four other atoms of hydrogen. It belongs to group-14 hydride (chemical compounds consisting of hydrogen atoms and group 14 atoms).

Methane is the most basic alkane and the primary component of natural gas. It is produced by anaerobic bacteria which are found in landfills and the gut of ruminants.

It is one of the most significant greenhouse gases, with human activities accounting for about 70% of methane emissions. Pure methane is a high-energy feedstock with a 55.7 MJ/kg energy density that is used to produce electricity, heat homes, and for cooking.

In the year 1776, Alessandro Volta, an Italian physicist, was the first to scientifically recognize methane.

Most of the students wonder if methane is ionic or covalent. The presence of four hydrogen atoms makes it further confusing. In this blog, I will provide you clear answers to this question and discuss the concepts of bonding in detail.

So, is Methane (CH4) a covalent compound? Let’s find out in the next section.

Well, that was a crisp answer. Now let me discuss the covalent nature of methane in detail.

Before we dig into the details of covalent bonds in methane, let’s start from the basics. First, I will explain the concept of bonding and its types.

What is Chemical Bonding?

Ever thought about the reason why all atoms participate in chemical bonding? I have the answer for you. Read on…

All the atoms prefer to stay in the ground state. This is the state with the least energy and highest stability. An atom is most stable when it attains octet configuration i.e. when its valence or outermost shell is completely filled with 8 electrons. All the atoms try to achieve the ground state by completing the octet.

To fill the outermost shell with eight electrons, atoms participate in chemical reactions. They try to attain this stable configuration by losing, gaining, or sharing electrons from one atom to another. Two atoms can combine to form either a molecule or a compound.

Now, let’s look into the types of chemical bonds.

Based on whether the atoms are transferred completely or shared the chemical bonds can be classified into the following:

When the valence (outermost) electrons of one atom are permanently transferred to another atom, an ionic bond is formed. These bonds are formed due to the electrostatic attraction between oppositely charged ions.

Such elements’ atoms appear to share electrons with atoms of other elements or with atoms of the same element in such a way that both atoms achieve an octet arrangement in their respective valence shells.

Thus they achieve stability. In short, a covalent bond refers to an association formed by the sharing of electron pairs among different or similar kinds of molecules.

To become stable, Carbon’s electronic configuration needs it to gain or lose four electrons, which seems unlikely because:

Since carbon cannot accept or donate electrons, the only option left is sharing electrons to complete its nearest noble gas configuration and thereby form a covalent bond. 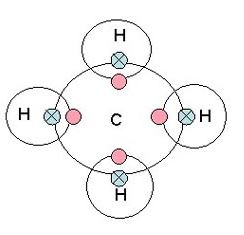 If sharing a single electron pair between atoms does not satisfy octet configuration, the atoms can share more than one electron pair. Let’s see some properties of covalent bonds:

It is an atom’s property that causes it to draw the mutual electron pair towards it. The Pauling scale is used to calculate the electronegativity of the atoms.

Ionic bonds are described as chemical bonds in which the electronegativity difference between two atoms in a chemical bond is greater than 2.0. If the difference is less than 2.0 on the Pauling scale, a covalent bond is present.

Why is CH4 a Covalent Compound?

The electronegativity value of the hydrogen atom = 2.20

The electronegativity value of the carbon atom = 2.55

Since the electronegativity difference is only 0.35 on Pauling Scale, all the C and H atoms in methane are covalently bonded making it a covalent compound.

For detailed information about what type of bonding Methane (CH4) molecule exhibits, you must also read out article on CH4 Intermolecular Forces.

All the above-mentioned properties are similar to those of a covalent compound such as low melting and boiling point, low enthalpy of fusion, and low solubility and thermal conductivity. This further strengthens the fact that methane is a covalent compound.

The CH4 is tetrahedral in shape, and as a result of this arrangement, each bond pair is at an equal distance from one another, i.e. they are symmetrically arranged. As a result, each bond dipole moment balances the other.

Thus the net dipole moment of methane turns out to be zero. Since the dipole moment is zero methane is a nonpolar covalent compound.

Also, check out the article on the Is CH4 Polar or Nonpolar.

In this article, I have discussed the basic concepts of chemical bonding and the nature of bonds in methane. Please feel free to ask any questions you may have in the comments section. We will respond as soon as possible.