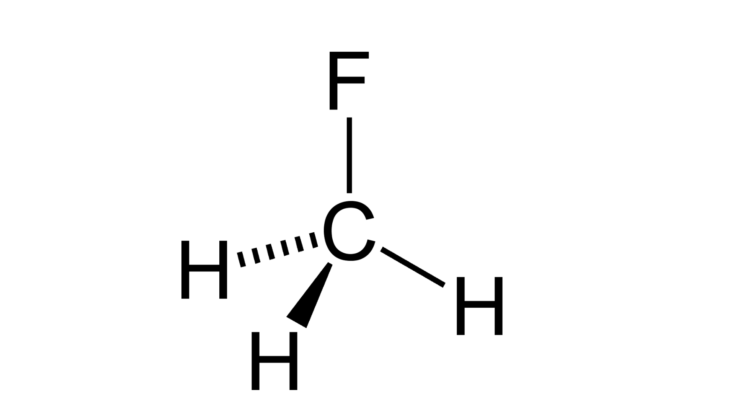 Fluorommethane is an organic compound having chemical formula CH3F. It is non-toxic and liquefiable gas. It is flammable in nature. Many of you may have doubts about whether CH3F is polar or not. In this article, I will answer this and will cover the properties and its application.

So, Is CH3F Polar or Nonpolar? CH3F is a polar molecule due to the presence of higher electronegative Fluorine atom and gains a partial negative charge and other atoms gain partial positive charge and make the molecule polar. The dipole of the CH3F molecule is also non zero.

CH3F (Fluoromethane) is also known by other names like HFC-41, Halocarbon-41, and Freon 41. It exists in the gaseous state at room temperature and can bee converted into the liquid state on higher pressure.

It is a non-toxic gas and colorless gas with a pleasant smell like ether. It is produced by methane gas. The hydrogen atom of the methane molecule is substituted with a fluorine atom.

However, this gas is not declared toxic to human health.

The molecular mass of fluoromethane is 34.03 g/mol. It is calculated as below

If we talk about the chemical composition of CH3F, there exists 1 atom of fluorine, 1 atom of carbon, and 3 atoms of hydrogen.

Carbon is the central atom of the molecule covalently bonded wit 3 hydrogen and 1 fluorine atom. The electronegativity of carbon is 2.55 and hydrogen is 2.22 and that of fluorine is 3.98.

Being higher electronegative, fluorine atom attracts the bonded electron pair slightly more towards it and gains a partial negative charge.

On the other side, carbon and hydrogen gain a partial positive charge. As a result, the two poles are generated within the CH3F molecule making it a polar molecule.

Contents show
Why is CH3F Polar?
Polar Versus Nonpolar Molecules
Points to check whether a molecule is polar or not
Properties of CH3F
Uses of CH3F
Conclusion

As we discussed, the molecule consists of 3 hydrogen atoms and 1 fluorine atom covalently bonded with the Carbon atom.

Carbon is the central atom and the CH3F molecule forms the tetrahedral geometrical shape.

The electronegativity of fluorine (3.98) is pretty greater than that of hydrogen and carbon atom due to which the fluorine atom attracts the bonded electron pair slightly towards its side.

The fluorine atom gets partial negative charge on it and it becomes the negative pole of molecule whereas the hydrogen and carbon gain partial positive charge and become a positive pole of the molecule.

Due to the appreciable differences between the molecules of the CH3F molecule, it becomes polar in nature.

The polar molecules are covalently bonded with each other. Although there are many other bonded forces like an ionic bond, hydrogen bonding, metallic bonding, etc.

The covalent bond can be polar depending on various factors that are discussed below.

These molecules generate positive and negative poles within them.

Two atoms differing in their electronegativity and covalently bonded with each other tends to form a polar bond.

Few examples of polar molecules are HCl, OF2, H2O. You can check out the reason for the polarity of HCl.

Nonpolar Molecules: These molecules always have zero dipole moment. The atoms across these molecules share an unequal proportion of charge.

The bond formed by two atoms having equal electronegativity is always nonpolar.

Few examples of such molecules are CO2, Hexane, SO3. you can check out the reason for the non-polarity of SO3.

Points to check whether a molecule is polar or not

The polarity of a molecule is directly proportional to the difference between the electronegativity of atoms forming it.

Similarly, in the case of CH3F, fluorine is higher electronegative than carbon and hydrogen due to which the fluorine gains partial negative charge and other atoms get partial positive charge.

The term polarity depicts the poles generates across the molecule.

Dipole Moment: the dipole moment of a molecule is the product of charge on atoms and the distance between the centers of a negative and positive charge.

The dipole of a molecule is also directly proportional to its polarity.

Below is the image of the geometrical structure of the fluoromethane molecule.

Note: it is also important to understand that a nonpolar molecule can have polar bonds within them, but their polarity gets canceled with each other due to its symmetrical shape and resulting in an overall nonpolar molecule.

Fluoromethane (CH3F) is a gas that consists of 1 C, 3 H, and 1 F atoms. Fluorine is more electronegative than carbon and hydrogen due to which it pulls the electron towards it and gains a partial negative charge and other atoms gain partial positive charge.

Due to the difference between the electronegativity of the atoms, CH3F molecule is polar

Guys, if you have any questions regarding the same, you can ask them in the comment section. We will reach out to you as soon as possible.