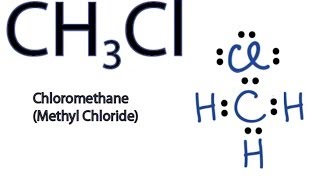 Polarity, as seen in compounds, is a condition where separation in electric charge results in the positive and negative pole of a compound.

This is produced due to the difference in the electronegativity (the ability of an atom in a chemical bond to pull electrons towards itself) of two or more atoms in a molecule or in other words, the unequal sharing of their valence electrons.

It involves the physical properties of the compounds such as boiling and melting points, solubility, surface tension and the interaction between the molecules.

So, Is CH3Cl polar or non-polar? Yes, Methyl chloride (CH3Cl) or Chloromethane is a polar molecule. The C-Cl covalent bond shows unequal electronegativity because Cl is more electronegative than carbon causing a separation in charges that results in a net dipole.

Polar molecules are those molecules that possess two ends, like two poles of a magnet, which vary completely in the nature of charge they carry.

For instance, in HCl ( Hydrogen Chloride) the chlorine exhibits higher electronegativity than hydrogen thereby strongly attracting electrons yielding a partial negative charge on itself and a partial positive charge on the other end, that is, on hydrogen.

The electronegativity of atoms sharing covalent bonds can be best understood by the Lewis structure and Valence Bond Theory. 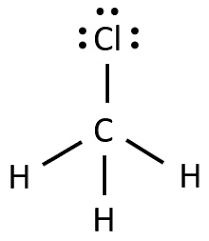 Determining the arrangement of atoms and the distribution of electrons around it is important to predict the molecule’s shape and explain its characteristics.

If you consider Lewis structure for CH3Cl, you will find that it is an asymmetrical molecule. The absence of symmetry is due to the unequal sharing of valence electrons.

When the structure is drawn, carbon is positioned at the center as the central atom with chlorine on one side and the hydrogen atoms on the other side.

If we look at the molecular geometry of the molecule, we can determine the polarity by drawing arrows of net dipole. Let’s learn the Lewis dot structure for CH3Cl.

Carbon being the central atom remains at the center. The hydrogen atoms are always positioned at the outside and chlorine which is highly electronegative will go on the outside as well.

Further, we need to distribute these electrons in the structure.

As we know, chlorine is more electronegative than carbon since it lies closer to fluorine on the periodic table, a dipole arrow can be drawn from Carbon to Chlorine [ C-Cl ] with the cross at one end.

The difference between electronegativity values of hydrogen and carbon is small and thus C-H bond is non-polar. Therefore, we do not draw any dipole arrow for C-H bonds.

The Lewis electron dot structure reveals the arrangement of electrons in a molecule in a two-dimensional representation.

Whereas the Valence Bond Theory reflects on the different shapes of a molecule and the molecule model that result from the overlapping of atomic orbitals holding bonding and non-bonding electrons.

Now, there is no lone pair of the electrons left since carbon has 4 valence electrons and all the 4 have formed bonds with 3 hydrogens and 1 chlorine atom. 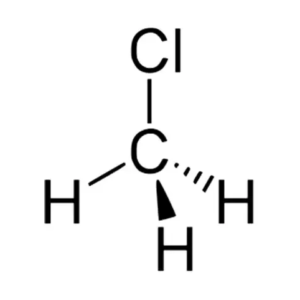 Let us have a closer look at the tetrahedral bonding. Here, we need to understand how carbon forms four bonds when it has only two half-filled p- orbitals available for bonding.

In order to explain this, we have to consider the orbital hybridization concept. This concept refers to the combination of atomic orbitals on a single atom that forms new hybrid orbitals with geometry appropriate for the pairing of electrons so as to form chemical bonds.

In the picture below, there are four valence orbitals of carbon i.e., one 2s and three 2p orbitals. These combine forming four equivalent hybrid orbitals.

Structure and properties of Chloromethane

Chloromethane belongs to the group of organic compounds called haloalkanes or methyl halides and has a tetrahedral structure with a bond angle of 109.5°.

The tetrahedral structure of chloromethane is a result of repulsion between the electron clouds on atoms around the central carbon atom. It has an asymmetrical geometry to avoid the canceling of dipoles which arise due to the opposing charges.

This molecule has a boiling point of -24°C (-11.2°F) and turns into liquid under its own pressure. It freezes at -97.6°C and is industrially used as a refrigerant.

In nature, methyl chloride is formed in oceans by marine phytoplankton. They are also formed from natural processes like the burning of biomass in grasslands and forests.

A mixture of chlorine and methane when subjected to ultraviolet light undergo a substitution reaction forming chloromethane.

In methyl chloride, one hydrogen is replaced by a chloro-group and it gives a mild sweet smell only when present in high concentration in the air or otherwise is difficult to detect.

Methyl chloride is a colorless, odorless (in low concentration), toxic and flammable gas. It is a weak electrolyte because of the polar covalent bond that allows the molecule to acts as a good conductor.

Polar molecules like CH3Cl tend to associate more due to the attraction between the positive and negative ends of the molecule.

This association leads to a decrease in the vapor pressure and an increase in the boiling point as more energy is required to vaporize the molecule. Chloromethane, like other polar molecules, interacts through dipole-dipole forces.

Hazards of exposure to methyl chloride

Methyl chloride is a highly flammable and also a hazardous chemical. Sources of exposure to methyl chloride include burning of wood, coal and some plastics, cigarette smoke, aerosol propellants.

Low concentration of this chemical is also present in lakes, streams and in drinking water.

In humans, a brief exposure to toxic levels of methyl chloride can have a serious impact on the nervous system and can cause coma, paralysis, convulsions, seizures and possibly death.

It has been reported that it can cause frostbite and neurotoxicity depending on the route and concentration of exposure.