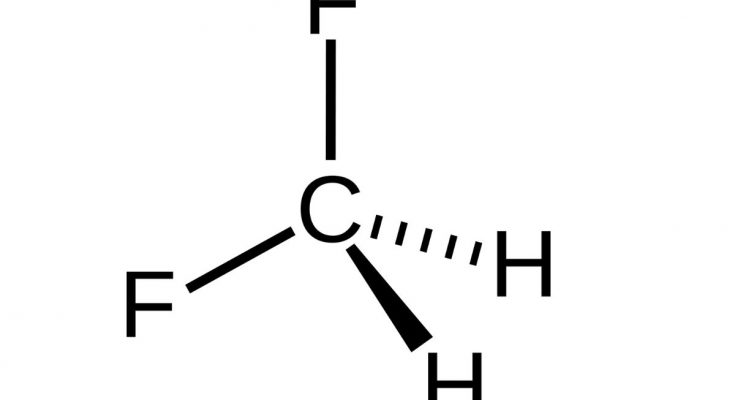 Difluoromethane (CH2F2) is a colorless gas at room temperature and atmospheric pressure. It is thermally stable and it has application in endothermic processes such as air conditioners, refrigerators, and fire extinguishers. However, difluoromethane can cause injury to the skin on contact (Frostbite) owing to its low boiling point (-52 °C) and melting point (-136 °C).

So, is CH2F2 polar or nonpolar? Yes, difluoromethane (CH2F2) is polar despite its symmetrical shape i.e., tetrahedral geometry. The polarity arises owing to the large difference in electronegativity of the C-F bond. The C-F bond is polar in nature and hence, results in the formation of the strong dipole. Therefore, the molecule will have a net dipole moment with a negative pole on the fluorine atom. It leads to the polar nature of the CH2F2 molecule.

Let us discuss the polar nature of the CH2F2 molecule in detail.

First of all, we need to understand the meaning of polar and nonpolar molecules. Then, we will move towards factors on which the polarity of the molecule depends. Afterward, we will study that how CH2F2 is a polar molecule.

Let us start with the basics of chemical bonding i.e., Ionic and Covalent.

Generally, elements do not exist in their atomic form except noble gases. Hence, the attraction between two similar or different atoms leads to the formation of the chemical bond.

The chemical bond is formed between two atoms either by sharing electron pair (s) or transferring the electron(s) from one atom to another atom. The electrons, which are used for the formation of chemical bonds, are valence electrons.

The valence electrons are present in the outermost shell or valence shell of an atom. The chemical bond in the molecule is classified as Ionic and Covalent Bond.

Ionic Bond: Ionic bond is formed when one atom transfers its electron to another atom, which in turn generates cation and anion, respectively. Transfer of electron takes place when there is a very large difference in electronegativity of two atoms and hence, they cannot share the electron pair.

In an ionic bond, two atoms are held together by the electrostatic force of attraction.

Covalent Bond: A covalent bond is formed when two atoms share the electron pair (s). The sharing of one, two, and three electron pairs between two atoms result in the formation of single, double, and triple bonds, respectively.

The polar covalent bonds may lead to the formation of the polar molecule or nonpolar molecule depending upon other factors, which we will study later in this article.

Now, what are polar or nonpolar molecules?

In Polar Molecules, there is an appreciable difference in the electronegativity values of atoms. A polar molecule will have a net dipole moment.

In nonpolar molecules, there may be or may not be a considerable difference in the electronegativity values of atoms. But the net dipole moment of the nonpolar molecule will be definitely zero.

As we said, the polar covalent bond may result in polar as well as nonpolar molecules. Then, how will we decide whether the molecule is polar or nonpolar?

For that, we have to discuss other factors, which cause polarity in the molecule.

Factors affecting Polarity in the Molecule

The polarity of the molecules depends upon three factors. 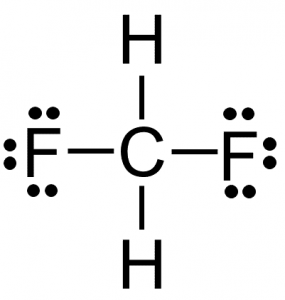 We will discuss these factors concerning the difluoromethane, CH2F2 molecule.

The carbon atom is the central atom in the CH2F2 molecule and other atoms i.e., Hydrogen and fluorine atoms, will surround it.

For this, you must refer to the article on the CH2F2 lewis structure.

Hence, we need to see the electronegativity difference between these bonds.

According to the Pauling Scale,

Electronegativity of the Carbon atom = 2.55

Electronegativity of the hydrogen atom = 2.20

Electronegativity of the fluorine atom = 3.98

The polar C-F bond acts as a dipole with a partial positive charge and a partial negative charge on the carbon atom and the fluorine atom in the CH2F2 molecule, respectively. Hence, the C-F bond will have a dipole moment.

The dipole moment is defined as

It is a vector quantity, which means dipole will have direction from positive pole to negative pole of it. The dipole moment of the C-F bond is 1.51 Debye (D) pointing towards the fluorine atom.

According to the Valence shell electron pair repulsion theory (VSEPR) and Valence bond theory (VBT), the CH2F2 molecule well matches with the AX4 geometry, and hence, the geometry of CH2F2i s tetrahedral, which is a symmetrical shape. 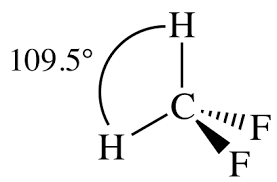 The symmetrical shape means that if there would be all C-H bonds or C-F bonds in a molecule, the net dipole moment will be zero as the dipole will cancel the effect of each other.

The weak dipole of the C-H bond cannot cancel the effect of the strong dipole of the C-F bond. Hence, the difluoromethane molecule will have a net dipole moment despite its symmetrical tetrahedral geometry. 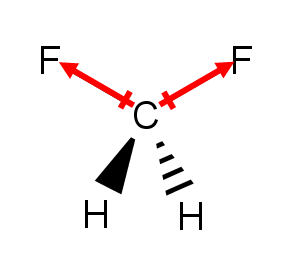 All the above-mentioned factors indicate that difluoromethane is a polar molecule. Hence, there will be dipole-dipole intermolecular forces between difluoromethane molecules.

The difluoromethane is a colorless gas and an important haloalkane with applications in refrigerators, air conditioners, and fire extinguishers.

Here, we have studied the polar nature of the difluoromethane molecule.

There are two C-F bonds and hence, the net dipole moment can be estimated by the vector addition of two C-F bonds, which comes out to be 1.97 D.

The net dipole moment and the large electronegativity difference of the C-F bond in the molecule suggest the polar nature of the difluoromethane molecule.

I hope you have understood the concept of polarity in the difluoromethane molecule. If you have still any doubt, feel free to ask.

Thank you very much for reading.