Carbon tetrafluoride, or tetrafluoromethane, is the simplest fluorocarbon, with very high bond strength. It is a colorless, non-flammable gaseous compound which falls under the category of haloalkane (a combination of halogen and alkane). Tetrafluoromethane acts as a useful refrigerant, but also adds to greenhouse gas contribution in the atmosphere.

So, is CF4 polar or non-polar? CF4 is a nonpolar molecule. Although all C-F bonds are polar because carbon and fluorine differ in their electronegativity, the overall CF4 molecule is non-polar. This is because of the symmetrical arrangement of all fluorine atoms around the central carbon atom. Therefore each individual C-F bond dipole cancels out each other resulting in the net-zero dipole moment of the entire molecule making it nonpolar.

Contents show
CF4 – Structure, Molecular Geometry
Characteristics of Non-Polar Compounds
Why is CF4 a nonpolar compound?
The Dipole Moment of C-F bonds
How structure affects the Polarity of CF4?
How is CF4 produced?
Properties of CF4
Uses of CF4
Possible greenhouse effects of Tetrafluoromethane

The molecular geometry of carbon tetrafluoride is tetrahedral, with the carbon atom at the center, surrounded by four fluorine atoms. However, the CF 4 molecule is arranged in two different planes.

While two C-F bonds lie in the plane of the paper, the other two do not. No lone pairs exist in the molecular structure of CF 4 and the aim is that the distance between the Carbon and Fluorine.

The carbon-fluorine bond length is typically around 1.32 Angstrom. The bond angle for each C-F bond is 109°28’, with sp3 hybridization (for the carbon atom).

Each Fluorine atom shares one electron around the carbon atom and hence all the octets are completed by sharing of electrons (both Fluorine and Carbon).

None the less, the sharing of electrons is not equal because Fluorine is much more electronegative than Carbon (electronegativity of Fluorine = 3.98, while that of Carbon = 2.55).

The absence of lone pair on the central atom gives a tetrahedral molecular shape to the molecule of CF4 (according to the VSEPR Theory).

For your reference, I have written a detailed article on CF4 Lewis Structure, Hybridization, and Geometry.

The polarity of a compound is the cumulative existence of a non-zero dipole moment in the molecular structure.

Non-polar compounds are characterized by a number of factors.

1.) Symmetricity: Molecules with symmetricity in their structures tend to have a net-zero dipole moment, even if there are dipole forces existing in individual bonds (between two atoms).

In symmetric molecules, usually, the result of individual dipoles come out to be equal in magnitude and opposite in their direction.

On these grounds, they cancel each other out (vector sum = 0) and hence eliminate the net dipole moment.

CBr4 is one such compound with the symmetric arrangement of all C-Br bonds. Here is the article to check out the reason for the non-polarity of CBr4.

Compounds with weaker forces to bind their molecular structures together have a propensity for being non-polar in nature.

The explanation for the same is simple. Vander Waal forces are weak enough to be disturbed easily and contribute to no significant charge amassing at the poles.

Stronger bonds, however, display some attractive and repulsive forces which cause partial charge imbalances.

3.) Charge Accumulation: Non-polar molecules are characterized by equal sharing of electrons forming a bond. In such a scenario, no partial charges are distributed on the atoms involved in bond formation.

Without any push or pull on the electrons, the charges are not accumulated or collected on either pole of the molecule.

Hence, there is no charge gathering in non-polar molecules.

4.) Electronegativity Difference: For a dipole moment to be considered significant, the difference in the electronegativity of the two atoms forming the bond must be greater than 0.4.

For electronegative differences below 0.4, the dipole moment generated is too little. Such low disparities do not contribute to the dipole-dipole interactions.

Whereas compounds like NCl3 having dipole moment 0.6 D is considered to be slightly polar. Chemistry is full of exceptions. Read out the article for the reason for the polarity of NCl3.

However, it is so possible that individual bonds in a molecule may be polar (due to electronegativity difference), but the resultant of all bonds may cancel out.

5.) Properties: Non-polar compounds tend to have low melting and boiling points because weaker forces require less energy to be modified.

Why is CF4 a nonpolar compound?

The Dipole Moment of C-F bonds

In CF4, each bond has its own individual dipole moment.

Because of a considerable difference in the electronegativity of Carbon and Fluorine, the fluorine atoms tend to pull the shared electron pair between C and F towards itself, fashioning an uneven charge distribution and leading to the formation of a dipole moment (with fluorine having a somewhat negative charge build-up and carbon left with a partial positive charge). 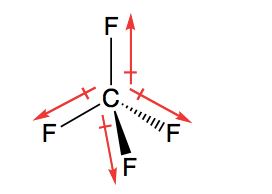 How structure affects the Polarity of CF4?

Whereas, the resultant dipole of the other two C-F bonds originates exactly 180° to the resultant of the same plane bond pairs resulting in the cancellation of both opposite dipoles.

In CF4, the main reason for the existence of non-polarity, despite the individual bonds being extremely polar, is the canceling of the dipole moments. 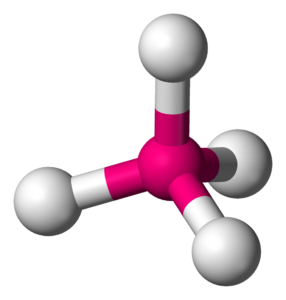 This call-off occurs due to the structural geometry of the molecule of the compound.

Hence, there are no dipole-dipole interactions in the molecule.

How is CF4 produced?

Tetrafluoromethane is formed during a number of processes.

1.) The reaction of graphite Carbon with fluorine leads to the formation of CF4 (Fluorination of Carbon).

2.) It can also be formed by a reaction of CCl2F2 or CCl3F with Hydrogen Fluoride (HF, in gaseous phase).

3.) It is a by-product of aluminum processing.

Tetrafluoromethane (CF4) is an exceedingly stable gas, which is colorless and non-flammable. It absorbs strong infrared radiations (~ 8 micrometers), and hence capable of influencing the greenhouse effect.

The gas has an atmospheric lifetime of around 50,000 years.

It is designated as PFC-14 (perfluorocarbon-14), the most abundant PFC in the atmosphere and its concentration is growing steadily, due to its widespread use as a refrigerant.

Structurally, CF4 is similar to CFCs (chlorofluorocarbons) but does not add up to the ozone layer depletion, due to the absence of chlorine atoms.

In CFCs, the chlorine atoms break down upon reacting with UV-rays and lead to exhaustion of O3.

However, in CF4, chlorine is absent and hence no such reactions occur which might weaken the ozone layer in the stratosphere.

C-F bonds are stronger and less likely to dissociate, and hence make it the most persistent greenhouse gas. It further contributes to long-term global warming effects.