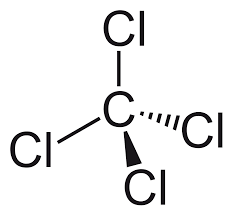 Carbon Tetrachloride having its chemical formula as CCl4 is an organic compound. It is a colorless liquid with a sweet smell. It is also toxic to the human body on its direct exposure. We will study the properties of CCl4 in detail. Chemistry students may have doubts about whether CCl4 is polar or nonpolar. So, In this article, I will answer this question and will cover the surrounding topics too.

SO, Is CCl4 polar or nonpolar? CCl4 (Carbon tetrachloride) is nonpolar in nature. Although the four bonds C-Cl are polar because of the difference in electronegativity of Chlorine(3.16) and Carbon(2.55), CCl4 is nonpolar because the bond polarity gets canceled with each other due to the symmetrical geometrical structure (tetrahedral) of the CCl4 molecule.

Carbon Tetrachloride is an IUPAC name given to CCl4 and it exists as a liquid state at room temperature. It produces a sweet odor that can be easily detected at lower levels.

It was discovered by Henri Victor Regnault in the year 1839.

CCl4 molecule has one carbon atoms attached to the four chlorine atom. All four bond C-Cl are similar as well as symmetrical to each other.

It is important to understand that symmetry of a chemical compound is a very important factor in determining the polarity of a compound.

It can be understood because Carbon and Chlorine atom have a different value of electronegativity ie (C= 2.55, Cl= 3.16). Making the C-CL bond a polar covalent bond.

Therefore all four C-Cl bonds have a dipole moment value as well. But due to the symmetry of all four bonds, the dipole moment of the C-Cl bond gets canceled by the opposite C-Cl bond. As a result, the net dipole moment turns out to be zero making the CCl4 a nonpolar molecule.

Methane gas (CH4) does also has the same structure as CCl4.

Contents show
What are Polar and Nonpolar Molecules?
Why CCl4 is Nonpolar?
Factors affecting polarity of a compound
Geometrical Structure of CCl4
Synthesis of CCl4
Physical and Chemical properties of CCl4
Uses of CCl4
Conclusion

It is to be noted that a molecule is considered to be polar if the net dipole moment of that molecule is zero. However, It is possible to have the existence of a polar bond within a nonpolar molecule.

Polar molecule: These are the molecules that have some positive value of net dipole moment. These molecules also have asymmetric geometrical structures. A chemical bond is said to be polar if the charges are not equally distributed over both atoms forming that bond. The electrons are not equally shared among both atoms.

In such chemical bonds, the electron pair gets slightly pushed towards the more electronegative atom among both atoms. Due to the difference in electronegativity and asymmetric geometry, these molecule becomes polar.

Non-Polar molecules: The molecules that have net dipole moment as zero is a nonpolar molecule. In these molecules, the geometrical structure is also symmetric.

Among two atoms forming a chemical bond, that bond is said to be polar if the charges are equally distributed over both of them that means the electrons are equally shared by both of the atoms.

Why CCl4 is Nonpolar?

The CCl4 is nonpolar in nature because of the symmetrical tetrahedral geometrical structure. Although the C-CL bond is polar in nature as Carbon and Chlorine atoms have a difference in their electronegativity.

As a result, the C-Cl bond also has a dipole moment. But due to symmetrical structure, the net dipole moment gets canceled with each other forming CCl4 (Carbon Tetrachloride) a nonpolar molecule.

The polarity of a molecule depends upon the various factors discussed below.

But it is very important to know that molecule having polar bond within itself can also be nonpolar because of its symmetrical structure. In such cases, the polarity of bonds canceled out with each other.

Geometrical Structure: The molecule having its symmetrical geometrical shape is nonpolar in nature. The net dipole moment value turns out to be zero for symmetrical molecules.

If we talk about the geometrical structure of tetrachloromethane, the four bonds C-Cl lie at symmetric orientations relative to other C-Cl bonds. The carbon atom is the central atom connected with four C-Cl bonds.

The carbon atom has four electrons in its outermost shell and all four bonds participate in the formation of covalent bonds formed with four chlorine atoms leaving behind no lone pair on the carbon atom.

The CCl4 forms the tetrahedral geometry and the bond angle in the CCl4 molecule is around 109.5 degrees.

All the non-bonding electrons in CCl4 tends to create a repulsive force among each other resulting in the bond angle of 109.5 degrees with each other and resulting in a tetrahedral shape. 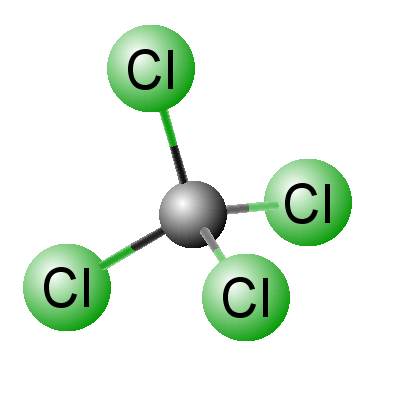 The formation of tetrachloromethane is done in the year 1839 by the French chemist Henri Victor Regnault. It was synthesized by reacting chloroform and chlorine.

But nowadays, the process of synthesizing tetrachloromethane is done by treating methane with chlorine. The reaction is given as below

Before the 1950s, the process of manufacturing carbon tetrachloride was done by treating carbon disulfide with chlorine at 105 to 130 degrees Celcius.

Physical and Chemical properties of CCl4

The molecule of CCl4 is nonpolar in nature because of its symmetrical tetrahedral structure. However the C-Cl bond is a polar covalent bond, but the four bonds cancel the polarity of each other and form a nonpolar CCl4 molecule.

So, In this article, I tried to cover the nonpolar nature of Carbon Tetrachloride molecule(CCl4). If you guys have any questions regarding this, you can ask that in the comment section below. We will reach out to you as soon as possible.