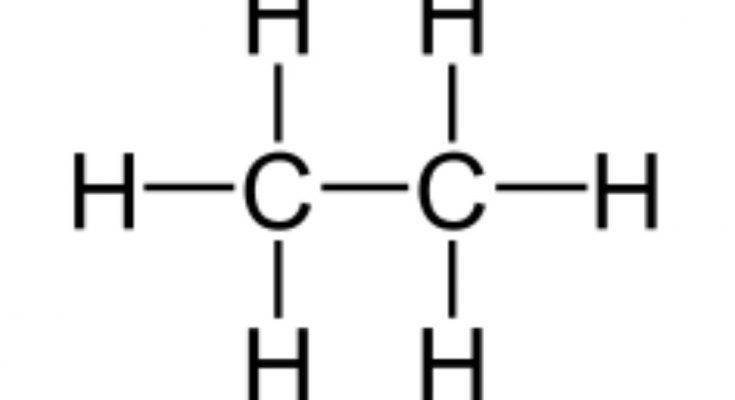 Ethane is an organic chemical compound with a molecular formula C2H6. Ethane can be thought of as a dimer of two methyl groups linked together. It is a colorless, odorless gas at normal temperature and pressure.

Ethane, like many other hydrocarbons, is extracted commercially from natural gas and as a petrochemical by-product of petroleum refining. It is primarily used as a feedstock for the production of ethylene.

Most of the students wonder if Ethane is polar or non-polar. In this blog, I will provide you with clear answers to this question and discuss the concepts of non-polar covalent bonds in detail.

So, is Ethane (C2H6 ) a polar or non-polar covalent compound? Let’s find out in the next section.

Ethane is non-polar in nature because the electronegativity difference between Hydrogen and Carbon atom is very less making a C-H bond nonpolar. Moreover, there are no lone electron pairs, there is no shape distortion or pushing of electron pairs due to repulsive forces. This results in zero dipole moment, rendering Ethane a nonpolar molecule.

Well, that was a crisp answer. Now let me discuss the non-polar nature of Ethane in detail.

Before going ahead in detail about the non-polarity of Ethane, If I talk about its formation. Ethane can be easily synthesized in the lab using Kolbe electrolysis.

Ethane is produced when sodium and methyl bromide or methyl iodide is heated in the presence of dry ether.

Before we dig into the details of non-polar covalent bonds in Ethane, let’s start from the basics. First, we need to understand the concept of electronegativity.

An atom’s ability to draw a mutual pair of electrons towards itself is known as electronegativity. It doesn’t have any units because it’s just a tendency.

The various forms of covalent bonding are largely determined by electronegativity.

In the coming sections, I will show you what features make a covalent bond polar or non-polar.

A non-polar covalent bond is a type of chemical bond that occurs when two atoms share electrons equally. When atoms that share a covalent bond arrange themselves in such a way that their electric charges cancel each other out, this type of bond is formed.

In a non-polar covalent bond, the difference in electronegativities of the bonded atoms is usually very small. It also means that there is no charge separation between those two atoms or that their electronegativity is identical.

All of the following conditions will be met by a nonpolar molecule:

A polar covalent bond is formed when two atoms share electron pairs unequally. According to the Pauling scale, the electronegativity gap between the bonded atoms should be greater than 0.4.

A polar covalent bond is a bond formed between two atoms in which the electrons are distributed unevenly. The molecules appear to have an electrical dipole moment as a result of this condition, with the two ends slightly positive or negative.

Now let’s discuss the features of non-polar covalent compounds and the factors which make a covalent bond polar or non-polar.

As a result, no bond or dipole moment exists between the atoms of a molecule, and no charges form on the atoms, rendering the molecule non-polar and non-conducting.

Methane is one such similar compound. Read out the article on the polarity of CH4.

The polarity of a covalent bond is determined by the following factors:

Let’s look into each of these factors with reference to Ethane.

There are 2 carbon atoms with 3 hydrogen atoms surrounding each carbon atom.

According to the Pauling Scale,

Electronegativity of the Carbon atom = 2.55

Electronegativity of the hydrogen atom = 2.20

For a covalent bond to be called a polar covalent bond, the electronegativity difference should be at least 0.4. Hence, the C-H bond and the C-C bond are nonpolar.

A physical quantity called Dipole moment (μ) describes the polarity of a covalent bond. The product of charge and charge separation distance is known as the dipole moment. The unit of the dipole moment is Debye (or) esu cm, and it is denoted by the symbol μ.

To achieve a stable structure, each hydrogen atom needs one electron. Carbon, on the other hand, needs four more electrons to complete its octet.

Each Carbon atom has three Hydrogen atoms with which it forms bonds and shares electrons. As a result, each Hydrogen atom now has two electrons in its outer shell, making it more stable

There are no lone pairs or nonbonding pairs of electrons since all of the valence electrons are used up to form the molecule’s stable structure. In this molecule, the electrons and atoms are symmetrically arranged.

You must refer to the article specifically written on C2H6 Lewis Structure.

Both carbons are sp3-hybridized, which means they have four bonds in a tetrahedral arrangement. The C-C bond is created by the overlap of one sp3 orbital from each of the carbons.

The six carbon-hydrogen bonds are formed by the overlap of the remaining sp3 orbitals of the two carbons and the 1s orbitals of hydrogen atoms. Thus ethane has a tetrahedral geometry with a bond angle of 109.5 degrees.

The symmetric geometry of ethane cancels out the dipole moments and renders it non-polar. Considering all these three factors, it can be concluded that Ethane is a non-polar molecule. 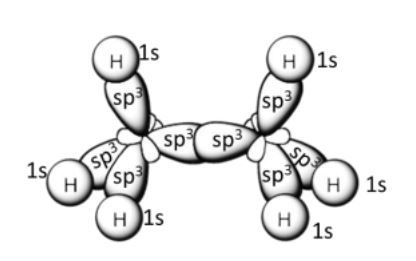 Ethane is a saturated hydrocarbon that occurs in gaseous form. After Methane, the second most basic alkane is Ethane. It is a non-polar molecule owing to its symmetrical shape and zero dipole moment. Ethane does not dissolve in water due to its non-polarity.

In this article, I have discussed the basic concepts of non-polar covalent bonds and the nature of bonds in Ethane. Please feel free to ask any questions you may have in the comments section. We will respond as soon as possible