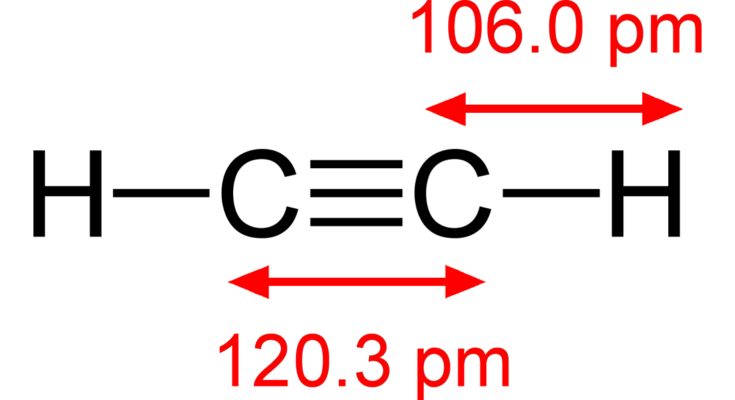 Ethyne, (commonly known as Acetylene), is a chemical compound with the molecular formula C2H2. It is a colorless gaseous chemical compound and the simplest alkyne i.e. an unsaturated hydrocarbon with a triple C-C Bond. Generally, acetylene is used as a fuel and a chemical building block. All the four atoms are placed in a single line with the hydrogen atoms at the corners and carbon atoms with a triple bond between them, in the center. The bond angle is 180°.

So, is C2H2 a polar or a non-polar molecule? C2H2 is nonpolar in nature because the electronegativity difference between Carbon and Hydrogen is 0.35, which is less than the minimum required 0.4. Furthermore, it has a linear molecular structure and the nature of C-H bonds is non-polar covalent. This makes the complete C2H2 molecule a non-polar molecule, with a net zero dipole moment.

Contents show
The polarity of A Molecule
About Acetylene (C2H2)
Hybridization and Bond Formation in C2H2
Molecular Geometry of C2H2
Preparation of Acetylene
Why C2H2 is Non-Polar?
Properties of Acetylene
Applications of C2H2
Conclusion

The polarity of A Molecule

A bond is said to be polar when one of the two atoms forming the bond is somewhat more electronegative than the other, and the positive and negative charges are not uniformly distributed across the molecule.

There is a shift in the charge cloud towards the more negative atom, resulting in the development of some considerable net dipole moment across the molecule.

The existence of this dipole indicates that the concerned molecule is polar.

Factors influencing the polarity of any molecule are:

However, for non-polar molecules:

Acetylene was first discovered in 1836 by Edmund Davy, was an accidental discovery while trying to isolate potassium metal.

By heating potassium carbonate with carbon at very high temperatures, a residue of potassium carbide (K2C2) was produced. This reacted with water to release the new gas C2H2.

Hybridization and Bond Formation in C2H2

The electronic configuration of carbon is 1s2 2s2 2p2. In the excited state, one electron from 2s orbital jumps to 2pz, changing the configuration to 1s2 2s1 2px12py1 2pz1.

Due to the presence of hydrogen with 1 atom, the 2s and 2pz orbitals are hybridized. There are resultant four s-p hybridized orbitals. 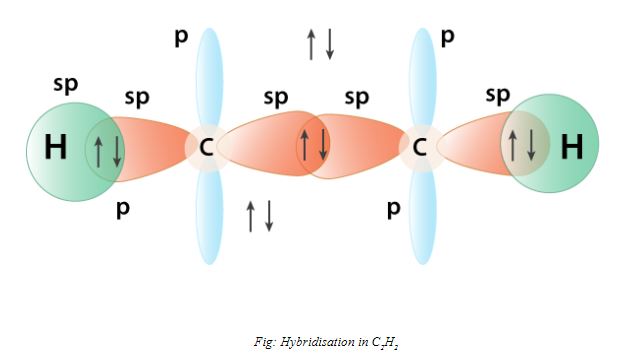 There are two orbitals for each carbon atom and one of these is used by the Hydrogen atom to form a sigma bond with Carbon, while the other is used to form a C-C sigma bond by overlapping.

Now there are two half-filled p-orbitals with each Carbon, which do not undergo hybridization.

These p-orbitals result in the formation of two pi-bonds between the carbon atoms. 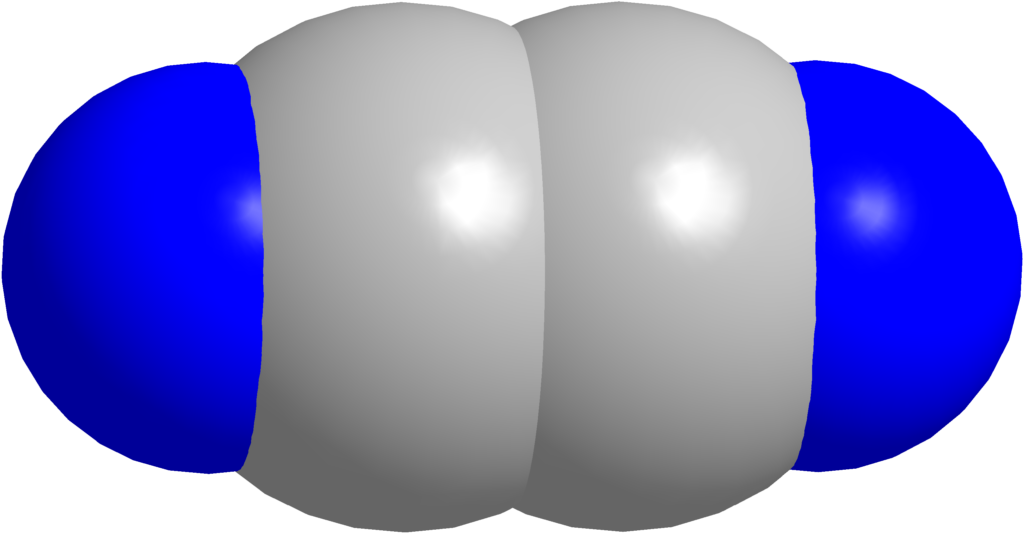 The resultant molecular structure for acetylene is linear, with a triple bond between the two carbon atoms (one sigma and two pi-bonds) and a single sigma bond between the carbon and hydrogen atoms.

A popular reaction often associated with the production of C2H2 is the hydrolysis of calcium carbide. The chemical equation for the same is as follows:

An alternate method of preparation of the non-polar ethyne is partial combustion of methane. The reaction can be depicted as follows:

On large scale, this process of manufacture for acetylene is preferred due to feasibility and ease of formation.

There are multiple parameters that have been considered to establish the non-polar nature of the acetylene (C2H2) molecule. These can be explained as follows:

1.) Electronegativity difference: The elements involved in the formation of acetylene are carbon and hydrogen.

The individual electronegativity of carbon and hydrogen is 2.55 and 2.20 respectively. Thus the difference in electronegativity is 0 for the C-C bond because both elements are the same and 0.35 for each C-H bond.

This number, however, is less than 0.4 (minimum required value), thereby indicating that the bonds making up the ethyne molecule are non-polar in nature.

2.) Structure: The molecule has a linear structure, owing to the rigid triple bond between the two carbon atoms.

The C2H2 molecule is made of two sigma-bonds and two pi-bonds, with a bond angle of 180 degrees. This linear molecular geometry is similar to that of CO2 (Carbon dioxide), which is also a non-polar compound.

3.) Charge Distribution: Due to low electronegativity difference, presence of rigid triple bond, and a linear symmetric structure, the charge is distributed around the molecule in a pretty uniform (or even) fashion.

Hence, there is no significant charge amassing at the poles of the molecule.

Hence, due to these properties of the molecule, C2H2 falls under the category of the non-polar molecule, with all the bonds being non-polar covalent.

The non-polar compound ethyne has a number of applications as listed below:

Welding: It is a substance with an extremely hot flame, and serves as a suitable fuel for welding purposes. It lends itself easily to brazing, metal heating, loosening of corroded nuts and bolts, etc.

Plastic and acrylic derivatives: It can be semi-hydrogenated to ethylene, thereby providing feedstock for a number of polythene products. Conversion to acrylic derivatives for the production of products such as acrylic fibers, glass, polymers, etc. is also an important application.

Portable lighting lamp: Acetylene or carbide portable lamps are used extensively for mining purposes. In those lamps, calcium carbide and water react to produce acetylene. However, the flow of acetylene in such lamps has to be monitored to ensure safety.

Anesthesia: In the 1920s, pure acetylene was experimentally used as an anesthetic, and is still considered to form safe anesthesia.

Conclusively, it is clear that acetylene (C 2 H 2 ) is a non-polar gaseous alkyne compound. The non-polar nature is due to its linear structure and formation of covalent bonds with equal sharing of electrons. Ethyne/Acetylene has some irregularities in its physical properties but is a widely used chemical compound, owing to the high amount of heat it can generate.