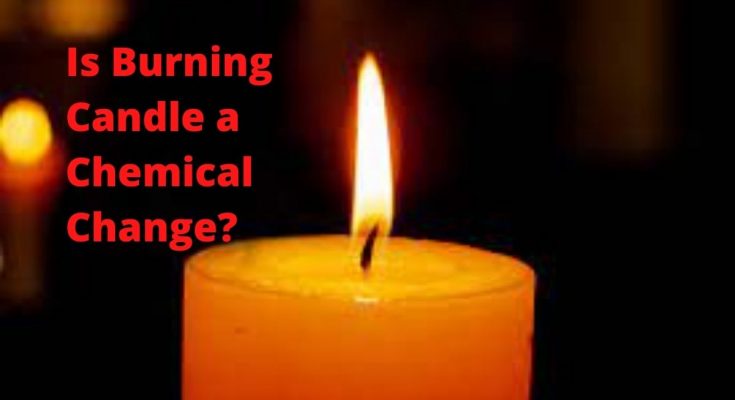 A chemical change is one where the substance reacts with another to form one or more new substances. in general, this is termed chemical synthesis or decomposition.

I know what you might be thinking that why I am talking about chemical change when we are burning a candle. Yes, I have the same question floating in my mind. But trust me this is a really hot topic amongst all chemistry students and also the general public.

The chemical change is one of the important terms of chemistry. But if you don’t know what chemical change actually is then it might be a little difficult for some of you.

Let us learn more about what is a chemical change.

What is a Chemical Change?

A chemical change is usually an irreversible reaction that involves the rearrangement of one or more substances and change in their chemical properties or composition, resulting in the formation of at least one new product.

When a substance combines with another substance or decomposes itself for the formation of new products, this is defined as the chemical change or also described as a chemical reaction.

Such changes are irreversible and permanent, thus chemical changes cannot be reversed by changing or altering the experimental changes except by further chemical reactions.

A chemical change is accompanied by a change in mass and energy. During a chemical change, the substance either gains or loses its mass. And also there is either loss or gain in energy due to the breaking of some bonds in reactants and the formation of new bonds in the product.

Some examples of chemical change are, burning of wood or paper, souring of milk, burning of candles, digestion of food, and so on.

The physical change is accompanied by the change in the arrangement of molecules which leads to a change in state. No new products are formed, and also the composition of the matter remains

totally the same. For example, in freezing water, the molecular composition of ice is the same as that of water.

The chemical change is differentiated from the physical changes by the following points:

Why is Burning a Candle a Chemical Change?

The phenomenon of burning a candle is a chemical change because during burning the oxygen from the air reacts to form carbon dioxide.

The formation of carbon dioxide which was earlier not present is evident in the fact that the burning of a candle is a chemical process.

The burning of the candle is permanent because once it is burnt it cannot be recovered into the candle. A new product is also formed with a composition different from the candle. Hence it is a chemical change.

Burning is a chemical process that occurs due to oxidation and thus produces heat and light.

When a candle burns in the air, it combines with oxygen, hydrogen, carbon, and other gases due to which the mass of the product increases and leads to the formation of carbon dioxide and water vapor. 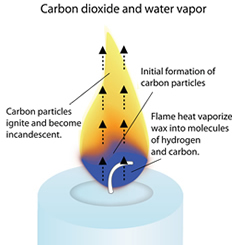 Why is Burning a Candle not a Physical Change?

The burning of candles is accompanied by the formation of new products and the release of heat and light.

The mass of wax before and after melting remains the same and on cooling down the wax solidifies as before. Therefore the change is reversible, hence the melting of wax is a physical change. 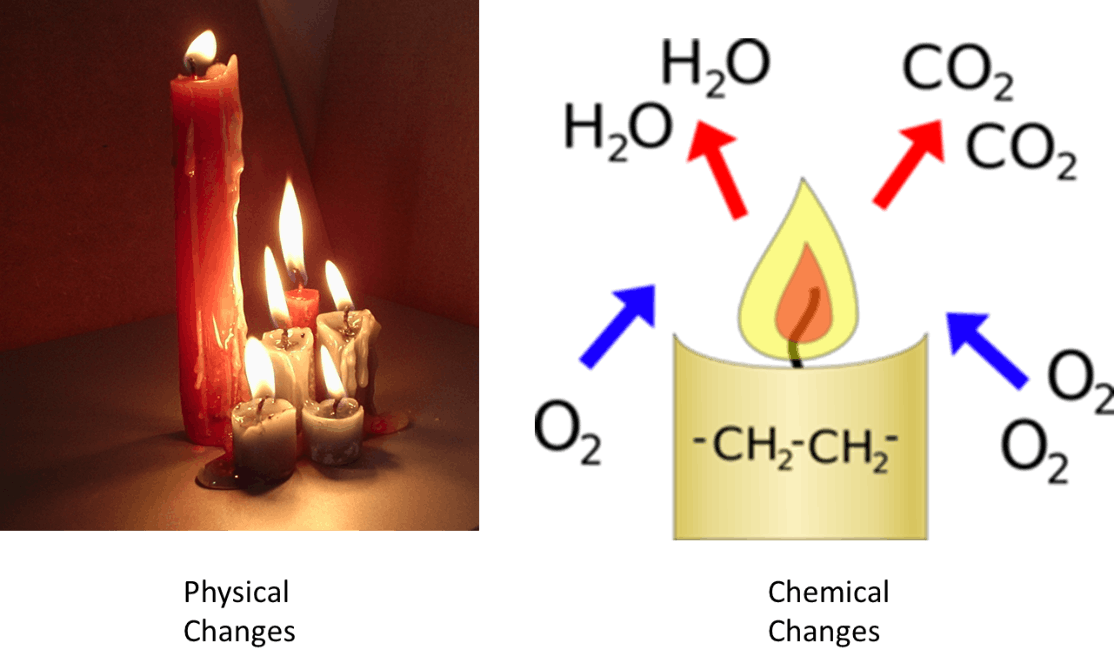 Candles are generally composed of hydrocarbons which include carbon and hydrogen. The burning of candles is powered by combustion.

When the wick is lighted, the wax which gets melted is drawn up towards the wick through capillary action as the wick is a natural absorbent.

The heat of the flame vaporizes the wax into gas and these gas molecules react with the oxygen from the air to form carbon dioxide, water vapors, and heat, and light. The wax acts as fuel during the entire reaction. 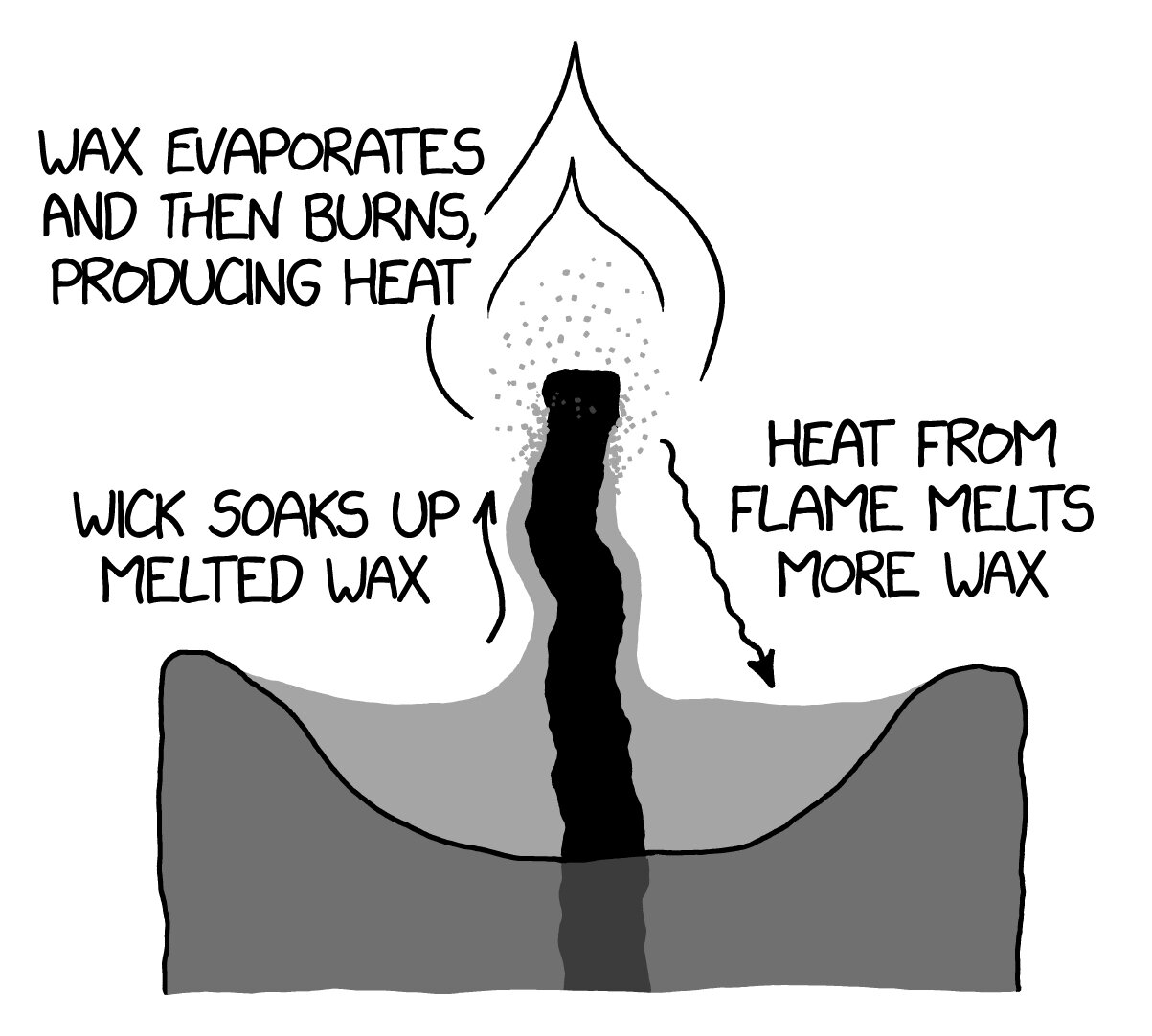 The flickering of flame or smoke while burning a candle at first may be observed because it takes some for the combustion to stabilize.

The flame has four differently colored regions which describe various reactions occurring in the different regions.

The blue colored innermost region is the oxygen-rich area where the hydrocarbons vapourize into carbon and hydrogen. Hydrogen is the first to react with air and form water vapors and a small amount of carbon burns to form carbon dioxide.

The second layer is the brown layer where various other forms of carbon break down and settle and this region has relatively less oxygen content.

The next layer is the yellow colored region where the formation of soot i.e. unburnt carbon increases. This is the most dominant region of a candle flame and therefore the human eye perceives the flame as yellow. 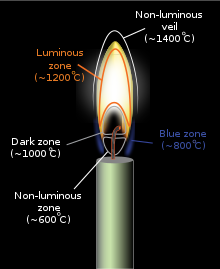 Check out the intersting video on how candles work.

A reaction can be exothermic or endothermic based on whether the energy is released or gained.

The burning of a candle is an exothermic reaction as energy is released during the reaction in the form of heat and light.

The exothermic nature of the reaction also describes that the amount of energy required to break the bonds in reactant molecules is less than the energy released during the formation of bonds in products. 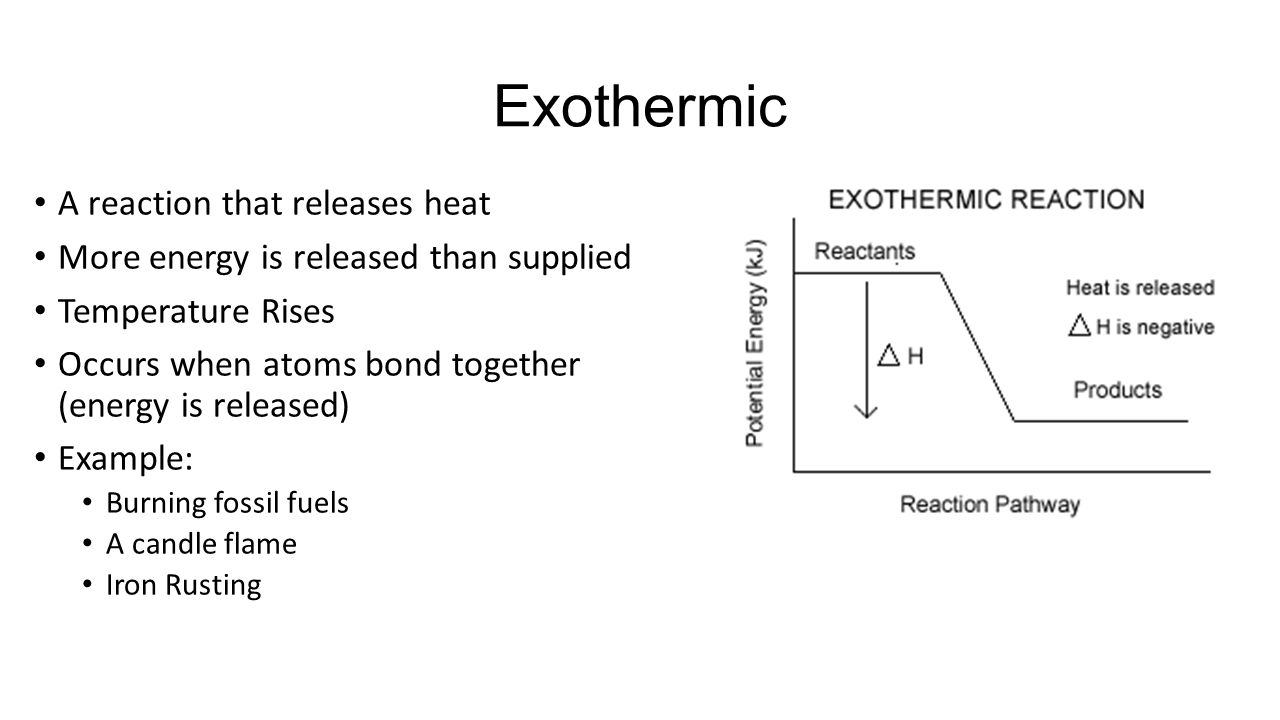 Is Burning Paper a chemical change

Is Baking cake a chemical change

Is Melting endothermic or exothermic

In conclusion, we can say that the burning of a candle is a chemical change as new products are formed. A chemical change is characterized by the formation of new substances, change in mass and energy of the substances, and the reaction is irreversible.

A candle burns on the principle of combustion in the presence of oxygen where due to capillary action the wax vaporizes to react with oxygen from the air to form carbon dioxide and water vapors. This reaction of the burning of a candle is an exothermic reaction as energy is released in the form of heat and light.

The burning of a candle is thus a chemical change.