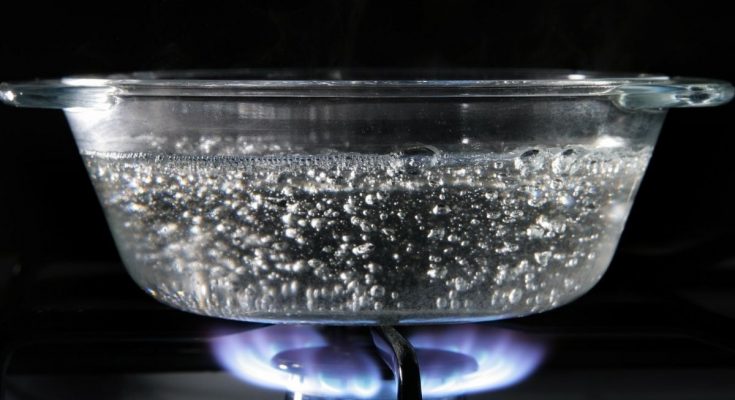 Almost every day in our lives, we boil water for cooking or to make it potable. But what exactly is boiling? Boiling is heating a liquid sample till the temperature when all liquid is converted to vapor.

Boiling is a bulk phenomenon in which all the molecules (not only the ones at the surface) participate in the process.

This article will discuss whether boiling water is a chemical or physical change, and we will understand the difference between the two types of changes and properties.

We will also see the factors which affect boiling point and the difference between boiling and evaporation.

Read out the below subheadings for more detailed information.

Why is Boiling Water not a Chemical Change?

The answer to this question can be answered only if we know what happens during the process of boiling.

For boiling of water to take place, heat has to be provided from an external source. Initially, on heating water, there is a temperature rise.

The kinetic energy of water molecules increases, and they collide with each other. When the temperature equals the boiling point of water, all the water molecules no longer remain in the liquid state.

The water molecules use the heat provided at boiling point to change their physical state, and the temperature remains the same.

The temperature remains constant during boiling even though heat is continuously provided because heat is a form of energy and liquid water needs some energy called enthalpy of vapourization to change state from liquid to vapor.

Throughout the process of boiling, no chemical reaction takes place. No new compound is formed. The change is reversible as well.

These characteristics help us infer that the boiling of water is not a chemical change.

Is Boiling Water a Physical Change?

This is because the chemical composition of water does not change throughout the process of boiling.

Moreover, the process is reversible. Liquid water can be obtained back just by cooling the vapors. 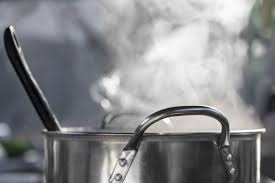 In chemistry, whenever a reaction takes place, there is a change. The reactants change into products.

The change can be classified as physical and chemical.

The difference between the two is summarized below.

What are Physical and Chemical Properties?

The properties which can be measured without changing the chemical composition of a substance are physical properties.

For example – the size of a substance can be measured without altering the chemical composition.

Physical properties are further classified as intensive and extensive.

For example- the volume of a substance changes on changing mass.

The properties that cannot be measured without changing a substance’s chemical composition are called chemical properties.

These are generally studied by examining the reactions of a substance with air, water, acid, base, or any other chemical. They study if the substance can undergo a chemical reaction.

For example- we can study the reaction of hydrogen with a substance only if the product formed has a different composition.

If the composition is the same, this implies that a chemical reaction does not take place.

Phase is a homogeneous and distinct state of a system. There is no visible boundary separating the phase into parts.

For instance- solid ice is one phase, but when some of it melts and remains in equilibrium with water, there are two phases.

If a substance has different physical states at different temperature and pressure conditions, the states can be represented by a phase diagram.

A phase diagram is a graphical representation with pressure on the y-axis and temperature on the x-axis. 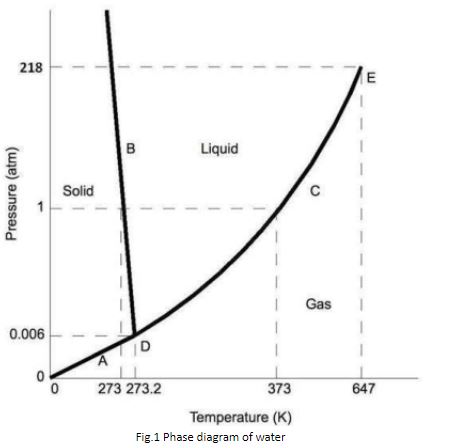 • A phase diagram is divided into 3 areas. Each area has only one phase.

In the area between the y-axis and ODB, only ice is present.

In the area between the x-axis and ODC, only water vapor is present.

In the area EDB, only liquid water is present.

• The lines have two phases in equilibrium.

• At the point of intersection of three lines (D), all three phases co-exist, and this temperature and pressure are called the triple point.

• The slope of the line representing solid and liquid equilibria is negative. This implies that the melting point decreases with increasing pressure.

This is also the reason for the fact that ice is less dense than liquid water.

• The slope of the line representing liquid and vapor equilibria is positive. This implies that the boiling point increases with an increase in pressure.

Phase Transition for Boiling of Water

During the boiling process, there is a transition in the phase of water from liquid to vapor.

When all the liquid has not converted to vapor at boiling point, the equilibrium can be represented by line DC. The external heat provides energy for phase change.

The transition from liquid to vapor suddenly increases the volume.

When the temperature equals the boiling point, the liquid phase starts converting to vapor, and an equilibrium exists between two phases (liquid and vapor).

All the liquid is converted into vapor on heating continuously, and again there is only one phase.

The boiling point of a substance is not a universal constant. It can be altered by changing the conditions like atmospheric pressure and vapor pressure of the liquid.

The external temperature affects the vapor pressure, which in turn affects the boiling point.

Elevation in boiling point is observed if a non-volatile solute is added to the liquid under study. The solute affects the vapor pressure. 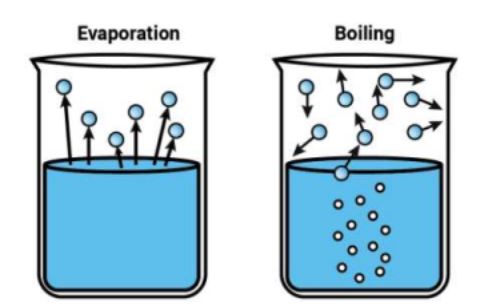 Boiling and evaporation are often confused with each other.

There is a change in state in both the processes, but they are pretty different.

1. Pressure cookers are meant for hilly areas. In hilly regions, altitude is high and atmospheric pressure is less.

Due to these conditions, the boiling point of water is low and converted to vapors before the food is cooked.

Thus, to increase the boiling point, pressure cookers are used.

They increase the external pressure on water which in turn results in higher boiling points and well-cooked food.

People also use pressure cookers in plains to fasten the process of cooking.

2. We have discussed that non-volatile solute increases the boiling point of the liquid.