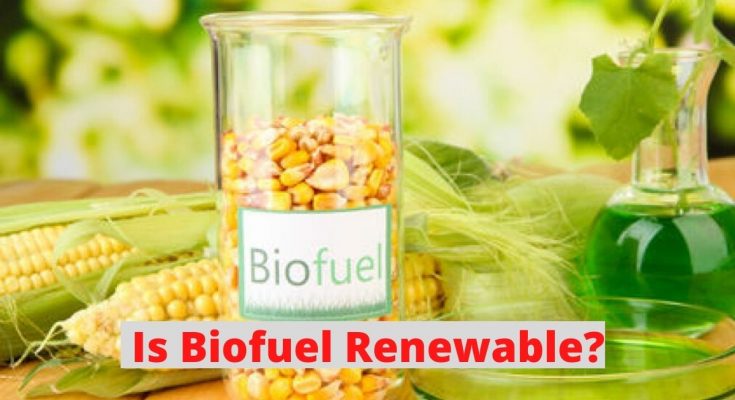 Weather predictions are becoming more and more complex with each passing year due to global warming. Taking that into account, many governments ought to increase sustainability by reducing emissions and implementing plans to increase the use of biofuels.

Biofuels have the potential to reduce greenhouse gas emissions while also being renewable energy sources.

Biofuel is renewable. This is because you can renew them at the same rate as you use them. Hence, biofuels can be made from live feedstock and organic waste, and they are a good way to recycle waste and reuse it in a useful way. They consist of water resources, land, and food resources. Thus, switching to biofuel is definitely going in the right direction.

Biofuels’ inventions replaced the use of fossil fuels such as petroleum, natural gas, etc. With an unlimited supply, biofuels are less harmful to the environment and can be reused time and time again.

But before we dive into understanding renewable energy, let’s first check out how biofuels are produced.

Biofuel is similar to natural fossil fuels. You can burn them both to produce energy. The main distinction between them is that biofuels can cause uncertainty and, for the most part, cause less harm to the planet.

Initially, biofuels were made from sugar crops and animal fats. The sugar and starch crops ferment to create bio alcohol.

These processes include the production of ethanol and propanol. Animal fats and oils were later processed into biodiesel.

The general methods for conversion include deconstruction, which involves breaking the biomass down into chemical components.

The process of deconstruction is very diverse and depends on the components and sizes. The specified temperatures separate the components that will yield proper results.

The components are first filtered to eliminate all food particles. Then the actual process begins, which is called transesterification.

Here the fatty acid molecules of the feedstock oil break from the glycerin and then each molecular fatty acid attaches itself to another alcohol molecule. A catalyst is added later to increase the reaction of the particles.

Before adding the oil, blend the alcohol with the catalyst for biofuel generation. The catalyst then breaks down the alcohol and the blend is mixed until then. Potassium hydroxide and sodium are the most widely used basic catalysts for breaking down biofuels.

Another form of conversion is thermo-chemical. This conversion of biofuels includes gasification and pyrolysis. They are different in the process of temperature and the amount of oxygen present.

Let’s take a look at the different types of biofuels that are being produced all over the world to help bring about a sustainable future.

What differentiates biofuels is the way that they are synthesized. The resulting products are later refined to deliver fuel to cars or other vehicles.

Two major types of biofuel derived from their process from organic materials are as follows: 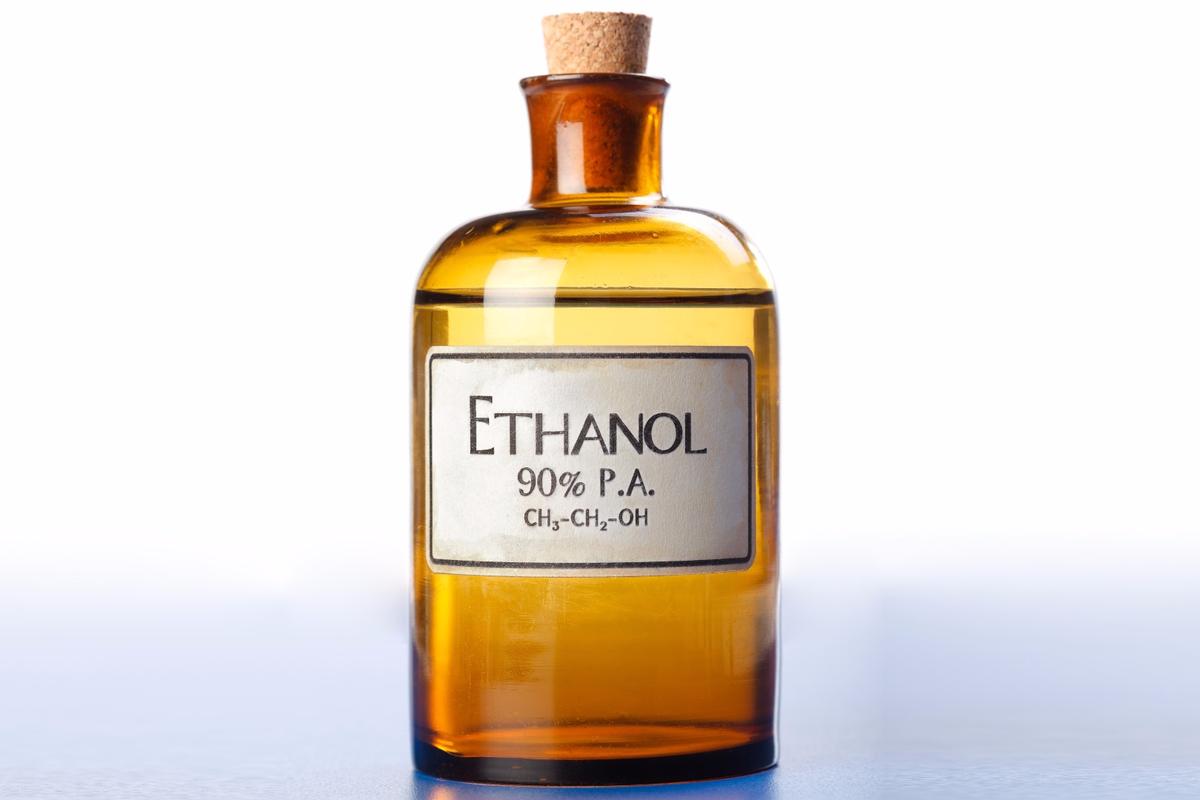 Ethanol is a plant-based organic material. Ethanol is produced by fermenting starch or sugar.

Fermentation breaks down cellulose in the fibers of plants. Ethanol is an alternative to gasoline. It is relatively low-cost, emits less pollution, and has more availability.

Ethanol is less harmful than gasoline and is easier to source since it comes from vegetables and animal fats. As a result, it benefits both farmers and the economy.

Another natural renewable energy source is biomethane. You can not only use this for electricity generation and heat, but also for transportation like ethanol. As biomethane is a renewable fuel, you can also use it to balance irregular renewable power.

Biomethane prevents the release of a huge amount of methane and other harmful gasses into the atmosphere.

In addition, biomethane diminishes the need for fossil fuels, which means it decreases the emission of greenhouse gas into the air. Biomethane is chemically identical to natural gas.

So you can use it in the same way you would use natural gas. Biodiesel is the most widely used liquid biofuel. It’s produced from oily plants like soybeans and palm oil.

Biodiesel and petroleum diesel fuel can both be used in diesel engines. Biodiesel can be made by combining animal fats and vegetable oils with alcohol in a trans-esterification process.

This process involves breaking down glycerin to release fatty acids, which then react with alcohol particles to form biodiesel. Biodiesel is a non-toxic, biodegradable substance.

The Problems with Using Biofuel

Instead of using ordinary fossil fuels in heating and transportation exercises, we now use biofuels as a substitute.

Biomass continues to be a vital fuel in numerous countries, particularly for cooking and warming in developing countries.

The use of biofuels for transportation and power generation is also expanding in numerous developed countries to decrease carbon dioxide emissions into the air.

However, some of the major problems with using biofuels are:

And the same goes for biofuel. As the demand and production of biofuel increased, the need for land to carry out the process of production also increased.

And as our population rises so will the need for biofuel. We are already in the midst of a land crisis whether it be for housing, farming, or production. And biofuel just adds to that.

Unsurprisingly, producing more biofuels has increased the need for food. As production for biofuels is increasing there is also a need to use more and more food resources, plants, and animals for production.

The use of more food resources and supplies to produce biofuels is later waste leading to food scarcity in the economy.

Biofuel is not only taking up cultivating space, but it is also decreasing the accessibility of certain food sorts.

Biofuel production uses up a lot of lands causing biodiversity loss. There will be little greenhouse gas emissions taking place in the area due to biofuel production. The surrounding area will become an inhabitant of species and plants.

For deforested land for crops to grow, there will be a need for increased water and fertilizer supplies. This will lead to higher carbon emissions in the surrounding area.

The cost of biofuels has increased as technology has evolved to make the production process more efficient.

With different inedible food crops being used, each form of the component had to be greater in number.

Energy from renewable resources puts less strain on fossil fuels. However, they are very hard to extract and are also considered very expensive to produce and complicated to assimilate.

The world’s energy demands continue to increase as we utilize more and more machines in our daily lives.

Even with the expenses that arise with producing biofuels, they are far less than the damage greenhouse gasses do to the environment and atmosphere.

Biofuels are renewable, but the process and production they undergo are unsustainable. Water preservation practices and sustainable management will require specific consideration. 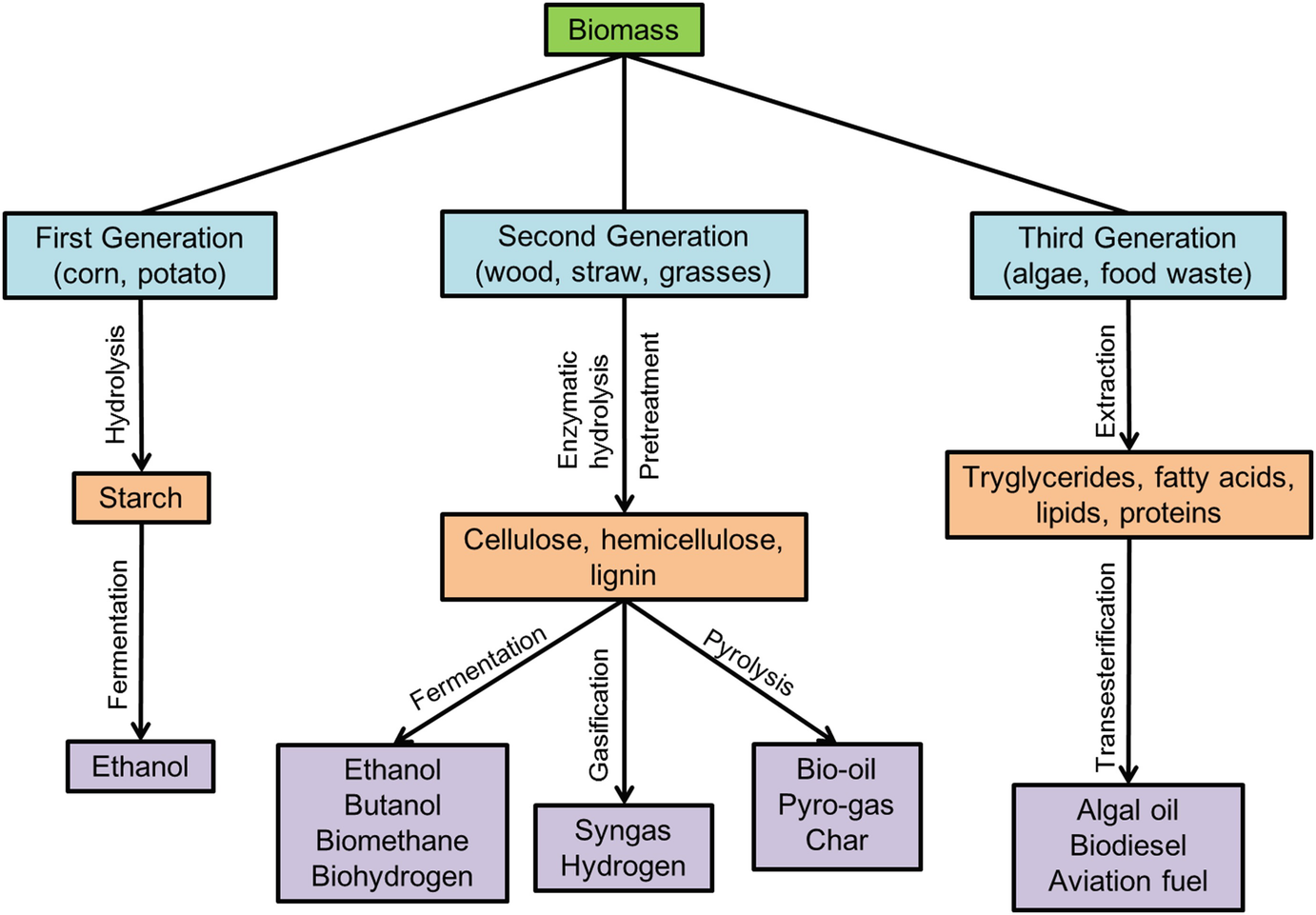 The first generation of biofuel production had many limitations. These limitations caused a number of questions to arise, such as the longevity of sustainability using biofuels.

Large areas of land were needed for the production of food sources, animals, and plants, and this caused deforestation, food scarcity, and excessive land.

Cellulosic ethanol is a second-generation biofuel.

The production of these biofuels is made from high cellulose content, which comes from inedible food crops or food that is considered wastage.

The resources used for these biofuels are fruit skins, wood chips, etc. Thus, second-generation biofuels are easy to produce

A few algal species can emit sleek substances. Production of biofuels from algae ordinarily depends on the lipid substance of the microorganisms. Biofuels utilize these substances and help produce energy.

Algae create biofuel much quicker and on a decreased land surface as compared to lignocellulosic biomass. There are numerous challenges related to algal biofuel, some topographical and a few specialized.

This is the newest generation of biofuel technology. With the combination of an emerging technology known as carbon capture and storage, carbon dioxide can finally be removed from the atmosphere.

This will help prevent global warming and lead to better soil for the production of resources, which will then again be used for renewable energy.

With less carbon dioxide in the atmosphere, the greenhouse effect and greenhouse gas emissions will decrease.

Interesting posts you must read

can you recycle laminated paper

can you recycle egg cartons

Biofuel is the best renewable energy source for meeting long-term energy needs. It has considerably helped reduce emissions, energy imports and improve the livelihoods of agriculture. Biofuels are intensely dependent on different resources for their production, leading to a decrease in greenhouse gas emissions.