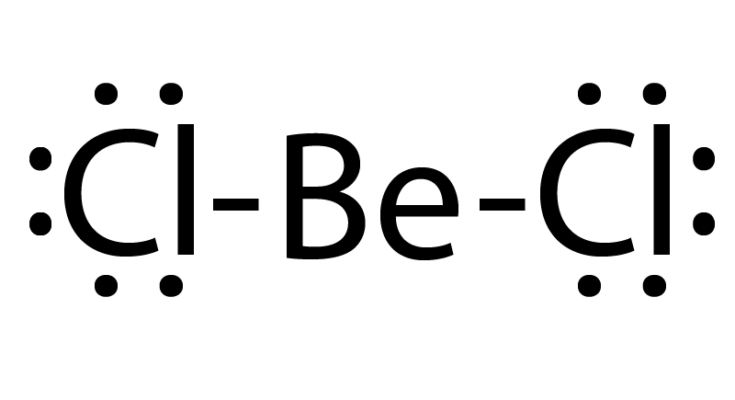 Beryllium chloride is an inorganic chemical compound having its chemical formula BeCl2. It exists as a white- green solid substance with a sharp odor. It dissolves in several polar substances. Many students may have doubts about whether beryllium chloride is polar or not. In this article, I will answer the same and will cover its properties and applications.

So, Is BeCl2 Polar or Nonpolar? BeCl2 (Beryllium chloride) is non-polar due to its symmetrical (linear-shaped) geometry. Although the Be-Cl bond is polar and has some net dipole, the overall BeCl2 molecule is non-polar in nature because the dipole of both Be-Cl bonds is equal and opposite and gets canceled by each other resulting in the zero dipole moment.

This compound is formed at high temperature by the reaction of the beryllium metal with chlorine.

Below is the reaction of the formation of beryllium chloride.

If we talk about the chemical composition of the Beryllium chloride, it consists of 1 beryllium atom and 2 chlorine atoms.

The molecular mass of the molecule BeCl2 is 79.92 g/mol

It can be calculated as

Due to this difference between the electronegativity of Be and Cl atoms, the Be-Cl bond formed is polar.

In other words, the charge distribution across the Be-Cl bond is non-uniform.

And the geometric shape of the BeCl2 molecule is linear and due to which the dipoles generated across Be-Cl bonds are equal and opposite and get canceled by each other.

As a result, the entire molecule Becl2 is a non-polar molecule.

Contents show
What are Polar and Nonpolar Molecules?
Why is BeCl2 a non-polar molecule?
Factors affecting polarity of a molecule
Properties of BeCl2
Uses of BeCl2
Conclusion

The polarity of a molecule is determined by a few parameters like electronegativity of atoms, the shape of the molecule, and its dipole moment.

A molecule is bound in itself with the help of interatomic forces. Thes forces are covalent, ionic, metallic, and hydrogen bonds.

Covalent bonds can be polar and non-polar depending upon the above parameters.

The covalent bond formed by two atoms is said to be polar if both atoms differ in their electronegativity.

This is because higher electronegative atom gains partial negative charge because it has a greater influence on the bonded electron pair.

Few examples of polar molecules are Ethanol, PCl5, etc. You can check out the reason for the polarity of Ethanol as well.

Nonpolar Molecules: these types of molecules do not have any poles generated across them. The charge distribution on the atoms of the non-polar molecule is uniform.

The covalent bond formed by the two atoms is said to be non-polar if the electronegativity of both atoms is equal.

Note: It is also possible to have polar bonds within a non-polar molecule because the polarity of bonds gets canceled by each other due to symmetric geometrical shape.

Few examples of nonpolar molecules are Hexane, CCl4, etc. You can check out the reason for the non-polarity of CCl4 as well.

Why is BeCl2 a non-polar molecule?

Beryllium chloride molecule is made up of 1 beryllium atom and 2 chlorine atoms. The Be atom is the central atom surrounded by two chlorine atom on both sides.

The electronegativity of atoms forming a covalent bond is a vital parameter to check if the bond formed is polar or not.

The Beryllium and chlorine atoms have a difference of 1.59 units between their electronegativity. Due to this difference, the Be-Cl bond becomes polar and also gives a net dipole moment.

And if we talk about the shape of the molecule, the beCl2 is linear (symmetric in shape). As a result, the equal and opposite polarity of both Be-Cl bonds gets canceled by each other leaving behind a nonpolar overall molecule.

Below is the image of the geometrical shape of the Beryllium chloride molecule.

Electronegativity: this term depicts the strength of an atom to attract the bonded electron pairs towards its side.

Two atoms differing in their electronegativity form a polar bond because of the unequal sharing of electrons across the bond.

More electronegative atom attracts the bonded electron pair slightly nearer to its side and the atom gains partial negative charge and becomes a negative pole.

And other atom gains partial positive charge and creates a positive pole.

The polarity of a molecule is directly proportional to the difference between the electronegativity of both atoms.

It is generally seen that asymmetric molecules are nonpolar in nature because the atoms share an unequal proportion of charge.

And, the symmetric molecules are nonpolar in nature because they have a uniform distribution of charge. And in a case like if these molecules have the existence of polar bonds within it, the polarity gets canceled by each other.

For the detailed structure of its bonding and electronic geometry, check out the article written on BeCl2 Lewis Structure, Geometry, Hybridization.

Dipole Moment: It is the measure of the polarity of a molecule. Greater the value of the dipole moment of a molecule more is its polarity.

It is the product of charge on atoms and the distance between them. It is denoted by D with SI unit Debye.

Beryllium chloride is a linear-shaped molecule. The molecule contains Be and Cl atoms differing in their electronegativity due to which the Be-Cl bond becomes polar.

Due to the linear shape of the molecule, the polarity of both bonds canceled by each other and result in a nonpolar BeCl2 molecule.

Guys, if you have any questions regarding the non-polarity of BeCl2 molecule, you can ask them in the comment section. We will reach out to you as soon as possible.