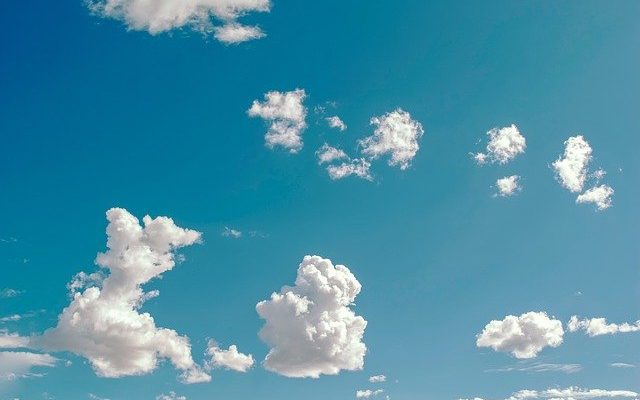 Air is one of the components of nature that is indispensable for human life. It is all around us. You must have studied or read that air, in fact, is composed of oxygen, nitrogen, carbon dioxide, and other gases. But when we look around, we cannot distinguish these gases from each other.

To us, air appears as a colorless mixture. So, let us learn more about air and mixtures.

What are Elements, Compounds, and Mixtures – Need To Know

Before going into details about the air, we need to know the concept of mixtures. What distinguishes mixtures from other types of substances?

In nature, we primarily have three types of materials. These are called elements, compounds, and mixtures.

Element is a pure substance containing only one kind of atom throughout itself.

For example, a block of iron has only iron atoms inside it. On the other hand, a compound is also a pure substance but it is composed of molecules that contain atoms of two or more elements, bound together by chemical bonds.

For example, the sugar that you eat is a compound, which has molecules made of carbon, hydrogen, and oxygen connected by chemical bonds.

Therefore, it is evident that the smallest repeating unit of an element is an atom, whereas the basic building blocks of compounds are molecules.

Now, there is one very important thing to note here. Consider water, for example. As you know, water is also a compound that has the formula H2O.

This means that one molecule of water is composed of two atoms of hydrogen and one atom of oxygen. Hydrogen gas is extremely flammable and burns rapidly.

Also, oxygen gas supports combustion and is very essential for a substance to burn. Interestingly, water, which is composed of these two gases, doesn’t have either of these two properties. Water is quite the opposite since it is used to put out fires.

What does this tell us?

This tells us that, whenever two or more elements undergo a chemical reaction to form compounds, the original properties and characteristics of those elements are lost.

The newly formed compound has its own set of properties which could even be the opposite of its constituent elements.

Finally, let us talk about mixtures. A mixture can be composed of two or more elements, two or more compounds, or a combination of elements and compounds together, which are not chemically combined.

This means that, when two substances are combined together in a sample without a chemical reaction, it results in a mixture.

For example, a few iron fillings taken in a petri dish with sulfur is a mixture.

However, the moment you provide heat to this mixture, it undergoes a reaction and forms a compound, iron sulfide.

Since the constituents of a mixture do not undergo a chemical reaction, they retain their original properties as well. For example, if we mix sugar and water, the resulting solution will be a liquid that is sweet in taste.

This sweetness is imparted by the sugar. If we try to separate the water and sugar, the sugar will still be sweet and the water would still be colorless and tasteless. 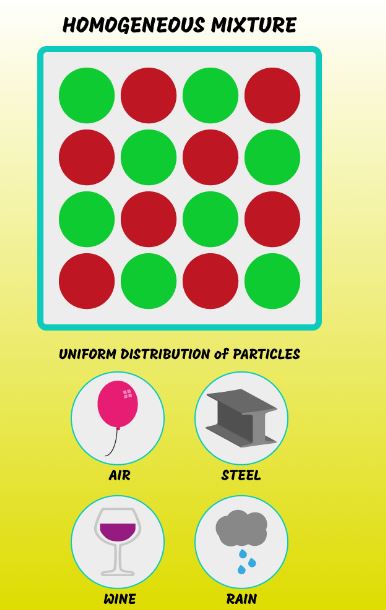 For example, if you thoroughly mix some salt in water, it is a uniform mixture, because you cannot distinguish the salt from the water inside a solution.

It appears as a clear and colorless solution. Therefore, salt mixed in water is a homogeneous mixture.

Also, homogeneous mixtures exist in the same phase of matter throughout a sample. For example, a salt and water mixture exists in a liquid phase.

Similarly, a mixture of two or more gases exists in a gaseous phase. Although the particles or the different components of a homogeneous mixture are not visibly separate, they still retain their individual chemical properties even inside the solution.

Keep in mind that, two different salt + water samples can have different amounts of salt inside. However, both of these samples will be homogeneous because, in a particular sample, the composition remains uniform.

The components of a homogeneous mixture cannot be separated from each other using methods like filtration or sedimentation.

Since the phase is uniform throughout, we need to convert one of the components into a different phase so as to separate them.

For example, a salt and water solution is separated using evaporation. Other examples of homogeneous mixtures include sugar in water, air, steel, and brass. 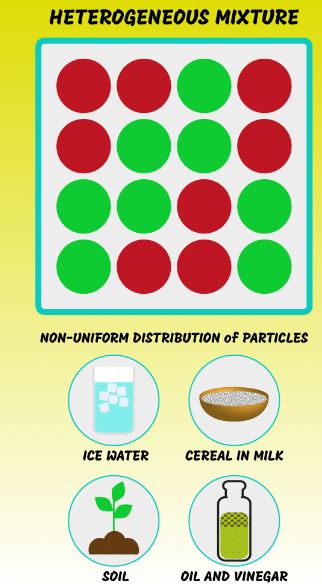 The mixtures in which the composition is not uniform throughout a sample are called heterogeneous mixtures.

The components of such mixtures are visibly separate and exist in more than one phase. For example, a mixture of oil and water forms two visible layers, each of a different phase.

Two spoons full of vegetable soup might have different compositions. Similarly, sand taken from two ends of a beach may contain a different number of stones and pebbles inside.

Heterogeneous mixtures can be separated by using mechanical methods such as hand-picking, filtration, and sorting.

Is Air Homogeneous or Heterogeneous?

Air is a homogeneous mixture. Although we know the air is composed of various kinds of gases, we cannot see them or distinguish them from each other.

Also, air taken from any two parts of the world will always have the same composition of gases, which is the property of a homogeneous mixture. Air always exists in a single, gaseous phase everywhere in the world.

The components of air cannot be separated by simple mechanical methods.

All these characteristics make the air a homogeneous mixture.

How Can We Separate the Components of Air?

So, gaseous air is first liquefied to form liquid air. This is done by compressing it under high pressure. After the liquid air is cooled, the mixture is passed through a fractionating column.

The lower end of the air column is warmer than the upper end. So, whenever one of the components of air reaches its boiling point, it will separate out as a gas and can be collected through an outlet.

Thus, one by one all gases can be separated and the last remaining liquified gas with the highest boiling point can be collected from the bottom of the column.

In this article, we saw why air is known as a homogeneous mixture. Air is a uniform and colorless mixture which is composed of several gases. We also looked at how matter is classified into elements, compounds, and mixtures.

We learned about the properties of homogeneous and heterogeneous mixtures and also about the technique of fractional distillation.

I hope this article was informative for you.