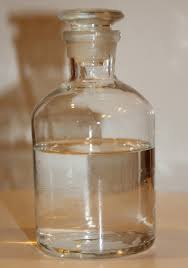 Acetone is an organic compound with its chemical formula (CH3)2CO. It is classified as the simplest ketone. It exists as a colorless volatile liquid. It has a characteristic odor and flammable in nature. Many students may have a question regarding whether acetone is polar or not. In this article, we will discuss this detail and will also cover its properties and application.

So, Is Acetone Polar or Nonpolar? Acetone is a polar substance because of polarity in the carbonyl group due to the difference in the electronegativity of oxygen and carbon atom. As a result, the dipole moment of Acetone is around 2.69 D.

Acetone exists in a liquid state at room temperature. It is colorless in appearance and has a characteristic odor. It is volatile and flammable in nature.

Acetone was first produced in the year 1606 by Andreas Libavius with the process of distillation of Lead(II) acetate.

But now, the method is changed. It is synthesized by propylene. Majorly, acetone is produced by the cumene process.

In the cumene process, benzene is alkylated with propylene to form cumene that is further oxidized by air to produce acetone and phenol.

It is easily miscible in water and used as an important solvent. Its preferred IUPAC name is Propan-2-one.

This chemical is also produced inside the human body through various metabolic processes and disposed of through urine.

Diabetic patients secrete a larger amount of acetone in their bodies.

This substance is a solvent that can dissolve other compounds. It is one of the most important solvents that is used to remove nail polish from the nails.

This organic compound falls under the umbrella of the ketone family.

If we talk about the chemical structure of acetone. It consists of one carbonyl group (C=O) attached covalently with two methyl groups(-CH3).

The oxygen atom, being more electronegative attracts the bonded electron pair with more influence and gains a slightly positive charge.

Whereas the carbon atom gains a partial positive charge.

And the two methyl groups attached on both sides of the carbonyl group are non-polar. But due to polarity of C=O (carbonyl group), the entire molecule becomes polar.

Due to the polar carbonyl group, the dipole moment of acetone turns ou to be non zero (2.69 D).

Below is the image of the detailed structure of acetone depicting the band angles and bond lengths in the acetone molecule. 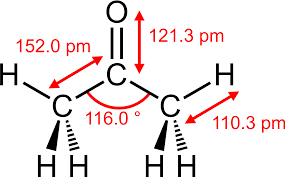 The Molecules are held by various types of interatomic forces like covalent, ionic, hydrogen bond, and metallic bonds.

Polar Molecules: These are the molecules in which its atoms share an unequal proportion of charge. The dipole moment of such values is non zero.

The atoms that are covalently bonded to each other form a polar bond if both atoms differ in their electronegativity.

More electronegative atom attracts the bonded electron pair slightly more towards it and gains partial negative charge on it.

On the other hand, lesser electronegative atom gets a partial positive charge.

Basically, the unequal distribution of charge among the atoms of a molecule makes it polar in nature.

Few examples of such molecules are HBr, OF2, H2O. You can check out the reason for the polarity of HBr.

Nonpolar Molecules: These molecules have zero dipole moment. The atoms in this molecule share an equal proportion of charge.

The covalent bond formed by atoms is said to be nonpolar if both atoms have equal electronegativity.

The distribution of the charge in these molecules is uniform.

Few examples of such molecules are Hexane, PCl5, etc. You can check out the reason for the non-polarity of PCl5.

Why is Acetone a Polar Molecule?

Acetone is an organic compound made up of 3 carbon atoms, 6 hydrogen atoms, and 1 oxygen atom.
The molecule consists of one carbonyl group surrounded by two methyl groups on both sides.

If we calculate the difference between the electronegativity across the carbonyl group. It turns out to be 3.44 – 2.55 = 0.89 D.

This difference shows the non-uniform charge distribution across the carbonyl group (C=O).

If there is a difference between the electronegativity of two atoms forming a covalent bond. Higher electronegative atom attracts the bonded electron slightly towards its side and gains a partial negative charge.

Therefore, the polarity of a molecule is directly proportional to the difference between the electronegativity of atoms forming that molecule.

Mathematically, it is the product of the charge on atoms and the distance between them.

Geometrically symmetrical shaped molecules tend to be polar in nature.

Below is the image of the geometrical structure of acetone. 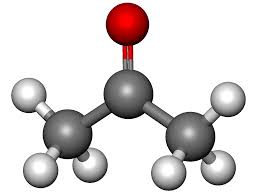 The methyl groups are nonpolar but the carbonyl group is polar in nature because of the difference between the electronegativity of oxygen and carbon atoms.

As a result, the dipole moment of the entire molecule of acetone turns out to 2.69 D.

Due to these reasons, the acetone is a polar molecule.

Guys, if you have any questions regarding the polarity of acetone. You can ask them in the comment sections. We will reach out to you as soon as possible.