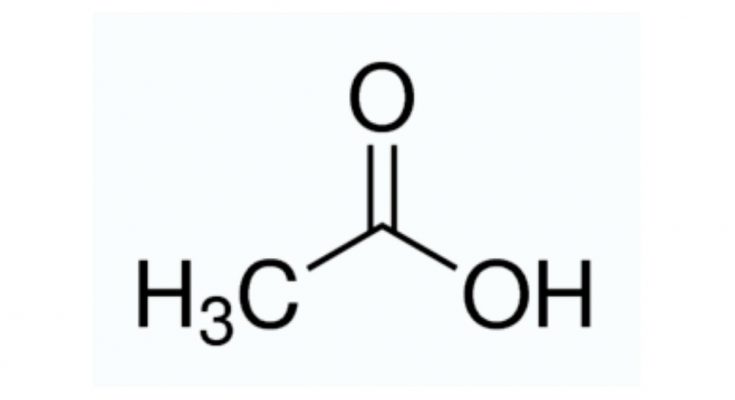 Acetic acid is a synthetic carboxylic acid. It is a colorless acidic organic liquid with a vinegar-like smell. In industries, acetic acid is formed by rhodium-iodine catalyzed carbonylation of methyl alcohol.

In pure form, it is known as glacial acetic acid and is known to be corrosive in nature.

Many of us are confused if acetic acid is a weak or a strong acid.  Today, in this article, I will make you familiar with the concepts regarding weak acids.

So, let us start with the basics of Acetic acid.

Few properties of acetic acid are listed in the table below:

It is a chemical reagent industrially used for the production of cellulose acetate used in making photographic films and textiles, metal acetates used in printing processes, and polyvinyl acetate used in the formation of plastics, volatile organic esters, etc.

In the household, it forms the main component of vinegar (about 4%-7% along with water).

Acids are substances that give away one or more protons (H+) when dissolved in an aqueous solution. Based on their capacity to donate proton acids are further divided into monoprotic, diprotic, and polyprotic acids.

Usually, acids can be recognized by the following characteristics:

• Neutralize alkalis with the formation of salt.

• Are sour in taste.

A few examples of acid are HCl, H2SO4, CH3COOH, HCN, etc. The strength of an acid can be determined by the ease with which it loses a proton.

Based on strength acids can further be divided into strong and weak acids.

Strong acids are those that almost completely ionize in an aqueous solution. They have a strong tendency to lose a proton and resultantly form a weak conjugate base.

In an aqueous solution, the free proton combines with the water molecules to form hydronium ions.

The reaction can be written as:

The point to be noted here is that even when H2SO4 is a diprotic acid its Ka and pKa values are calculated only for the first dissociation i.e. one proton.

The weak acids are those that do not completely ionize in a solution and result in the formation of a strong conjugate base which quickly takes up the proton back from the solution.

Their reaction in aqueous solution is given as:

The double arrow here indicates a reversible reaction which means that the strong conjugate base formed keeps reforming the actual acid molecule over and again.

This can also be seen in the case of CH3COOH where acetate ion is formed after dissociation which is not stable in ionic form and forms a strong conjugate base.

The double arrow indicates that both forward and backward reactions are possible. Other examples of weak acids are Formic acid (HCOOH), Hydrocyanic acid (HCN), etc.

Why is CH3COOH a Weak Acid?

To understand this we shall have a look at the dissociation equation for acetic acid:

The CH3COO- ion formed is a strong conjugate base that is eager to take up the proton back from the solution which is also clear from the double arrow used in the equation, an indicator of a reversible reaction.

Moreover, as CH3COO- ion exhibit resonance the negative charge of the electronegative oxygen atom is delocalized on another oxygen atom present in the same molecule which further makes it a strong conjugate base resulting from a weak acid i.e. acetic acid.

Let us have a detailed discussion about it.

The strength of an acid is determined by its tendency to lose a proton or ionization capacity.

It refers to the presence of two opposite poles or charges inside a molecule. The intensity of these charges determines the ease with which the molecule gives away its proton.

The polarity of a molecule is dependent on the distribution of electrons in a chemical bond.

The oxygen atom present in the acetic acid molecule pulls the electron towards itself making it a polar molecule. The relative polarity of acetic acid is 0.648.

It refers to the tendency of an atom to attract the shared pair of electrons towards itself in a chemical bond.

The greater electronegativity difference indicates towards higher polarity of a molecule resulting in the separation of charges on the chemical bond.

In the case of CH3COOH, even when the hydrogen atom is connected with an oxygen atom which is quite electronegative in itself, the charge is delocalized due to which the acetate ion is strongly bonded to its proton making it a weak acid.

The acidity of a molecule is also affected due to its electric charge as a proton can be easily removed from a positively charged species due to repulsion between similar charges while a negatively charged molecule makes it difficult for the proton to leave.

It refers to the existence of one molecule in different forms. The molecular formula remains the same with the rearrangement of sigma and pi bonds inside a molecule.

This effect is important as it is responsible for the reactivity of a molecule towards an electrophilic or nucleophilic reaction.

In the case of acetic acid, the acetate ion exhibits resonance due to which the negative charge initially located on one oxygen atom tends to get delocalized which results in the reduction of molecular reactivity of this ion which tends to take its proton back from the solution.

The difference between the atomic sizes of the associated atoms affects the acidity of a molecule as it determines the strength of the chemical bond.

The potential of the bond decreases as the size of the other atom increases making it easier for hydrogen ions to dissociate from the species, resulting in strong acid.

The meaning of acidity and basicity changes with the solution. Acetic acid is soluble in polar solvents like water where it forms hydrogen bonds as well as in liquid ammonia which is unable to form a hydrogen bond.

However, the strength of an acid is usually measured in an aqueous solution.

The equilibrium is reached with the conjugate base of acid after the dissociation of acid in an aqueous solution (to whichever extent possible) is over.

In the case of strong acids, the equilibrium is more inclined towards the product. 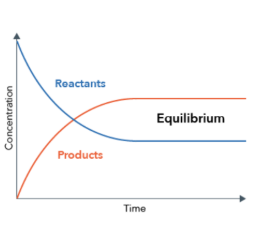 However, in the case of acetic acid, as seen earlier, the reaction is reversible (denoted by the double arrow) indicating that at equilibrium the dissociation and reformation of acid molecules continue at the same pace.

The extent of ionization of acid is calculated through the acid dissociation/ionization constant.

The strength of the acid can be determined by its Ka value.

The weak acids have a lower value of Ka and vice versa. It is the equilibrium constant and a quantitative measure of the strength of an acid in a solution.

It is written as a quotient of the equilibrium concentrations (in mol/L).

Ka is often expressed in terms of logarithmic constant (pKa), the value of which is equal to -log10(Ka).

The larger value of pKa represents lesser dissociation and in turn weaker acid. The strong acids usually have their pKa value below -2 while weak acids have pKa values between -2 to 12.

It is the measure of the extent of dissociation of an acid in a solution.

Calculating values of Ka and pKa for acids

The strong acids easily donate their hydrogen ion while weak acids do not completely ionize in a solution.

The numerical value of Ka and pKa are the measure of the readiness of an acid to give away its proton.

For monoprotic acid, it is calculated as:

The value of Ka can also be derived from pH, which is the measure of the concentration of free hydrogen ions in a solution. It is represented as

If the molar concentration acid solution is known, pH can be measured then the Ka value for the solution can be calculated using the above equation.

• Acetic acid (CH3COOH) is a strong acid as it does not completely dissociate in an aqueous solution.

• Weak acids do not dissociate completely in an aqueous solution while strong acid ionizes almost completely.

• The strength of an acid can be determined by different factors. They are polarity, electronegativity, electric charge, resonance, atomic size, type of solvent, and equilibrium.

• For a compound, the acidic strength can be calculated in the term of Ka and pKa by below formulae: