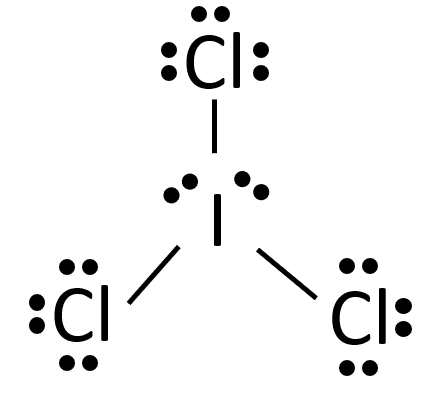 These compounds are generally written as ABn where n= 1, 3, 5, and 7; A and B are less electronegative and more electronegative elements, respectively. They are more reactive than individual halogen atoms from which they are formed.

ICl3 is bright yellow solid, which turns into red color upon exposure to light due to the formation of elemental iodine. It is so reactive that it exists as a dimer, I2Cl6 in solid-state. Its melting point is 63°C. The molecular weight of iodine trichloride is 233.26 g/mol.

Let us start to study the chemical bonding in iodine trichloride to understand its chemistry.

We will approach chemical bonding by studying Lewis theory for knowing its Lewis structure and then we will discuss the hybridization of iodine atom in iodine trichloride molecule.

In the last, we will study its polarity, i.e., iodine trichloride is polar or nonpolar.

The 2D structure of any compound is best represented by drawing its Lewis structure. It includes only electrons (bonding as well as nonbonding) that are present in the valence (outermost) shell of an atom.

According to the lewis theory, every atom prefers to have eight electrons around itself in the valence shell except Helium and Hydrogen.

The drawing of the Lewis structure of any compound consists of the following steps:

In the skeletal structure of ICl3, Iodine will be the central atom and all three chlorine atoms will surround it.

Hence, the Lewis structure of iodine trichloride would be: 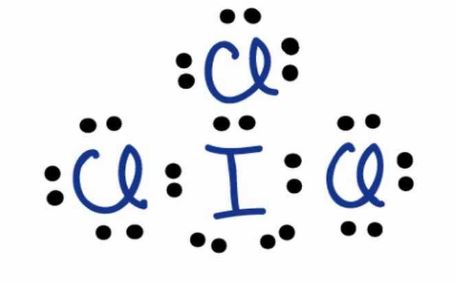 Therefore, these elements can be surrounded by more than eight electrons.

The one shared electron pair represents the single bond. So, the Lewis structure of the iodine trichloride can also be represented as: 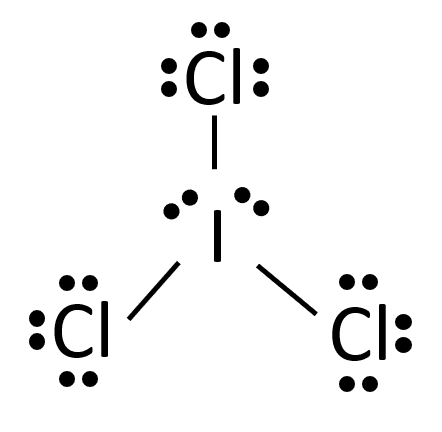 We cannot predict the shape and molecular geometry of iodine trichloride from the Lewis structure. It is well understood by the valence shell electron pair repulsion (VSEPR) theory.

Let us study the VSEPR theory to predict the shape of iodine trichloride.

As per VSEPR theory, the number of bonded (bond pair) and non-bonded (lone pair) valence shell electrons determine the shape and molecular geometry of the molecule.

It can be observed from the Lewis structure that Iodine, the central atom, has three bond pairs and two lone pairs of electrons.

As per the table, ICl3 resembles AX3E3 due to the presence of three bond pairs and two lone pairs of electrons on the central atom, Iodine.

It leads to trigonal bipyramidal geometry of iodine trichloride and T-shaped shape, which can be represented as: 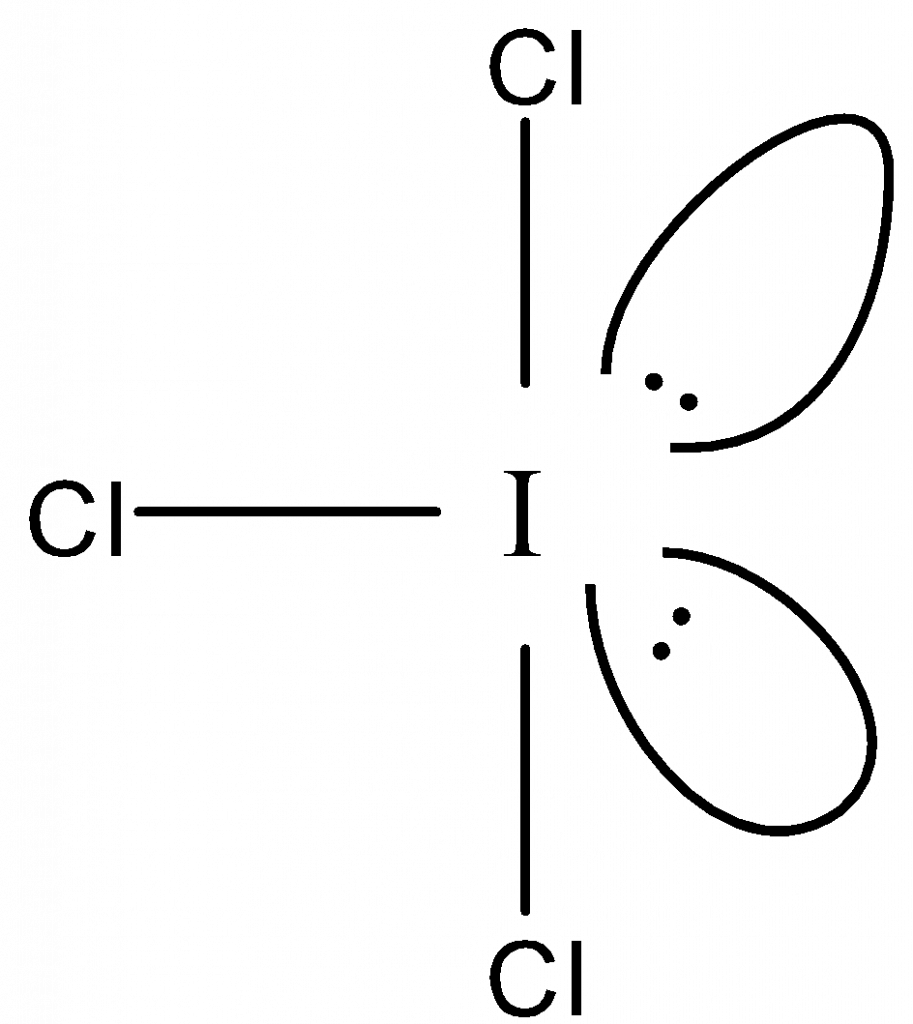 One question will come into your mind i.e., why both lone pairs of the electrons are at an equatorial position not at an axial position.

Overall, there will be five lone pair-bond pair repulsions at 90 °, if one lone pair of electrons occupies the axial position. This arrangement is also less stable than the T-shaped arrangement.

The T shape and trigonal bipyramidal geometry of iodine trichloride lead to a bond angle (Cl-I-Cl) slightly smaller than 90 ° and greater than 180 ° due to prominent lone pair-lone pair repulsions than bond pair-bond pair repulsions. 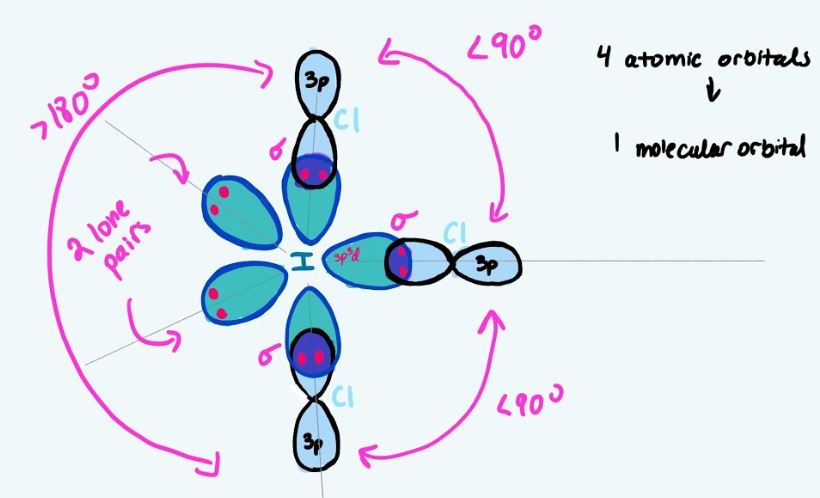 Now, let us discuss the hybridization of iodine in the ICl3 molecule for a better understanding of the chemical bonding in it.

The valence bond theory (VBT) is used to determine the hybridization of iodine in the ICl3 molecule. The process of combining and fusing atomic orbitals of similar energy to form hybrid orbitals is known as hybridization.

The hybridization of the central atom can be sp, sp2, sp3, sp3d, dsp2, and sp3d2 depending upon the number and presence of similar energy atomic orbitals.

Hence, one of the electrons from the 5p orbital will promote to 5d orbital for the formation of three bond pairs with three chlorine atoms. It leads to the excited-state electronic configuration of iodine as [Kr] 4d105s25p45d1. 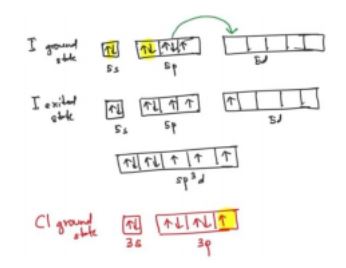 Now, one 5s orbital, three 5p orbitals, and one 5d orbital combine and fuse together to form five sp3d orbital of the same energy.

Three of them will overlap with the 3p orbital of the chlorine atom and form three sigma bonds. Two sp3d orbitals have paired electrons, which act as lone pairs.

Therefore, the hybridization of iodine in iodine trichloride is sp3d with trigonal bipyramidal geometry.

The orbital diagram of Iodine trichloride is given below: 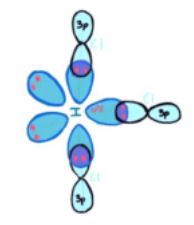 The Lewis structure is shown in detail in the following video. Have a look!

For a chemical bond to be a polar covalent bond, the electronegativity difference between two atoms should be between 0.4-1.7.

The electron density will be shifted towards the chlorine atom as it is a more electronegative element.

The shifting of electron density towards chlorine atom creates a dipole and hence, permanent dipole moment from iodine to chlorine.

The dipole moment of two opposite Cl-I bonds will not cancel out because the Cl-I-Cl bond angle is not exactly 180° but greater than 180 ° owing to lone pair- lone pair repulsions.

Therefore iodine trichloride is a polar molecule and is easily soluble in water.

ICl3, an Interhalogen compound, is more reactive than chlorine and iodine molecule owing to the electronegativity difference between two atoms.

Chlorine follows the octet rule but iodine shows an expanded octet due to the presence of d electrons in the Lewis structure of ICl3.

The hybridization of the iodine atom in ICl3 is sp3d with trigonal bipyramidal geometry.

The trigonal bipyramidal geometry and electronegativity difference between chlorine and an iodine atom gave insight regarding the polar nature of ICl3.

Hope you enjoy reading this article and related doubts are most welcome. Thank you.