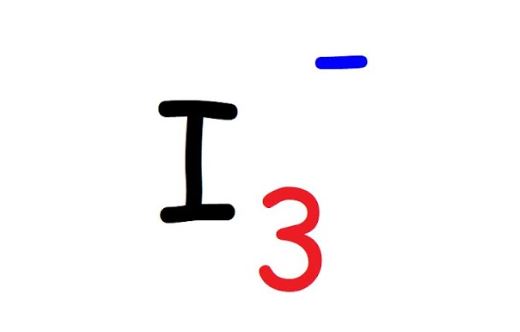 I3- or triiodide ion is a polyatomic molecule or a charged molecule having a net negative charge of -1.

This is the exergonic equilibrium leading to the formation of the ion where a positive flow of energy happens from the system to the surroundings.

One of the major uses of this ion is due to its non-reactive property with starch which results in an identifiable blue-black color used a lot for identification.

It is a major component of a lot of salts.

Now, let us learn the internal chemistry and make ourselves aware of its bonding nature in order to gain more insight into its properties.

Lewis Structure of I3

Anyone wanting to know in-depth about a molecule needs to learn about the Lewis Structure. Why is it so necessary to have an idea on this topic?

Well, Lewis Structure is the name given to the diagrammatic representation of chemical bonding occurring between atoms inside a molecule.

Also known as Lewis electron dot structures, it is based upon the octet rule of valence electrons.

It is a key concept to understand the characteristics and hybridization of a molecule since it helps us draw the chemical structure.

To find out the Lewis structure of I3, let us check all the steps in the following process.

At the very beginning, we need to calculate the total valence electron number.

While doing so, we have to deal with two signs: the positive or the ‘+’ sign and the negative or the ‘-’ sign.

The first one stands for electron loss while the latter signifies the taking in or gain of negatively charged electrons thus increasing the negative charge of the molecule.

After we have measured the total number of valence electrons, we have to find out which one is the central atom.

In order to do so, we need to check the atom having the highest valence i.e. the least electronegative one. This central atom is going to have a larger number of bonding sites with respect to the other elements.

The third step is based on sketching the skeleton diagram of the given molecule. This is done to visualize the single bonds in the positions that they are present.

Most of you are already familiar with the term ‘octet rule’. It is basically a thumb rule that states that each atom of a molecule needs to have eight valence electrons (electron count in the outermost shell).

So, our duty here is to perform the octet completion. For your own ease, try to start with the electropositive ones first.

After we have completed octets of atoms around other atoms, we must verify whether more bonds are needed to be formed.

Double bonds or if necessary triple bonds are hence formed.

We are now done with all kinds of bond formation, The last step is focused on the formal charge concept.

If we can confirm that all the atoms inside a given molecule are maintaining their formal charges at their lowest value, our Lewis structure is complete.

Calculation of formal charge is done by simply following this easy formula.

For I3 (Triiodide ion)

1. I3 consists of 3 iodine present in its molecule. The atomic number is 53 and it consists of 7 electrons in the outermost shell.

We also have an additional electron to provide the overall negative charge to the I3 molecule.

2. Since all the atoms are iodine, one of these plays the role of the central atom.

3. As you can see in the above diagram, the skeletal structure of I3 with the negative charge has been drawn.

4. This step is concerned with the octet rule fulfillment.

According to the octet rule, the highest multiple of 8 under the total no. of valence electrons (step1) needs to be considered. Here, the value is 16. Now, 22-16=6.

Hence, the iodine atom at the center in between the other two atoms is going to have 3 lone pairs(6) electrons with itself.

Forming the single bonds with the other two iodine, we find out that there are 3 lone pairs and 2 bond pairs for the central iodine.

5. Checking the formal charge, we put the negative charge outside as per the diagram above.
Thus, lewis structure is done.

The hybridization of I3 (Triiodide ion) is sp3d.

The way we draw the structure of molecular compounds on paper is just a two-dimensional form.

The understanding of chemical reactions and physical properties can be better understood with the visualization in a 3-dimensional platform.

And, this visualization of the orientation of atoms inside any simple or complex compound is based on the hybridization concept.

A simple formula to check out the hybridization number is:

Where, C= charge of cations; A=charge of anions, V= the total number of valence electrons, M= Monovalent atoms and H stands for the ultimate hybridization value.

As per knowledge, since sp hybridization value is 2, similarly we can find out that for H=5, the type is sp3d.

Molecular Geometry of I3

If we take another look at the Lewis Structure of the ion I3-, we can easily see that the central iodine has three lone pairs.

The lone pairs are positioned equatorially due to repulsion.

Hence, the other two iodine atoms are placed axially and the bond angle made is 1800.

If we have focused on the formal charge theory, we know that it is the central atom that has the negative charge, thus the donor.

The shape of the I3- ion, therefore, is linear and symmetrical. 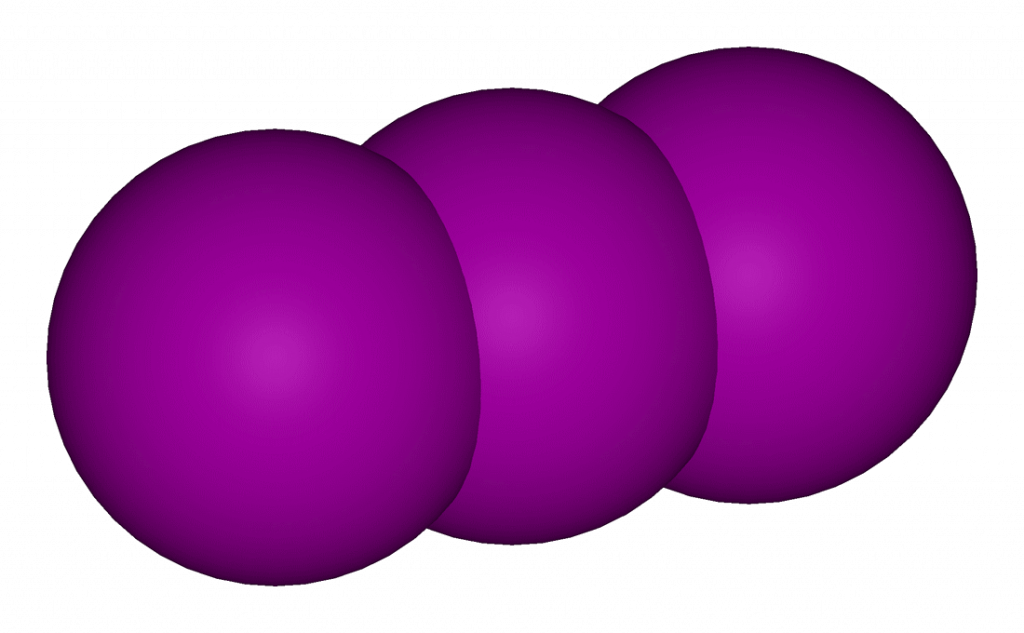 I3- is an interesting and difficult molecule to deal with when it comes to chemical bonding.

Although the molecular geometry is linear as discussed earlier, the electronic geometry is trigonal bipyramidal.
The structure of triiodide ions is such that the middle atom carries the ‘-’ charge.

Now, as we discuss polarity, let us define it.

In chemistry, polarity means something that will bear a non-zero value of dipole moment.

Dipole moment, thus, is a measure of polarity and is a result of electronegativity difference inside a molecule.

It usually occurred due to the separation of positive and negative charges and depends on the distance between them.

Here, if we check I3- has a negative charge but also it is symmetrical in molecular geometry with no resultant dipole moment. Instead, the total charge of the molecule is negative as deciphered earlier.

So, whether to call this triiodide ion a polar or nonpolar molecule is a topic of debate but if we look at the solubility factor, we can infer that it is polar( I3- is soluble in water).

Triiodide ion is a shining example of 3-center-4-electron chemical bonding.

Now, what does it signify?

Before that, a brief summary of MO or Molecular Orbital theory is placed before you.

Now, as most of us are aware, a molecular orbital is a function to understand the location and wave-like nature, thus, a delocalized approach to bonding.

A MO can have a maximum of 2 electrons. MO results from overlapping between AO(atomic orbitals) of the same energy.

5s and 5px, 5py are low in energy and weak, therefore non-bonding. 5pz is left but it has both bonding and a non-bonding lone pair, the latter one positioned on the side iodine atoms giving them each a -0.5 formal charge.

Together, the 10 non-bonding pairs and one single bond gives 22 valence electrons as calculated earlier.

Triiodide ion is definitely one of the most useful topics of chemical bonding due to its tricky nature and important features.

Here, we had a sneak peek into the hybridization, Lewis Structure, Polarity, Shape, and Orbital concept.

This sure will help you understand the physical and chemical properties of compounds having I3- in a better fashion.