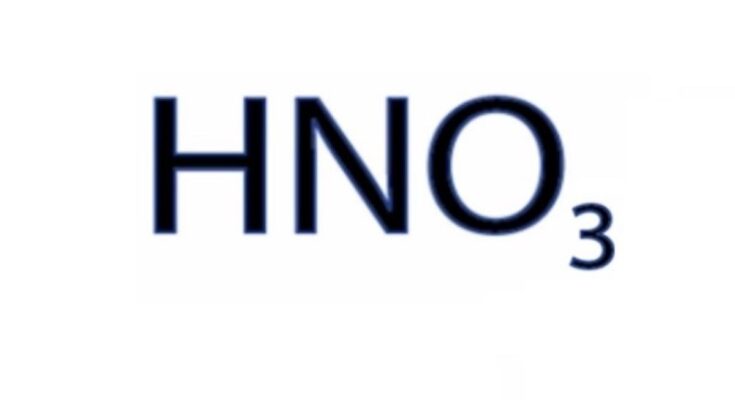 Nitric acid (HNO3), a highly corrosive acid, is a very important chemical. It is usually a colorless liquid, but the older samples turn pale yellow because it gets decomposed into water and oxides of nitrogen.

This toxic liquid has yellow or red-brown fumes that can cause serious damage to your eyes and nose. The concentrated acid causes severe burns to your skins as well.

This chemical can be prepared by oxidizing ammonia.

Nitric acid is also known as the spirit of niter, and aqua fortis. The chemical has a wide range of uses; it is used in paint industries, fertilizers, explosives, and many other materials.

It is used to manufacture ammonium nitrate fertilizer. HNO3 is an interesting chemical to study.

In the next sections, we will discuss the Lewis structure, molecular geometry, and hybridization of this acid.

Nitric acid has the molecular formula of HNO3, which means it has one hydrogen atom forming bonds with nitrate ion.

Let’s understand the molecular structure of the compound, and for that, we need to look at the electronic configurations of the atoms and how many electrons they have in the outermost shell.

If you observe the electronic configuration of the elements, you can see hydrogen has only one electron, nitrogen has 5 electrons, and oxygen has six electrons in the outermost shell.

It will help us understand how these elements share electrons to form bonds.

Now let us look at the steps to understand the Lewis structure of HNO3.

Step One: Finding how many electrons in the outer shell are there in the atoms.

Step Two: Find how many electrons are needed for Octet.

We can find it by subtracting the number of electrons in an outermost shell from the electrons needed for an octet.

Step Four: In this step, we have to find the number of bonds in the molecule.

Step Five: We have to find the number of lone pairs (electrons not forming a bond).

We can get it by deducting the electrons participating in bond formation from the valence electrons. Here it is 24-10 = 14, that is 7 lone pairs.

Now, to draw the Lewis structure of HNO3, first of all, we should find the central atom; it is nitrogen in this compound, which has the lowest electronegativity.

The next step is to arrange the other atoms, and the last step is to draw the bond pairs and lone pairs.

In HNO3, every atom obeys the octet’s rule, so in lewis structure, we place the central N atom first. Then we place two O atoms and one OH ion on three sides.

One oxygen atom and the OH ion are connected with single bonds respectively while the remaining oxygen atom is connected to nitrogen via a double bond to follow Octet’s rule.

Here only oxygen has lone pairs around it. The oxygen atom forming a double bond forms two lone pairs, while the other oxygen forms one bond pair and three lone pairs. 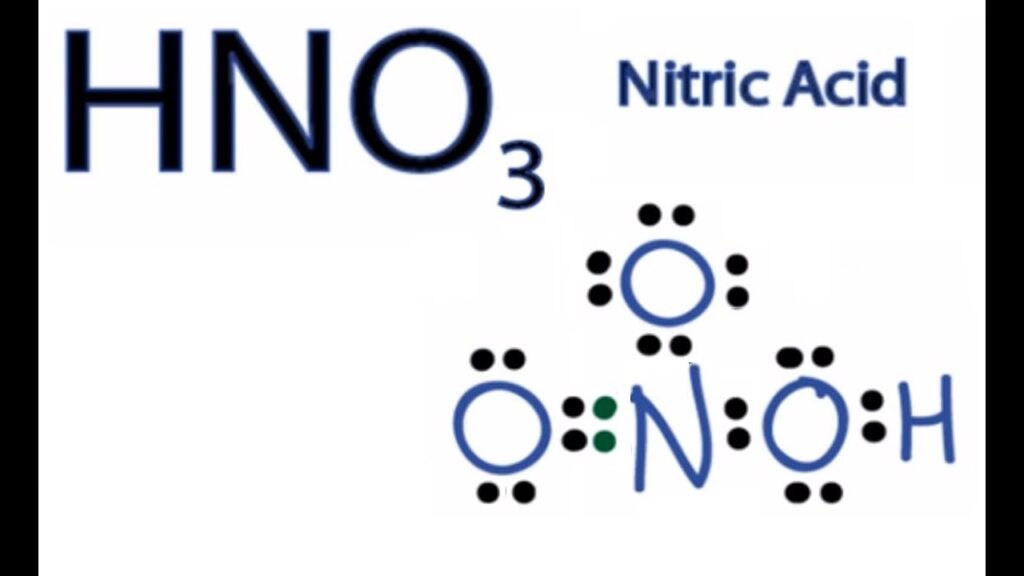 If we look at the shape of the HNO3 molecule, it has a trigonal planar shape.

The molecular geometry of any molecule is determined by two things ie; the Lewis structure and the VSEPR (valence shell electron pair repulsion) theory.

If we look at the Lewis molecular structure of HNO3, we can see H has one, N has five, while O atom has six valence electrons.

During the bonding process, the nitrogen atom connects with one oxygen atom through a single bond. It forms two single bonds with another oxygen atom and the OH ion.

The O atoms form lone pairs; the first oxygen atom has two, while the second one has three. The oxygen atom in the OH ion has two lone pairs.

The VSEPR theory states, the pair of electrons or the bonds tend to stay at the maximum distance as they repulse each other. It gives the molecules a stable shape.

Apart from this, the covalent bonds and lone pairs determine the structure of a molecule.

The electron pairs participating in a bond repulses each other; the repulsive force is the highest between two lone pairs. It is less in the case of lone pair and bond pair, and the least between bond pairs.

To understand the molecular geometry of HNO3, we have to look at the VSEPR theory. The central atom is nitrogen.

As the electron pairs repulse each other with maximum force, so the atoms around them stay at the maximum distance possible so that the force of repulsion is minimum.

Another thing that helps us find the molecular structure is the steric number (SN). We can find the number by adding the lone pairs with atoms that are involved in bonds.

In HNO3, nitrogen forms bonds with three oxygen atoms, and there is no lone pair on nitrogen. So, the SN of the nitrogen atom in HNO3 is three.

On the other hand, the oxygen atom bonded to hydrogen has an SN of 4 because of two bond pairs as well as two lone pairs.

If we refer to the VSEPR geometry table, we can find the compounds with the central atom has (Stearic Number) SN 3, and the lone pair has a shape of trigonal planar.

The HNO3 molecule exhibit polarity due to the lone pair and asymmetrical shape of the molecule. 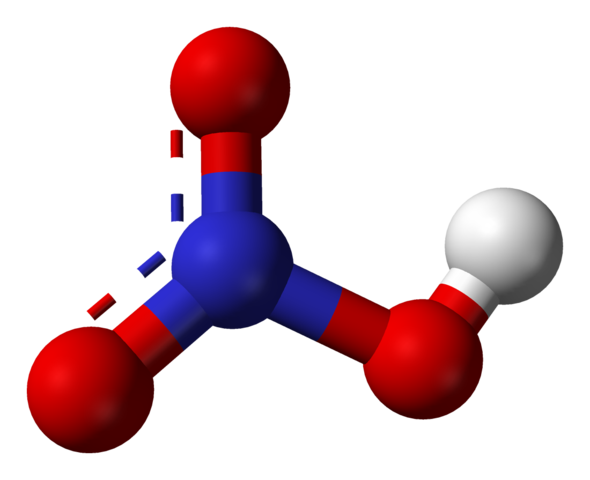 Hybridization of the HNO3 Molecule

The process of combining two orbitals with the same energy level to form a new type of orbitals is called hybridization.

It is important to learn how atoms are arranged in a molecule to understand the shape of a molecule.

If we can visualize the structure of a chemical substance, we can learn about the physical, chemical properties, and shape of the substance. 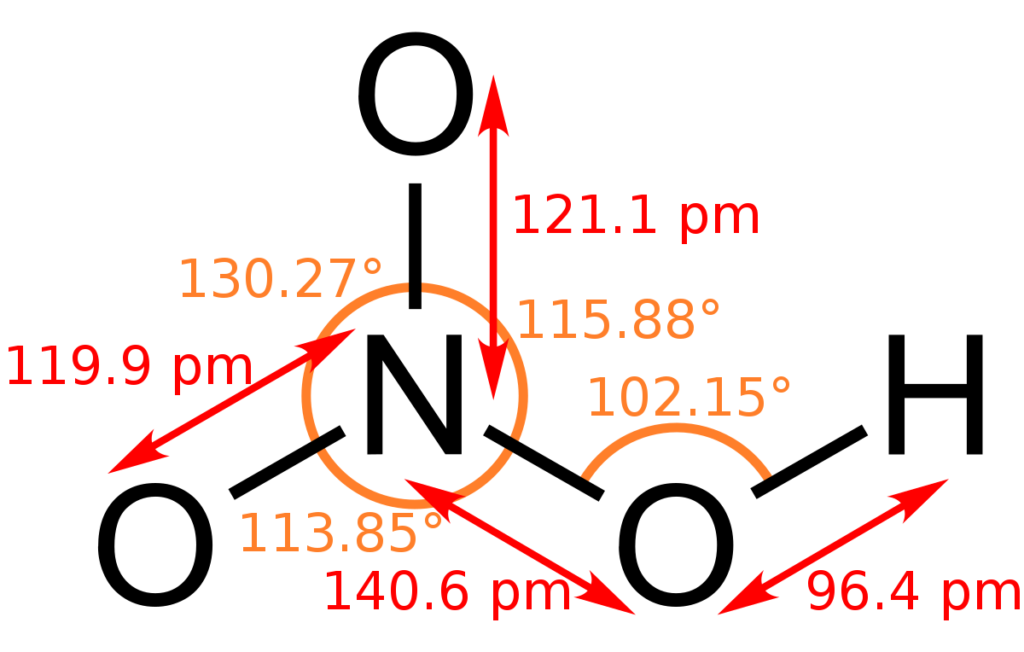 The sigma bonds between N and O atoms are formed by 2sp2 orbital of nitrogen and a hybrid orbital atom from O atoms.

As a result, three sigma bonding and antibonding orbitals are formed.

The single sigma bond between hydrogen and oxygen use 1s orbital of hydrogen 2sp3 orbitals of oxygen. It results in a sigma bonding and antibonding orbital.

Nitrogen and two oxygen atoms create three pi orbitals. The 2sp2 orbitals left on oxygen do not participate in bonding.

HNO3 has great significance in chemistry; it’s Lewis structure, molecular geometry, and hybridization help us know a lot of things about this important chemical.

In this article, we have focused on learning the structure of this compound. Knowing these facts will help us understand the shape, and properties of this compound in a better way. We hope you found it informative.