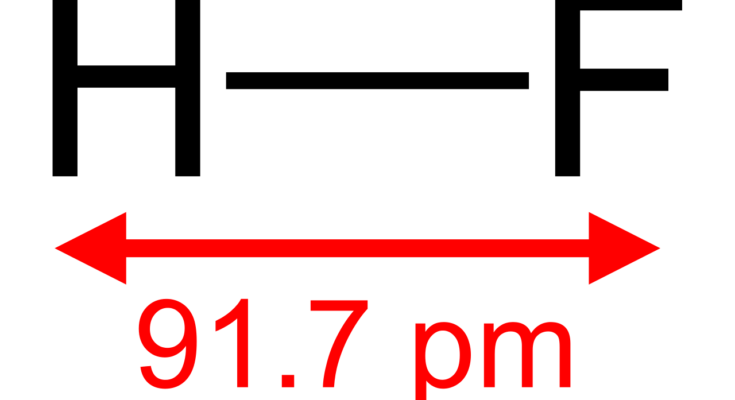 HF, or Hydrogen Fluoride, is a colorless and odorless chemical compound. Produced by the reaction of hydrogen with very reactive element fluorine, HF can exist as a colorless gas, fuming liquid, or as an aqueous solution, called Hydrofluoric acid. HF can be used to make refrigerants, herbicides, pharmaceuticals, fluorescent bulbs, etc.

So, Is HF Polar or nonpolar? Yes, HF is a polar molecule because of the unequal electronegativity of both atoms resulting in non-uniform distribution of charge across them, and the molecule results in a net dipole moment 1.91 D.

Contents show
What are Polar and Non-Polar Molecules?
Determining the Bond Polarity
Formation of HF (Hydrogen Fluoride)
Polarity of HF
The mathematical calculation for electronegativity
The Lewis Dot Structure
Polar vs Ionic Bond
The dipole moment of HF
Properties of HF
Applications of HF
Conclusion

What are Polar and Non-Polar Molecules?

There are a variety of bonds between the two main extremes- polar and non-polar. Polar molecules are the ones whose center of positive and negative charges do not coincide with each other.

Certain mathematical and diagrammatical analysis can help determine the polarity of a bond on theoretical levels.

Consider the difference between the electronegativity value of the two atoms in the bond.

For a molecule to be polar, polar bonds must exist. After confirming the existence of polar bonds, the Lewis structure of the molecule can be used to determine its symmetry and overall polarity.

You can check the reason for the non-polarity of CO2.

Under standard conditions, hydrogen and fluorine exist in a diatomic gaseous state, H2, and F2 respectively.By forming an equation, we can see the formation of HF in its anhydrous gaseous form.

At industrial levels, HF is produced in a liquid acidic form by virtue of the following chemical equation:

HF is made up of two elements- hydrogen and fluoride. Hydrogen is the first chemical element in the periodic table with only one valence electron (valence shell config.: 1s1).

The mathematical calculation for electronegativity

To determine the polarity of HF, we need to consider the electronegativity of hydrogen and fluorine.

Electronegativity for atoms that tend to attract electrons towards themselves more strongly is higher. In this case, the electronegativity of fluorine is 3.98 and that of hydrogen is 2.20.

This huge difference in the HF bond leads to a fervent polarisation of the bond, which is also evident in the electrostatic potential map.

Now to determine the overall polarity of the molecule, we need to consider the Lewis structure of the HF molecule.

The Lewis structure will help us know the location of electrons around the atoms in the molecule and how the atoms are organized.

From the structure, it is clear that fluorine, being one of the most electronegative elements in the periodic table will try to pull the shared pair of electrons towards itself and not allow equal sharing between H and F.

Due to this, a negative charge develops on the fluorine atom and the hydrogen is left with a positive charge.

This happens so because of the unequal sharing of electrons, due to which hydrogen is a deficit of electrons and develops a corresponding positive charge.

These positive and negative charges lead to the formation of a net dipole on the HF molecule.

below is the geometrical shape of the lewis structure of HF

However, a question may arise that the bonds with the formation of charges are considered ionic in nature. Then what is the difference here and why this bond is called polar and not ionic?

The answer to this question is simply that for bonds to be categorized as ionic:

The dipole moment of HF

Due to this biased sharing of electron and not a complete transfer from one element to another, the bond between HF can be termed as polar but not ionic.

• Molecular weight = 20.006 gm/mol.
• IUPAC Name- Fluorane
• Being a polar molecule, HF can easily dissolve in water and the aqueous solution of HF is termed as hydrofluoric acid which is an extremely strong and caustic acid.
• Melting point = -84˚C (polar molecules usually have a high melting point)
• Boiling point = 19.5˚C. The b.p. is low in comparison to water because HF forms only one hydrogen bond per molecule whereas water has two H-bonds per molecule, which means two lone pairs. More the number of lone pairs, the greater is the amount of heat required to achieve the boiling stage.

• Industrial
In laboratories and industries, hydrofluoric acid is applied to the etching of glass and metal. It is also used as an effective catalyst in oil refineries (to produce gasoline) and nuclear reactors.

• As a cleaner and dust remover
Due to its corrosive nature, hydrogen fluoride in its liquid form is used to remove rust from various substances, polish crystals, and remove water and dirt spots.

Hydrogen fluoride is a colorless and odorless substance used in industries and is a diatomic molecule due to which its atoms have an unequal value of their electronegativity that causes unequal dispersion of charge across H-F bond formed.

So, guys, I hope you have got the answer to the question of the polarity of hydrogen fluoride. if you have any queries, feel free to reach out via the comment section. We will reach out to you as soon as possible.