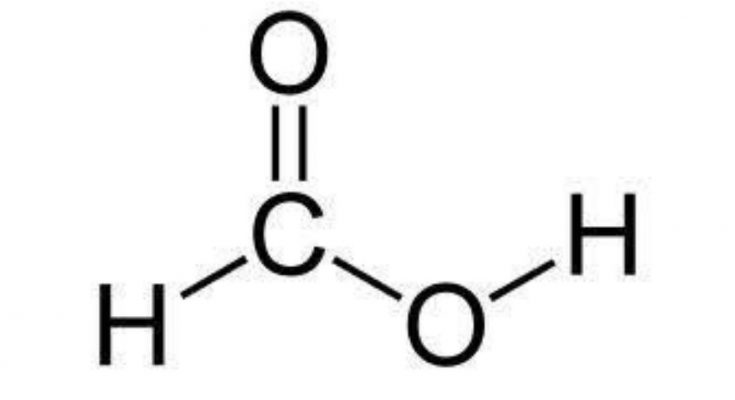 Formic acid was isolated from the distillation of ant bodies in earlier times and it is also produced from methanol industrially.

The molar mass of formic acid is 46.03 g/mol and its boiling point is nearly equal to the water molecule i.e., 100.8 °.
Formic acid is a colorless liquid with a pungent and penetrating odor. It is highly soluble in water and polar solvents. It exists as a hydrogen-bonded dimer in the vapor phase as well as in hydrocarbons.

Here, we will discuss the chemical bonding in the formic acid by drawing its Lewis structure, understanding its molecular geometry, and hybridization. Then, we will move towards the polar nature of formic acid.
Let us start with the Lewis Structure of Formic acid, HCOOH.

As per the Lewis rule or octet rule, an atom tends to bond with other atoms in such a way that every atom has eight electrons in its valance shell except hydrogen and helium.

The drawing of Lewis structure consists of the following steps:

Step 1: Count the total number of valence electrons in the molecule by writing down the electronic configuration of the atom.

Step 3: Arrange all the valence electrons in the skeletal structure of the molecule.

We have 18 valence electrons, which need to be arranged in the Lewis structure of the formic acid. First of all, start with the carbon atom as it is a central atom. The carbon atom will be surrounded by eight electrons as per the octet rule.

The remaining six electrons will be distributed in the OH group bonded to the carbon atom. Therefore, the possible Lewis structure of formic acid would be: 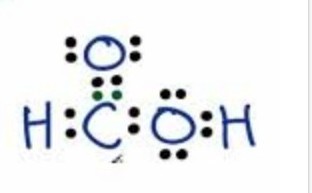 The molecular geometry or shape can be predicted by the VSEPR theory. It considers the repulsions between bonding and nonbonding (lone pair) valence shell electrons.

According to the Lewis structure of formic acid, the carbon atom is a central atom and it has three bond pairs without any lone pair of electrons. In VSEPR theory, the double bond is treated as one bond pair for the prediction of the shape of the molecule.

Hence, the shape of the formic acid can easily be predicted by the following table.

However, the actual bond angle is slightly different from 120° because there will be larger repulsion between the double bond pair and single bond pair. Hence, the H-C=O and O=C-O bond angles are greater than 120°.

Similarly, the bond angle around the oxygen atom i.e., C-O-H should be 109.5 ° being a tetrahedral geometry. But, the C-O-H bond angle is 106 ° to minimize the repulsion between two lone pairs present on the oxygen atom.

The bond lengths, which are determined from x-ray diffractometer, are shown in the following figure:

The hybridization of the carbon and oxygen atom in the formic acid can be determined by the valence bond theory (VBT) and steric number.

The hybridization of the carbon atom in formic acid can be determined in the following way: 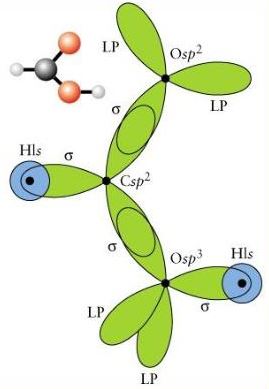 The hybridization and shape can also be determined from the methods explained above or directly from the steric number.

The steric number is equal to the sum of the number of atoms bonded to the particular atom and the number of lone pairs of electrons at the same atom.

The net dipole moment and distribution of charges decide the polarity of the molecule. The electronegativity values of the hydrogen atom, carbon atom, an oxygen atom are 2.5, 2.2, and 3.5, respectively.

Hence, the C-H bond is slightly polar. The O-H and C-O bonds are polar covalent bonds. It creates a dipole in C-O bonds with a partial positive charge on carbon and a partial negative charge on the oxygen atom. Similarly, the O-H bond is also dipole. It leads to the polar nature of the formic acid.

The charges are also not evenly distributed in the formic acid and hence, formic acid is a polar molecule. It is highly soluble in water and most of the polar solvents being its polar nature.

Formic acid is an organic compound with a pungent smell. It is the first member of the carboxylic acid family.
Here, we have studied the basic properties of formic acid concerning its bonding nature.

Feel free to ask your queries regarding the bonding nature of formic acid.