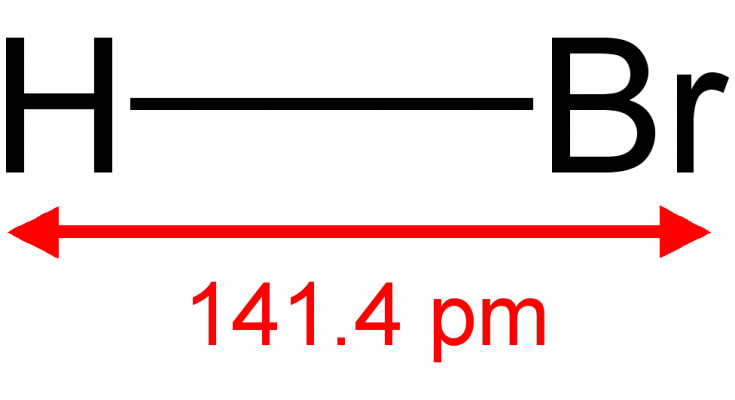 Hydrogen bromide, HBr is a hydrogen halide compound owing to the fact that bromine belongs to the halogen family. Quite a corrosive and dangerous chemical, it can be useful too in a lot of ways.

It is used to prepare a variety of organic and inorganic bromine compounds. Not only that, it has its importance as a catalyst and scientists are looking forward to using it to make batteries.

HBr comes in the form of an acrid colorless gas and is soluble in alcohols and organic solvents.

Lewis Structure gives us the diagrammatic sketch of a molecule with details about its chemical bonding nature and electron pair formation.

If we are interested in having an idea about the internal structure and nature of a given molecule, we need to learn about the sigma pi bond formation and also about lone pairs.

Also known as electron dot structure, we use Lewis symbols so that we can find out the electronic configuration of the inside atoms of a molecule or ions.

Using dots, single and double lines according to the nature of bonds, the Lewis Structure is the first step towards finding out about the properties of a chemical compound, be it hybridization or polarity.

Electron loss signifies the increase of positive charge hence we use the sign ‘+’. The gain of electrons increases the number of negatively charged electrons therefore we use the ‘-’ sign.

For developing the molecular structure, only knowing the number of valence electrons is not enough. We also need to identify the central atom.

How can we do this?

This is considered to be the central atom. Let us proceed further.

Now, let us sketch the skeleton diagram of the molecule. By doing this, we can understand the position of the single bonds more appropriately.

Now that we have drawn the molecular skeleton, we need to focus on the next step, i.e. the octet fulfillment.
Have you heard about the “octet rule”?

The octet rule is basically concerned with the noble gas electronic configuration. It states the tendency of an atom inside a molecule to have eight electrons in its outermost or valence shell.

While we are finding out the Lewis Structure, we also need to focus on the octet fulfillment- starting with the electropositive atoms, let us proceed towards octet completion.

The penultimate step in this process is based on finding out the requirement of multiple bonding. After we are done with octet fulfillment, we have to check whether we need to build any double or triple bonds.

The skeleton diagram has been sketched, single, double bonds have been drawn and the octet rule has been verified. As we come to the final step, now we are left with the formal charge concept.

The above diagram gives us the formula to calculate the formal charge.

Thus, we need to check whether the atoms inside the given molecule have the least value of the formal charge.

Once done, our Lewis structure is complete.

Let us now calculate this for HBr.

HBr or Hydrogen Bromide molecule consists of one hydrogen atom and one bromine atom.

Hydrogen has only one electronic shell with one electron and needs only two electrons to achieve octet fulfillment. ( it follows the helium configuration).

Bromine with an atomic number of 35 belongs to Group 7 like Chlorine and Fluorine and therefore has seven electrons in its outermost shell.

Since there are only two atoms in Hydrogen Bromide, we do not have to be concerned about the central atom concept.

According to Step 3 of Lewis Structure formation, we now have to draw the skeleton diagram of HBr.

Let us place the lone electron around the Hydrogen atom and the seven electrons around the Br atom. If we look at the sketch, we will see that it has achieved octet fulfillment.

Keep in mind, hydrogen needs just two atoms to complete its octet configuration as it follows helium noble gas. Bromine got eight electrons around itself and hence, octet formation has been done and so is the single bond.

There is no need for multiple bond formation here. We will check the formal charge according to Step 6.

Now, HBr has one single bond and six electrons or three lone pairs around Bromine. Our Lewis Structure of Hydrogen Bromide is done.

Let us go to the next concept of bonding

Hybridization is another extremely crucial topic of concern when it comes to the chemical bonding nature of a molecule.

While Lewis Structure gives us the visualization of how a molecule can look in 2D format, hybridization gives us the idea about why certain atoms tend to combine in a certain fashion inside a molecule.

So, if we want to learn in detail about HBr, only knowing the Lewis Structure is not enough, we also need to learn about Hybridization.

Hybridization deals with the overlap of atomic orbitals inside a molecule to form hybrid orbitals. For HBr, we need to look at the electronic configuration of both Hydrogen and Bromine.

So, the electronic structure inside HBr looks like this:

Therefore, the Bromine atom has three electron lone pairs around itself and one bond with hydrogen.

This leads to four electron pairs and thus Br in hydrogen bromide is tetrahedral with a dihedral angle of 1090 to give sp3 hybridization.

Here the s orbital of hydrogen combines with the 4p orbital of bromine.

Due to a higher level of effective (stronger) nuclear charge for valence shell electrons at Bromine rather than at Hydrogen, the sp3 hybrid orbitals point away further from the H-Br sigma bond.

Polarity is an interesting concept when it comes to chemical compounds and molecules. Do you know that difference in electronegativity can lead to polarity?

This is basically focused on the distribution of charges inside a molecule: when there is a difference in the positive and negative charges we see the rise of dipole moment, which has a net value that makes a molecular compound polar.

When it comes to HBr, let us find out whether it is polar or non-polar.

Are you aware of the fact that the Bromine atom has a higher electronegativity than Hydrogen?

Br has an electronegativity value of 2.96 whereas hydrogen has only 2.2.

This leads to quite an electronegativity difference which makes HBr a polar molecule. For more detail, you should also read out the polarity of HBr.

What is molecular geometry and how can we determine it?

Molecular geometry is concerned with finding out the shape of a molecule via some theories.

The most common is the VSEPR model i.e. Valence Shell Electron Pair Repulsion Model Theory which determines how a molecule is going to be shaped according to the electron position and bond formation.

HBr has a linear molecular shape and has a bond angle of 180 degrees. 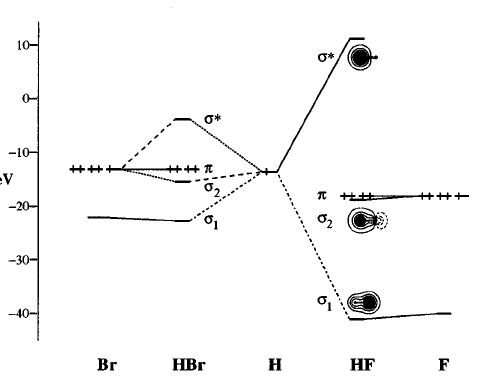 HBr is a heterogeneous diatomic molecule. The molecular orbital theory is based on the chemical bonding concept of molecules.

It is one of the most descriptive and diagrammatic representations of bonding where we deal with orbitals and energy levels inside a molecule.

Interaction happens between s and p orbitals: s of Hydrogen and p of Bromine.

Since Bromine is more electronegative than Hydrogen, the p is at a lower energy level than 1s of hydrogen.
The overlap results in sigma bonding and sigma-antibonding orbitals.

In this article, we read about the Lewis Structure, Hybridization, Polarity, Molecular Geometry, and MO Diagram of Hydrogen Bromide molecule.

HBr is an interesting chemical compound with useful properties and it is important that we learn about its internal structure for a better understanding of the molecule as a whole.