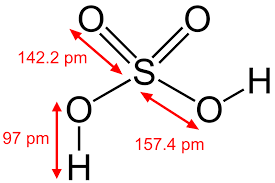 H2SO4 is a chemical formula of Sulfuric acid which is commonly known as Oil of Vitriol. It’s a mineral acid composed of elements like oxygen, hydrogen, and sulfur. It has a molecular weight of 98.079 g/mol. H2SO4 works as an oxidizing and dehydrating agent. Furthermore, it’s diprotic in nature which holds the capacity of releasing two protons together.

It is colorless, odorless, and extremely corrosive in nature. It has a wide variety of industrial uses, also used in petroleum refining to wash impurities of refinery products. To understand its structure, shape and polarity continue to read the article.

What is the Lewis Structure?

Lewis structures commonly known as lewis dot diagrams or electron dot diagrams are representations of valence shell electrons in a molecule in which electrons are shown as dots.

They are helpful to know about molecular geometry.

Why is Lewis Structure Important?

They play a vital role in predicting the type and number of bonds which can be formed around an atom.

The drawing of a Lewis Structure is the first step towards predicting the 3-D shape of molecules.

This further helps in understanding how the atoms bond, the physical properties of the molecule, and it also plays an important role in the way that biological molecules interact with each other.

While drawing the lewis dot structure for any chemical formula one needs to keep the following points in mind to avoid any mistakes.

• Find the total number of valence electrons of hydrogen, sulfur, and oxygen atoms.

• Now, the assigning of lone pairs is done on each atom of the molecule.

• After assigning the pairs, check the stability until the most stable structure is obtained.

Note – Lone pairs can be converted into bonds until we get a stable structure.

To draw the Lewis structure of H2SO4 we will first have to determine the number of valence electrons in the molecule.

The hydrogen atom has 1 electron in its valence shell and requires one more electron to reach the stable state.

Therefore, the total number of electrons for H2SO4 is:

Step 2 – The electrons from the hydrogen atom may also be considered as 2 negative charges as they do not have much role to play in the structure.

Step 3 – Drawing the basic structure Sulphur is taken as the central atom which is joined with all the four oxygen atoms through the single bond to calculate the number of electrons further required to complete the octet of the given atoms.

Step 4 – Now looking at the structure it is clear that two oxygen atoms, as well as the sulfur atom, have a complete octet.

Although it is seen here that sulfur after the formation of four single bonds now has ten electrons in its valence shell.

However, this is should not trouble you because we know that sulfur belongs to the third row of the periodic table and is allowed to have an expanded octet.

Step 5 – Therefore, we are now left with the two oxygen atoms that need one electron each to achieve their stable state, and in an attempt to do that they form a double bond with the sulfur atom.

Step 6 – The final structure of sulphuric acid, therefore, looks like this 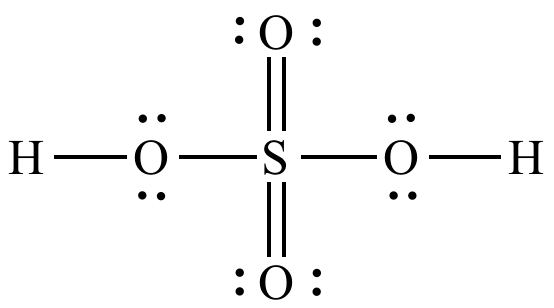 Step 7: To establish the efficiency of our derived Lewis structure let us calculate its formal charge.

The formal charge is the theoretical concept to determine the competence of the assumed lewis structure.

Step 8: For the best possible Lewis structure of a compound the formal charge is expected to be nearly zero. It is calculated using the following formula:

Step 9: For calculating the formal charge for H2SO4 molecule charge on each atom is calculated separately:

For Sulphur atoms, Number of valence electrons in free state = 6

Similarly for Oxygen atoms, the number of valence electrons in free state = 6

Step 10: Therefore, the total formal charge of the H2SO4 molecule becomes zero indicating that the Lewis structure drawn above is correct.

Do you know? That sulfur can accommodate more than eight valence electrons.

The molecular shape of a molecule and its polarity are dependent on the atoms involved in its formation. The electronic configuration including lone pairs gives the most stable shape to the molecule.

The electronegativity of atoms and the type of bond formation determine whether a molecule has polar or nonpolar nature.

Hence, its structure is classified as a tetrahedron with 109.5 degrees between the Sulfur and the four Oxygen atoms.

Hydrogen and Oxygen form a linear bond with an angle of 180 degrees.

The H2SO4 molecule is polar in nature because of the bent H-O-S bonds which are present in it. As a result, the charge distribution across the molecule becomes non-uniform. 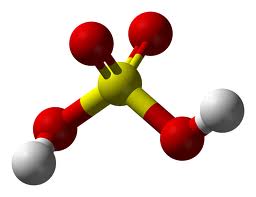 It’s the process in which atomic orbitals fuse to form new hybridized orbitals, which in turn influences molecular geometry.

The new orbitals are known as hybridized orbitals. It happens only during the formation of bonds, not in gaseous form.

Sulfur atoms have bonds with four other atoms in molecules.

As per the Valence Shell Electron Pair Repulsion Theory (VSEPR), the atoms will separate as far as possible to result in bonds that are 109.5 degrees apart from one another.

Calculating the hybridization of any compound is easy by simply following the below formula.

H= ½ (no. of valence electrons in central atom + no. of monovalent atoms – cation + anion)

We know that when there are four hybrid orbitals.

Sulfuric acid has tetrahedral geometry. It is because of the central sulfur atom, there exists a bonding of four groups including two of O and two of -OH.

Furthermore, it has no lone pair of electrons.

According to the VSEPR theory, the lowest energy geometry for this kind of molecule is termed tetrahedron geometry.

Type of Bonding in H2SO4

This is a bisulfate anion that takes electrons from other metals. Hydrogen, sulfur, and oxygen atoms form covalent polar bonds.

This further means that the dipole moment is in effect, leading to which compound has a positive and negative charge to it.

In addition to this sulfur has high electronegativity and so does oxygen. This is the reason why electrons are closer to these two elements instead of hydrogen.

As we can see in the Lewis Structure, H2SO4 takes sulfur as the center atom.

Two of the oxygen atoms are double-bonded to the sulfur atom, while the rest of the two are single-bonded.

Likewise, a hydrogen atom is attached to each single-bonded oxygen atom.

H2SO4 molecule is highly polar and its dipoles are also closer to each other. It is because of small-sized hydrogen atoms.

In comparison to the other molecules, hydrogen is most likely to bond with the oxygen atoms, creating a strong bond.

The bond is considered to be strong as it requires a large amount of energy to convert it into a gaseous and liquid form.

One reason can also be stated here to define the strength of the bonds because as we know oxygen is highly electronegative to the hydrogen causing the molecules to be held tightly.

The H2SO4 lies under the category of strong acids. It has a tetrahedral geometry as explained above. Apart from this, the hybridization of the central atom is sp3.

If you have any questions in your mind. Please feel free to ask them in the comment section.