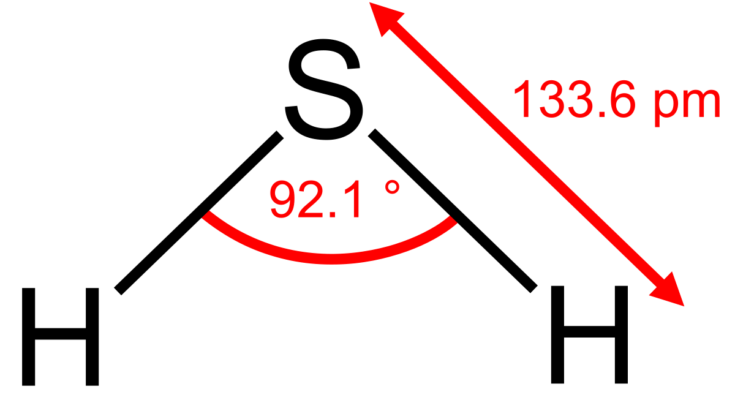 H2S or hydrogen sulfide gas is colorless in nature. With many other various pet names like sour gas, sewer gas, etc this gas is poisonous and corrosive as well.

I am sure you are not expecting a good odor from this gas! Well yes, you are right, hydrogen sulfide gas smells like rotten eggs!!

I have also written specifically on it, check out the post on the covalent bonds of H2S.

Let us check these fundamentals with the explanation of the lewis structure of H2S.

The lewis structure of H2S is as below. 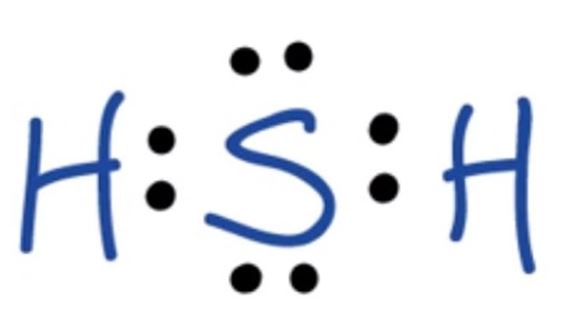 Now to understand this we need to know the steps to draw a lewis structure at first.

First and foremost it is important to determine how many valence electrons are present in the compound.

In this compound valence electron will be as following:

Now the next work will be, finding out the central atom.

After finding the central atom we need to sketch a skeletal structure of H2S with single bonds only.

It’s good to know that lewis structure is all about electrons and atoms fulfilling their octet. Every atom tries to fulfill its octet to attain stability.

In this compound, sulfur has 6 electrons, so to attain octet i.e 8 electrons, it needs 2 more electrons. Similarly, hydrogen has only 1s shell and its octet can be filled with 2 electrons only.

Now the next task for drawing the lewis structure of H2S will be filling up the remaining electrons (after the formation of single bonds in the sketch) around the sulfur atom.

Lastly, we need to check that all atoms are having their lowest possible formal charge to complete the lewis structure of H2S.

For making this whole learning about drawing a Lewis structure, a bit more simple, I have jotted down the steps below.

Step 1: Find out the total number of valence electrons in the molecule. Do take care of +, – signs while calculating.

Step 2: Choose a central atom; generally the atom with the highest bonding sites.

Step 3: Draw a skeletal structure with single bonds only.

Step 4: Fill up the octet of the atoms with the remaining electrons. Keep in mind to start with the electronegative atoms and proceed to the electropositive one.

Step 5: Give multiple bonds if required for fulfilling the octet of the atoms.

Step 6: At last make sure all the atoms are having their lowest possible formal charge. You can calculate the same with the formula given below

Moving on to the next topic, let’s put some light on the hybridization of H2S!

According to Drago’s rule, H2S has no hybridization.

Drago’s Rule – This rule states that no mixing of orbitals or we can say no hybridization takes place if the energy difference between the atomic orbitals of the atoms is too high.

So there will be no hybridization of the central atom. There are certain conditions for this rule to come into action, they are-

2. The surrounding atoms should have electronegativity below or equal to 2.5.

3. There should not be any positive charge present in the central atom.

Well surely, H2S does pass all the conditions.

The central atom i.e sulfur is in the 3rd period, it has 2 lone pairs and no positive charge. Also, the electronegativity of hydrogen is 2.1.

Thus this explains that H2S has no hybridization.

Moreover, adding to this rule, another factor is that the vacant orbital of Sulfur and 1s orbital of Hydrogen has a very large energy difference.

So there is no hybrid orbital formation. Thus, this is another explanation saying, H2S has no hybridization.

The molecular geometry of H2S is bent. 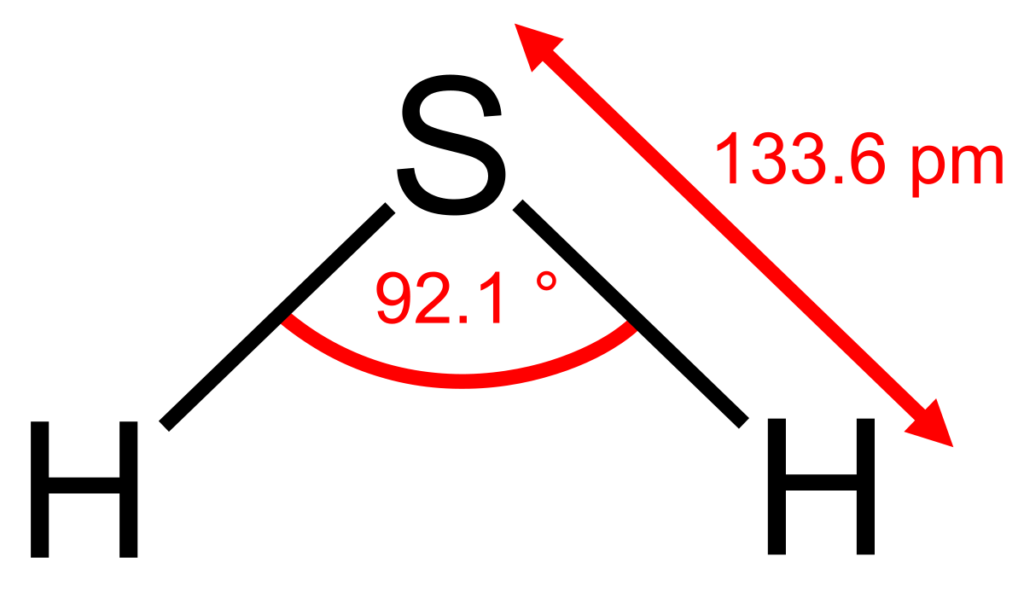 Another important point is the electron geometry of H2S, which is tetrahedral. Now before jumping into the difference between these two, let us see how to find them.

So, both the geometries can be found from the VSEPR chart. The chart is attached below! 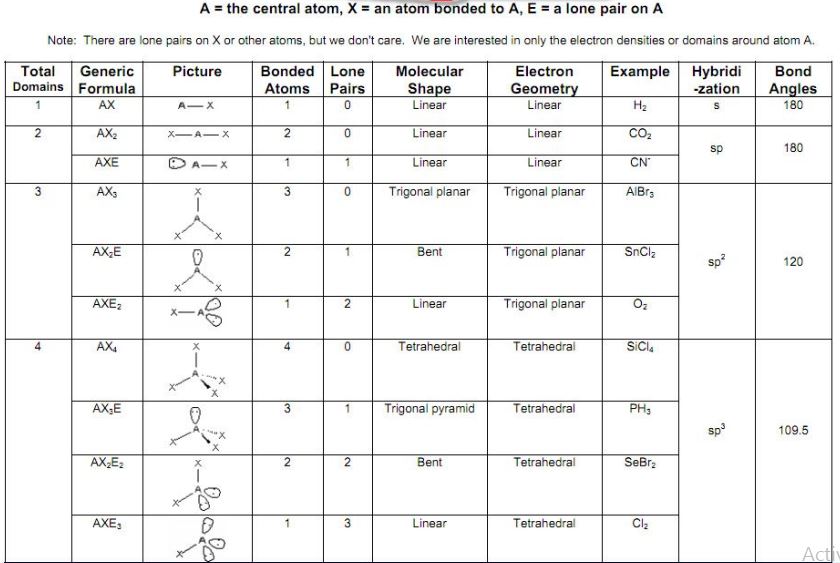 From this chart, we can see that H2S is an AX2E2 type molecule, where X represents the surrounding atoms and E represents the lone pairs of the central atom.

Thus, we can say that the molecular geometry of H2S is bent.

Moving to the difference between electron geometry and molecular geometry.

Basically, molecular geometry only takes into account the atoms of the molecules while determining the shape. Whereas electron geometry considers all the electrons present.

The later one considers the lone pair as well, which causes the major difference in the shape.

Another point to keep in mind is that the repulsion between the 2 lone pairs in H2S also plays a major role in making its bent molecular geometry.

The repulsion changes the bond pairs from a straight to bent shape.

All these explain the molecular geometry of H2S.

The molecular orbital diagram of H2S can be explained in the following way.

This is the MO diagram of H2S. The left-hand side will contain the atomic orbitals of sulfur i.e 3s2 3px2 3py1 3pz1.

And on the right-hand side, there will be atomic orbitals of hydrogen.

From a MO diagram of H2S, we can get to know about the bond order, bond length, and bond stability of the compound as well.

Also, it should be kept in mind that the vacant orbitals of sulfur and 1s of hydrogen have a large energy difference. But the MO diagram can be formed after that as well!

let us also study the preparation methods of H2S in the below subtopic.

The molecule H2S is considered to be a polar molecule as the molecule has a bent shape. The dipole across both H-S bonds does not cancel out each other and has a net dipole moment.

For more detail, I request you to also read once the article on the polarity of H2S.

Hydrogen sulfide can be produced in different ways, some of those are,

The most common way is the preparation from sour gas (any gas having high H2S content).

Hydrogen sulfide can be obtained by treating hydrogen with molten elemental sulfur at ~450℃.

Another qualitative analysis, where thioacetamide is used to produce H2S.

Now, we all know H2S is used in many reactions for the formation of different compounds.

For an easy understanding of these reactions, we need to first have an idea about the structure, bonding, and hybridization of hydrogen sulfide that are explained above!

This article revolves around the lewis structure, hybridization, bonding of H2S. These things are very essential to know about so that we can learn equations involving H2S smoothly.

I hope after reading the article you gained a little bit of knowledge about this compound. Though there is a lot more to learn, it’s good to go step by step! After all, chemistry is a very vast subject!

If you have any questions regarding any topic in this article, feel free to ask me out anytime!