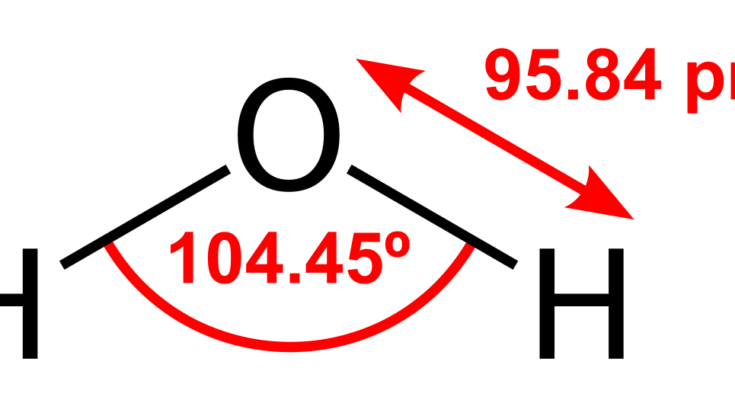 H2O is the molecular formula of water, one of the major constituents of the Earth. A single molecule is made up of two hydrogen atoms and one oxygen atom, which are bonded through the covalent bond. Moreover, two or more H2O molecules connect with the help of hydrogen bonds to form a compound.

It is interesting to realize that the covalent bonds are stronger than the hydrogen bonds, that is the reason why water readily reacts with the majority of the chemical elements from the periodic table.

The Lewis structure, or also called an electron dot structure, is a diagrammatic representation of determining the total number of valence electrons present in an atom, which are ready to undergo bond formation to form a molecule and ultimately a compound.

The valence electrons are shown by drawing them as dots around the symbol of the atom, mostly in pairs.

The maximum number of dots that can be drawn is eight per atom, as per the octet rule. Moreover, the formation of a bond because of reacting valence electrons are shown with the help of the lines.

The atomic number of a hydrogen atom is one, which makes its electronic configuration 1s1. As the 1s shell can accommodate a maximum of two electrons, there is a dearth of one more electron.

It makes a single hydrogen atom to have one valence electron.

Besides this, in the case of oxygen, its electronic configuration is 1s2 2s2 2p4 where 2p shell can accommodate six electrons.

As there is a dearth of two electrons, the total number of valence electrons in an oxygen atom is six.

Contents show
What are the valence electrons?
What is the Octet rule?
Lewis Structure of H2O
The Geometrical Structure of the H2O molecule
Hybridization of H2O molecule
Molecular Orbital diagram of water (H2O)
Conclusion

The valence electrons are ‘free electrons’ present in the outermost shell of the atom. The nucleus holds the outer shell weakly as it is farthest in the distance.

Moreover, if the valence electrons are unpaired, they become highly reactive in nature by either accepting or donating electrons to stabilize its outermost shell.

It is interesting to realize that the larger the number of valence electrons, the stronger will be the ability to accept the electrons.

Whereas, the smaller the number of valence electrons, the stronger will be the ability of the atom to donate them.

What is the Octet rule?

According to the Octet rule, the maximum of valence electrons that an atom can have is eight. Moreover, these eight electrons are drawn only around the symbol of the atom in the Lewis structure.

The Lewis structure of H2O is drawn in such a manner that the deficiency of each atom is fulfilled.

The Lewis structure of hydrogen and 2 oxygen atoms shows a total of eight valence electrons participate in the bond formation to form a single triatomic H2O molecule.

Here, we need to understand how the Lewis structure is drawn for the H2O molecule: 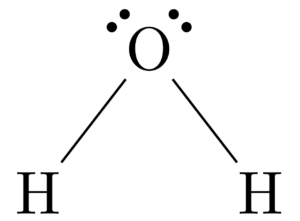 The Geometrical Structure of the H2O molecule

The bond angle among hydrogen-oxygen-hydrogen atoms (H-O-H) is 104.5°. From this, it can be understood that the geometrical structure of a single H2O molecule is bent.

It is explained with the help of the Valence Shell Electron Pair Repulsion (VSEPR) theory, which says why irrespective of having two pairs of lone electrons on the oxygen atom the bond angle is reduced to 104.5°.

The ideal bond angle for a bent-shaped molecule is 109.5°.

According to the Lewis structure, there exists lone pair when all the valence electrons around the atom are not paired.

Similar is a case of the oxygen atom in the H2O molecule, where two lone pairs exist.

The bond between each oxygen and hydrogen atom in a water molecule is sigma (σ) with no pi (π) bonds.

As we know, sigma (σ) bonds are the strongest covalent bonds. As a result, there is high stability between the oxygen and the hydrogen atom.

It is the two lone pairs on the oxygen atom which makes all the difference. The hybridization of a water (H2O) molecule is sp3, where its oxygen has been hybridized.

According to the diagram, it can be analyzed that the single oxygen atom in the water (H2O) molecule has one 2s orbital and three 2p orbitals. These four altogether leads to the formation of four sp3 hybridized orbitals.

It can further be explained with the help of a molecular orbital diagram of the H2O molecule. 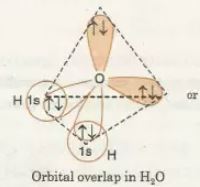 The 2s orbital and three 2p orbitals of the oxygen atom forms four new hybrid orbitals which further bonds by undergoing overlapping with the 1s orbital of the hydrogen atoms. 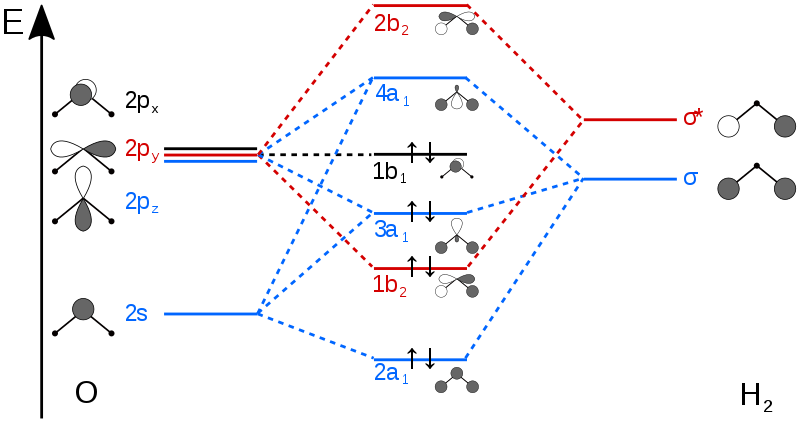 The molecular orbital diagram is a pictorial representation of determining chemical bonding between the molecules of a compound.

Furthermore, the molecular orbital diagram helps with determining how two sigma bonds have been formed and the effect of the lone pairs on the structure.

From the above diagram, it can be seen that the six valence electrons are bonding with the 1s orbital electrons of the hydrogen atom.

The mixing and overlapping are occurring among the atomic orbital of similar energy.

It is taking place in such a manner that the bonding electrons in lower energy are forming antibonding molecular orbitals of higher energy.

The left oxygen electrons do not overlap further due to the scarcity of electrons.

The oxygen atom has its electronegativity higher than hydrogen.  Due to this, oxygen has a higher negative charge, whereas hydrogen has a positive charge. It makes oxygen attract nearby electrons and form a bond ultimately.

On the other hand, the hydrogen does not react with nearby molecules as it has already fulfilled its orbital and bonded with oxygen through a sigma bond, which is not easy to break.

It leads to the formation of polarity in an H2O molecule, irrespective of having a net neutral charge.

You can also check an interesting article written about the polarity in water.

It is the reason why the bond angle that should have been 109.5° is 104.5°. The hybridization of the H2O molecule is sp3 because it has one s orbital and three p orbitals mixing to form four hybrid orbitals.