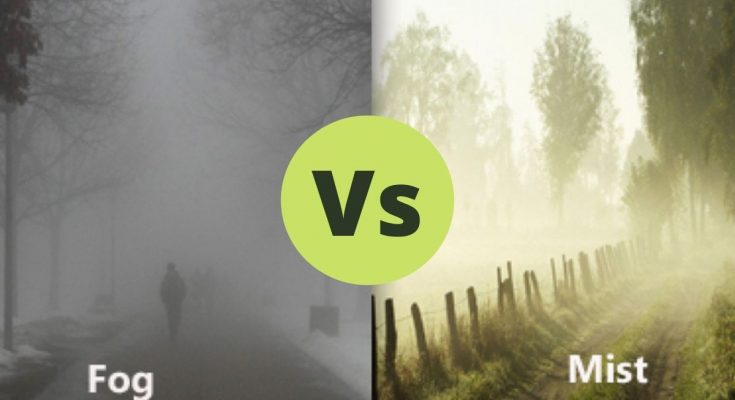 When you wake up early in winter mornings, you can see the outside world is covered with thick clouds formed on the ground. You may see thin layers of clouds forming on the mountain areas in any season.

Some people call these clouds fog. But not all dense white air is fog. It can also be mist. Like many people, you may also not know the difference between fog vs. mist.

Although both fog and mist are formed by water condensation because of a sudden drop in temperature, there are some differences between these two. They do not have the same density, and the locations they form in also vary.

Comparison Between Fog Vs Mist

To understand the difference between fog and mist, first, you need to know what they actually are and how they are formed.

Here is what you need to know about fog and mist.

What is Fog and How it is Formed?

There are tiny water particles in the air around us. Fog consists of vapor, which is actually water in the form of gas.

When the temperature of the air containing a lot of water vapor suddenly falls, the air pressure causes condensation.

Again, when vapor gets cold, it then turns into liquid. Thus, fog appears when the liquid accumulates on the dust particles in the air.

Fog looks like a cloud, but it is near the ground, not up in the sky. The dust particles usually move up and form clouds in cold temperatures. But as the temperature gets cold in the ground, it does not have to go up anymore. Instead, it forms the cloud near the surface.

We especially see it in valleys and around water bodies where humidity is high.

Must Read: Types of Humidity

Fog can be so thick that it becomes difficult to see things at a little distance. However, the visibility of fog is less than 1 km. After 1 km, you will find it despairing.

• Radiation fog: Radiation fog is formed on clear nights with slow winds as the ground emits heat in the environment.

Since the temperature cools down and gets close to the dew point, the water vapor in the air condenses and creates fog on the ground.

• Advection fog: This type of fog occurs when warm moist air blows down on a colder surface. The heat is absorbed from the air by the ground lowers the temperature of the air and condenses it.

• Precipitation fog: This type of fog can be seen when drizzles of rain evaporate into dry air. Not only the air cools down but absorbs moisture as well. The drizzle reaches the dew point and forms fog.

• Upslope Fog: This kind of fog can be seen on the mountain slopes as humid air runs up the slopes.

• Freezing fog: It happens when very cold water droplets create fog in below zero temperatures. After that, it turns into ice in contact with any surface.

You may come across many more types of fog if you start researching them. As you can see, in all types, water or vapor comes in contact with the warm temperature and creates fog.

Many people consider mist to be a type of fog. They are right in many senses.

Like fog, the mist is also tiny water droplets that hang in the air on ground level. It follows the same process of forming water condensation.

However, the formation is less coalescing. So, the mist is not as dense as fog.

The tiny droplets of water are created when the warm water vapor in the air is rapidly cooled. Thus, the invisible gas in the air becomes visible as a thin layer of condensed water droplets.

But the mist is different from the fog. Not just in terms of where they are commonly seen, but also visibility.

It is less dense than fog and has visibility above 1 km. Also, in the case of mist, each water droplet contains more moisture than fog. You will feel the moisture after spending some time. Fog is much drier than mist.

Unlike fog, the mist does not have any type.

Different Between Fog and Mist

Overview of comparison between fog and mist:

Let us explain the differences between fog and mist so that you can understand better:

One of the major differences between mist and fog is the level of moisture in them. The mist contains more moisture than fog.

When you spend some time in an area where the mist is formed, you will find a thin layer of water accumulating on your cloth. You can also feel moist with your hand.

Mountain climbers or backpackers who travel to forest lands often find their clothes wet because of mist.

In the case of fog, the environment is drier. You will not feel too much moisture like mist. The particles of fogs contain less moisture than mist.

Although mist has more moisture, it looks less dense than fog. Compared to mist, the fog has a high density.

Therefore, when fog occurs, it becomes really difficult to see things around us. Sometimes, it gets so dense that you cannot even see someone standing a few feet away from you.

Mist is not as thick as fog. So, things are much more visible when mist occurs. However, it still covers the area with a thin layer of cloud, which means you will not see things so easily. Hence, in both cases, visibility is poor.

Fog Vs. Mist: Durability and Resilience

Fog and mist are natural phenomena that can last for hours. However, since fog has much more density than mist, it also lasts longer.

Sometimes, fog can turn into smog and last for days. People still talk about the Great Smog of London that lasted for five days.

The more dust or smoke particles fog gets, the denser it becomes. Fog also has high resilience. It can resist heat and strong wind. But the mist is not as resilient as a fog because it is not too thick. It can vanish at any moment if it faces fast wind or excess heat.

Both fog and mist are kinds of clouds that form at ground level. Fog has at least 5 to 6 types, such as radiation fog, freezing fog, advection fog, evaporation fog, and up-slope fog.

All types occur because of warm water vapor coming in contact with cold temperature, but the situations are different. Mist does not have any different types.

Fog might be thicker than mist, but it covers less distance than mist. Fog is visible up to 1 km. After 1 km, it will not be visible anymore.

On the other hand, the mist can reduce visibility by more than 1 km and seems hazy up to 2km.

Driving in Fog and Mist

Some people may not take it seriously to learn the difference between mist and fog. Nonetheless, it is important, especially if you are traveling. You should know when and where you can face fog or mist in your journey.

Fog occurs mostly during winter, early in the morning. In extreme cases, it can also form at night. 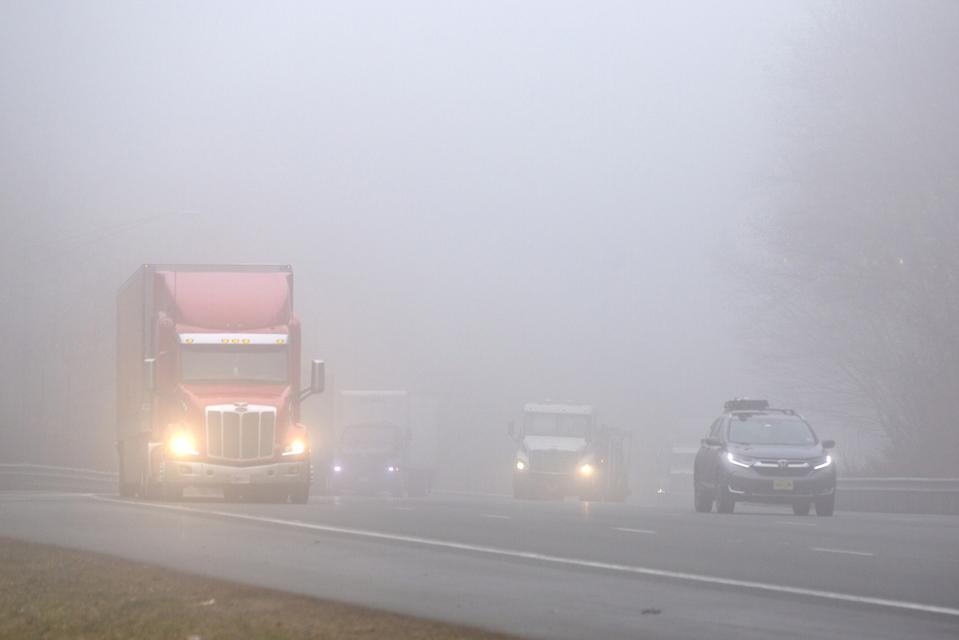 So, you must make sure the headlight of your car or motorcycle works properly during these times. Both you and the people on the road will be at risk on highways during fog.

You should also be careful about misty conditions. You might see things around you much clearer than foggy conditions, but it is still hazy for a long distance. Besides, the moisture from the mist can make the road slippery.

Therefore, you have to keep your speed slow. Do not make the mistake of driving fast to escape from fog and mist.

By now, you must have understood the difference between Fog Vs Mist. Fog and mist take place following the same process of water condensations, yet they are not the same. The difference may not seem very obvious.

Hopefully, you can differentiate them easily after reading this article. Understanding these two natural phenomena can help you travel safely.

Related Topic: Is Smoke a Colloid