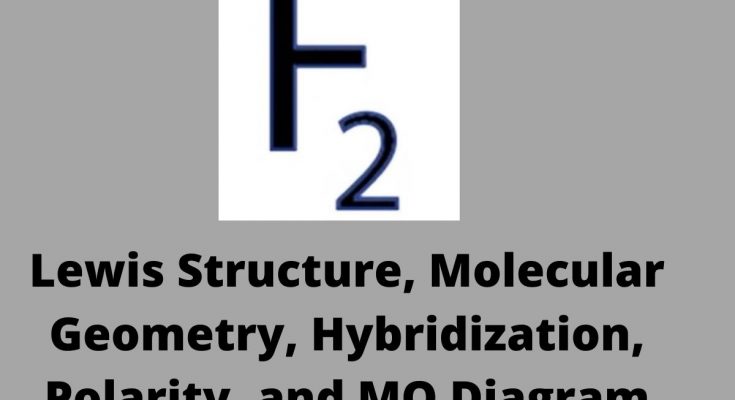 It is toxic in nature; it can cause chemical burns on the skin and can be lethal if inhaled. It is highly reactive, is capable of corroding metals, and is unstable at high temperatures.

The Lewis theory of chemical bonding helps us visualize the arrangement of atoms—how they are attached or bonded—in molecules.

The valence electrons in each atom are the ones that participate in the bonding, and hence they are the only ones displayed in the Lewis structures. It is to be noted though that this theory about the electronic structure is quite primitive and most limited.

Several atoms tend to seek eight electrons in their valence shell through chemical bonding; this is referred to as the octet rule and is reflected in the Lewis structure of a molecule.

Hydrogen is an exception, though; it seeks a duplet, not octet, because it has only one electron in its K shell, and thus needs only one more to achieve the maximum capacity of K shell.

Noble gases already have completely filled valance shells, so they do not need to bond/react with any other atoms/molecules. This is exactly why they are called “noble.”

Let us take a look at the chemical bonding represented by lewis structure in F2.

Step 1. Start by calculating the number of valence electrons in each atom of F2 and see how many more electrons each fluorine atom needs to form an octet.

Step 2. The case of fluorine is really one of the simplest ones. There is no rocket science going into determining that both fluorine atoms can share one pair of electrons and be happy and satisfied with their individual octets achieved!

The three unshared pairs of electrons on each fluorine atom are called the lone pairs.

Step 3. Now, let us construct a skeleton of the F2 molecule on the basis of the information presented in step 2. Both fluorine atoms share one pair of electrons and hence have a single covalent bond between them.

Do you know how much energy it would take to break this bond? It is 157 KJ/mol.

This is approximately half the energy required to break a carbon–carbon single bond. This low bond energy of fluorine explains why it is reactive.

Anyway, back to the main topic of the article! The fluorine molecule is neutral, i.e., there is no charge on it. In fact, each fluorine atom has a formal charge of 0 on it. Anyway, for your information, you may refer to the formula for the formal charge as provided below. 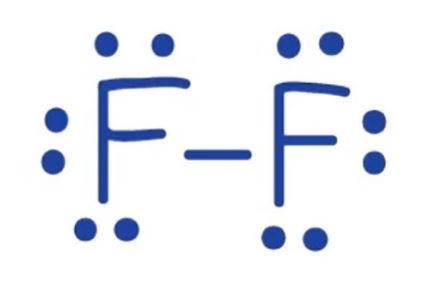 When the valence orbitals on two atoms in a molecule overlap by sharing a pair of electrons, a chemical bond is said to form between the two atoms.

Let us look at the ground state electronic configuration of fluorine atom(s) in F2 in terms of the orbitals.

In a fluorine atom, the valence orbitals—2s, 2px, 2py, and 2pz—hybridize together to form four identical sp3 orbitals, all of which have the same energy.

Three of these hybrid orbitals are fully filled (with two electrons in each), and the fourth one is half-filled (i.e., it has one electron) and thus can accept one more.

Another way of determining the hybridization of the central atom is by using the following formula.

Valence shell electron pair repulsion (VSEPR) theory is the preferred choice when it comes to determining the geometry of a molecule.

According to this, the constituent atoms in a molecule arrange themselves in a way that the repulsion arising from the valence shell electrons on all atoms is minimum.

The application of this theory to a molecule depends on stoichiometry, the number of bond pairs, and the number of lone pairs on the central atom. The table below lists various molecular stoichiometries and what geometries the molecule adopts on the basis of VSEPR.

Instead of going by the rule book, let us apply our common sense to the present case of F2. There are only two atoms, so there is practically only one choice for the two atoms to arrange themselves in three dimensions—linearly—irrespective of how many bond pairs and lone pairs there are.

Thus, F2 is a linear molecule! 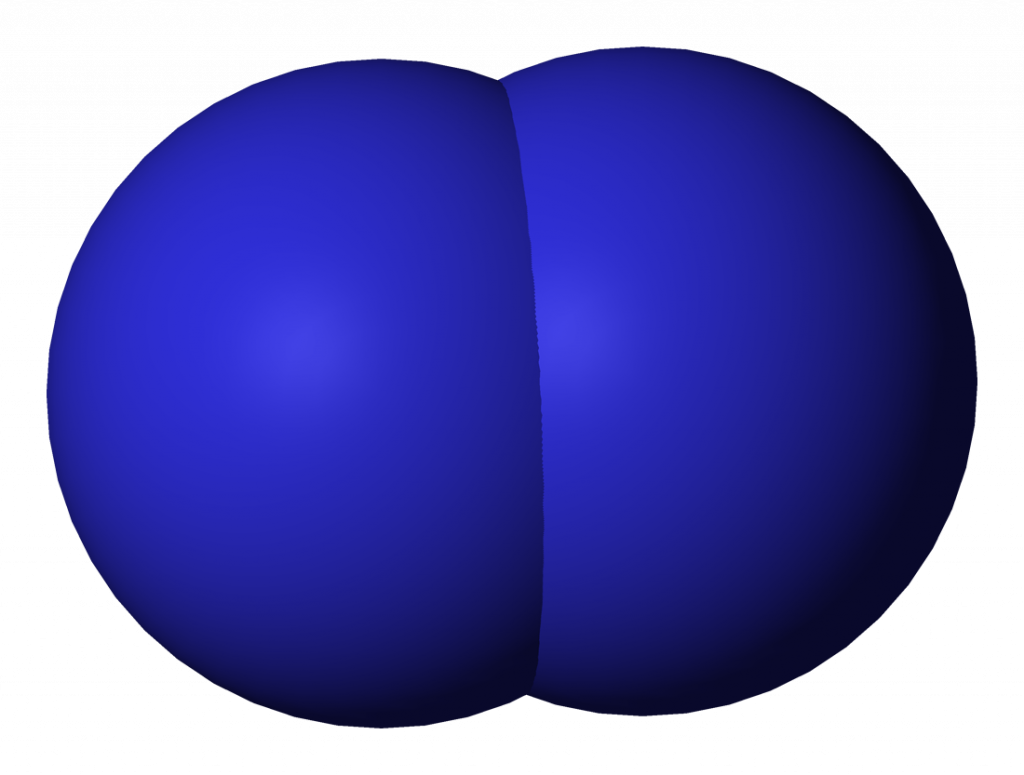 Let us have a look at the MO diagram for F2. The 2s orbitals of both F atoms mix to form a low energy bonding orbital and a high energy antibonding orbital (as shown below).

As shown, the highest energy antibonding orbital is the only one remaining unoccupied. We have already seen above in the Lewis structure that there is a single sigma bond between two F atoms.

Now, from MO theory, let us calculate the bond order in the F2 molecule using the following formula.

The case of F2 is a simple one because of the symmetry and diatomicity of the molecule.

In more complex molecules (polyatomic and asymmetric), the extent of mixing and thus the contribution of individual atomic orbitals to form a particular molecular orbital depends on the relative energy alignment of the atomic orbitals. 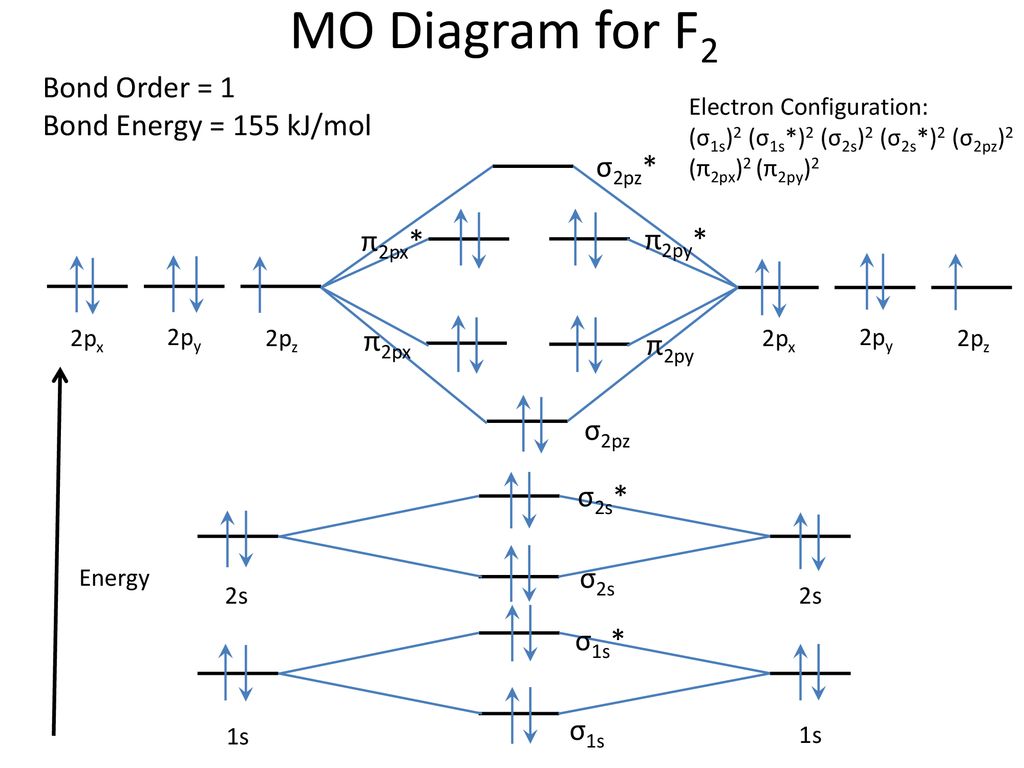 As you may have noticed, the F2 molecule is symmetric because both the constituent atoms are of the same element F, and thus there is no difference in the electronegativity of the two constituent atoms, thereby making F2 non-polar.

This implies that the dipole moment of the F―F bond is zero! As a result, the entire F2 molecule is non-polar in nature.

The overview provided in this article helps in establishing a basic understanding of the structure of F2 through chemical bonding.

In fact, one could extrapolate the information provided in this article to understand chemical bonding in other halogen compounds—Cl2, Br2, and I2.