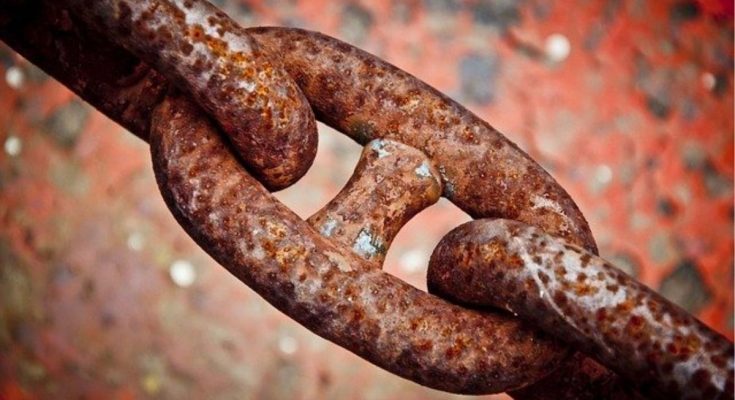 People often look for household methods to fix various objects. Trying to use things other than their usual usage probably seems a little weird at times, but they are cost-effective, easy-to-follow, and readily available.

You might have a bottle of vinegar in your kitchen, but you probably only use it for flavoring until now.

Does vinegar remove rust? Yes, we can use vinegar to strip off the layer of rust from iron objects as acetic acid (CH3COOH) present in vinegar reacts with rust (FeOOH) to form a salt (Fe(CH3COO)3) and water. This process is also known as the neutralization process.

It is readily available in your home and can be utilized outside of the kitchen, too.

Iron objects often rust and become flaky and coarse when exposed to moisture and air.

Luckily, there are many ways to remove rust and increase the longevity of iron objects, including one process that involves vinegar.

Read on to learn about vinegar. Can vinegar remove rust? Why it removes rust? What are its different varieties? What are some unusual ways to use it? 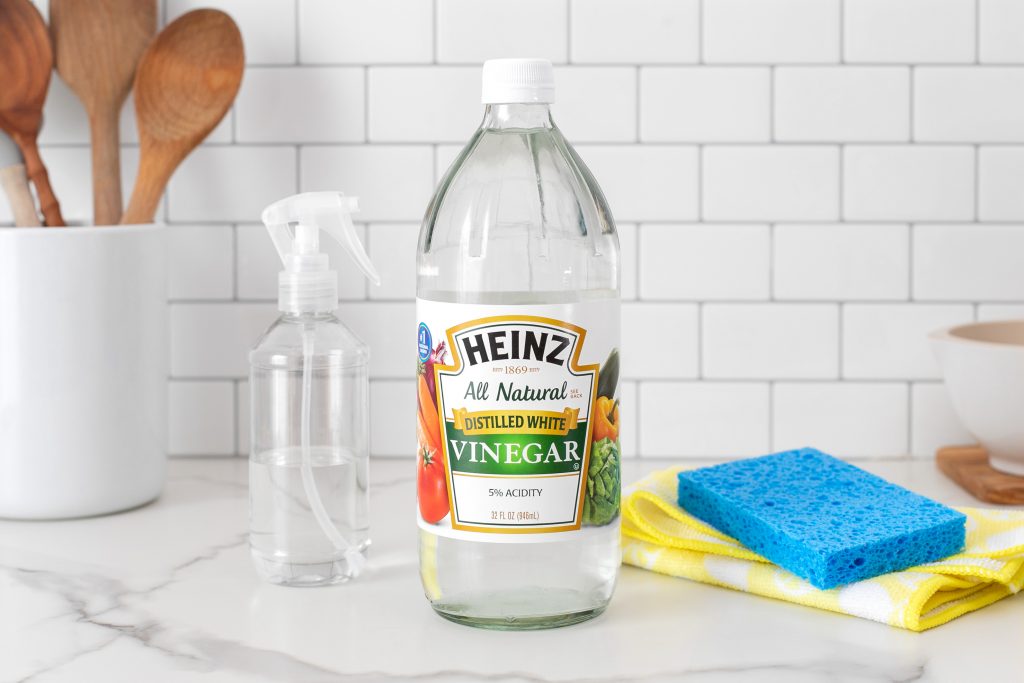 Vinegar is a liquid produced by the fermentation of ethanol into acetic acid. The bacteria carry out the process of fermentation.

Vinegar contains trace amounts of acetic acid (CH3COOH), water, and other chemicals, that may add flavor.

Vinegar spirit is one of the strongest forms of vinegar that contains 5 to 20 percentage of acetic acid.

Each sort of vinegar has distinct properties and offers some uncommon purposes. It becomes necessary to figure out its different types to utilize at the right places.

The reaction between vinegar and rust 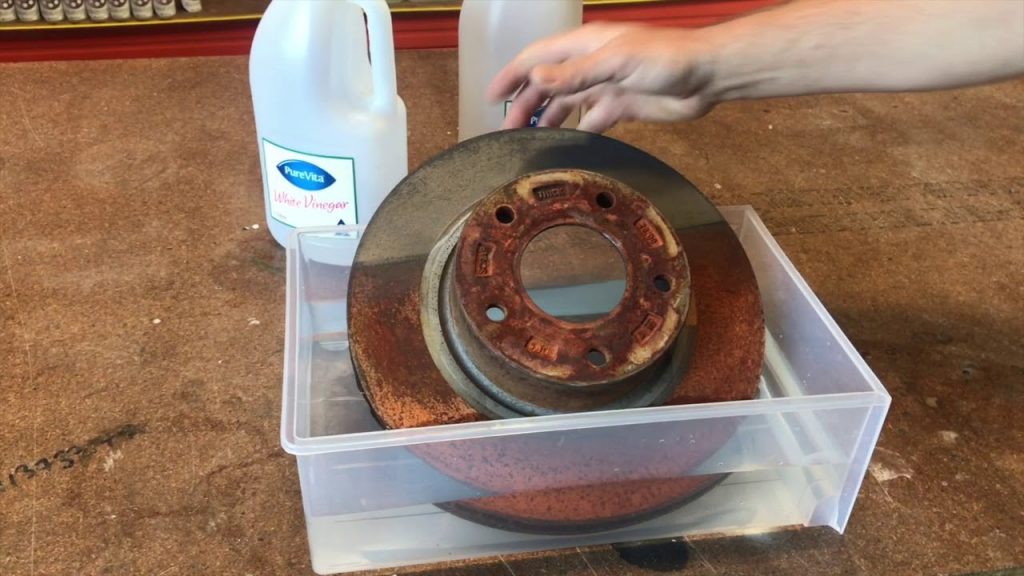 Vinegar is mainly a diluted solution of acetic acid and water.

However, it can have a few enzymes, vitamins, minerals, fiber, and other organic compounds as well. It depends on its method of preparation.

The molecular formula of acetic acid is CH3COOH.

The pH of vinegar is dependent on the amount of acid present in it. Most of its varieties have 5 percent acetic acid in solution and will have a pH of 2.4.

When metal oxide and acid react, they produce salt and water. This reaction is known as neutralization.

Therefore, when you submerge a rusted object in vinegar, the rust (iron oxide) reacts with the acetic acid present in it, forms salt and water.

Fe(CH3COO)3 (iron(III) acetate) is a salt that is soluble in water and adds a reddish-brown shade to the solution.

When a mixture of iron oxides forms on the surface of iron objects or structures, it is called rusting.

The rust forms when oxygen and iron react in the presence of water (or has high levels of moisture). A layer of a red, flaky substance forms on the surfaces that easily crush into a powder.

If you are wondering whether it can remove rust, you are right; it can.

Following are the directions to use vinegar for removing rust from iron objects:

Step 1: Fill a vessel with one gallon of apple cider vinegar or white vinegar. Also, add one cup of table salt. Now thoroughly stir the mixture.

Reduce the quantity of solution according to the size of the object.

Step 2: Place the object inside the vessel, submerging it completely.

Step 3: Wait for 20 minutes to 12 hours and see if the rust strips off the object.

Some objects may get cleaned within 30 minutes, while some can take a long time, up to 12 hours.

Step 5: After you have submerged your object in the solution, and you see the rust shedding, you can clean the object with the help of a brush.

Step 6: Make sure to wear a pair of rubber gloves and take the object out of the solution. Place it on a cloth and start brushing the remaining rust off of the object.

Step 7: Once your object is free of rust, make a solution of one cup of baking soda in one gallon of water and let your item stay in the solution.

Step 8: Stir the solution and then place the object in water for twelve minutes. It will neutralize the acidity.

Step 9: Once taken out, you can clean it with a cloth. Ensure that it is entirely dry when you set it aside.

In this section, we will tell you all about the different types of vinegar and their uses. 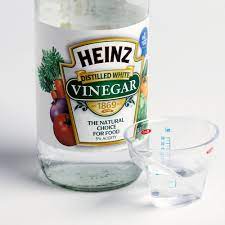 In general, one prepares it from a combination of around 5 to 10 percent acetic acid and nearly 90 to 95 percent water.

It is usually known for its super-efficient cleaning properties and is an all-purpose cleaner. It has an intense, sharp flavor and is a common ingredient used in cooking purposes.

One uses white vinegar in the kitchen in sauces, baking cakes, making pickles, and even making vegetables maintain a bright shade.

You can use it to clean rust from iron objects. 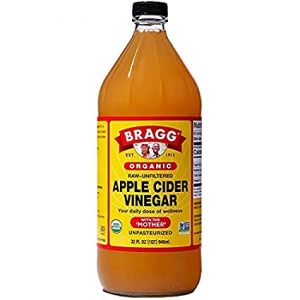 Apple cider vinegar has gained tremendous popularity lately because it has a wide variety of uses.

It is prepared from fermented apple juice, giving it an utterly unexpected flavor than other sorts of vinegar. We use it in recipes for meats, seafood, and even some salads.

It is additionally known for aiding digestion and improving gut health. We mostly consume it by mixing it with water. 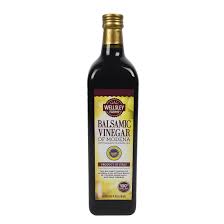 One prepares Balsamic vinegar from the juice squeezed out of grapes, and its quality gradually increases with its age.

While it is one of the most common types of vinegar available in the market, it is also expensive.

It is probably the best type of vinegar for food. It enhances the taste of salads and chicken when blended with olive oil, some tomatoes, and herbs. 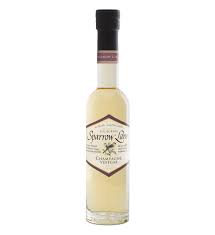 One prepares it from the champagne that has fermented.

It has the lightest flavor among all varieties of vinegar, which is both sour and sweet. It adds great flavor to meat and salads. 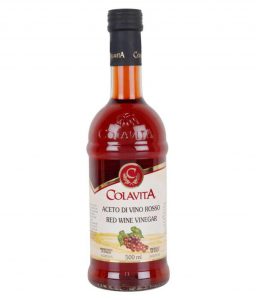 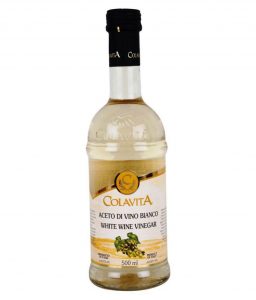 White wine vinegar is predictable from the name itself that one prepares this variety of vinegar from fermented white wine. It tastes milder than distilled white vinegar and apple cider vinegar.

It serves a few cooking purposes then also we generally use it in salad dressings, ketchup, and even marinades. 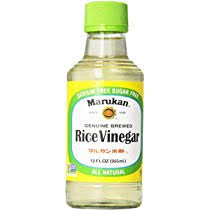 One prepares Rice vinegar from fermented rice wine. It has a sweet and delicate flavor and is less acidic contrasted with most varieties of vinegar.

Rice vinegar is available in clear to brown, red, and even black shades. We commonly use it in Asian recipes of sautéed food, salads, noodles, and whatnot. 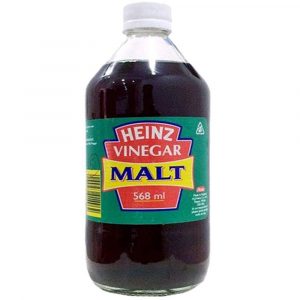 Most popularly used as an ingredient in the traditional recipes for fried fish and french fries, it is widely used in beans on toast and for making pickles. 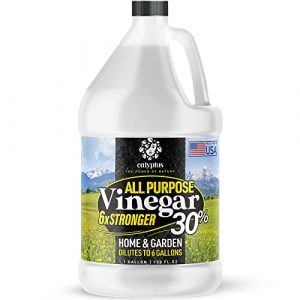 Cleaning vinegar is not a fit to intake by any means. It is dangerous for health. It is 6 percent acidic in nature.

You can use it to clean surfaces at home. 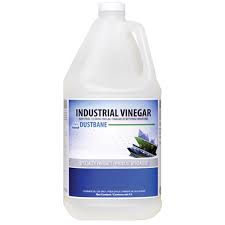 Industrial vinegar is used for industrial purposes and is hazardous to ingest.

It is usually 20 to 30 percent acidic in nature. We use it for several purposes like cleaning commercial buildings and destroying weeds.

Other uses of Vinegar

Here are nine unusual and eco-friendly uses of vinegar that you might not have thought of. So, let’s go through these unusual uses:

Did you know that by adding half a teaspoon of vinegar to a cup of water, you can wash your hair as well? Yes, your hair might smell bad for a while, but it’s good nonetheless.

1. You can also use a solution of water and white vinegar to wipe floors, fridges, and kitchen cabinets. However, ensure that the floor is not marble or granite. It removes the smell of food from the refrigerator.

2. If you want to remove sweat stains, spray vinegar with a spray bottle before washing clothes, and they will vanish.

3. To soften the clothes, add white vinegar to the machine before the last washing in the machine. It will also remove the soap particles.

4. To prevent the cut flowers from wilting, add a teaspoon of white vinegar to the water in the vase. The flowers will stay fresh for a long time.

5. While boiling the eggs, add some vinegar to the hot water. Due to this, the white portion of the egg will not spread and remain solid.

6. If you accidentally burn the food while cooking, keep three-fourth part of the white vinegar mixed with water in a bowl in the room. The smell will be gone.

9. Clean your clogged drains without the harmful chemicals that cause headaches. After pouring a three-fourth cup of baking soda into the drain, add half a cup of white vinegar; this will clear the drain.

In this article, we discussed the different types of vinegar and their uses. We also talked about some unusual use of vinegar, including the one where one uses it to remove rust from metallic objects.

While it is eco-friendly, it does not contaminate the environment like other cleaning products available in the market. The hazardous chemicals are not skin-friendly too.

A mixture of apple cider vinegar/white vinegar and salt can easily remove the rust from any metallic object, such as spoons and scissors.

However, submerge the object in a water and baking soda mixture after taking it out from the vinegar, to neutralize the acidity.