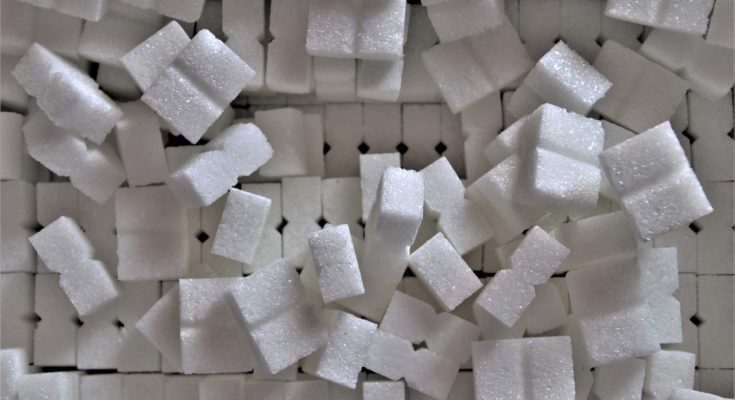 Sugar is a substance that is known for its sweetness. It is used in large varieties of food items like chocolates, cakes, etc. It gets easily dissolved in water and forms a sugar solution.

Sugar is an organic compound made up of 12 carbon atoms, 22 hydrogen atoms, and 11 oxygen atoms. The chemical formula of sugar is C12H22O11. It is also known by the term sucrose.

Sucrose, Maltose, and Lactose and are all compound sugars having a common formula C12H22O11.

In the United States, sucrose is the only substance that can be called sugar. Sugarcane is one of the main sources of sucrose.

Sugar molecules exhibit covalent bonding in its molecule. Carbon, Hydrogen, and Oxygen atoms are connected to each other through covalent bonds.

When sugar is added to water, It gets completely dissolved forming a sugar solution. The water molecules and sugar molecules both have hydroxyl groups (-OH). Therefore, their molecules get connected via hydrogen bonding.

Therefore, no exchange of electron among sugar molecules takes place. All electrons remain bound to their own molecule. In this way, no free ions are present in the sugar solution to conduct electricity.

In the case of the electrolytic solution, the electrolyte such as NaCl, KCl, etc has ionic bonds. When added to water, they readily dissociate free ions that are free to move across the solution and conducts electricity.

The electrolytes are actually charged whereas sugar molecules are neutral in nature. Below is the structure of the molecule of sugar (sucrose) C12H22O11. 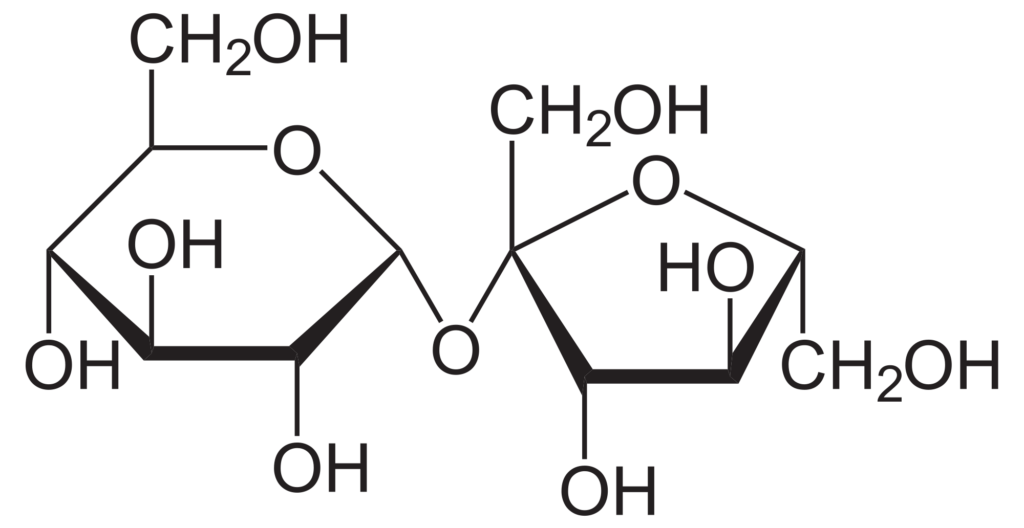 A chemical compound is formed by multiple atoms held by a chemical bond. The bond formed between two atoms is of two types; Ionic and covalent.

Ionic bond: this bond is formed when one atom stabilizes the other atom by giving its own electron.

Electron is nearer to the atom that requires the electron to get stable. This bond shares unequal charge distribution that generates polarity. Therefore, Ionic bonds are polar in nature.

This bond is formed due to the electrostatic force of attraction between oppositely charged atoms. Examples of compounds forming ionic bonds are NaCl, KCl, etc.

Covalent bond: In this bond, two atoms are bonded to each other by equal sharing of electrons by both of the atoms.

This bond has equal charge distribution over both of the atoms. The compounds held up through covalent bonds do not ionize in water.

The sugar (sucrose) having the chemical formula as C12H22O11 has atoms of hydrogen, carbon, and oxygen that are bonded to each other through covalent bonds.

If we apply an electric voltage across sugar crystal (solid) the electrons do not move across it because sugar molecule is neutral in nature.

And covalent bonds have equal charge distribution over both atoms. Therefore, the bond is non-polar in nature and as a result, the electron remains static and the sugar molecule acts as an insulator.

A non-electrolyte is a chemical substance that can dissolve in water without producing ions in it. An aqueous solution of a nonelectrolyte substance does not conduct electricity.

Why does salt conduct electricity?

Salt is an electrolyte and it consists of ions that are free to move across it. Common salt is NaCl (sodium chloride) and it is made up of Na+ and Cl- ions.

Sodium and chloride atoms are bonded by ionic bonds because of oppositely charged particles.

And NaCl solution is considered to be a good conductor of electricity due to a steady flow of Sodium ion (Na+) and Chloride ion (Cl-).

In high school chemistry labs, students also perform the experiment of electrolysis with the Salt solution. NaCl aqueous solution is a commonly used solution for electrolysis. This is because it is a good conductor of electricity.

The chemical formula of sugar (sucrose) is C12H22O11.
The molecular mass of sucrose is 342.30 g/mol.
The physical appearance of sugar is a white crystalline solid form.
The density of the sugar molecule is 1.587 g/cm3.
The melting point of sugar is calculated around 459 Kelvin or 185 Celcius.
It gets readily soluble in water (H2O).
The molecules of sugar are neutral in nature.

Unlike electrolytes like Sodium Chloride(NaCl), Potassium Chloride(KCl), Sugar molecules are neutral in nature. The exchange of electrons among the molecules of sugar do not occur.

On adding sugar in water, although sugar dissolves in water, the sugar molecules do not get ionize as they are held by covalent bonds. Therefore no free electrons are present that can conduct electricity.

Whereas in the case of electrolyte, they readily ionize in water as they are held by ionic bonds and dissociate free ions that conduct electricity.

Sugar is a neutral molecule therefore it is an insulator itself and also does not conduct electricity if added in water.

So guys, if you have any questions, you can ask in the comment section. We will reach out to you as soon as possible.