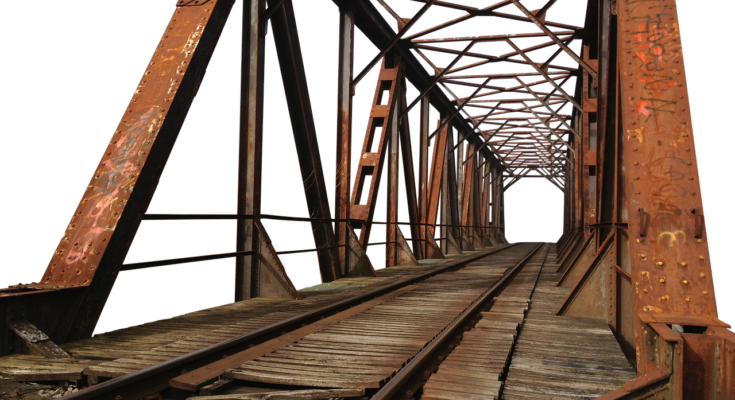 So, Does Stainless Steel Rust? No, stainless steel does rust. In the scarcity of chromium on the surface of the stainless steel, a layer of chromium oxide does not form making the outer area vulnerable to rusting and can turn the color to reddish-brown.

Though all other elements prevent rusting of stainless steel in one way or another, its nickel and molybdenum which comes after the chromium. You might have realized by now that averting rust formation is all about whether chromium is present near the surface or not. Also, at what percentage elements are present in the iron alloy.

The ideal percentage of the essential elements that prevent the formation of rust:

It is to be noted that the elements of stainless steel provide other abilities such as hardening, discoloring, scratch-free, malleability, ductility, and many others.

You might be surprised to know the fact that stainless steel is not completely stainless. It is a mere gimmick to increase sales.

Why stainless steel is not corrosive?

Stainless steel does not undergo corrosion when exposed to air and moisture. It is because chromium undergoes passivation through which it forms a thin layer of chromium oxide.

This layer forms when chromium reacts with the oxygen present in the air and the water. Additionally, chromium oxide prevents oxygen from associating further with the steel preventing it from spreading throughout the metal.

It might be interesting to know that a thin layer of chromium oxide is self-repairing in nature. It means, in case of its disruption, chromium again reacts with fresh oxygen molecules to fil the gap. This is the reason why stainless steel does not corrode easily.

Once the chromium oxide layer on the surface of the stainless steel is disrupted, a normal chemical reaction of rusting on steel takes place.

Below is the chemical reaction of the rusting process. 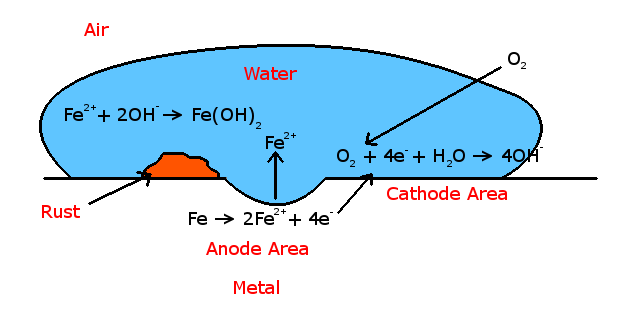 By this time, you might be thinking why there are no single ideal set percentages of all elements for the stainless steel?

Having a predetermined number for chromium, nickel, and molybdenum can help with preventing rust formation and will act as a single guideline throughout the globe? No, this is not how it works.

The aforementioned image shows all major reasons because of which stainless steel undergoes corrosion. 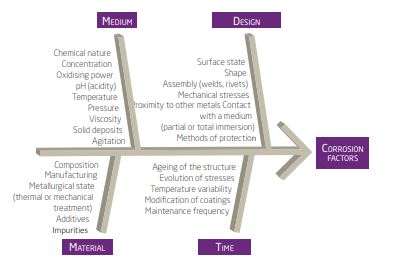 Some of the real-life examples of rusting of stainless steel can be:

Think about a situation where you might have left a paper clip in the damp sink of your kitchen. If left overnight, the next day you will find a slight discoloration on the sink, in the shape similar to that of the paper clip. Here, the paper clip prohibited the formation of chromium oxide and rusting initiated instantly.

Now, think about other situations for the aforementioned everyday examples. 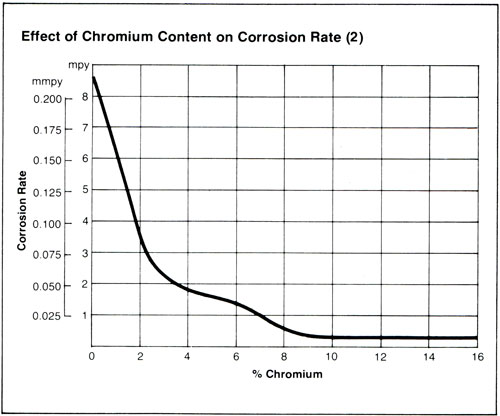 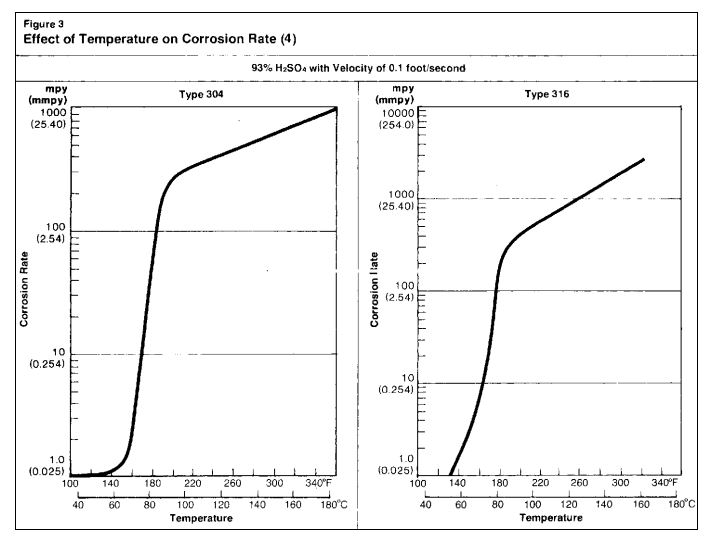 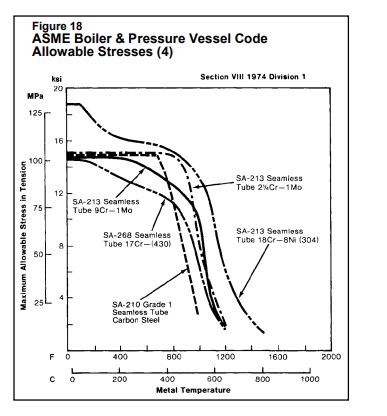 From the graph, it can be seen that higher temperature and lower pressure or vice versa conditions can be handled by the stainless steel without undergoing corrosion. Any alteration to this with an increase in time will lead to the formation of rust. 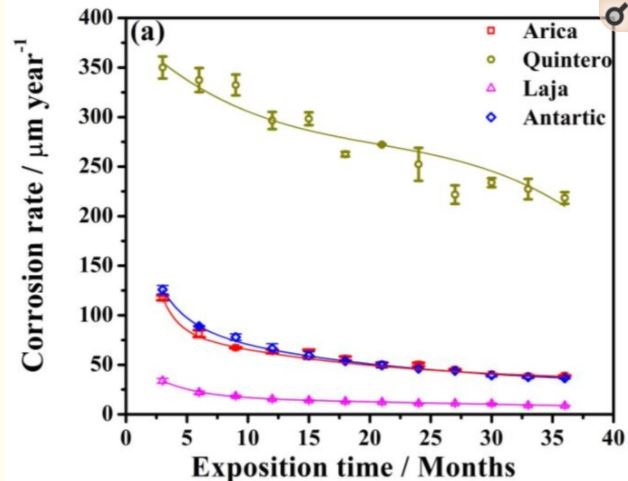 The four selected geographical locations in the graph have different geographical conditions. Quintero has a temperate climate and Laja has a dry and rural environment. Whereas, Arica and Antarctic have cold and marine environment.

From the graph, it can be seen that Quintero having a temperate environment has a maximum corrosion rate.

Both Arica and Antarctic have similar corrosion rates and have values quite closer to one another. Lastly, Laja having a dry and rural environment has the least amount of corrosion rate values.

Stainless steel is useful for different purposes for which elements are added in different compositions as per the requirement. Some need stainless steel to be weldable while others need solid and hard metal. The elements of stainless steel not only prevent rusting but contributes to other specialties as well.

Due to this reason, there are five main types of stainless steel because of its crystalline structure.

Let’s discuss all one by one!

Austenitic stainless steel is the most common type and has high percentages of Nickel, Nitrogen, and Manganese.

They are highly weldable, ductile, and does not harden by any heat treatment. Some of the examples can be household utensils, spring, or knife.

Ferritic stainless steel has a high percentage of chromium and less carbon (lesser than 0.10 percent). They are not weldable and lack toughness. They do not harden by any heat treatment.

As they have higher concentrations of chromium and molybdenum, they can be used under harsh conditions like seawater. Also, they do not corrode easily. Making nut and bold out of this metal is the best option.

Due to the high percentage of carbon, they are used where high strength and average corrosion resistance is required.

They have low weldability because of which are used in wear-resistant equipment, turbines, aerospace applications, hydroelectric power plants, and others.

Due to this, it has approximately twice yield strength than the austenitic steel and has better resistance to corrosion cracking.

The duplex stainless steel is the most suitable choice for paper and pulp industry as well as the oil and gas industry.

This steel precipitates at very high temperatures which form small particles in the matrix of the steel. These minute particles impart strength and a good tolerance power to heat.

Due to this, this steel can be used to form intricate shapes as they undergo minimal to zero distortion before reaching the final treatment. It is a superalloy that is used in jet engines, turbo parts, gas turbines, and others.

One main reason of such surge in production is, both the North American Federal Trade Agreement (NAFTA) states and the Commonwealth of Independent States (CIS) have undergone upheaval both in production and consumption of the stainless steel.

Out of these numbers, the USA has a small footprint when it comes to the production of stainless steel.

The production of stainless steel by the USA has reached 2.8 million metric tons by 2018, which was 2.2 in 2010. It can be seen that within 8 years of span, not much increment in production has occurred.

Who is the largest producer of stainless steel in the USA?
It is Nucor Corporation as an issue by the American Metal Market.

Does stainless have any degrading impact on human health?
Welding and cooking are two major sectors that are discussed rigorously. It has been criticized that welding stainless steel produces carcinogenic fumes that can lead to cancer. These fumes are categorized as Group 1 carcinogens by Cancer Council Australia.

For cooking, it has been proven scientifically that stainless steel makes food highly acidic due to the elements like chromium and nickel.

Eating such food for a longer time can introduce carcinogens and oncogenes in the body and reduces the overall immunity of the body.

Stainless steel being an iron alloy does rust and corrode. It is all about the percentages of chromium, nickel, molybdenum at which they are mixed in the alloy. The rusting starts when the surface of the metal comes in contact with the air and moisture.

So, if a large percentage of chromium is present near the surface in mixture with nickel and molybdenum, rusting of the metal can be prevented.

It is said that oxalic acid removes rust on the stainless steel but don’t you think prevention is always better than cure. Next time, buy stainless steel as per your need.

So guys, if you have any doubt regarding the rusting of stainless steel. You can ask them in the comment section. We will reach out to you quickly.