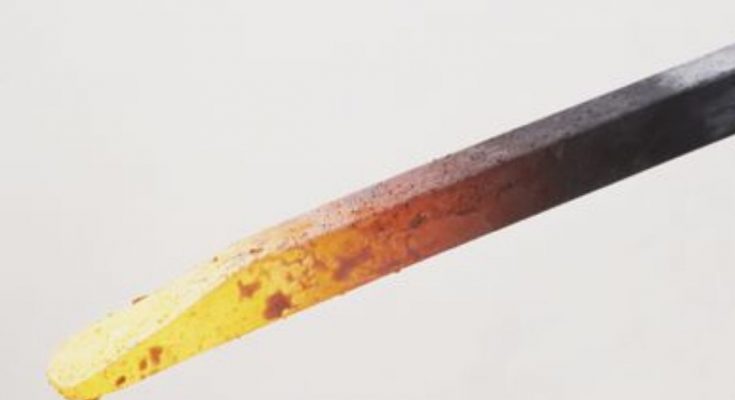 Metals are lustrous, malleable, and ductile elements that are good conductors of heat and electricity. The different atoms of a metal are bonded through metallic bonding that is characterized by the presence of delocalized electrons present in the free space around atoms.

So, does metal expand when heated? Yes, all metals expand when heated. This property of metals is known as thermal expansion and it occurs due to the increased kinetic energy of the atoms. The amplified movement of atoms causes them to acquire more space, hence, resulting in the expansion of the metal surface. However, the temperatures at which they expand as well as the extent of expansion are different for different metals.

Let us study it in further subheadings in more detail.

Why Does Metal Expand When Heated?

We already know that the atoms inside a substance keep moving at constant speeds. The continuously occurring vibration movement depends upon the energy of these atoms.

This indicates that the atoms would gain speed with the rise in energy while the atomic speed depletes in the absence of an efficient energy source.

In the case of metals, the supply of heat results in an increase in the kinetic energy of atoms which start vibrating at higher speeds.

The vigorous vibration movements cause the atoms to take up more space than earlier which causes an overall increase in the surface area of metals and the metal is said to have expanded.

This property of metals is made use of in the construction of a number of devices such as fire alarms, in which a bimetallic strip made of brass and iron is used to raise the alarm.

Actually, brass expands at a lower temperature in comparison to iron, therefore, in the case of fire the bimetallic strip bends to connect with the neighboring screw and complete the circuit. The bell rings as soon as the circuit completes.

Similarly, it is used to break the circuit in the case of a circuit breaker device.

What is Thermal Expansion and why does it occur?

Before describing thermal expansion, let me ask you a few questions. Have you ever thought about what would happen if you boil water in a closed glass container? Or, have you ever tried opening a metal jar after keeping it in hot water?

In the first case, the container breaks and in the second case, the metal jar easily opens up. Why do you think this happened?

This occurs due to the change in inter-atomic distance. As the magnitude of bonding forces in different substances vary, their rate of thermal expansion also differs.

The thermal expansion of a substance is rather more visible when studied in different phases of matter.

On the other hand, liquids offer a greater degree of expansion in comparison to solids due to more availability of space while in gases the expansion is far-reaching owing to least or no inter-atomic forces acting to hold the atoms together. 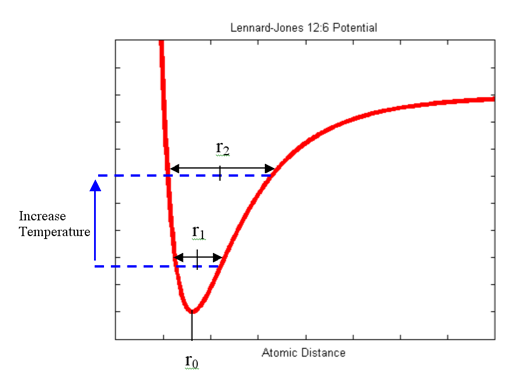 Therefore, the effects of temperature change are more pronounced in gases in comparison to solids and liquids.

Some substances such as water even change their physical forms with the change in temperature viz. solid at 0 °C, liquid at room temperature, and gas at a temperature above 100 °C.

The fractional change in the length, volume, or surface-area of an object in response to per unit rise in temperature is known as the coefficient of thermal expansion. It is measured at constant pressure.

The value of the thermal coefficient is specific to a particular material and depends upon its physical properties. A higher value of thermal expansion indicates that the substance would expand to a greater extent.

The Thermal expansion is further divided into three categories:

When only the length of the object changes in response to temperature.

Here, change in length (ΔL) is directly proportional to change in temperature (ΔT) as well as the original length (L) and is given by the equation:

When the surface area changes in response to a rise in temperature. 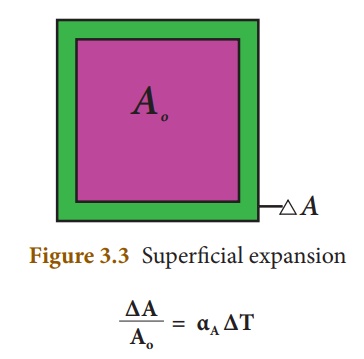 When the volume changes in response to temperature. Here, change in volume (ΔV) is directly proportional to change in temperature (ΔT) and original volume (V) and is given by the equation:

In the above-mentioned equations the α, β, and γ symbolize coefficients of linear, superficial, and cubical expansion, respectively. 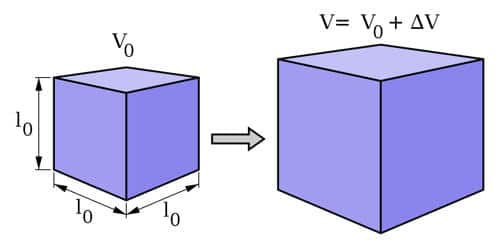 Which metal expands the most when heated?

As discussed in the previous section the higher the value of the coefficient of thermal expansion, the greater is the expansion capacity of the substance.

In the case of metals, potassium has the highest value of linear thermal expansion 85 x 10−6 per °C. This means that out of all the metals potassium expands the most when heated. 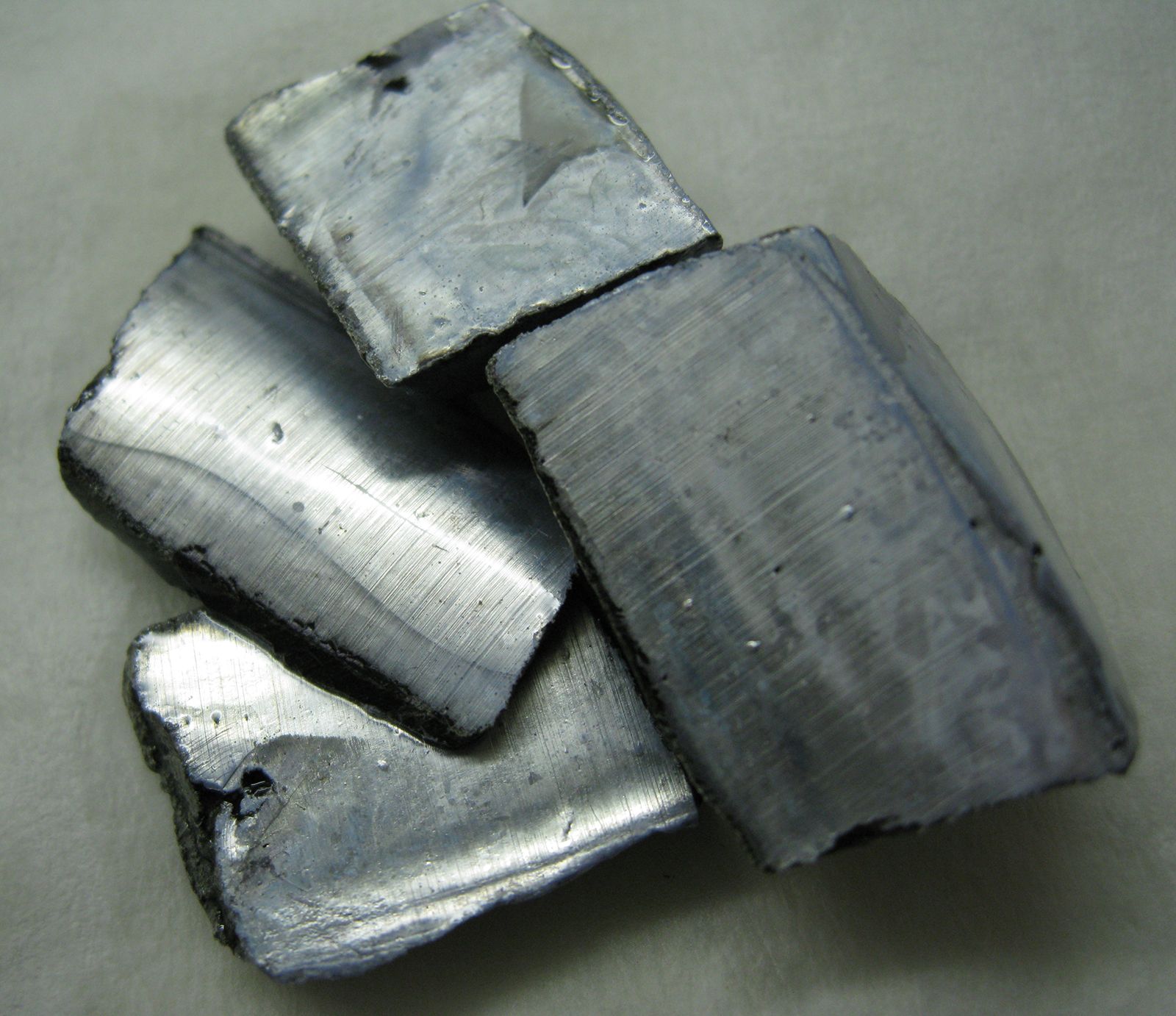 Other metals such as sodium, plutonium, and zinc also have a high coefficient of linear expansion.

On the other hand, the metal known to expand least under the influence of heat is iron due to its low value of the coefficient of thermal expansion.

Does metal contract when cold?

The answer is yes. Similar to thermal expansion metals also undergo contraction when exposed to lower temperatures. It is assumed that above 0°C the atoms of any material are in continuous vibration motion.

However, as the temperature drops down below 0°C the atoms become stable and remain at their positions. This results in acquiring lesser space by the atoms due to which they seem to contract.

It is actually the kinetic energy of atoms due to which the expansion or contraction occurs.

What does thermal expansion depend upon?

Answer: Sags in the electrical lines, cracks appearing on the road in summers, bursting of tires on road, etc.

Why are kitchen wares made of pyrex glass?

Answer: It is because the coefficient of thermal expansion for pyrex glass is quite low. Therefore, it does not break when heated.

Why are gaps left in between the railway tracks?

Answer: It is due to the property of thermal expansion of metals due to which they expand in the summer. If there are no gaps the metal strips would expand and buckle no space will be left for the train wheels. 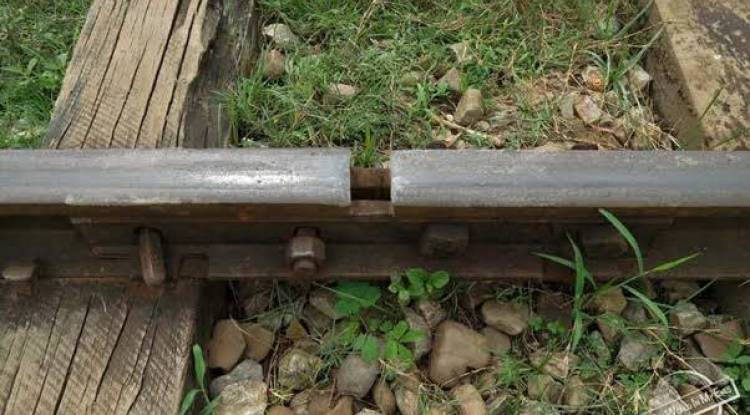 Why are rubbers attached with the metallic window frames?

Answer: The metallic window frames tend to expand in summer due to thermal expansion. The rubber attached with it serves as spacers due to which the windows can be opened and closed easily even in summers.

Do the joints in the road bridges have anything to do with thermal expansion?

Answer: Yes, the joints are given in the road bridges so that when the concrete expands during the hot season it would not result in the cracking of the bridges.

Metals expand on heating due to the increase in kinetic energy of their atoms that vibrate at higher speeds and acquire more space.

The property of metals to expand under the influence of heat is known as thermal expansion. As the strength of inter-atomic forces differs for different metals, hence, the rate of thermal expansion also differs.

Potassium has the highest value for the coefficient of thermal expansion.

The metals also contract as the temperatures are dropped below 0°C.

19 Metals that are non-magnetic