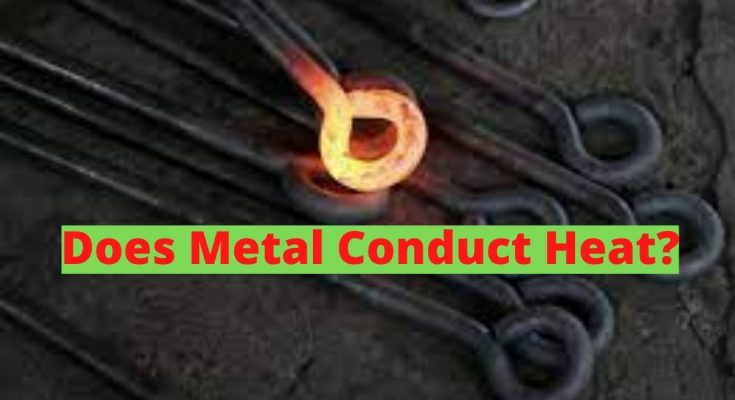 Metals are a class of substances that are known to be highly ductile and malleable. Around three-quarters of all discovered chemical elements are metals. Aluminum, sodium, calcium, iron, potassium, and magnesium are found in abundance within the Earth’s crust.

The majority of metals are found in ores. But metals like silver, platinum, gold, and copper are available in the free state. This is because these elements don’t readily react with other chemical elements.

In this article, we’ll address all questions related to the thermal conduction of a metal.

So, does metal conduct heat? Yes. Metals do conduct heat. In fact, they’re known as excellent conductors of heat. This is because the electrons present within the metal structure move around freely. These electrons facilitate the transportation of heat from one end to the other.

Most metals have an equal density of electrons. So, the factor that decides how well the metal will conduct heat is the ease at which the electrons can move around.

In pure metals like copper, the electrons surpass hundreds of atoms before colliding with one that leads to a change in its direction.

While in alloys, the electrons pass through only a few atoms before bumping into one and changing its direction.

Why Does Metal Conduct Heat?

Delocalized electrons can transfer energy at a faster rate. The electrons move freely and conduct heat. Thermal conduction takes place when a metal is heated.

Heating results in the electrons present within the metal structure acquiring energy and vibrating.

These energized electrons bump with neighboring electrons and transfer their energy to them. This energy transfer continues till the heat is transferred from the hot end to the cold one.

How is Heat Transferred Through a Metal?

Heat can be transferred from one place to another via three different methods: radiation, convection, and conduction.

Heat conduction is the transfer of heat between substances that are in direct contact with each other. It requires matter as a medium.

Thermal conduction through a metal occurs when the metal is heated. Heating supplies external energy to the metal and causes electrons to move swiftly and collide with their neighboring electrons.

This results in thermal transfer through a metal. The better the conductor, the faster the heat will be transferred.

What factors determine the heat conductivity of a material?

Factors that determine the heat conductivity of material are as follows:

Metals have the highest number of free electrons and a tightly packed crystal lattice structure.

Purity of the Material

Pure materials have better thermal conductivity than alloyed ones. This is because of metal alloying that results in the addition of impurities within the metal structure.

This causes a decrease in its thermal conductivity. For instance, the thermal conduction of pure copper is 385 W/mK. While that of copper alloyed with arsenic is 142 W/mK.

The thermal conductivity of metal can be adversely affected if it goes through forging, bending, and drawing into thin wires.

Heat treatment can also harness the ability of a material to conduct heat.

In solids, at extremely high temperatures, the crystal lattice vibration increases, and the movement of free electrons decreases.

Therefore, the thermal conductivity of metal gets hampered when temperatures are increased tremendously.

In liquids, at high temperatures, the thermal conductivity decreases. This is because the heat conductivity of a liquid is directly proportional to its density.

The density of a liquid decreases at high temperatures. Hence, its thermal conductivity also decreases.

Materials that have a regular crystalline structure have better heat conduction than materials in their amorphous form.

What factors determine the rate of heat conduction?

The rate of heat conduction depends on four factors:

A temperature gradient decides the direction and rate of temperature changes within a system. It is a physical quantity. 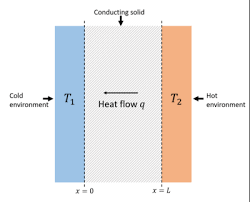 Cross-Section of the Material

The size of the material also plays a pivotal role in deciding the rate of thermal conduction.

The path length is the distance between two points of a system.

The shorter the distance, the faster will be the conduction and the minimum amount of heat will be lost.

Physical Properties of the Material

Metals have sufficient electrons to carry out heat transfer. But non-metals don’t have free electrons. Hence, they’re known as poor conductors of heat or insulators.

Alkali metals are chemical elements that are present in the Group 1 of the periodic table.

They consist of lithium, sodium, potassium, rubidium, cesium, and francium. These elements form alkalis (strong bases) when reacted with water. This gives the group its name.

Alkali metals are excellent conductors of heat since they have free electrons that assist in heat conduction from one end to another.

Which metal is the best conductor of heat?

Silver is an excellent conductor of heat. However, for commercial purposes, copper is used for thermal conductivity. This is because copper works as an affordable alternative to silver.

The thermal conductivity of silver is 419 W/mK while that of copper is 386 W/mK.

Non-metals are chemical elements that aren’t ductile and malleable. They don’t have a regular crystal structure and lack luster. Generally, all non-metals are poor conductors of heat and are called insulators.

But graphite, a carbon source, is an excellent conductor of heat. Hence it is used in the production of iron wherein graphite is exposed to high temperatures.

Hence, they assay the role of insulators. For instance, the thermal conductivity of silver is 419 W/mK, while that of plastic is 0.33 W/mK.

Wood doesn’t have a rigid structure like metal. It has a porous body that results in heat loss during heat transfer from one end to another.

Glass doesn’t have an ordered crystalline structure. Also, it doesn’t have free electrons unlike metals to facilitate thermal conduction.

The thermal conductivity of glass is 0.130 W/mK. Glass acts as an insulator. Hence, metals conduct heat better than glass.

Which metal is a poor conductor of heat?

Lead is a metal but it’s a poor conductor of heat. Its thermal conductivity is 35 W/mK.

When does metal conduct heat?

Metal conducts heat whenever it is heated. Heating provides it with the energy required to increase the energy of the electrons and permit them to vibrate and collide with their neighboring electrons.

This collision causes heat transfer among them and heat is successfully transferred from one place to another.

Do all metals conduct heat?

No, all metals don’t conduct heat. Metals like bismuth, stainless steel, chromium, titanium, and lead are poor conductors of heat.

Does Metal Expand When Heated

Do Asteroids Orbit the Sun

How Ceramics are Made

Metals are good conductors of heat by the virtue of free electron availability. They have a regular structure that permits the flow of electrons from one end to another. Metals conduct heat when heated from a point of higher temperature to a point of lower temperature till thermal equilibrium is obtained.

Silver and copper are excellent conductors of heat while lead, chromium, bismuth, titanium, and stainless steel are poor conductors of heat. Non-metals don’t have a regular structure or free electrons. Hence, they’re termed insulators. Graphite is an exception here.