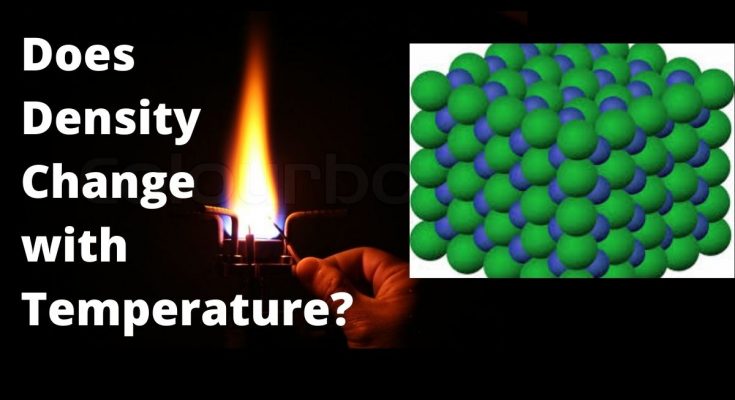 In this article, we will study if there is any change in the density of a substance with temperature or not.

As the temperature of a substance increases it results in an increase in its volume due to the increased kinetic energy of its molecules that begin to move at higher speeds owing to which there are more frequent collisions between these molecules making them move away from each other.

This instance is especially true when a substance is present in the liquid and gaseous form of matter due to more availability of space allowing the molecules to expand the volume of the substance, and, thus, decreasing its density.

However, in the case of solids, the molecules are very closely packed and do not have enough space for their movement.

Contents show
What is Density?
Relation between Temperature and Density for different states of matter
Why Does Temperature Affect Density?
What is Relative Density
Graph of Density Vs. Temperature
Archimedes Principle of Density
Conclusion 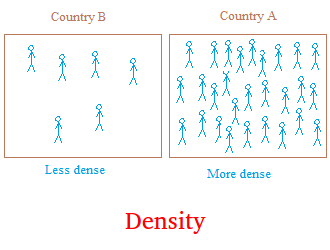 Density is the measure of the number of molecules of a substance present in a specific volume.

It is the characteristic property of a substance and as the name indicates it gauges how dense an object is or how compactly are the molecules of a substance arranged in space.

Actually, it is the density of a substance that decides whether it will float or sink or rise high in the atmosphere. It is given by the formula mass by volume and is written as under:

This means that a denser object will always have a smaller volume in comparison to an object with a lower density.

Density is expressed in gram per centimeter cube or kilogram per cubic meter.

Relation between Temperature and Density for different states of matter

As discussed earlier the change in temperature has different effects on a substance when applied in different phases viz. solid, liquid or gas.

Therefore, there are specific formulas for expressing the relation between the temperature and density of the substance in different phases.

As the change in temperature has minimal effect on solids, there is no specific formula.

Also, based on the above formulas volume of the substance is calculated and then density is measured by dividing the mass of a substance by its density.

Why Does Temperature Affect Density?

The temperature of a substance is the measure of its heat i.e. it is the property used to explain how hot or cold a substance is using a number of scales viz. Fahrenheit, Kelvin, Celsius, etc.

It is an illustration of the thermal energy of a substance. Usually, the temperature of a substance is inversely proportional to its density, and the change in any of these properties is reflected in the other.

Usually, solids are the densest substances as they have a closely packed structure with more number of atoms or molecules in a specific volume of substance while gases are least dense as the molecules have enough space for their movement.

The reason why temperature affects density is that increase in temperature provides heat to the system which is a form of energy.

As this heat energy is absorbed by the atoms or molecules of a substance it changes into kinetic energy due to which they start vibrating at higher speeds.

This increase in speed causes more collisions than usual due to which they have pushed apart from each other.

This movement of atoms and molecules away from each other causes the expansion of the substance thus increasing its volume. As the volume of a substance is inversely proportional to its density, an increase in temperature results in a decrease in density.

What is Relative Density

Relative density is also known as specific gravity. It is actually the density of a substance relative to another substance that is being used as reference material.

It is used to check which of the given substances is denser.

It is a dimensionless quantity and is given by the formula: 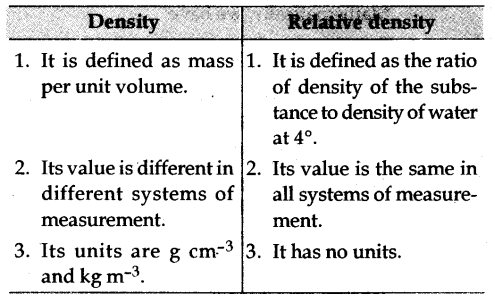 As density is directly affected by a change in temperature, therefore, it is necessary that the density of both substances is measured at the same temperature while calculating the relative density.

Mostly water is taken as the reference material to make the calculations easier and also because it is readily available.

Graph of Density Vs. Temperature

The density of a substance decreases as the temperature increases and vice versa. This indicates that these two physical properties of a substance are inversely related to each other.

When a density vs. temperature graph is drawn is relation becomes rather more clear.

Let us look at the graph for density of air at 1 atm pressure as a function of temperature.

Now, to understand the relationship between density and temperature in the case of liquids let us have a look at the graph between the density of water at 1 atm pressure as a function of temperature.

It is named after the Greek mathematician Archimedes of Syracuse who first used and described it.

As per the Archimedes principle when an object is immersed in a fluid the weight of the fluid displaced is equal to the buoyant force exerted by the fluid on that object.

The mass of the substance submerged appears lower than its actual mass.

The following formula is used for determining density through Archimedes Principle:

In this equation water is used instead of any other fluid as the density of water is 1 gm/cm3 which makes the calculations easier. 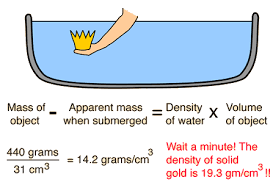 The density of a substance is inversely related to its temperature i.e. it decreases with the increase in temperature.

The increase in the volume of a substance resulting in a decrease of its density due to the rise in temperature is most prominent in gases enough space for movement of atoms and molecules, while it is almost negligible in solids due to closely packed structure.

As the temperature of a substance increases it provides energy to its atoms and molecules that cause them to vibrate at faster rates than under normal conditions. These vibration movements cause more collisions between these particles due to which they have pushed away from each other in space. This means that now fewer molecules are present in a given space than earlier indicating a decrease in density.