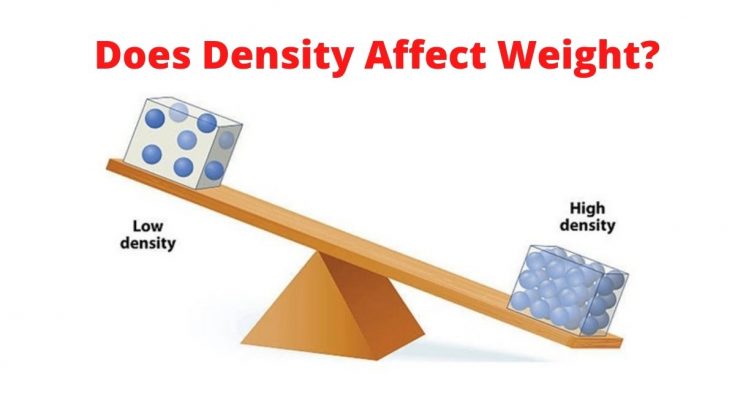 Hola folks! Here we are with another interesting topic for all of you science lovers.

Playing with balloons is one of the fondest memories of all of our childhood.

So tell me, if you fill a balloon with water and another balloon with air and throw them both in water, what would happen?

So, why exactly did this happen? Let’s find out….

In this article, I will focus on density, weight, mass, and volume. I will also cover their co-relation with each other. So, Stay connected.

Contents show
What are Density and Weight?
What does Less Dense Mean?
Does More Density Mean More Weight?
How Does Density Impact Weight?
Relation of Density with Temperature and Pressure
• Temperature
• Pressure
FAQs
Conclusion

What are Density and Weight?

Density is the measure of mass contained per unit volume of a material. It is denoted by the unit Kg/m3 or g/mm3.

The density of particular material remains the same, whatever be its shape or size. The formula for density is given below:

Therefore, if the mass of an object is M and its height, length, and width measure L cm each, then the density of that object is given by M/L3.

For example, the weight of a substance would be more on the earth in comparison to the moon owing to the lower gravitation constant of the moon.

For a better understanding of both these concepts let us look at the diagrams below: 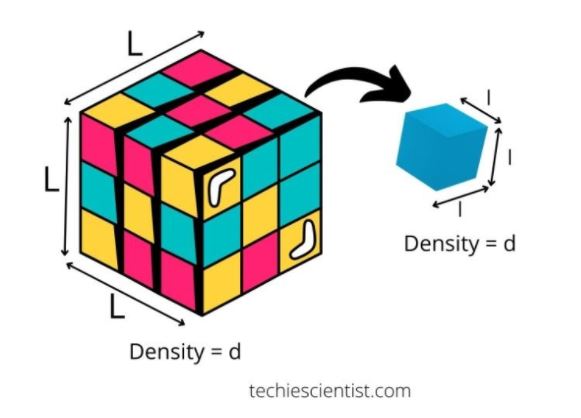 In the above picture, the density of the Rubik’s cube is the same as the density of one of its cubes separately, irrespective of the difference in size as the ratio of mass to volume remains constant.

However, the weight of the Rubik’s cube would definitely be more than the weight of its one small cube piece measured separately.

Now, look at the picture given below: 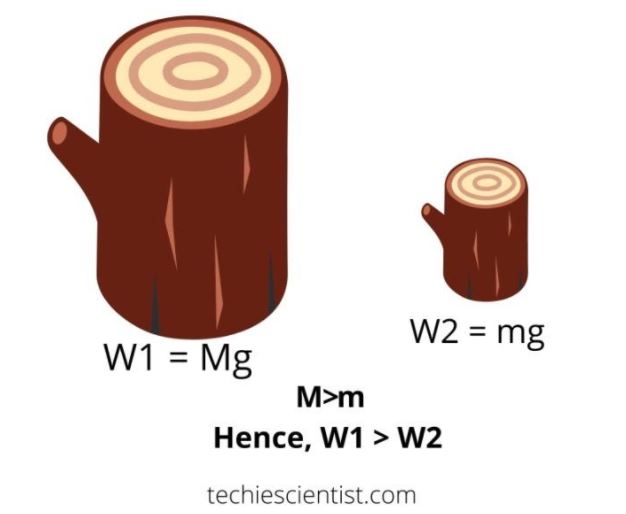 The following table differentiates between density and weight elaborately.

What does Less Dense Mean?

To understand this look at the following pictures: 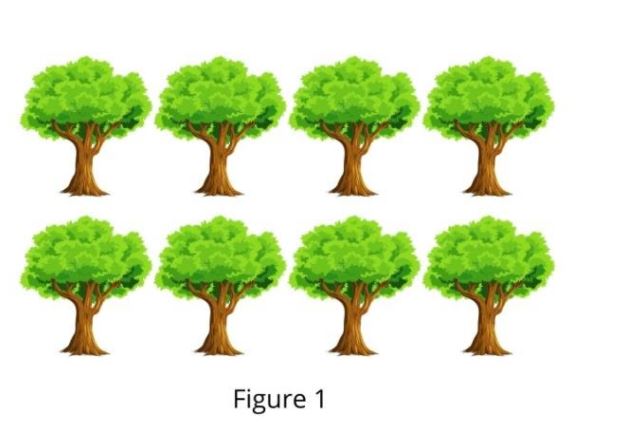 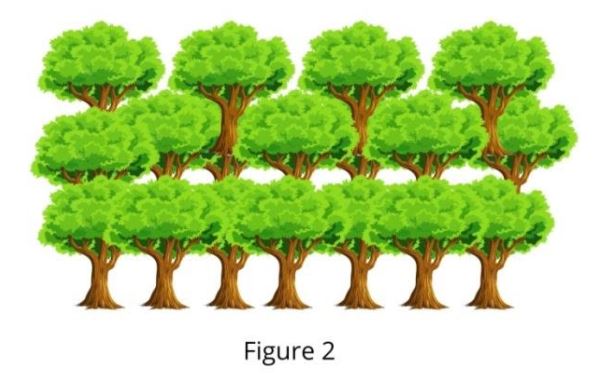 Out of Figure 1 and Figure 2 given above which one has more density of tree?

Obviously, it is Figure 2, as it has more trees in the same area. Hence, the forest shown in Figure 2 is denser, while the forest in Figure 1 is less dense.

Similarly, in terms of matter, if a substance contains more molecules or atoms in the same capacity then it is denser while the other substance will be less dense. You can compare the atoms or molecules to the trees given in the above pictures. More trees mean more density.

Now, look at the pictures below and tell me if the red and blue balls symbolize atoms then, which of the following substance is less dense? 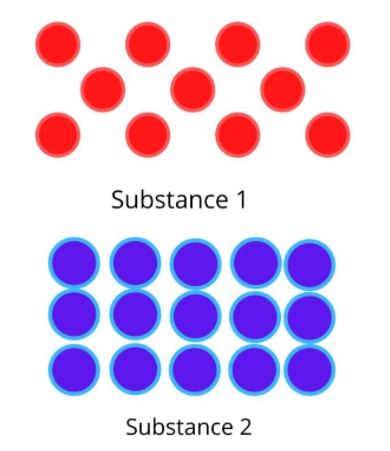 You are right. Substance 2 is denser than substance 1.

Let’s take an example, if you have a rock in hand and a big water body in front of you which one do you think has more mass?

You know the answer, it is the water body. It is way too bigger than the rock but, it also occupies much more space. So, what would happen if you throw that stone in water? Obviously, it would sink.

But, why did this happen? After all the big water body has a lot more weight than the small stone in your hand. It is because the density of stone is way more than the water as the large mass of water is scattered in large volumes.

How Does Density Impact Weight?

Density is the measure of how tightly the molecules or atoms are packed in an object. The closer the molecules are arranged or larger numbers of molecules indicate higher density.

Hence, solids are the densest of all the states of matter while gases are the least dense of all.

As discussed in the earlier sections, the weight of an object is directly proportional to its mass indicating that higher the mass of an object higher is its weight.

Therefore, even if the mass of an object is high, it might have a lower density owing to a larger volume.

Drawing the relation between weight and density:

Putting these values in one equation, W/g = DV

Therefore, Density and Weight are directly proportional to each other. But, as density is also inversely proportional to volume, the density of an object would increase in the same proportion as weight till its volume remains constant.

Check out the video attached explaining the density.

Relation of Density with Temperature and Pressure

The two major factors that affect the density are:

As the number of collisions increases the particles get pushed away from each other, and hence, the density of the object decreases.

Therefore, density is inversely proportional to temperature. I have also written a specific article on it.

Check out Does Density changes with temperature.

The density variation with change in temperature for water is shown in the graph below: 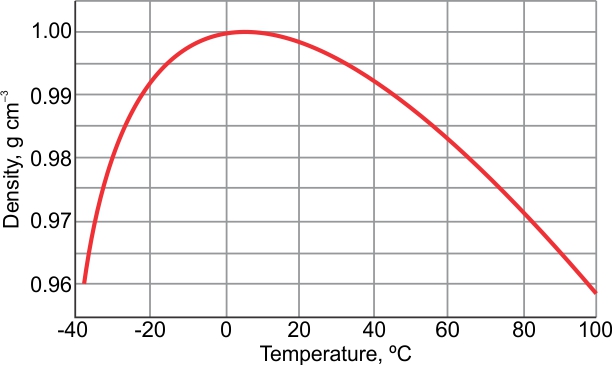 As per the graph, the maximum density of water is reached at 0°C when it is in the form of ice. Further, as the temperature keeps increasing, the density keeps declining.

Unlike temperature, pressure is directly proportional to density. As the pressure increases the particles inside a substance get pushed towards each other.

Therefore, the volume keeps decreasing, and ultimately, more particles are accommodated in lesser space. This means that the density of the substance increases with the pressure.

The pressure versus Density graph is given below:

Question: Does the shape of an object affect its density?

Question: Does density depends upon the amount or size of an object?

Answer: No. Density is an intensive property which means it is unaffected by any change in the size or amount of an object.

Is CO2 Heavier than Air

The density of an object is directly proportional to its weight provided that the volume of the object remains constant.

Density is measured using the formula, D = M/V, where, M is the mass of the object and V is the volume.

The weight of an object is measured by the formula, W = Mg, where M is the mass of the object, and g is the acceleration due to gravity.