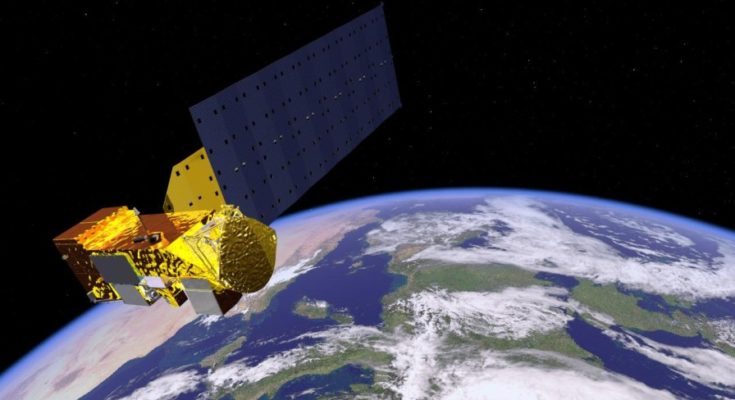 Satellites constantly revolve around the Earth at a distance of 500 to 40,000 km above the surface. Many are visible from the Earth and astronomers invest their time in viewing them using telescopes for space exploration and data collection.

Do satellites blink? Satellites do not have their own light. They have metal surfaces that reflect the sunlight falling on them. This occurs in intervals and one can observe this when the satellites pass overhead and the light reflected from them appears to our naked eyes as “flare” or “glint”. The satellite’s metal extensions reflect constant light for a few seconds and sometimes for a few minutes and they do not blink.

Even in the dark night sky, the satellites shine because they are far above us and the sunlight is always incident on them. Satellites while taking a round around the Earth, reflect light varying in intensity of brightness with time.

This happens because the observer sees different angles of the satellite as it rotates. Slowly, the satellite flies into the Earth’s shadow and disappears from the view.

Contents show
Satellite Glint
Controlled satellites
Uncontrolled/ tumbling satellites
Parts of a satellite
Satellite observation and studies
Do satellites have a light?
Can you see the satellites at night?
Do satellites blink red and blue?
Satellite launching and objective
International Space Station (ISS) 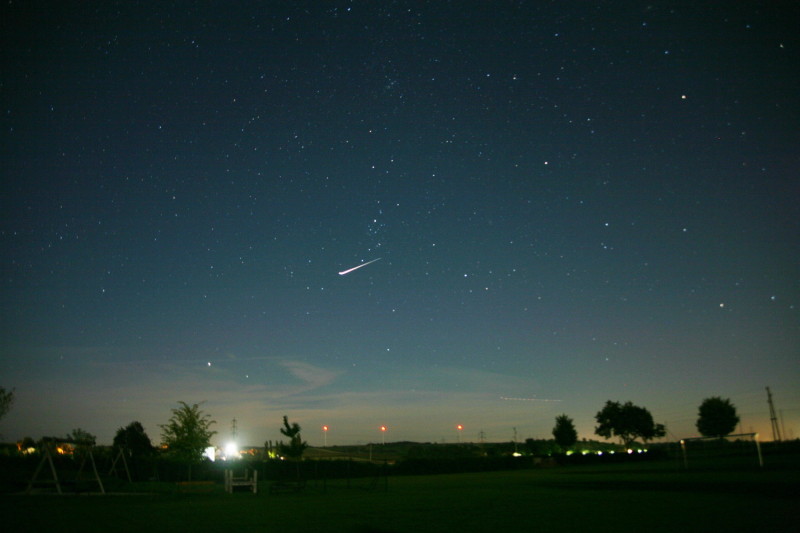 Satellite glint or satellite flare is the bright light reflected by the satellite that appears for a few seconds to the naked eye. This occurs as a result of the sunlight falling on the antennas, SAR and solar panels which in turn reflect the light towards the earth.

The orientation of these satellites can be monitored and controlled. Therefore, the time and place of their flares can be predicted. The precise time of the flare, location in the sky, light intensity and the time duration can be predicted.

There are two types of controlled satellites – Iridium and non-iridium satellites.

Iridium satellites: This satellite has three antennas that are positioned at angles of 120° and 40°. The antenna on the anterior points to the direction in which the satellite is moving. Some flares from these satellites are bright enough to be detected in the sky during the daytime. Sometimes, flares occur from the surface of the solar panels.

Non-iridium satellites: These satellites cause to reflect high-intensity light and produce relatively high magnitude flares. Astronomers have reported the duration of these flares to last longer.

These satellites are difficult to predict and the exact time and place of a flare cannot be forecasted. The trajectory of its pass can be indicated along which it can flare up at any point.

Parts of a satellite

Satellites differ in their models, parts, and purpose. Most satellites have two common components- an antenna and a power system. The antenna system operates by sending and receiving the information.

The power source, on the other hand, is basically a solar panel or a cell that generates electricity by converting solar energy into electrical energy.

Satellites are made using four essential parts namely a power source, an antenna, payload (camera or particle detector) and a controller ( to control its activity).

Satellites are observed and flash periods are measured by astronomers to study the satellite’s activity and movement. The time interval between two consecutive flashes is recorded. The flashes occur as a result of two types of reflections- diffuse and specular reflection.

Satellite observations offer real-time data on various factors affecting the Earth. The observations are recorded and data assimilation is carried out to forecast the conditions prevailing on the Earth’s surface and atmosphere.

The study of these data allows the researchers to examine the climatic, environmental and geographical parameters of the Earth.

Many satellites have cameras and scientific sensors that collect data on Earth’s land, water and air. They also gather information about other planets, the solar system, and the universe.

Do satellites have a light?

Satellites do not have lights of their own. The source of light and energy for the satellite is the sun. Satellites differ in their models, parts, and purpose.

Most satellites have two common components- an antenna and a power system. The antenna system operates by sending and receiving the information.

The power source, on the other hand, is basically a solar panel or a cell that generates electricity by converting solar energy into electrical energy.

Satellites are built using four essential parts namely a power source, an antenna, payload (camera or particle detector) and a controller ( to control its activity).

Can you see the satellites at night?

As mentioned earlier, satellites can be seen more distinctly in a clear night sky. This is because, with the dark black sky as background, the satellite glares can be easily detected. One can record the exact time and duration of the flare at the night time.

You can clearly distinguish satellites from other objects in the sky. Stars appear to twinkle and aircraft produce a light that glows intermittently. Whereas satellite reflects a constant bright light that glows for a few seconds and then completely fades away into the sky.

These satellites, when observed at night, can appear to glow with high intensity of brightness blinding us for a few seconds.

Do satellites blink red and blue?

Satellites glow and do not flicker, blink or twinkle. The twinkling of objects in the sky is a result of atmospheric turbulence.

Satellites can not possibly glow red and blue since the sunlight that falls on them is a bright white light. The same white light from the sun gets reflected towards the Earth by these flying satellites.

If you see red and blue lights in the sky, you probably are seeing a jet or an aircraft. You can also find a few planets like Mars and Venus that appear red and blue from the Earth.

Satellites reflect a sharp white light that stays for a while and then moves out of sight. This type of flares is exhibited by satellites alone making it more convenient for astronomers to observe them.

Satellites are designed and launched into space with an objective. Different satellites have different missions. The satellites capture a bird-view of the Earth’s atmosphere and enable the scientists to inspect wildfires, volcanoes, avalanches, and smokes.

Satellites are programmed to sense any incoming danger to Earth from space. They sense and warn the scientists about approaching comets and asteroids that can hit the Earth’s surface or brush past the Earth. The satellites also detect potential danger from UV rays and harmful cosmic rays entering into Earth from space.

Global Positioning System (GPS) comprises more than 30 earth satellites and is used for maps and as a satellite navigation system.

Telecommunication satellites have enabled long-distance telephone calls, TV broadcasts and live shows by providing communication links between various points on Earth. It amplifies the radio signals and creates a channel between the source transmitter and the receiver.

The weather satellites lie at an altitude of 22,000 miles above us and function by monitoring the cloud pasterns for weather forecasts and predict any upcoming changes in the weather.

The geostationary satellites (GEOs) lie in the geostationary orbit and appear steady or fixed at a particular point in the sky. These satellites are positioned directly above the equator and they rotate in the same direction as that of the Earth ( west to east).

A remote sensing satellite is designed with sensors that collect images of Earth’s surface. This satellite uses electromagnetic waves and radiations reflecting from the Earth and indicates changes in temperature of oceans, land, air and other physical characteristics.

Earth observation satellite is a remote sensing satellite modeled to orbit around the Earth capturing images and data for surveys on geographical and weather conditions.

Polar satellites also are known as Polar Orbiting Environmental Satellites (POES) are low altitude satellites that revolve around the poles of the Earth in the north to south direction. These satellites can view the entire Earth’s surface over a 24-hour period.

Many robotic satellites have also been launched to orbit around Venus, Mars, Jupiter, Saturn, Moon, and asteroid Eros.

ISS is a habitable artificial satellite that orbits Earth at an altitude of 215 miles with a constant speed of 17,200 mph. This satellite has polished solar panels that reflect bright light.

ISS has promoted Medical Research to improve knowledge in the space environment which is harmful when humans are exposed to it without a proper spacesuit and protection. Space is defined as a field prone to high levels of radiation, vacuum, extreme temperatures, and intense gravity.

This adversely affects the human body when exposed for a prolonged period causing muscle atrophy, bone degeneration, and fluid shift.

Medical studies are being conducted in the ISS by the National Space Biomedical Research Institute (NSBRI) on the issues of bone loss and risk of fractures in astronomers who land on a planet after a lengthy space trip.

There are over thousands of manned satellites orbiting the Earth including the space stations, space shuttle orbiters and space missions like the first successful Sputnik 1 launched by the Soviet Union on October 4, 1957, and the famous NASA’s Apollo spacecraft orbiting around the moon.