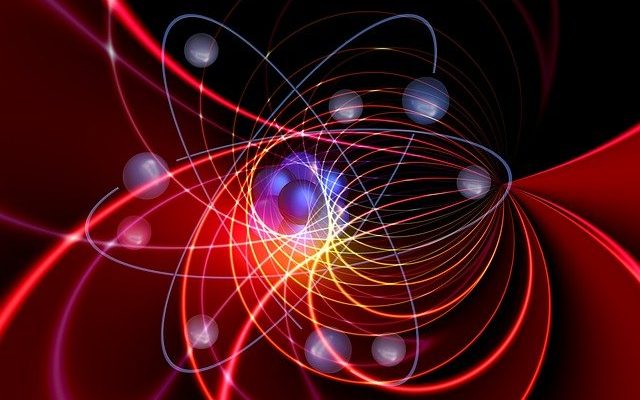 Light and its nature have fascinated and puzzled scientists and philosophers from ancient and modern times alike. Many centuries of debates, deliberations, and research have now established the fact that light has a dual nature, which means that it displays properties of a wave, as well as that of a particle.

So a natural question arises: if the light is a particle, what is the nature or structure of those particles?

Light is said to be made out of elementary particles known as photons. “Photo” indicates light.

Let us see how. 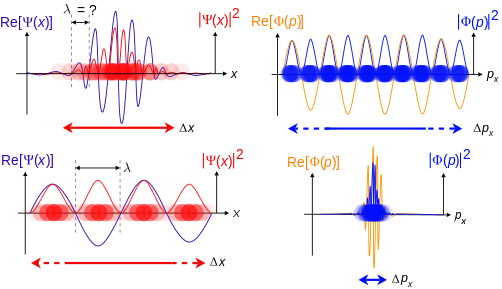 Through research and observations, it was found that objects or particles on a quantum scale displayed many properties which could not be explained using the existing theories of that time.

In the 20th century, Einstein himself said that “classical” concepts such as a particle or a wave nature are not enough to explain the behavior of quantum objects.

Thus, began a new branch of physics, now known as quantum physics. In the case of quantum particles such as electrons and photons, it was found that classifying them as only particles or only waves did not explain their nature, but together they were able to do that.

This is why, scientists proposed that all quantum particles possess dual nature, that of a particle and a wave. This explanation was further extended to all objects, including macroscopic ones too.

It has been theorized that a light wave can be detected because it has a certain measurable wavelength. However, the wavelength for the matter which is heavier is too small to be detected, which is why we cannot perceive it.

Similarly, photons also obey the laws of quantum mechanics and show wave-particle duality. According to Heisenberg’s uncertainty principle, the position and the velocity of an object cannot be measured together accurately.

This means that, for a quantum object like a photon, it is only possible to calculate the probability of finding it at a particular location.

Now, when this calculation is done, the photon is represented as a wave, and the probability of finding a photon is calculated using an expression known as the “wave function”.

Now, a photon displays phenomena such as diffraction and interference which are characteristics of waves. However, there are other experiments that were further conducted to show that it has particle-like nature as well. 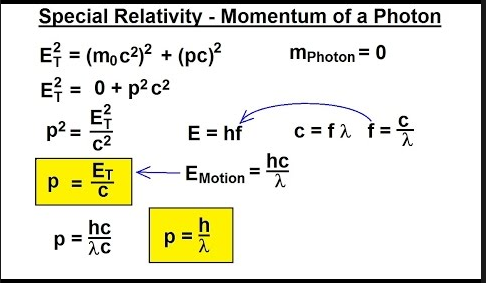 By now, we know that a photon displays both wave and particle nature. Now, since the photon is a small packet of energy, you can argue that by Einstein’s famous equation.

something that contains energy must also have some mass. But we already established that photons don’t have mass. So, where does the energy come from?

How is sunlight able to heat up objects on the earth?

Here is where things get interesting.

Einstein’s equation described above is actually a very specific case of a general equation. Let’s see what that equation is.

In the above equation, E is the total energy of the particle, p is the momentum, m is the mass and c is the speed of light. The momentum of a particle is related to its motion.

It is not always necessary for momentum to be associated with the mass of the object.

The above equation is derived from the relativistic calculations involving energy and momentum.

This equation tells us that, the total energy of a particle is the sum of the energies it has by virtue of its mass and by virtue of its momentum, which is called the “mass-energy” and “momentum-energy” respectively.

Now, when the particle is at rest, then it has no momentum (p=0). In that case, the equation reduces to E = mc2. Here, is the rest mass of the object. On the other hand, if m is zero, then the equation will simply be E = pc.

Therefore, for a massless object such as a photon, all of its energy is derived from its momentum. So, the question comes, how can a particle transfer energy when it has no mass? It can do that, by virtue of its momentum.

When a wave travels, it also takes energy and momentum with it. Since the photon possesses a wave-like nature, it can carry momentum with it, which consequently imparts energy to an object when the wave hits.

Let us now take a look at an interesting phenomenon that arises due to the particle nature of photons. 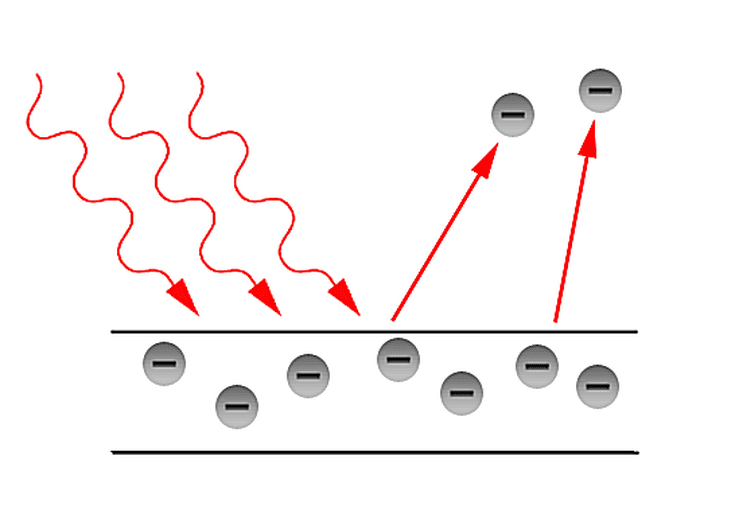 Before the start of the 20th century, scientists thought that all electromagnetic radiation such as light was made out of waves. Then, when scientists started studying the photoelectric effect, they made some interesting observations.

The photoelectric effect is the phenomenon of the ejection of electrons from a metal when light is shone on its surface.

The first question is, why will electrons get ejected from a metal? As we know, the valence electrons of metals are loosely bound to the nucleus of the atom and can be removed by providing some energy, which is known as ionization energy.

We also know that electromagnetic radiation, such as light, can transfer momentum, and consequently, energy to another object.

So when the required amount of energy is provided to the loosely bound electron, it can get ejected from the metal. These electrons are known as photoelectrons.

Before doing this experiment, scientists had assumed that if a metal is exposed to the light of high intensity, then more photoelectrons will get ejected and their kinetic energy will also be higher. However, experimental results indicated an entirely different scenario.

It was observed that photoelectrons get ejected from the metal only and only if the light of a certain frequency is shone on the metal, irrespective of the intensity of light or the time for which the metal is exposed to it.

These observations cannot be explained using the classical wave theory, because here if light acted as a continuous wave that was transferring energy to the electrons, then the ejection of an electron could occur at any frequency of light.

It was thought that if the light is a continuous wave, even a low-intensity wave could keep transferring energy to the electron, which would get emitted when the required ionization energy was accumulated.

However, this is not the case, because here frequency of light was found to be the determining factor for the ejection of electrons.

Max Planck had previously explained that energy could exist in a quantized form. It was Einstein who incorporated this theory into the explanation of the photoelectric effect.

Einstein explained that, in the case of the photoelectric effect, light does not behave as a continuous wave. Rather, it arrives as small and discrete energy packets known as “quanta”.

Later, the name “photon” was proposed for energy packets of light. In a particular type of light, each photon has that particular frequency. Also, the energy of the photon is proportional to the frequency.

Therefore, whenever a photon with frequency (or energy) enough to dislocate the electron strikes the metal surface, one photoelectron is ejected. It is important to note that, each photon corresponds to only one photoelectron.

Now, if a photon with a frequency greater than the threshold frequency (ν0) strikes the metal, the ejected photoelectron will end up with some extra energy left after the energy required to escape the metal surface is utilized.

This extra energy shows up as the kinetic energy of the ejected electron:

Thus, Einstein showed that the energy of the ejected electrons depended upon the frequency of light and not the intensity.

The photoelectric effect also demonstrates the existence of the particle nature of light and hence is a very important experiment.

Einstein won the Nobel Prize in Physics in 1921 for his explanation of the photoelectric effect.

In conclusion, today we looked at what kind of entities photons are. They are quantum objects, which possess a wave-particle dual nature. They are massless, but nevertheless, they carry momentum due to their wave nature.

However, the particle nature of photons is just as important, as it helps to explain important phenomena like the photoelectric effect, which had in fact revolutionized physics in the early 20th century.

I hope you learned many new things today.