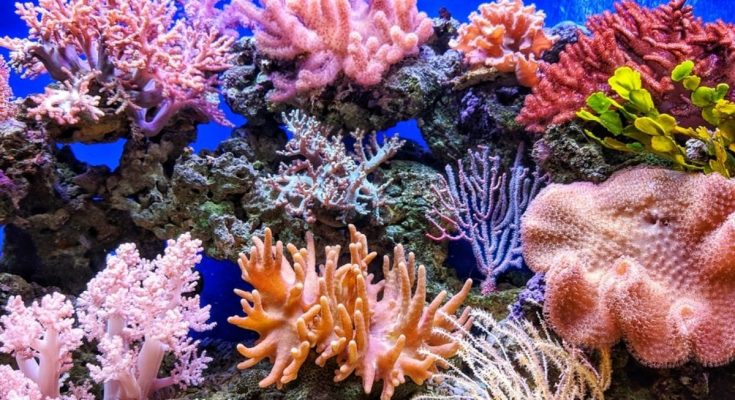 Have you ever seen a coral reef? If you have, then you must have been smitten by its awestruck beauty. They get their beautiful coloration due to the production of colorful proteins, which increase when exposed to sunlight.

But do these reefs merely add to the beauty of the marine ecosystem or do they have other functions as well? It might come as a surprise to many, but coral reefs also play a vital role in helping us to breathe.

Do coral reefs produce oxygen? Yes, they do. Although coral reefs cover only 0.0025% of the ocean floor, they are responsible for producing half of the oxygen present in the Earth’s atmosphere. It is the symbiotic relationship between corals and an alga, zooxanthellae, that makes this miraculous phenomenon possible.

Isn’t it amusing that these reefs only cover up such a little portion of the ocean floor and can still produce such a significant amount of oxygen? They’re crucial not only for our existence but also for the existence of marine life.

In this article, we will get to know about how coral reefs produce oxygen, how they’re a region for thriving biodiversity, and the factors responsible for their survival.

What are Coral Reefs?

A coral reef can be considered a vast ecosystem that consists of colonies of hundreds of tiny living corals. Each of the corals is referred to as a “polyp”.

These corals have branch-like structures; most of them possess a hard, protective shell that is made of calcium carbonate. They also have varying sizes and colors.

When these tiny corals of different colors and sizes grow together in hundreds and thousands, they gradually form a reef.

Did you know that it takes about a year for a 10-centimeters polyp to grow? The time taken for a coral reef to fully grow ranges from a hundred thousand to 30 million years.

It means that the coral reefs we see today have been developing for over ten thousand years. It also means that if these are depleted, it will take them thousands of years to replenish; they might even go extinct for all we know.

We can all agree that the marine world is still largely unexplored. However, so far, we have found four different types of coral reefs.

Let’s learn more about all of them:

The coral reefs that are parallel to the coastline but are separated by a wide lagoon, or any other water body, are called Barrier Reefs. Here, the term “barrier” is used because these reefs create a barrier between the coast and the ocean at the shallowest point, reaching the water’s surface.

Australia’s Great Barrier Reef is the most popular example of a barrier reef. It also happens to be the largest barrier reef in the entire world. 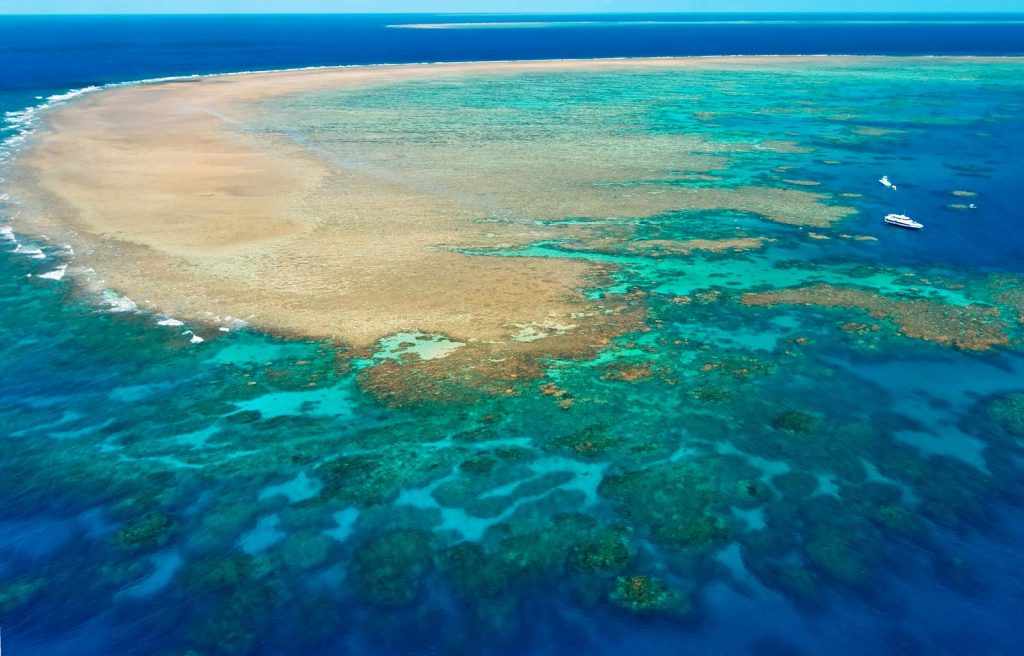 Patch reefs are patches of isolated coral reefs that are close to each other but are separated by sand rings. These reefs are usually found in a collective reef in shallow lagoons and occur under 10-20 feet of water.

Patch reefs are commonly found in the Bahamas, the Pacific Islands, Bermuda, and the Caribbean Islands. 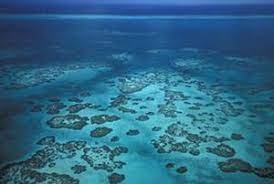 When you see rings of coral reefs surrounding a lagoon, they are known as Atolls. Atolls are usually found in the middle of the ocean.

Some of the famous examples of atolls are the Funafuti and the Fuji atolls in the Ellice Islands. 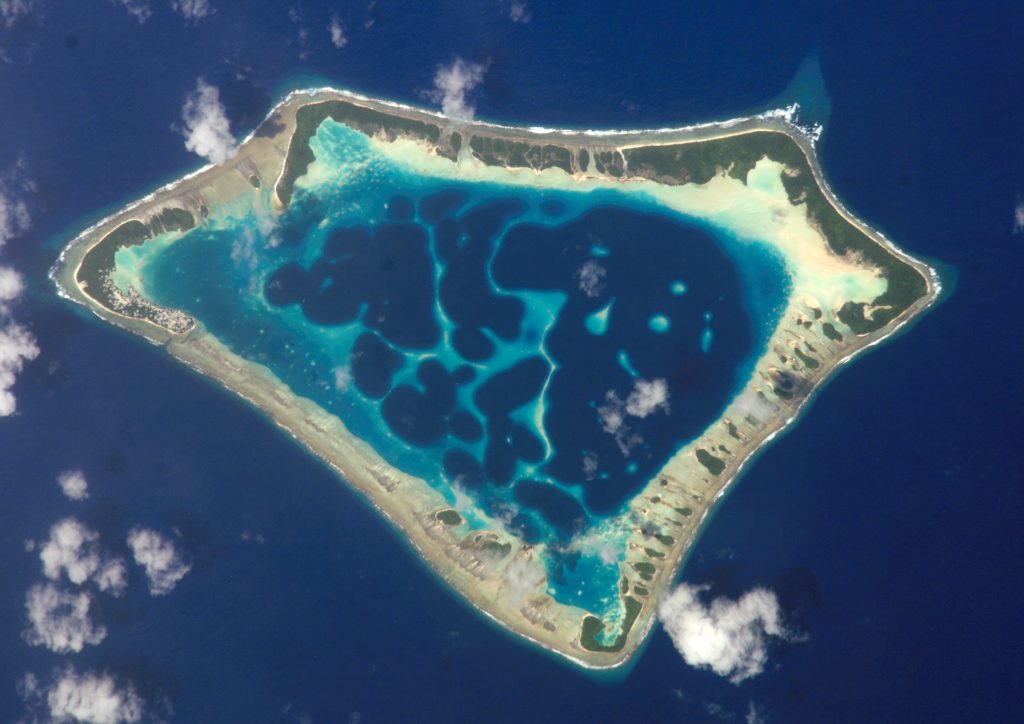 The coral reefs that grow very close to the coast are called Fringing Reefs. These reefs are usually attached to the shoreline, but the portion at their back could be shallowly submerged in the water.

Fringing reefs are the most common coral reef variety. 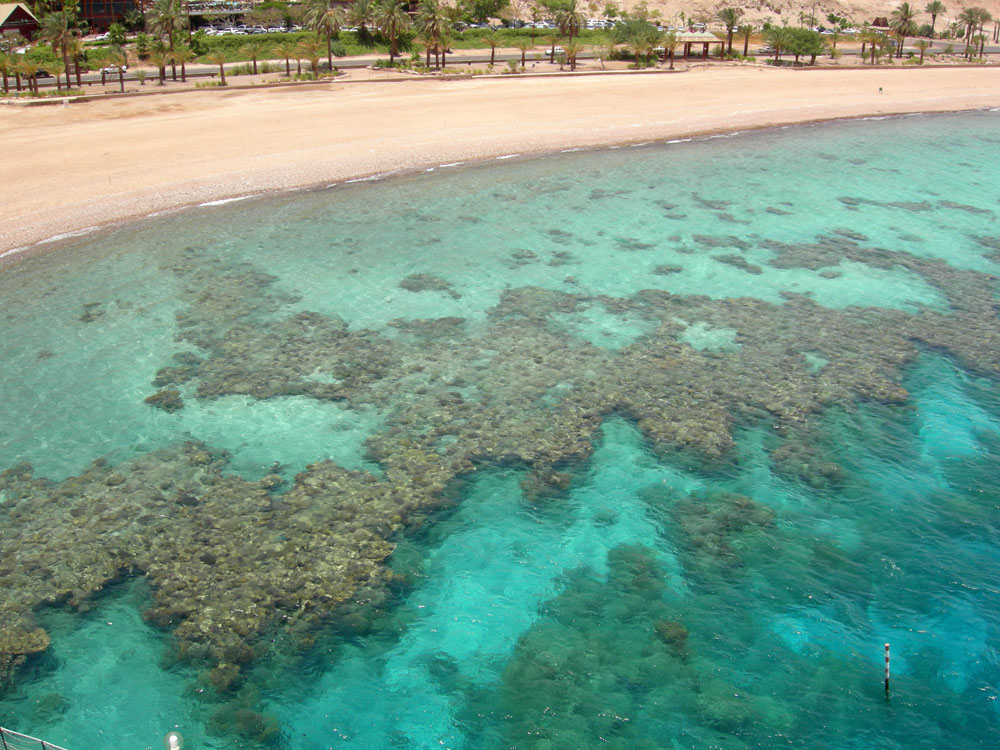 How do coral reefs produce oxygen?

As we have mentioned earlier, coral reefs produce oxygen due to their symbiotic relationship with an alga called zooxanthellae.

But have you ever wondered what a symbiotic relationship means?

The corals provide these algae with a shelter to live. They also provide them with carbon dioxide to carry out the process of photosynthesis.

Thus, it is actually the algae that produce half of the Earth’s oxygen while being in a symbiotic relationship with the coral reefs.

Fun facts: Did you know that it is zooxanthellae that provide the awestruck colors to the corals?

Factors responsible for the survival of coral reefs

Now that we’ve learned all about coral reefs and their importance, we can agree that their survival is crucial for the survival of humans and all other living organisms.

But what do these reefs need to survive? That’s what we will talk about in this section.

Coral reefs have five necessities that can affect their survival, and all of them are listed below. Keep reading to learn more:

Because coral reefs can’t grow below 165 feet, they are always found in shallow waters. But have you ever wondered why that is?

It is because they require sunshine to survive. Sunlight is essential for algae to carry out the process of photosynthesis and produce oxygen. Coral themselves depend on the algae, zooxanthellae, to get oxygen and live.

Corals that build reefs need warm water to live. But warm water doesn’t mean that they can survive at any temperature.

Different types of coral reefs can tolerate only a range of temperatures. They can survive between the warmth of 68 to 90 degrees Fahrenheit or 20 to 32 degrees centigrade.

Coral reefs need clear water for their survival because sunlight can pass only through clear waters and not dense or opaque waters.

Organisms like plankton can cloud the water, which prevents sunlight from reaching the algae present on corals, which is problematic for photosynthesis.

Pollutants and various sediments can easily damage the corals. Wondering how? By making the water cloudy and preventing the sunlight from reaching them. The presence of sediments in water can, thus, destroy corals.

If wastewater is ever released near coral reefs, it will destroy them. It is because nitrogen, the most common nutrient present in wastewater, is known to impair coral growth.

Have you ever found coral reefs in a water body that contains purely freshwater? Probably not. It is because the corals need the presence of salt in water for their growth and are, thus, always formed in seawater.

Before diving into how and why coral reefs have become the hub of biodiversity, let’s discuss what do is meant by the term “biodiversity”?

Biodiversity is a term that refers to the existence of an enormous variety of living organisms present on the surface of the Earth in different ecosystems, along with different environmental factors like temperature, oxygen levels, and climate.

Now, what makes a coral reef a thriving zone for biodiversity? The production of oxygen by coral reefs explains the presence of a wide variety of species found near them. They also provide a home and shelter to these living organisms.

Coral reefs are the sole reason for many species to come together and create an ecosystem. They provide the resources for them to live and thrive, preventing them from being endangered or extinct.

It is as if the reefs act as magnets for different species. Such is the concentration of species inhabiting the coral reefs that many of them are not even known yet. Researches are still conducted around coral reefs to find out new organism species.

Thus, the coral reefs’ function of producing oxygen in such high amounts brings together thousands of flora and fauna, creating a zone of thriving biodiversity.

Are the coral reefs dying? 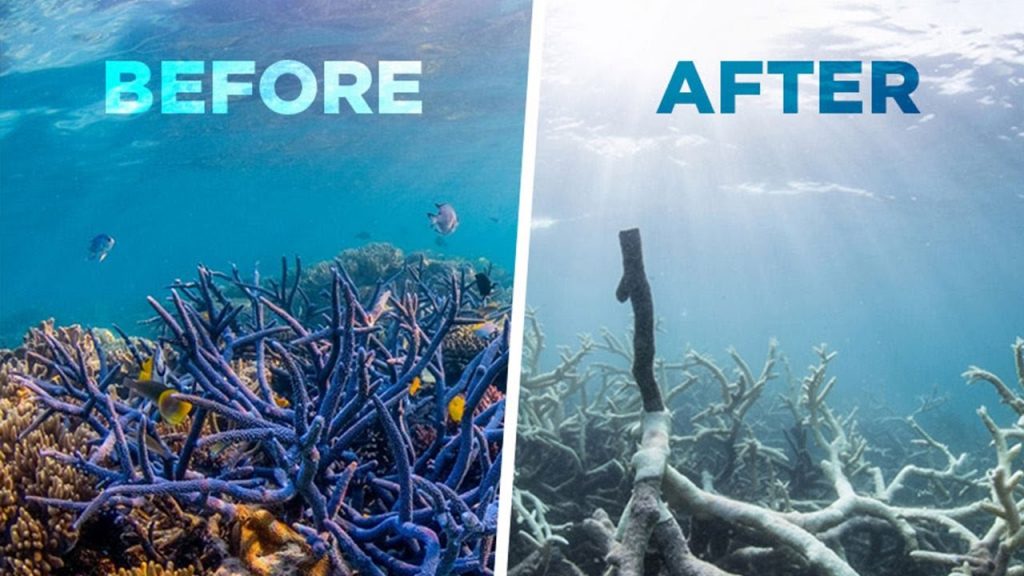 Coral reefs are the most diverse ecosystems in the seas and oceans. In fact, it wouldn’t be wrong to say that they are a part of the reason behind all life on Earth.

However, nowadays, this essential resource is slowly getting depleted because of a range of destructive human activities.

Scientists have predicted that if we proceed at this rate, the existence of all the coral reefs will be threatened (on the brink of extinction) by the year 2050.

What does it mean for us? The extinction of coral reefs will lead to the loss of half of the oxygen present in the atmosphere, which might end up threatening our existence.

The following are some of the reasons behind the depletion of coral reefs:

When the ocean waters become warm, coral detach the oxygen-supplying zooxanthellae from themselves. It leads to the corals losing their color and inbuilt food sources, and, in turn, all the bleached corals turn white.

And although corals can survive bleaching, they cannot survive being subjected to repeated stress. 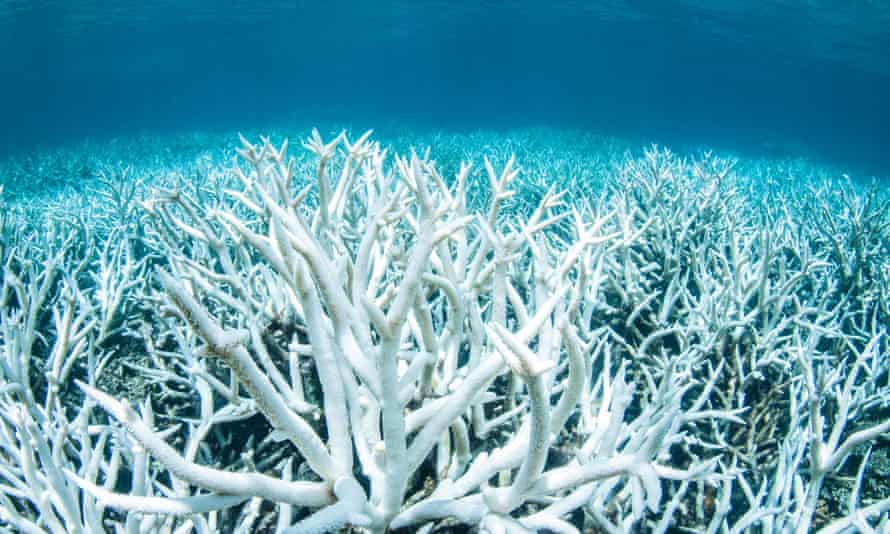 Nowadays, glaciers are melting because of global warming, which has led to a rise in sea levels. And as sea levels are increasing, the coral reefs become more submerged into the sea.

It will eventually lead to a decreased growth of corals, as they would receive less amount of sunlight, which is essential to their survival.

The practice of overfishing and unsustainable fishing near the coral reefs leads to imbalances in the marine ecosystems. In addition to the extinction of fish, it is also known to deplete some key reef species in many locations.

Furthermore, some fishing gears can also inflict physical damage to coral reefs, along with seagrass beds and other vital marine habitats. 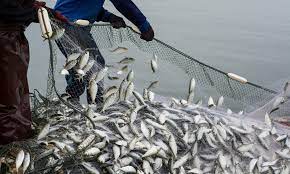 Discharging sewage and industrial waste into seawater introduces pollutants and sediments to it, leading to water pollution.

And as we’ve mentioned earlier, the nutrients present in these contaminants lead to the growth of weed and algae, which damage the corals. 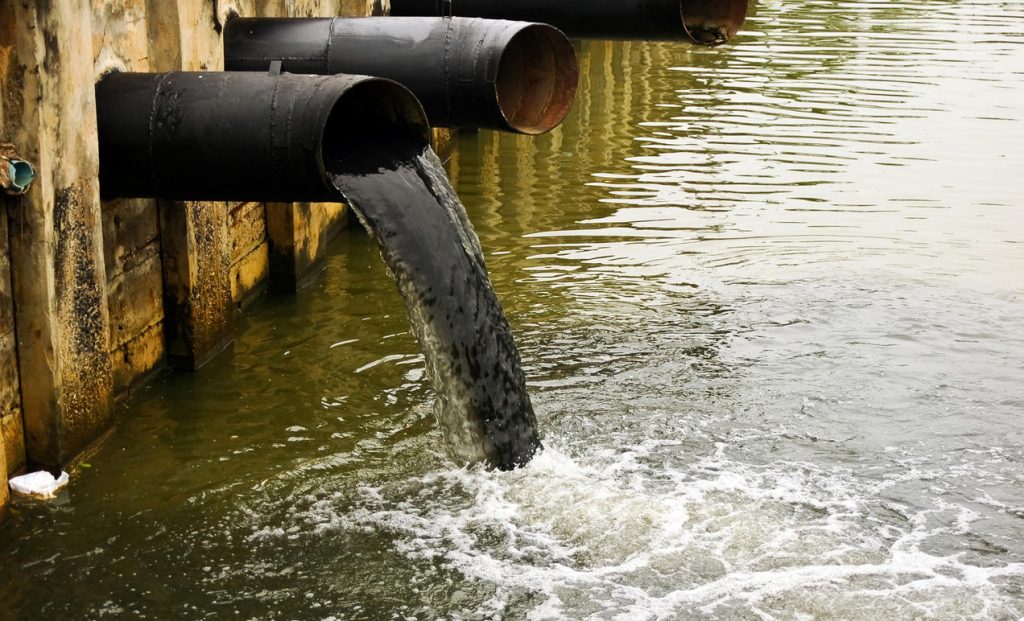 In this article, we have learned about how coral reefs are vital in balancing the oxygen of the atmosphere. These reefs play a key role in our survival as well as the survival of marine creatures. Various phenomena like global warming and pollution are directly or indirectly leading to the depletion of the coral reefs, which can eventually lead to our extinction as well.

If we want to protect the coral reefs, we can play our part by reducing our carbon emission that contributes to global warming.