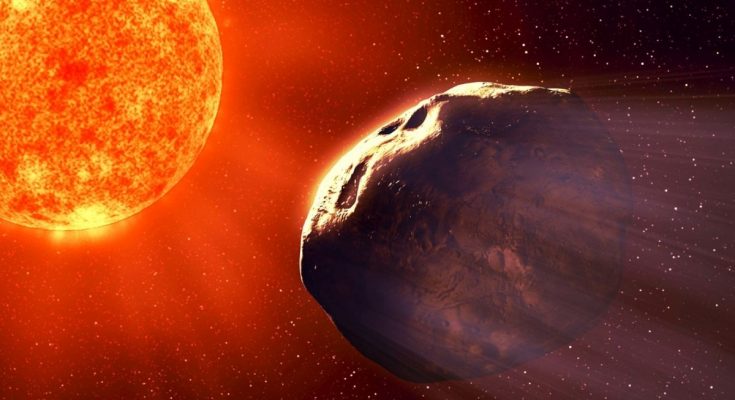 Space is full of so many wonders that are still unknown to us. However, there is also so much that we now know about space. Asteroids are one of the many bodies or masses that are out there in space and in our solar system. As a result, a common question that comes to mind is: do asteroids orbit the Sun?

Yes, asteroids do orbit around the sun. Asteroids orbit an area between Mars and Jupiter known as the asteroid belt. And this belt is also home to some dwarf planets. All these objects in the asteroid belt orbit the sun. This belt follows an elliptical path and orbits the sun in the same direction as the rest of the planets.

Also, I will go over the difference between asteroids, comets, and meteoroids. So, please read the article till the end, I promise you will learn a lot from this article.

How Asteroids Orbit The Sun?

The belt is around 111.5 million miles away from the Earth. It alone contains millions of asteroids and other celestial bodies. All these asteroids vary greatly in size, ranging from the size of boulders to thousands of feet in diameter.

However, some asteroids known as Trojan Asteroids exist outside of the asteroid belt. These trojan asteroids, like the asteroids in the belt, still orbit the Sun. But instead of following an elliptical path, they orbit the sun along the same path as the bigger planet. Among the planets in the solar system, Jupiter has the most Trojan asteroids.

How Close Do Asteroids Get To Earth?

Some asteroids orbit the Sun at a similar distance to the Earth. Scientists classify them as near-Earth asteroids. These asteroids are later divided up into subcategories based on how their orbits overlap with the Earth’s orbit. Amor asteroids are typically found between Earth and Mars. But the orbit can approach Earth’s path. However, Apollo asteroids cross their orbits with Earth’s but spend most of their duration outside of Earth’s path.

While Aten orbits spend most of their time in Earth’s orbit whenever their orbits cross. Lastly, the Atira asteroids have an orbit within Earth’s orbit.

Another noteworthy subcategory for these orbits is PHAs or Potentially Hazardous Asteroids. These asteroids come from around 4.65 million miles away from the Earth and are more than 500 feet across. This makes them a potential threat and requires NASA to monitor them.

According to recent data, scientists have discovered around 27,000 near-Earth asteroids. Of which around 10,000 are bigger than 500 feet in diameter. So, they are keeping their eyes on quite a few of these floating rocks.

Why Do Asteroids Orbit The Sun?

Asteroids are rocky remnants from the formation of the solar system. And like any other celestial body, it is greatly affected by the gravitational pull of the Sun. As a result, these rocky remains begin to orbit around the sun. These asteroids orbit around the sun at such a high velocity that they can orbit without degrading in speed.

However, some of these asteroids will move from orbiting the sun to following another planet’s orbit around the sun. This occurs when these Trojan asteroids are either 60 degrees behind or ahead of the planets.

At these points, the gravitational pull of both the sun and the planets becomes balanced. As a result, they end up following the path of the planet.

This has led many scientists to theorize that some moons belonging to planets in the solar system were asteroids. But due to the gravitational pull of larger planets, they became satellites instead.

Check out the article I wrote on do Satellite blink.

But if for any reason, these asteroids slow down, they will not be able to maintain their orbit. As a result, they will either fall into the Sun, towards Mars, or Jupiter. And even toward the planet whose path they are following.

For a closer look, check out the video attached.

The Closest Asteroid Orbiting The Sun

Recently, in 2020, astronomers discovered an interesting new asteroid dubbed 2020 AV2. This asteroid orbits the sun following an orbit that is between Mercury and Venus. It has a diameter of around 1-3 kilometers.

Technically speaking, it is not the closest asteroid to the sun, as other asteroids come closer to the sun while moving through their orbits. 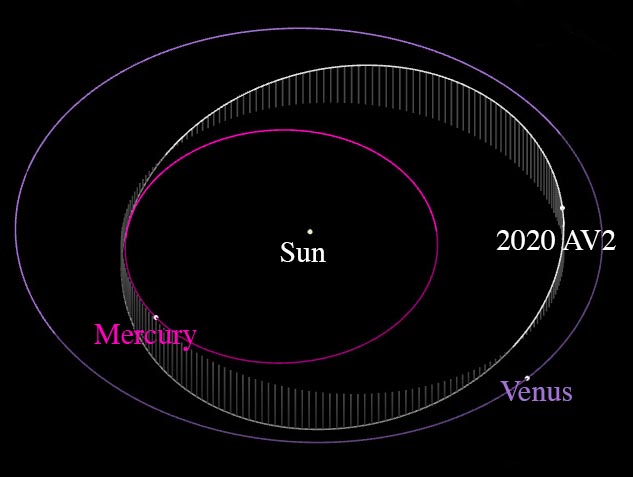 In contrast to the brief period they spend in 2020 AV2, they spend their entire orbit between Mercury and Venus in 2020 AV2. As a result, it is the closest orbiting asteroid known to man.

Does Jupiter have a Solid surface

Asteroids come in all kinds of shapes and sizes. Some might be held together by gravity, while other asteroids are solid straight to the core.

These different asteroids can be divided into three major classes based on their formation.

• C-type: These are carbonaceous asteroids and are one of the most common types of asteroids. They make up 75% of the total known asteroids in the universe.

They are grayish and are mostly made up of silicate rocks and clay. The outer region of the asteroid belt consists of these.

• S-type: These Salicaceous asteroids consist of nickel-iron and silicate materials. And these asteroids also have a greenish to reddish color to them.

They are not as common as C-type asteroids making up only around 17% of the remaining asteroids and are present in the inner ring of the belt.

• M-type: Lastly, the Metallics consist of nickel-iron and have a reddish color to them. These make up the remaining asteroids in the middle region of the belt. 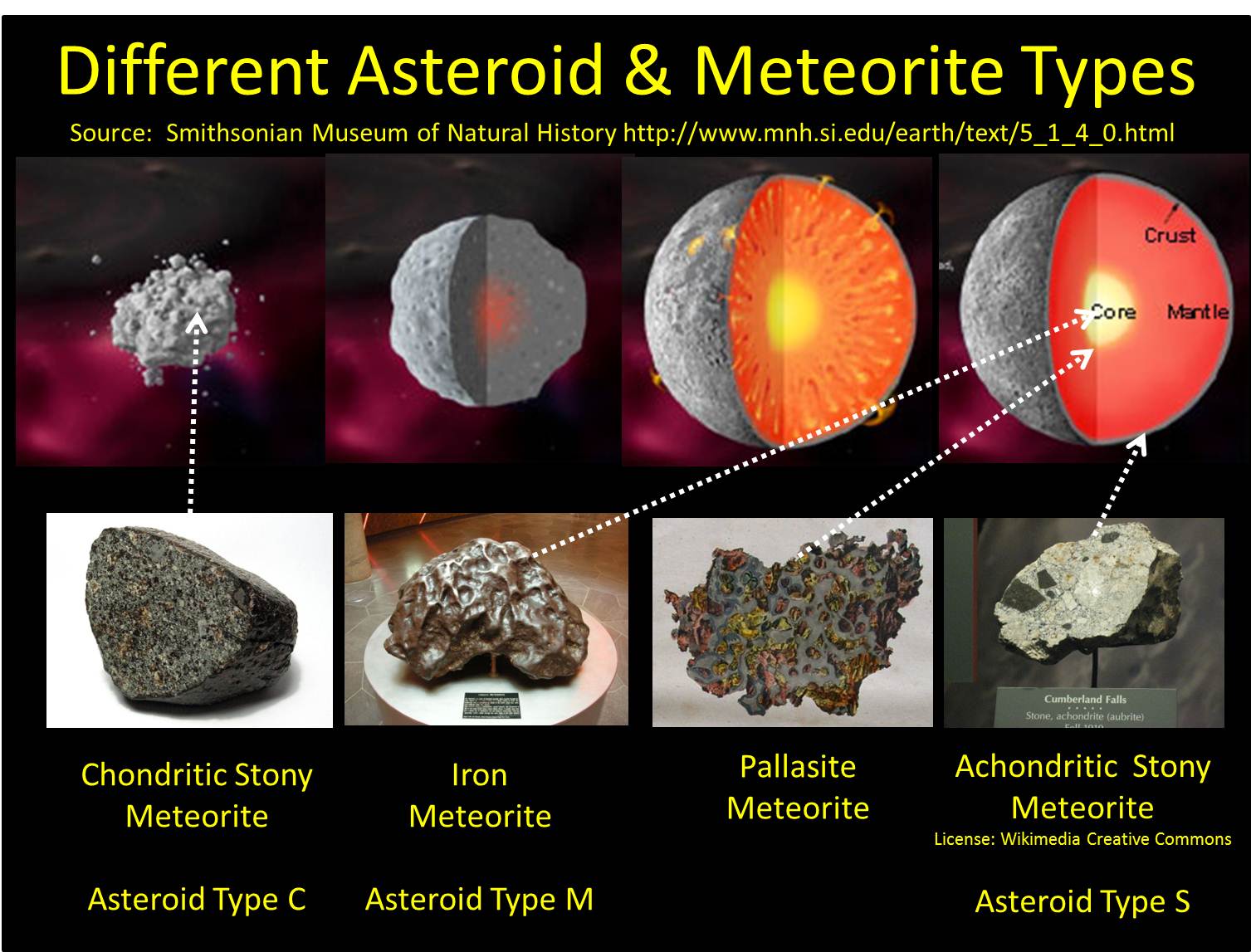 Other than these categories there are other, rarer types of asteroids. This includes V-type asteroids. Similar to the earlier asteroids its name is based on its composition, it has a basaltic volcanic crust to them.

Difference Between Asteroids, Comets, And Meteoroids

A lot of times you will see meteoroids, asteroids, and comets lumped together. They may all be objects moving through space and orbiting around the sun. However, that does not mean that they are the same.

Asteroids are airless, rocky remains from the formation of our solar system that orbits the sun.

Some scientists believe the large grouping of asteroids known as the asteroid belt resulted from the destruction of a planet that was there. But other scientists disagree, believing that these asteroids never formed a planet.

These rocky remains are irregularly shaped, can vary greatly in size, and are often referred to as minor planets or planetoids. They can be as small as a few feet across or as big as 600 miles across.

This makes them far bigger than meteoroids when compared. If we were to combine all the asteroids in the solar system, their mass would still be less than our moon.

Meteoroids are much smaller metallic or rocky bodies floating through space that also orbit around the sun. They are much smaller than asteroids, their sizes ranging from grains of dust to the size of large boulders at best.

Meteoroids can later turn into meteors after entering the Earth’s atmosphere and burning up due to the friction with the atmosphere.

Also, go through the article do meteors orbit around the sun.

However, if these meteors survive the initial entry without burning up completely, they are classified as meteorites. These meteorites are much larger than meteors, and as such, they could survive and make it to the surface. 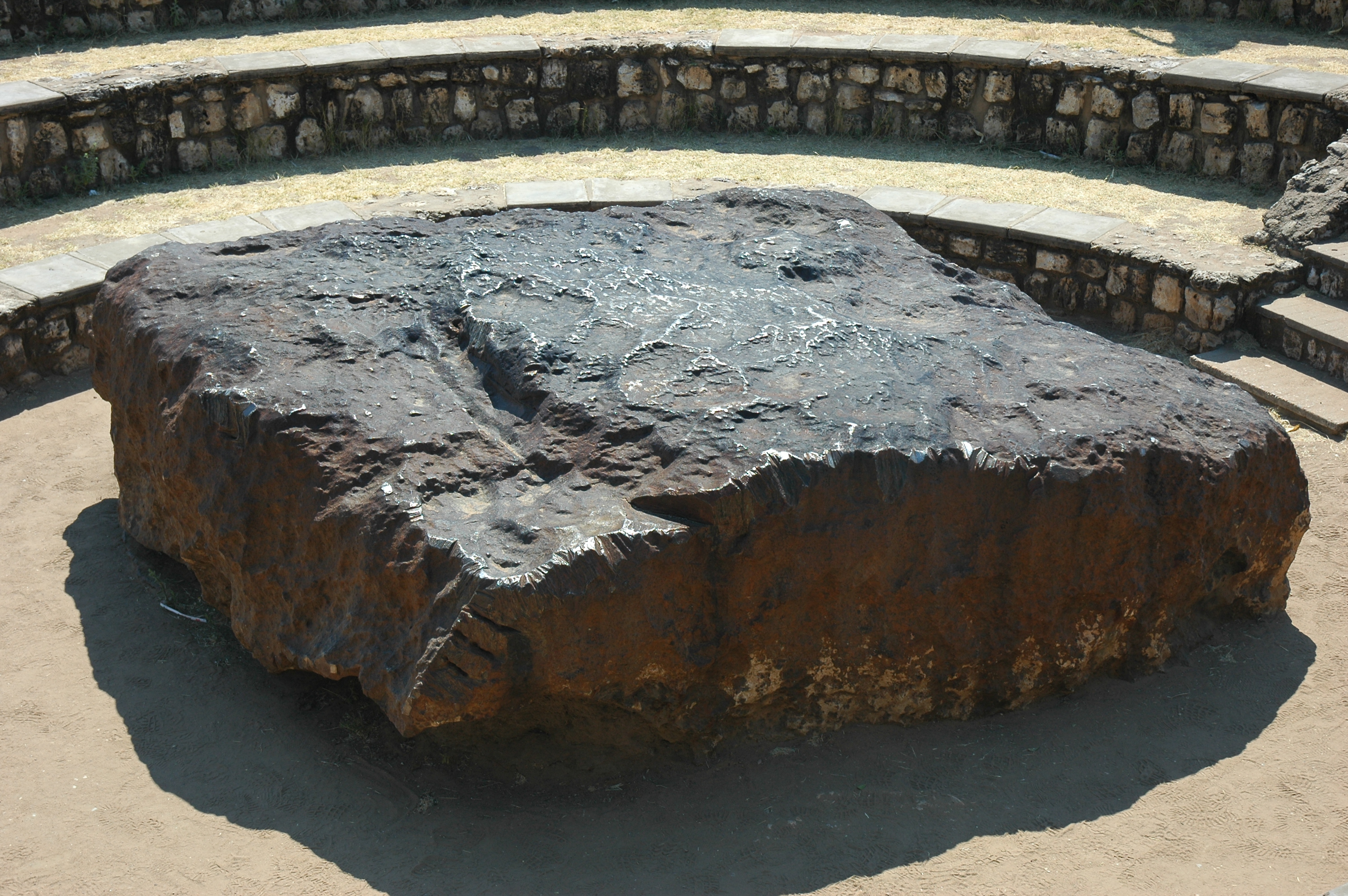 Comets, on the other hand, consist mainly of ice with some dust and rocks. The central mass of the comet is usually surrounded by gas and dust that creates a tail. The orbit of comets is very eccentric when compared to the other two.

Comets usually lose their tails when they get too close to the sun. The heat from the sun causes the icy core to heat up, and the gas and dust are blown away in a stream away from the sun.

So, as you can see, these celestial bodies do have some similarities between them. But they are each separate entities with their own unique characteristics. In this article, I went over one of the many mysterious bodies floating around in space. And it answered the simple question: do Asteroids orbit the Sun? Not only did I answer that question, but I also went into how and why it orbits the sun, as well as some other questions that might arise.

I hope you found this article to be informative. Thank you for reading and good luck.