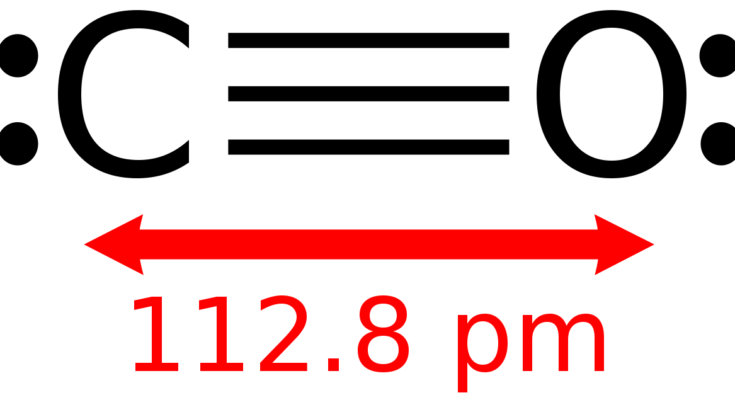 Carbon monoxide (CO) is a tasteless and odorless flammable gas that is quite toxic in nature to the fauna. It is so because, carbon monoxide uses hemoglobin, an oxygen carrier, to reach throughout the body when in a concentration of more than 35ppm. The carbon monoxide is produced from the partial oxidation of carbon dioxide (CO2) or any other carbon-containing element.

The Lewis structure, also called as electron dot structure, is a simplified method of representing the number of valence electrons present within an atom or a molecule.

Furthermore, the structure helps with determining the number of lone pairs of electrons present in an atom and how they act in a bond formation.

The structure is drawn using dots which determine the number of valence electrons in an atom and lines between the atoms, determining the number of bonds forming.

The maximum number of valence electrons that can be written around an atom is eight. Lewis structure of single carbon and oxygen atom separately is as shown below.

The atomic number of the carbon is six which makes its electronic configuration 1s2 2s2 2p2.

As the 2p shell has a capacity of holding up to six electrons, there comes a deficiency of four electrons.

So, carbon has four valence electrons which are ready to act in a bond formation to stable its atomic structure.

On the other hand, the atomic number of an oxygen atom is eight which makes its electronic configuration 1s2 2s2 2p4.

As the 2p shell has a capacity of holding up to six electrons in total, there is a deficiency of two electrons.

So, oxygen has six valence electrons in total, which are ready to act in a bond formation to stabilize its electronic configuration.

It is essential to realize that the larger the number of valence electrons, the more it is difficult for an atom to donate it. As it needs high energy for a strong bond formation to take place.

The electrons present in the outermost shell which is also said to be the valence electrons, of an atom participate in the bond formation with other atoms to gain stability.

Because the outermost orbit of non-noble elements is not completely filled and is unstable, the valence electrons readily react with a nearby atom to stabilize its orbit.

What is the Octet rule?

Whereas, an oxygen atom has six valence electrons and a deficiency of two.

The lewis structure is written in such a manner to fill the deficiency of both the atom in the case of carbon monoxide (CO).

From the aforementioned Lewis structures of single oxygen and carbon atom, it can be analyzed that carbon and oxygen atoms have ten valence electrons which will participate in the bond formation.

Below mentioned are the steps to draw Lewis structure of Carbon Monoxide:

The bond angle between the carbon and the oxygen atom is 180 degrees. It makes the geometrical structure of the carbon monoxide linear.

It can further be confirmed with the help of the valence shell electron pair repulsion (VSEPR) theory, which shows the formation of a shared covalent triple bond between the carbon and oxygen atoms.

Whereas, the lone pairs are drawn in the exact opposite sides where bond formation has taken place.

As per the VSEPR theory, the electron cloud, as well as the lone pair of the electrons on both the atoms, will repel each other.

As a result, they will be pushed apart from one another, placing both the carbon and oxygen atom 180 degrees to one another, in a linear geometry. 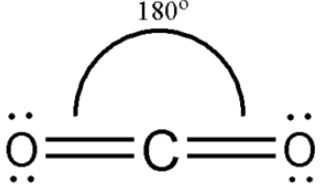 The hybridization of carbon monoxide is sp as its geometrical structure is linear. The below mention diagram is the valence shell electronic configuration of both the carbon and oxygen atom. 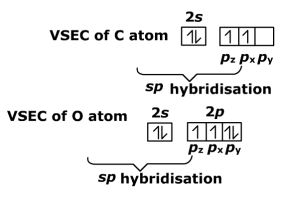 This leads to the formation of two weak pi (π) bonds and one strong sigma (σ) bond.

This is how three covalent bonds are formed between the carbon and the oxygen molecules of the carbon monoxide, one strong and two weak.

It might be interesting for you to realize that both carbon and oxygen as a lone pair of electrons in the sp(z) orbital. 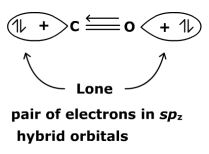 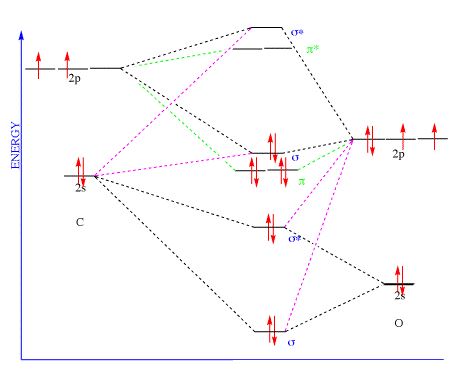 The molecular orbital diagram is a diagrammatic representation of showing how chemical bonding is taking place within a molecule.

It determines how pi and sigma bonds have been formed within the shared covalent bond, along with the intensity in terms of strength.

It is expected that both the charge will cancel out one another, making the net overall charge on the carbon monoxide (CO) molecule is neutral.

No, it does not happen, as the two electrons on the carbon are lone pairs, not the bonding pairs. Due to this reason, a partial menial negative develops on the carbon atom.

According to the concept of electronegativity, as oxygen is more electronegative than the carbon atom, its orbitals are more stable and of lower energy than that of the carbon.

Therefore, a net dipole moment also exists across the CO molecule resulting in a polar molecule. You can read out the article on the polarity of CO.

Both the carbon and oxygen atoms have three filled bonding orbitals.

It might be interesting for you to realize that molecular orbital theory is much more appropriate for carbon monoxide (CO) to study rather than hybridization.