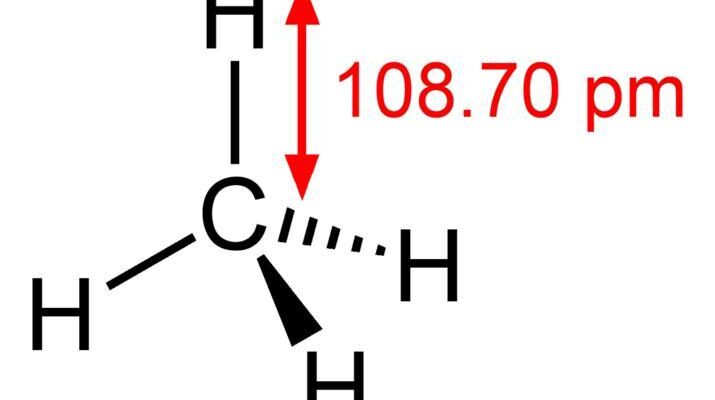 Methane or CH4 is a naturally occurring gas and relatively abundant on the Earth, making it an economically efficient fuel. As it releases more light and heat on burning, it is preferred more than coal, fossil fuel, or gasoline for energy production.

It is one reason why overproduction of methane has made it a considerate greenhouse gas (GHG) where it is affecting the temperature and climate system of the Earth.

The Lewis structure is a pictorial representation of how many valence electrons are present in an atom.

Moreover, the diagram also helps with determining how the bond formation is taking place between the atoms to form a molecule, ultimately a compound.

The Lewis diagram is drawn by showing valence electrons in the form of dots drawn around the atom and lines predicting the bond formation.

These lines also determine whether a single, double, or triple bond has been formed helping with predicting the hybridization of the central atom.

Valence electrons are those electrons that take participation in the bond formation and exist in the outermost shell of an atom.

These are the electrons that participate in the bond formation by either getting donated or accepted between the atoms.

There can be a maximum of eight valence electrons in an atom.

To know the number of valence electrons in a carbon atom, first, it is crucial to find its atomic number which is six. So, the electronic configuration of the carbon will be 1s2 2s2 2p2.

As the p shell needs to accommodate a total of six electrons, there is a dearth of four electrons. Due to this, the number of valence electrons in the carbon atom has been four.

Whereas, on the other hand, the atomic number of the hydrogen atom is one that makes its electronic configuration 1s1.

As there is a dearth of only one electron, the number of valence electrons in a hydrogen atom is one.

This rule says the maximum valence electrons that can be drawn around an atom are eight.

The lewis structure of CH4 is drawn to fulfill the need of valence electrons by all the atoms.

Here we will learn about how the lewis dot structure is drawn for CH4 molecule, step by step.

Firstly, look for the total number of valence electrons required by a single CH4 molecule, which is sixteen.

Next, a search of electrons is required by a single CH4 molecule to reach a stable condition.

It is eight for a single CH4 molecule, as four are needed by the carbon atom and one by hydrogen atom each.

The next step is to find the total number and type of bond-forming that atoms within a single CH4 molecule.

A single shared covalent bond is formed between each carbon and hydrogen atom (C-H).

Lastly, search for the central atom that is usually the single atom in a molecule. It is carbon in the case of methane (CH4).

Now, draw the lewis structure of the methane (CH4) as below 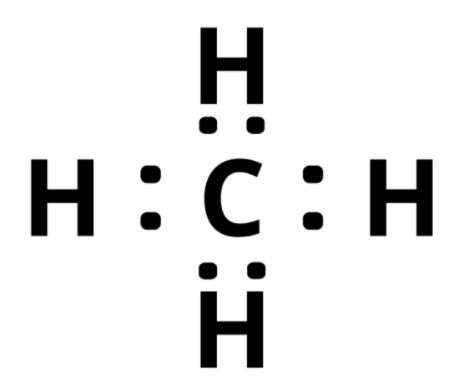 The Geometrical Structure of Methane (CH4)

The single-molecule of methane (CH4) is tetrahedral with no lone pairs on any atom. This behavior is explained with the help of the Valence Shell Electron Pair Repulsion (VSEPR) theory.

This theory is used to predict the geometrical structure of a molecule along with the reason for such a shape.

For the methane (CH4) molecule, this theory says as there exists no distortion in the structure of CH4, it is an ideal bent-shaped molecule or tetrahedron having a bond angle of 109.5° between hydrogen-carbon-hydrogen atoms (H-C-H).

Due to the symmetrical shape of the bonds formed in the CH4 molecule, the charges on its atoms are equally distributed and no polarization takes place ie; the Methane molecule is a nonpolar molecule.

For better understanding, you can refer to the article written on the polarity of CH4.

The distortion from the ideal bond angle within a molecule occurs because of the presence of lone pairs and bond length between the central atom and the side atoms.

From the Lewis structure, it can be understood that an equal number of electron sharing is taking place between the carbon atom and four hydrogen atoms altogether.

It is the reason why the structure of methane is highly stable in nature. 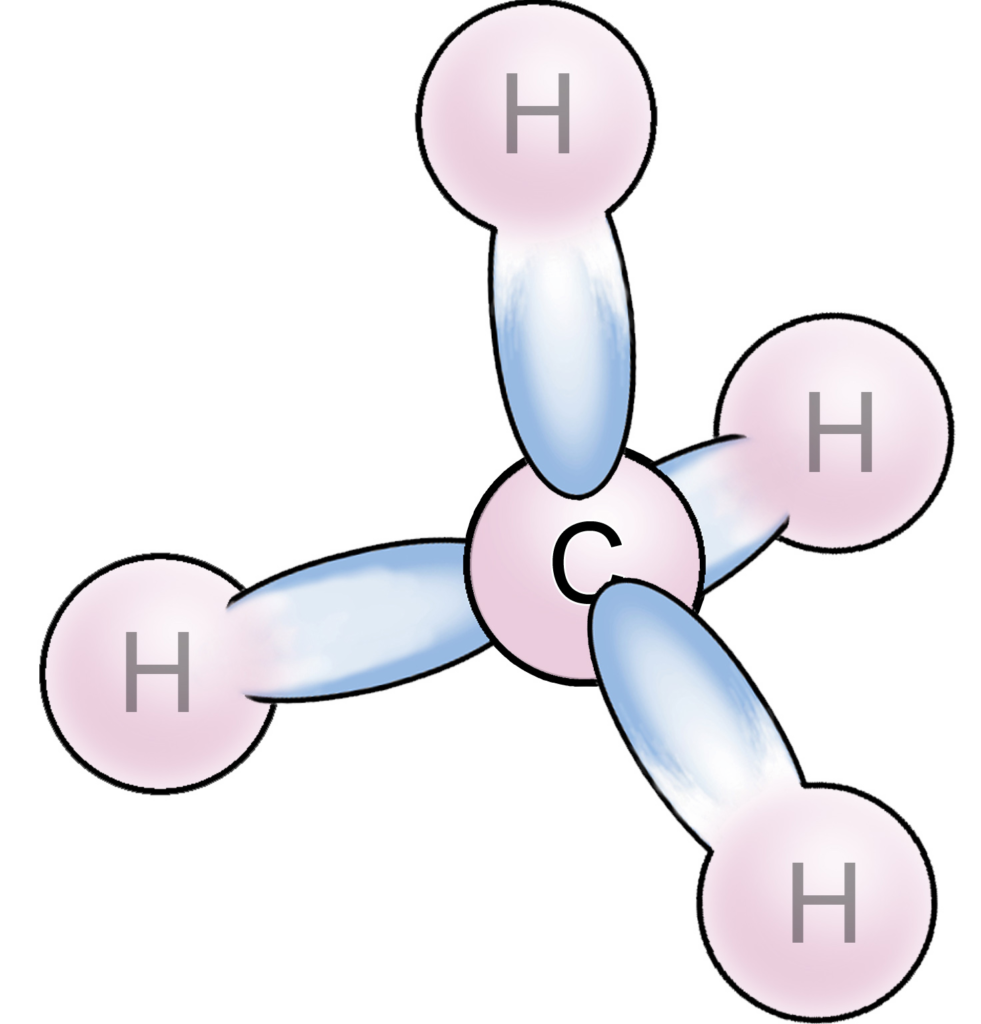 Hybridization is a mathematical process of mixing and overlapping at least two atomic orbitals within the same atom to produce completely different orbitals and the same energy called new hybrid orbitals.

If we look for the hybridization of the carbon atom in the methane (CH4), it is sp3.

It is due to the reason that the one 2s and three 2p orbitals of the carbon mixes and overlaps to form four new hybrid orbitals of equal energy and similar shape.

In addition to this, the four hydrogen atoms also use these four new hybrid orbitals to produce carbon-hydrogen (C-H) sigma bonds.

We know that there exists one sigma bond (σ) and no pi (π) bond in the single shared covalent bond.

So, this is how four sigma bonds are formed in a methane molecule with no pi bond where the sigma bond further contributes to the hybridization of the carbon atom.

Also, check out a related article on the CH4 Intermolecular Forces.

The molecular orbital diagram helps with determining how mixing and overlapping have taken place in a molecule to conclude upon the hybridization type.

Each carbon and hydrogen bond (C-H) forms due to head-on overlapping of the only occupied sp3 hybrid orbital of the carbon with the 1s orbital of the hydrogen.

As there exist no pi bonds, only head-on overlapping takes place within the methane (CH4) molecule.

From the diagram, you can see that all the four orbitals at the top are empty having a change in phase between carbon and hydrogen.

To put an electron in any of these orbitals, the bonding energy needs to be reduced between the bonded carbon and hydrogen atoms.

On the other hand, all four orbitals at the bottom are filled as they are lower in energy than the non-bonding energy level.

The molecular orbital of the lowest energy is equally distributed throughout the molecule.

The Lewis structure of the methane (CH4) molecule is drawn with four single shared covalent bonds between the carbon and hydrogen atoms each.

Moreover, as there exist sigma bonds only and one 2s and three 2p orbitals of the carbon produce four new hybrid orbitals, the hybridization of CH4 is sp3.

It is interesting to realize that irrespective of having sigma bonds, the new hybrid orbitals acquire major characteristics of p orbital.

Moreover, the bond angle is the ideal tetrahedral angle of 109.5° because of no lone pair of electrons on an atom.