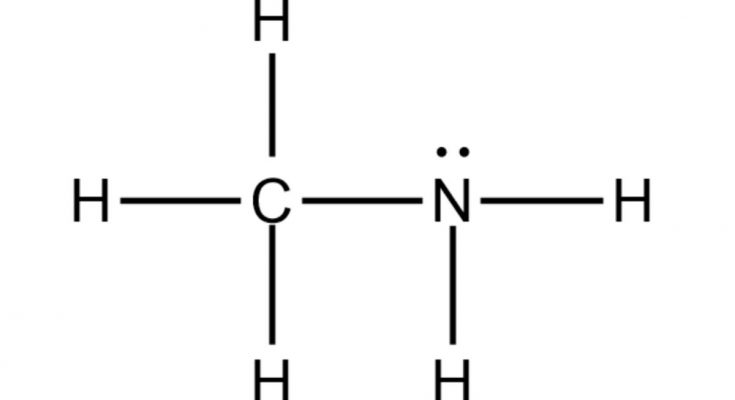 CH3NH2 is the molecular formula of Methylamine which is the simplest of amine. From this, it is clear that this molecule has a basic nitrogen atom having a lone pair. Methylamine is an organic molecule that is colorless in the gaseous state and is a derivative of ammonia.

Moreover, this molecule has a strong pungent fishy smell and is used commercially to produce ephedrine, carbofuran, metham sodium, methyl formamide, theophylline, carbaryl, N-methyl pyrrolidone. Methylamine is a known nucleophile where it bonds with the electrophiles by donating the electron pairs, which makes it a Lewis base.

A Lewis base is a donor molecule that easily donates a pair of non-bonding electrons to achieve a stable electronic configuration.

The Lewis structure is a diagrammatic representation of how the movement of valence electrons is occurring to ensure bond formation. To study a chemical compound, the Lewis structure is the first step, to begin with as it helps with determining from which group the molecule belongs in alignment with the periodic table.

It is a property conducive to covalent compounds mainly and is used to study formal charge on the participating atoms and chemical bonding taking place between the atoms. When more than one Lewis diagram can be drawn for a molecule, the diagrams are called resonance structures.

To begin with, understanding the Lewis structure of methylamine (CH3NH2) it is first crucial to understand how many valence electrons each participating atom has. The electronic configuration of carbon is 1s2 2s2 2p2 as its atomic number is 6.

As p shell can accommodate a maximum of 6 electrons, there is a vacancy of 4 electrons which makes the valence electrons for carbon 4. Moreover, the electronic configuration of hydrogen and nitrogen are 1s1 and 1s2 2s2 2p1 as their atomic numbers are 1 and 7.

Now, let us study the steps involved in drawing the Lewis Structure of methylamine (CH3NH2):

Step 1: Find the total number of valence electrons methylamine already has: It is 14 for one methylamine (CH3NH2) molecule as 4 are coming from the carbon, 1 from each hydrogen atom, and 5 from the nitrogen atom.

Step 3: Search for the central atom in one methylamine (CH3NH2) molecule: From the molecular formula, it is clear that three hydrogen atoms are bonded to the carbon atom while two are bonded to the nitrogen atom. This makes CH3 and NH2 two separate entities giving rise to two central atoms, that are, carbon and nitrogen.

Step 5: Now, draw the structure by analyzing all the aforementioned points: 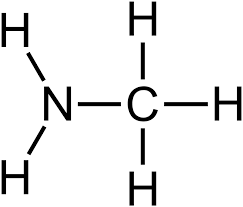 The molecular geometry of a molecule depends upon the Lewis structure and helps with determining the bond length, angles, type, and other geometrical parameters based on the position of each of the participating atoms.

It might be interesting for you to realize that the ideal bond angle for trigonal pyramidal shape is 109.5° where this deviation from the ideal percentage can be explained by the presence of a lone pair of electrons on the nitrogen atom.

This can be explained with the help of the Valence Shell Electron Pair Repulsion (VSEPR) theory, which says the lone pairs are present in the orbitals that are shorter and rounder than the orbitals having bonding pair of electrons.

This leads to excessive repulsion between the lone pair of electrons and the bonding pair which reduces the bond angle from its ideal percentage. 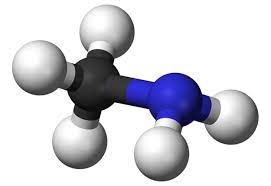 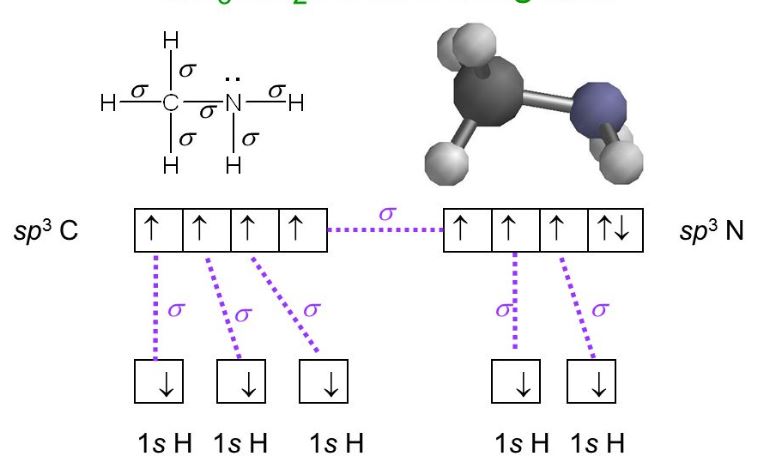 Hybridization is a theoretical idea that says the atomic orbitals mix and overlaps in a certain way to form new hybrid orbitals which affect the overall molecular geometry and the chemical bonding properties of the participating atoms changing the complete molecule.

This mixing and overlapping occur in alignment with the principles of quantum mechanics which says the atomic orbitals of similar energies can participate in the hybridization process which is inclusive of both filled and half-filled orbitals.

From the Valence Bond Theory (VBT), it can be analyzed that both the carbon and nitrogen atoms in the methylamine (CH3NH2) are sp3 hybridized as the C-N sigma bond is overlapping between the two sp3 orbitals.

Polarity in chemical molecules is a property allowing them to decide whether to attract a nearby atom or not. The chemical polarity leads to the separation of electrical charges generating an overall net dipole moment on the molecule by forming one positively charged end and other negatively charged.

The polarity of a molecule can easily be studied through the electronegativity values of the participating atoms. It is a tendency of the atoms to attract the shared pair of electrons towards themselves in order to stabilize their electronic configuration.

When it comes to methylamine (CH3NH2), it is a polar molecule as there exists a dipole moment on the overall molecule because of the electronegativity differences among the participating atoms. The electronegativity values of carbon, hydrogen, and nitrogen are 2.55, 2.20, and 3.04.

As the nitrogen atom itself has the highest electronegativity value the dipole moment will be highest around it which will lead to polarity in the methylamine (CH3NH2) molecule.

Moreover, As the difference between the carbon and hydrogen atom is less and next to negligible, the bond will be nonpolar in nature but its intensity is way too lesser than the dipole moment around the nitrogen atom. Due to this, methylamine (CH3NH2) is a polar molecule.

Methylamine (CH3NH2) is a nucleophile and the simplest of amine known which makes it a good donor of electrons for bond formation. The Lewis structure helped with figuring out that the methylamine molecule has two central atoms which gave molecular geometrical structures of tetrahedral and trigonal pyramidal, to it.

Moreover, both the central atoms are sp3 hybridized where the bond angle of carbon atom is following ideal percentage but for nitrogen, there is a deviation and is of a lower number than expected due to the presence of a lone pair of electrons.

Lastly, the methylamine molecule is polar in nature because of the high dipole moment on the nitrogen atom and negligible on the carbon-hydrogen bond.