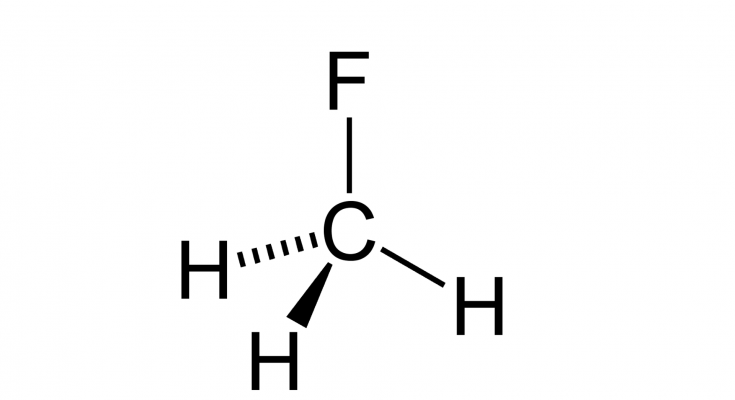 CH3F or methyl fluoride is also known as fluoromethane is a non-toxic compressed gas. Fluoromethane, as the name suggests, is a haloalkane (as a halide atom, fluoride, in this case, is bonded to the carbon atom in an alkane).

Fluoromethane belongs to the HFC(Hydro Fluoro Carbons) family and hence is a harmless greenhouse gas. HFCs are related to CFCs(Chlorofluorocarbons) but do not cause any damage to the ozone layer as they do not give rise to reactive chlorine. Methyl fluoride is the member with the lowest mass in the HFC series.

CH3F is a liquefiable, flammable gas with a molecular weight of 37.015 g/mol. The molecular geometry of the molecule is tetrahedral, that is, sp3 hybridization.

Methyl fluoride is a colorless gas. The gas has a pleasant odor and at high concentrations, the smell is similar to ether. The vapor pressure of the fluoromethane gas is 3.3 MPa.

Other names for CH3F include Freon 41, HFC-41, and Halocarbon-41. The gas finds applications as an etching gas in plasma etch reactors in the manufacturing processes of semiconductors.

Here are the steps to be followed to determine the Lewis Structure of CH3F or Fluoromethane:

Step 2: Note for how many more valence electrons are required by one methyl fluoride (CH3F):

Therefore, as mentioned in the earlier step, the total number of valence electrons required will be 8(4 for carbon,1 for fluorine,1 for each hydrogen atom).

Step 3: Observe which atom will be most suitable as the central atom in one methyl fluoride (CH3F) molecule:

Here, carbon is the most suitable atom as hydrogen can never be the central atom because it requires only one more valence electron. Besides, fluorine is more electronegative than C.

Hence, C will be the central atom, and to satisfy the valence electron requirement, the three hydrogen atoms, and the fluorine atom will be directly bonded to the central atom.

Step 4: Find the type of bond-forming (single, double, or triple) between the atoms of the methyl fluoride (CH3F):

All the bonds in the fluoromethane molecule will be single as all the outer atoms require only one electron to fill their outer shell or the valence shell and there are no extra lone pairs.

Step 5: By analyzing all the above-mentioned points, the electron-dot structure or Lewis structure of methyl fluoride(CH3F) can be constructed as: 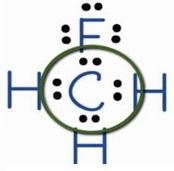 or it can also be displayed as below. 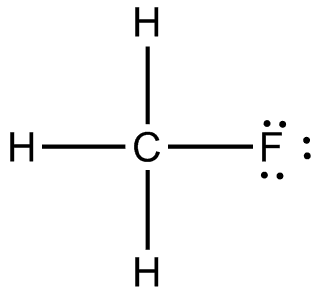 Note that a single bond represents the sharing of one pair of electrons uniting the two atoms.

CH3F has a tetrahedral geometry having covalent bonding with carbon as the central atom. The molecule does not contain any lone pairs but four sigma bonds (single bonds).

The structure of fluoromethane is similar to methane. However, the bond angles are different due to the higher electronegativity of Fluorine.

The C-F bond length is nearly 0.14nm(approximately) and the bond energy is 552kJ/mol.

The molecular geometry or shape of the molecule is determined by its hybridization. 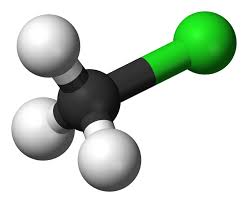 Fluoromethane or methyl fluoride has an sp3 hybridization or molecular geometry.

Although, the molecule is polar. The molecular geometry or hybridization is calculated as:

In the case of CH3F molecules, the number of sigma bonds is 4( one C-F bond and three C-H bonds), while the number of lone pairs is zero.

2. Calculate the steric number, that is, the sum of the number of lone pairs and sigma bonds.

Here, the steric number comes out to be 4 which indicates sp3 hybridization, that is, tetrahedral molecular geometry.

Methyl Fluoride or Fluoromethane is a polar molecule despite having sp3 hybridization.

There are several reasons for the polarity of the molecule, one being the difference in the electronegativities of Carbon and Fluorine atoms.

The fluorine atom is far more electronegative than the Carbon atom, resulting in the polarity of the C-F bond. 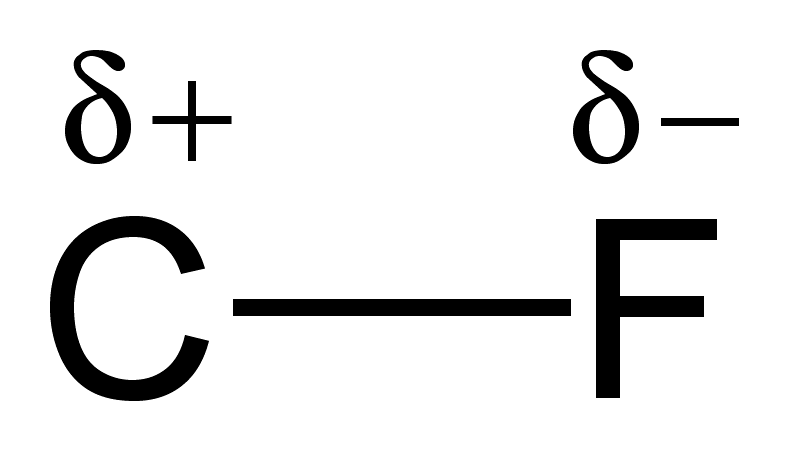 The polarity of a bond affects the bond length and bond strength due to the uneven positioning of valence electrons between the bonding atoms.

Several factors need to be considered to determine whether a molecule is polar or nonpolar.

The major factors responsible are electronegativity, dipole moment, and geometrical shape. All three factors are interrelated.

Electronegativity: It is the measure of the strength of an atom to captivate the bonded electron pair towards itself.

The polarity of a bond is directly proportional to the difference between the electronegativities of the atoms forming the bond.

Dipole moment: Dipole moment is calculated as the product of charge on individual atoms and the distance linking the centers of the two opposite charges.

It is represented by the symbol μ and is generally calculated in Debye units(D).

Hence, the overall dipole moment of the molecule is non-zero as well.

Molecular Geometry: The geometry or shape of a molecule depends on its hybridization, that is, it depends on the number of shared electrons as well as the lone pairs.

The dipole moment of the molecule depends on the arrangement of the dipoles inside it.

If the dipoles are oriented opposite to each other and have similar magnitude, they tend to cancel each other’s effect.

Hence, if all the dipoles inside a molecule are canceled, it results in a nonpolar molecule. Generally, symmetric molecules are polar as the opposite dipoles are canceled.

CH3F molecules have an asymmetric geometry due to the difference in C-F bond length and C-H bond length which is a result of the electronegativity difference between carbon and fluorine.

Therefore, after keeping all the above-mentioned factors in mind, it can be concluded that CH3F is a polar molecule with a dipole moment of 1.847D.

Some applications of the substance include:

1. Utilized in the manufacturing process of semiconductors and electronic articles.CH3F often finds its application as an etching gas.

2. Utilized for biological experiments.CH3f or methyl fluoride can be served as a selective inhibitor of methane oxidation next to aerobic bacteria.

3. The CFC family finds application in refrigerating systems and HFC-41 or fluoromethane is the smallest member of the CFC family.

Besides, methyl fluoride is an HFC(Hydro Fluoro Carbon) which relates to CFCs(Chlorofluorocarbon), but it is harmless to the ozone layer as no reactive chlorine is produced in this case.

CH3F or fluoromethane also known by the names, Freon-41, HFC-41, methyl fluoride, Halocarbon-41, and trideuterio (fluoro)methane is a haloalkane formed by replacing one Hydrogen atom in methane with a fluorine atom. It is a flammable, non-toxic, liquefiable, colorless gas with a pleasant odor with tetrahedral geometry.