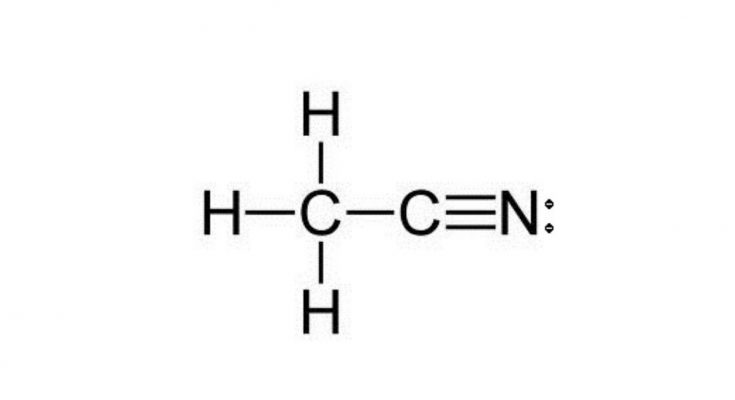 Acetonitrile, also known as methyl cyanide is a colorless organic liquid with an aromatic odor. It is majorly produced as a byproduct during the manufacturing of acrylonitrile. It is used in the organic synthesis of many compounds where it acts as a polar aprotic solvent.

It was first produced by Jean Baptiste Dumas in 1847. It is also a potent air pollutant found in automobile and industrial exhausts.

In this article, we will study the lewis structure of CH3CN along with its geometry, hybridization, and polarity. Read till last.

Lewis dot symbol or lewis structures are the diagrams that demonstrate the bonding between different atoms of a compound, specifying the number of bonds as well as the lone pairs of electrons.

These structures take into account the valence electrons present in all the atoms of a compound. This concept was introduced by Gilbert N. Lewis, 1916.

The diagram is emblematic and uses the chemical symbols of elements to represent their atoms while the dots in the diagram symbolize the lone pair of electrons attached with that atom.

We already know that in an atom, electrons revolve around the nucleus in definite orbits that are known as shells.

The shell farthest from the nucleus is known as its valence shell, which is the outermost orbit of an atom, and the electrons located in this shell are known as valence electrons.

It is assumed that an atom tends to form bonds in order to attain stability. Also, an atom is most stable when it has eight electrons in its valence shell, this is known as the octet rule.

The idea for this rule comes from the electronic configuration of noble gases which are the most stable elements of the entire periodic table and contain eight electrons in their outermost shell, except helium which has two electrons.

Therefore, the atoms bond to complete their octet resulting in the formation of different compounds.

The Lewis structure for CH3CN is given as:

It is visible in the above structure that the octet for all the participating atoms is satisfied. Therefore, it is the correct lewis structure.

Let us now try to understand the making of this lewis structure through a step-by-step process.

In the case of CH3CN:

Number of valence electrons for carbon = 4

• The next step is to choose the central atom for the molecule.

• Now, all the atoms of the molecule are bonded with the help of single bonds.

This step enables us to estimate the number of electrons that are still required by one or more atoms of the molecule to complete their octet.

• The above structure indicates that the octet for all the hydrogen atoms as well as the first carbon atom is satisfied.

However, the carbon atom behaving as central atom, carbon-2, as well as the nitrogen atom still needs two more electrons to complete their octet.

• As both carbon and nitrogen are capable of forming multiple bonds the second carbon atom forms a triple bond with the nitrogen atom, hence, satisfying the octet for all the atoms present in the molecule.

Also, a lone pair of electrons is left with the nitrogen atom. The final Lewis structure for acetonitrile looks like this:

• But wait, how do we know that the structure we have drawn is correct?

To ensure that we have derived the correct structure for a molecule there is another concept called formal charge.

It is a theoretical idea as per which the formal charge for all the atoms of a molecule is calculated individually and the diagram is considered correct if the value of the formal charge is close or zero or even better zero itself.

• The formal charge for an atom is calculated using the following formula:

• Now, calculating the formal charge for different atoms of CH3CN:

As the formal charge on all the atoms is 0 when calculated individually, the total charge on CH3CN also becomes 0 indicating this to be the best possible lewis structure for the molecule. 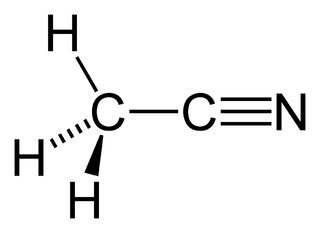 The molecular geometry of a compound is the arrangement of its atoms in space.

It is the three-dimensional positioning of its atoms that is determined by the bonding and non-bonding electrons present in that compound around the central atom.

The molecular geometry also takes into account other factors such as the bond angles, bond strength, etc.

The Valence Shell Electron Pair Repulsion (VSEPR) Theory provides the postulates for determining the molecular geometry of any compound.

We already know that all the electrons carry a negative charge and also that like charges repel each other.

Therefore, the electrons inside a molecule repel away from each other. As per VSEPR theory, the three-dimensional shape of any molecule is determined by these inter-electronic repulsion forces working inside the molecule.

The VSEPR theory further states that the electrons inside a molecule tend to position themselves as far as possible from other electrons to avoid inter-electronic repulsion, thus, try to decrease the energy of the molecule and make it stable.

The lewis structure of a molecule helps us determine the number of bond pairs and lone pairs present in that molecule.

As per the lewis structure of CH3CN drawn in the earlier section carbon is the central atom for the molecule.

As there are two carbon atoms in this molecule it may have two different shapes depending on which carbon atom is chosen as the central atom.

Again looking at the lewis structure of CH3CN:

Considering the AXN notation, this structure resembles the AX4 formula where A is the central atom and X symbolizes the bonded group.

N in the notation refers to the number of lone pairs present on the central atom which is 0 for the CH3CN molecule.

In this case, the electron geometry of the molecule is also tetrahedral and the bond angle between different atoms is 109.5°.

This resembles the AX2 formula from the AXN notation. The electron geometry of the molecule is also linear with a bond angle of 180°.

The AXN notation chart for different generic formulas is given below: 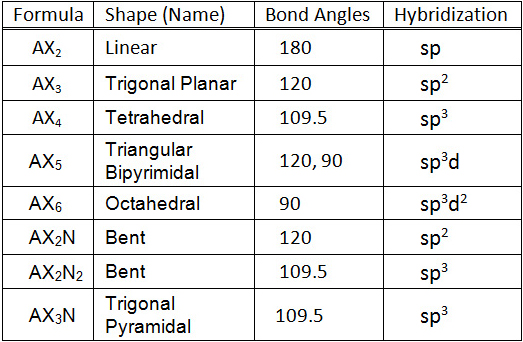 The process of the formation of hybrid orbitals due to the intermixing of orbitals having similar energy levels is known as hybridization.

The hybridization of any molecule is determined by calculating the steric number for that molecule.

As per VSEPR theory, the steric number is the number of atoms bonded to the central atom along with the lone pairs.

It is given by the formula:

As discussed earlier in the case of the CH3CN molecule any of the carbon atoms can be chosen as central atom, therefore, two hybridization states are possible for this molecule. 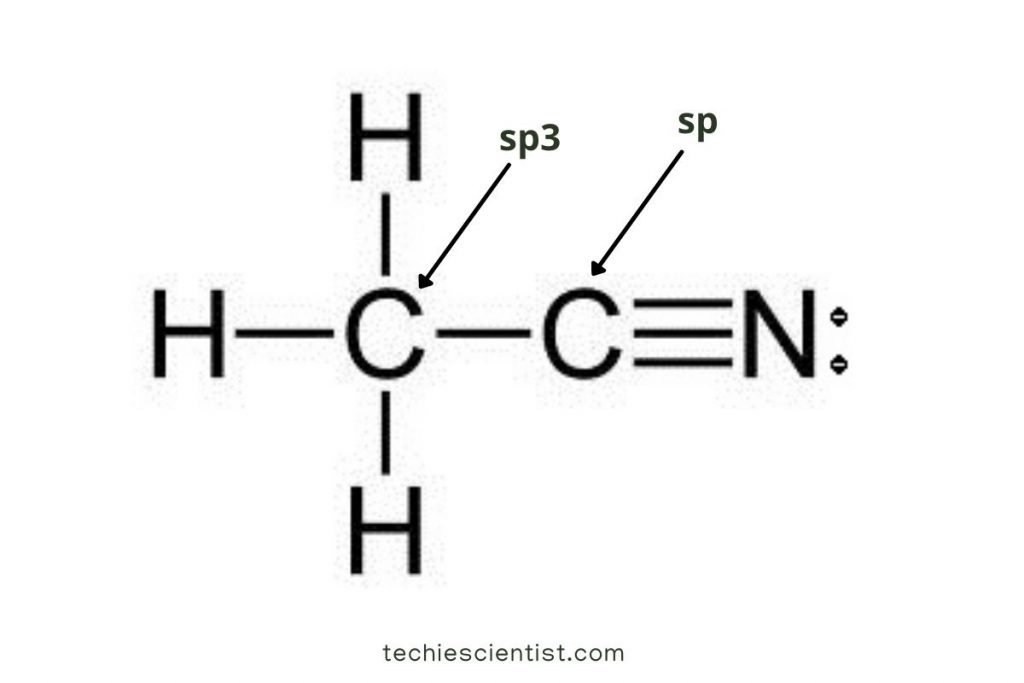 Therefore, the hybridization for this molecule becomes sp3.

Hence, the hybridization for the molecule becomes sp.

The following chart describes the relation between steric number and hybridization state:

Polarity is the existence of two opposite poles in a molecule i.e. a positive and a negative.

These poles develop due to the difference in electronegativity of the bonding atoms amongst which the more electronegative atom attracts the electron more towards itself, thus developing a slight negative charge, while the other atom acquires a slight positive charge.

The acetonitrile molecule is polar owing to the difference in the electronegativity of carbon and nitrogen atom due to which a slight negative charge develops on nitrogen while a slight positive charge on the carbon atom.

The dipole moment of CH3CN is 3.5 Debye. 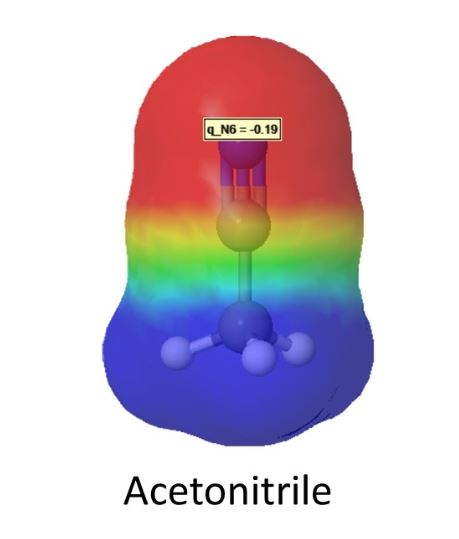 A few important properties of CH3CN are given in the table below:

• As a solvent in the purification of butadienes.

• In preparation of DNA oligonucleotides.

• The lewis structure of CH3CN is: 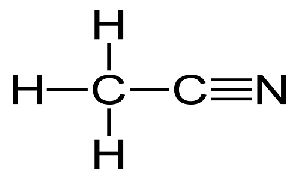 • Similar to the molecular geometry there are two hybridization states possible for the CH3CN molecule.

• The dipole moment of the CH3CN molecule is 3.5 Debye.