When stuck in a storm we run to a safe place like a shelter or a building to avoid being hit by lightning. We have heard many experts say that if there is no building nearby during lightning or thunderstorm then a car could be a safer option. How far is that true? Are cars really safe?

So, can lightning strike a car? Yes, cars are more likely to get hit by lightning but can also serve as a protective shield for people inside the car. When lightning strikes a car, it hits the outer metal surfaces like the antenna and the roof and moves along with the metal frame. Electricity chooses the path that offers the least resistance which is the metal frame that diverts the lightning around the car and discharges it safely to the ground. So, one can be absolutely safe inside a car.

Although cars provide safe shelter during lightning they are not the safest option. Taking shelter under a tough-roofed metal vehicle can protect you from lightning as the metal diverts the current outside the car keeping the inside free of any danger.

You need to understand how the whole thing works to turn your car into a safe shelter during storms.

What happens to a car during lightning?

Ninety percent of the lightning discharges occur between clouds or within the same cloud and only a few discharges hit the ground (cloud-ground) mostly causing little or no damage.

The lightning strikes vary in the magnitude of electricity they hit with. The strikes can be low-energy, medium-energy or high-energy. The three can affect the car and the occupants differently.

Low-energy strike: These strikes are very less damaging in nature and easily dissipate through the body of the car into the ground below. These leave little or no damage to the car. Low energy strikes are more common.

Medium-energy strike: These strikes can have slight damages to the car’s body. These can cause the melting of metal, fuse burning, gas tank explosion, minor electric sparks and marks on the car surface.

High-energy strike: If these strikes occur, the car can catch fire or may explode. This can inflict heavy burns on the occupants and sometimes death due to cardiac arrest. Fortunately, these strikes are too rare to happen.

Can a car withstand lightning?

Vehicles made of metal or conducting surfaces, when hit by high-frequency lightning, carry the currents on the exterior. For instance, a thick copper wire or a hollow metal pipe in an electric field will carry the charges on their outer surfaces.

This is known as “skin effect”. The same happens when lightning strikes an enclosed metal vehicle. Most of the electricity is distributed on the outer surface of the vehicle making its way down to the earth’s surface through the rubber tires.

The above phenomenon can work only under certain conditions. The car should be made of conducting surfaces. If the car is made of fiberglass or plastic (bad conductors of electricity) then the lightning can destroy the car by igniting a fire.

Cars that have convertible roofs or have cracks will fail to show the skin effect and will serve no purpose as a shelter during a thunderstorm.

It is a common belief that rubber tires of a car provide insulation against the lightning current. However, rubber tires do not have any role in preventing strikes other than passing the current from the car’s metal frame to the ground below.

Rubber tires fail as insulating objects because they remain incapable of presenting enough resistance to the lightning bolt.

They provide zero safety from lightning. Lightning travels miles of the area from cloud to the ground against the air resistance and a few inches thick rubbers are too thin to resist that energy.

Jeeps that have soft tops or vehicles with a convertible roof do not act as Faraday cages and can get you electrocuted if you are inside them during lightning.

Riding bicycles, roofless vehicles, and motorbikes can put you in terrible danger as they are more susceptible to lightning strikes.

Metal buses can act as good Faraday cages and protect the passengers if all windows and doors are closed and the hands-on-lap rule is followed.

Lightning strikes usually damage the antenna, tires, windows and rear windshield of a car. The heat from the strike can melt the vehicle antenna by causing small explosions or sparks of burnt metal.

This discharge, if it makes way to the electrical system, can damage the car electrical components completely rendering it inoperable.

The lightning can also pass through the fine wires entrenched in rear windows and shatter the window glasses.

A lightning strike can burn the whole electronic control system of a car, fuse the circuits, burn and melt the radio antennas and in worst and rare cases, it can spark a fire causing harm to the occupants. It is also possible that the lightning may never enter your car at all.

Even though lightning can hit your car and cause heavy damages, you should get inside the car than being outside of it when caught in a storm.

Can you get electrocuted in a car? 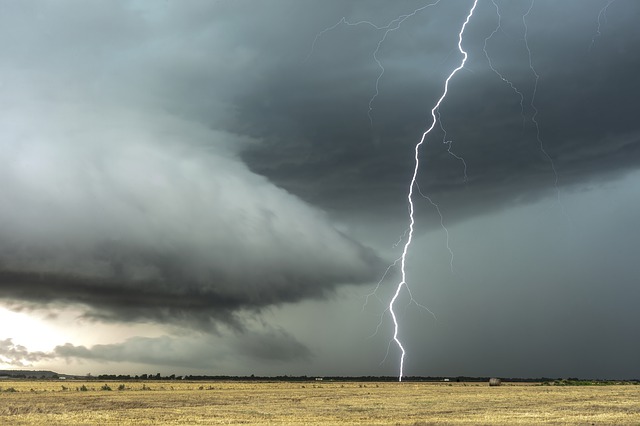 At times, the electricity from a lightning strike can enter into the car through wires and conductive surfaces which causes a lot of damage to the car and also to the occupants inside. A lightning bolt on an average is five times hotter than the sun’s surface and can potentially burn and melt anything that it strikes.

As explained earlier, the metal framing of your car will redirect the electric charges around the exterior of the car’s compartment. Let us understand Faraday Cage with a good example.

An experiment was conducted where a man was allowed to stand inside a conductive metal cage. Thousands of volts of electric current was then hit on the surface enclosing the man.

The man inside remained safe even after minutes of discharging electric current. This happened because the electricity was channeled by the metal cage around the outside of the cage and then directly into the ground where it dissipated.

What if the cage was made of a less conductive material or any insulating material? If that was the case, the man inside would most likely get electrocuted. This is the reason why only metals and other conducting surfaces on vehicles form a protective shield against the strike.

A car has to be fully enclosed, metal surfaced, hard roofed and dry on the inside to eliminate the risk of getting electrocuted during close-in lightning events.

How do you know if your car got struck by lightning?

The lightning sometimes does no damage to the car. One can look for the following signs to know if their car got struck by the lightning.

The car engine can shut down any moment as the lightning current can pass through the car’s electrical system and burn the wires.

One or all the four tires of the car may blow out.

The internal parts of the car including the conductive surfaces and electrical wires can get damaged as soon as the lightning strikes.

The electrical circuits and control system will cease to function.

With damage to the electrical system, the airbags get triggered.

The car’s outside surface may have marks of burn, melted parts and shattered windows.

External damage may occur to the car due to stones on the road which were hit by lightning.

How to be safe in a car during lightning?

If your car is made of metal with a tough roof that is not convertible then it can serve as the best place to hide inside during a thunderstorm. You need to take care of a few things when choosing a car as a shelter.

If you are driving then pull over and turn off the car’s engine. Turn on the hazard lights and sit with your hands on the lap.

Shut the doors and windows of the car.

Switch off your phone and other electrical appliances that you have with you inside the car.

Wait for the lightning to stop and better not touch anything with bare hands once this is over.

Look for help from outside and if no help arrives, try to open the doors using a dry insulating object like a plastic.

Under no circumstances should one step out of the car during lightning to look for other shelters.

When your rescuers arrive, sign them and inform them that your car has been struck by lightning.

In worst-case scenarios, a high energy strike can light a fire in your car and you should immediately move out of your car to anywhere far, even if the lightning persists.